The morphologic changes in the wall of the human urinary tracts after direct electro pulse exposure: the in vitro research

In the recent decade during the urolithiasis treatment the accent is made on the usage of modern low-invasive approaches like endourologic methods, mainly retrograde contact lithotripsy (RCL) [1-4]. In 2006 the electro pulse method which was offered as a new way of contact lithotripsy, which looked like splitting up the nephrolith by the exposure of the solid body by the electro pulses of nanosecond duration [5]. The radical difference of the new lithotripsy method from the highly effective, but unsafe because of high pulse power, electrohydraulic RCL and remote lithotripsy (RL) [6,7], is exposure on the nephrolith surface, not on the fluid environment with the shockwave creation, affecting the stone. According to the experimental research data, carried out on the analogous nephrolith models, the change of solid body exposure pattern from mediated to direct allows to decrease power and number of electrical pulses, required for the effective lithotripsy, significantly [8].  The destruction of solid bodies with the same density by the means of electrohydraulic RCL required exposure by multiple pulse series with the power of 1.85 J, whereas in case of electro pulse RCL the single pulses with the power 0.1-0.45 J were enough; so, the minimal effective pulse power of electro pulse destruction method is 10 times lower that of the electrohydraulic RCL (0.1 and 1.0 J respectively). That allowed us to expect high level of clinical safety of the new method. At the same time, it is known that the higher the pulse power, the lower is crushing efficiency and time required for the stone destruction. In connection with that, for theelectro pulse RCL method clinical usage it is reasonable to estimate that maximum pulse power which is safe at the same time.

In order to study the morphologic changes, happening in humanurinary tract wallafter direct electro pulse exposure, the surgical material obtained from the patients who had any operations on their pelvis, ureter or urinary bladder, leading to organ resection or removal. Thekidney pelvis, ureter or urinary bladder material, obtained interoperatively was divided into fragment right after extraction and put in the Petri dishes, filled with 0.9% sodium chlorides solution and single electric pulses of nanosecond duration were carried out directly on the mucous tunic.

The contact electric exposure was carried out by means of the probe of electro pulse “Urolit-105M” lithotriptor (Lithotech Medical, Israel; Medline Ltd, Russia). The pulse power during the exposure on kidney pelvis and ureter was 0.8 J (15 fragments of each organ) or 1.0 J (10 fragments of kidney pelvis and 18 ureter fragments), during the exposure on urinary bladder – 1.0 J in all cases (20 fragments). The number of electric pulses was varied in the range from 1 to 20 (1-3-5-10-20) for each localization. The fragment distribution of fragments depending on power and number of pulses summary table is introduced in the Table.

Table. The distribution of number of observed urinary excretion fragments with regard to power and number of used pulses

n – is the number of fragments used.

After finishing the electro pulse exposure, the fragments were put into marked vials and fixed into 10% neutralformalin solution. In the lab every tissue block was passed through the spirit battery, orientated on the wooden bar with its longitudinal (long) axis parallel to the latter’s side, and then covered with paraffin according to conventional methods. The slices no more than 5-8 micrometers thick, made up from the paraffinized tissue block, were dyed with hematoxylin and eosin. The microscopy was conducted Micmed-2 microscope (Lomo, Saint-Petersburg, Russian Federation) with the magnification of 1:100 and 1:250.The pathomorphologist, conducting histologic research, did not have information about the pulse, any of the fragments was exposed, number and power.

The kidney pelvis wall proved to be the most resistant to electro pulse exposure. During the exposure by 1-10 pulses with the power of 0.8 J (Figure 1 A), epithelium desquamation without leaving thebasic membrane borders was detected, during the exposure by 20 pulses of the same power, the capillary dilatation was detected (Figure 1Б). Only exposure by 20 pulses with the maximum power of 1.0 J lead to changes out of urinary tract borders, such as singular hemorrhages in parapelvic cellular tissue (Figure 1B). The ureter wall was less resistant to direct electro pulse exposure than the pelvis wall.With the pulse power of 0.8 J and pulse number no more than 5, the changes affected not only mucous tunic, but sub mucous layer as well, which was reflected as sub mucous layer edema (Figure 2). The exposure by 20 pulses of the maximum power (1.0 J) led to morphologic changes in the muscular layer, up to its dissociation. The urinary bladder wall proved to be the most vulnerable to direct electro pulse exposure. The electro pulse exposure, even by a singular pulse with the power of 1.0 J lead to sub mucous layer edema and collagenous fibres fragmentation (Figure 3 A). The exposure by 5 consecutive pulses led to damaging not only epithelium andsub mucous base, the muscle layer as well (Figure 3 Б), which reached the maximum in case of increase of pulse number to 20, accompanied by vessels walls disruption (Figure 3 В). 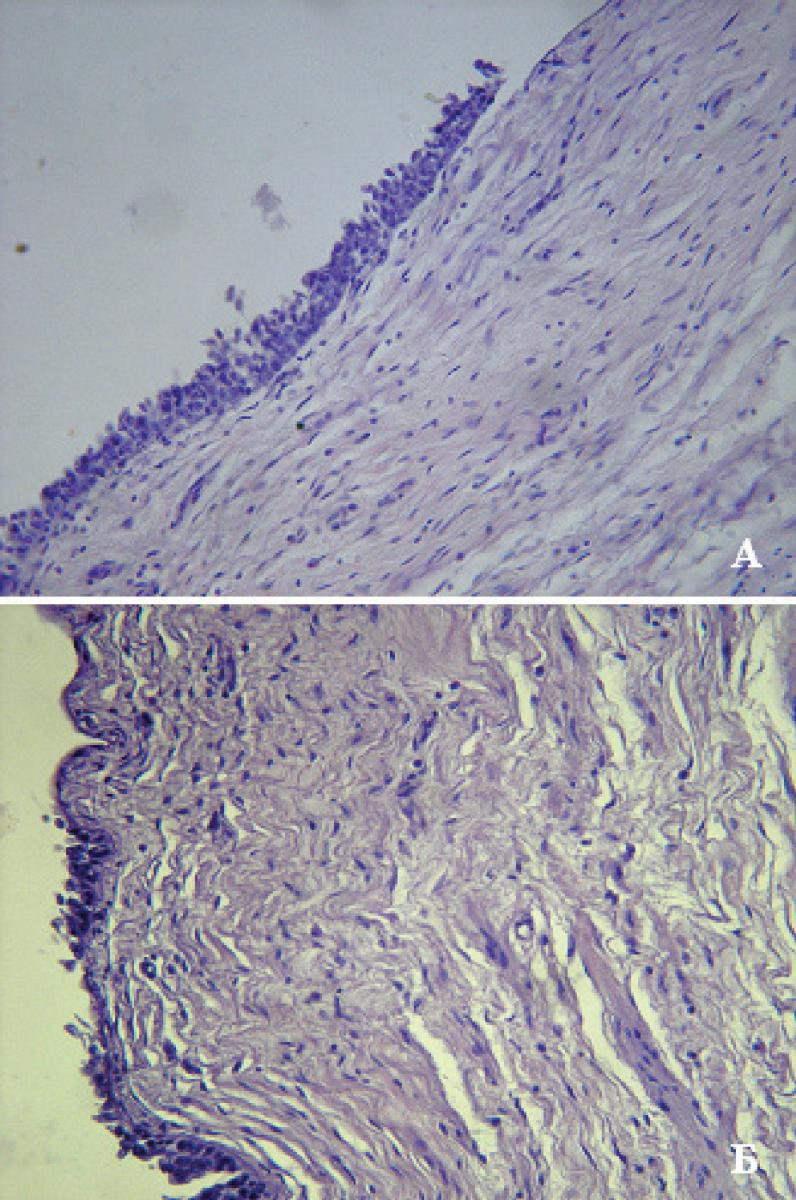 In order to shift from experimental research toelectro pulse RCL clinical applicationwe had to identify optimal pulse power. On one hand, it had to be sufficient for maximal effective and quick nephrolith crushing. On the other hand, it had to avoid urinary tracts wall total damaging and perforation, even in case of electrode’s end slipping-off from mucous tunic surface to the nephrolithduring the pulse exposure. Planning the research design, werelied on experimental and clinical facts, obtained earlier, notably: during the experiment the new electro pulse RCL method demonstrated high effectiveness in analogous sand-cement mixture stone models destruction, including the samples consisting of 100% cement, during the singular pulse exposure with the power of 0.1 to 0.45 J [8, 9]. Such pulse power is comparable with the power of pulses, generated by the most safe RCL types, the pneumatic and laser ones (0.1 – 0.14 J and 0.12 – 0.5 J, respectively) [1, 4, 6, 7, 10].

It was ascertained during the numerous research that the higher the pulse power, the higher will be the crushing effectiveness and the lesser will be the time, needed for lithotripsy. The most efficient, although the most dangerous lithotripsy method – the electrohydraulic one, leading to ureter perforation (up to 17%) quite often, has pulse power of 1.0 to 1.85 J [1, 8]. Hence, it would be logical to assume that the safe level of pulse power in case of electro pulse RCL should stay in the range from from 0.1 to 1.0 J.However, the closer the power lever to 1.0 J, the higher will be the method efficiency. In thedog research, conducted earlier, it was demonstrated that directcontact electro pulse exposure by the pulses with the power of 0.1-0.7 J on the ureter and urinary bladder wallleads to morphologic changes, not leaving the borders of muscular layer and considered completely safe [8]. At the same time, the exposure by the pulses with the power of 0.8 to 1.0 J, causing changes in all in all ureter wall layers can be potentially dangerous and if the pulse power equals 1.0 J it may lead to wall perforation in individual cases. Since, the data obtained from animals and humans are not always absolutely concordant, in the current research we rejected pulse power range 0.1 – 0.7 J, safe for dogs and studied morphological changes in human urinary tracts wall, occurring with pulse power range 0.8 – 1.0 J, relatively dangerous for dogs. As, the endoscopic contact exposure on undamaged human mucous tunic on this stage of method introduction could not even be considered for ethical reasons, we used pelvis, ureter and urinary bladder intact fragments, taken from the patients who had resection operations on their urinary tracts performed according to clinical evidence.

During this research we found out that direct electro pulse exposure, exposed on isolated pelvis, ureter and urinary bladder fragments by the pulses with the power of 0.8 to 1.0 Jin quantity from 1 to 20 did not lead to urinary system organs wall perforation. The kidney pelvis where the morphologic changes like epithelium desquamation, basal membrane disorganization, capillary paretic expansion and edema, did not leave sub mucous layer borders even after exposure by 10 pulses with the power of 1.0 J sentin one point, proved to be the most resistant to electro pulse exposure. In the fragments of ureter and urinary bladder analogous changes occurred after exposure by 5 pulses with the power of 1.0 J and after 10 pulses with the power of 1.0 J there were changes restricted by the muscular layer, but still not affecting adventitia. Such different kidney pelvis, ureter and urinary bladder resistance to electro pulse exposure can be explained by organs’ anatomic difference and their walls structure patterns. The conditions designed by us exceeded the real threat which can be created by the method significantly, because it is impossible to assume that the probe will be regularly slipping-off the stone and that it will be slipping-off at the same point in case of pelvis and urinary bladder and very unlikely in case of lithotriptor, which is tightly fixed in ureter.The special feature of that research is that the result of any exposure – the electro pulse as well – on the living organ, having blood supply and innervation, and its fragment, even if it was removed, but not heaving blood supply already, can be slightly different.Nevertheless, the acquired data may be used as a basis, because electro pulse exposure was carried out directly in the operating room, and the time elapsed between new fragment extraction and pulses exposure did not exceed 1 – 2 minutes, after that the material was preserved in formalin. However, considering relatively small electro pulse RCL usage period in case of urolithiasis in most of hospitals, it will be reasonable to start the method development from the pulse power no more than 0.7 J, absolutely safe even in case of direct contact with the urinary tracts walls [9]. Only, after obtaining enough clinical experience of manipulation with lithotriptor probe and stop-filters, helping to fix the stone during the lithotripsy process, the exposure power can be increased to 1.0 J.

1) The contact electro pulse exposure on pelvis, urinary bladder and ureter mucous tunic by 10 pulses with the pulse power of 1.0 J each is safe and does not cause morphologic changes out of muscular layer borders.

2) The contact electro pulse exposure by the pulses with the power of 0.8 J to 1.0 J from 1 to 20 pulses does not lead to urinary excretion system organs’ walls.

Conflict of interest: none declared