romj-2017-0104.pdf
Abstract:
The individual variability of morphometric parameters of feet in 18-19 year-old girls (Saratov region, Russia) with different somatic types is examined. Materials and Methods ― 240 18-19 year-old girls (the students of Saratov State Medical University n.a. V.I. Razumovsky, the locals of Saratov region) were examined during the annual special medical examination. The somatic type’s identification of the examined girls was conducted in accordance with B.A. Nikitiuk and A.I. Kozlov (1990). The examination of the foot type was performed with planthogram. During the research the shape of feet (Egyptian, Greek, Roman), the frequency of its occurrence in somatic types was determined. Shriter index, which characterizes the height of the arch of the foot and Veysflog index, which characterizes the spring function of the foot, was calculated. Also, the frequency of occurrence in the arches of the foot somatotype and its various forms were determined. Results and Conclusion ― The most common form of Egyptian foot is typical of women with mezomorphic hypotrophic and brachymorphic normotrophic somatotype; Roman foot – for brahimorphic hypertrophic and brahimorphic hypotrophic somatotypes; Greek foot – for dolihomorphic gipotorophic and brachymorphic hypertrophic somatotypes. High arch is common for Greek foot in the brahimorphic hypotrophic somatotype; elevated arch – for Roman foot in dolihomorphic normotrophic somatotype; flattened arch – for Egyptian foot in dolihomorphic normotrophic somatotype; platypodia - for Greek foot with brahimorphic hypotrophic somatotype. The foot of all forms and heights of the arch possesses a good spring function.
Keywords:
somatotype, shape of feet, height of the arch, foot spring function
Cite as:
Muzurova LV, Kochelaevskaya IE. Individual variability of morphometric parameters feet of girls 18-19 years from Saratov region of the Russian Federation. Russian Open Medical Journal 2017; 6: e0104.

The examination of individual anatomical variability of musculoskeletal system structures has practical value for the solution of many problems of preventive medicine, orthopedics and traumatology [1, 2]. In this respect, the foot, which is a finite and highly differentiated element, plays an important role.  The foot is a spring unit for easy walking, determining its smooth, absorbing swing and body vibrations [3]. Standing daily constant physical activity of different duration and intensity, the foot reacts with the active resistance to preserve its anatomical integrity and biomechanical functionality [4, 5].

Slight structural changes of the foot, leading to its deformation, break complex kinematic chain implementing the agreed activities of the bones, joints and muscles. This can lead to the dystonia of the skeletal muscles, the appearance of pain, the appearance of calluses, corns, ulcers.

According to medical statistics, residents of the developed countries suffer from flat feet more often than the citizens of the developing countries. For example, in Europe and in America to 70% of people have some degree of flatfoot, and in India this defect occurs in only 4% of patients. In this aspect of the study of the morphology of the foot, cosidering its physical form and the individual type, acquires practical importance, as it is quite difficult to distinguish between all the options of foot norms and the initial stages of its deformation.

The purpose of this study is to examine individual variability of morphometric parameters feet of 18-19 year-old girls in Saratov region (Russia), with different somatic types.

Body morphometry examination was performed on 240 women 18-19 years old who are the students of Saratov State Medical University n.a. V.I. Razumovsky (Saratov, Russia), and who are indigenous inhabitants of Saratov region of the Russian Federation. Measurements were conducted during thorough annual medical examination of students in the university polyclinic in compliance with the principles of voluntary participation, individual rights and freedoms guaranteed by Article 21 of the Constitution of the Russian Federation.

Foot morphometry was performed with planthogram. The processing was done by drawing the scheme.

By the length of the fingers there were determined three types of feet:

Shriter index, which characterizes the height of the arch of the foot, was calculated. On the Plantogram the tangent line (AB) is drawn to the most salient points of the inside of print A, from the middle of which the perpendicular to the intersection with the outer edge (VD) print and perpendicular between the outer and inner edges of the print (GD) are erected (Figure 1). 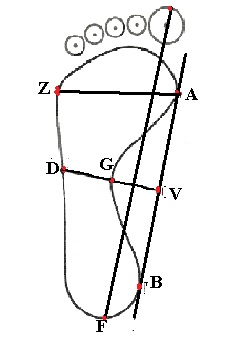 The shape of the foot is determined by the index:

According to the meaning of the Shriter index, all feet were divided into the following groups:

Weisflog index representing the ratio of the length of the foot to its width was calculated. The length of the foot was determined on the plantogram from the point F to the end of the longest toe; the width of the foot – on the I-V level of metatarsus-phalangeal joints (AZ line). In the most common cases, W index is between 2 and 3. The meaning approaching "2" indicates the transverse platypodia, whereas the meaning nearing "3" shows an ideal foot cross-linking and is a good indicator of its spring function.

The obtained data was processed by statistical analysis. The differences between frequencies were considered reliable at 95% (P<0.05) probability threshold (based on t-test). The variation of anthropometric parameters was evaluated by coefficient of variation (CV). The variation was considered weak if CV does not exceed 10%, the average – when CV was 11.0-25.0%, and significant if CV>25.0%. When was CV>50.0% the distribution was considered asymmetric. All combination options were preprocessed for "pop-up option" [8].

The following frequency of foot morphological types in 18-19 years-old women without considering somatic type is: the most common is Egyptian foot (42.8%); less common is Roman foot (7.0% less); the rarest is Greek foot (2 times less than Egyptian) (Figure 3). 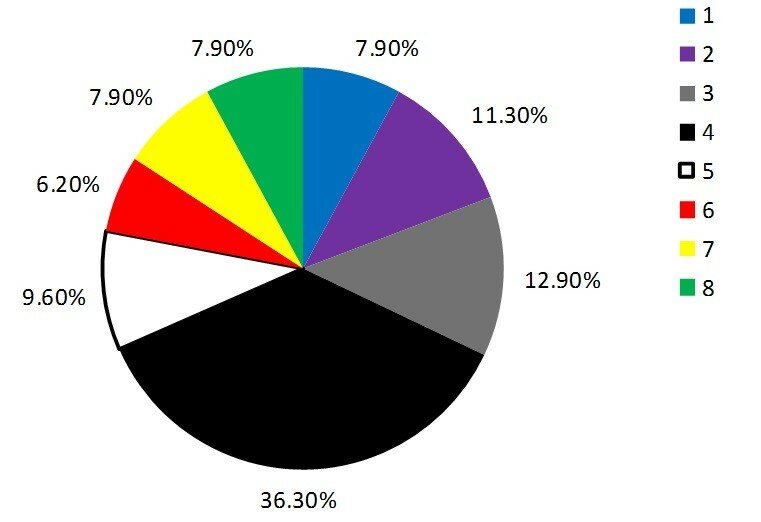 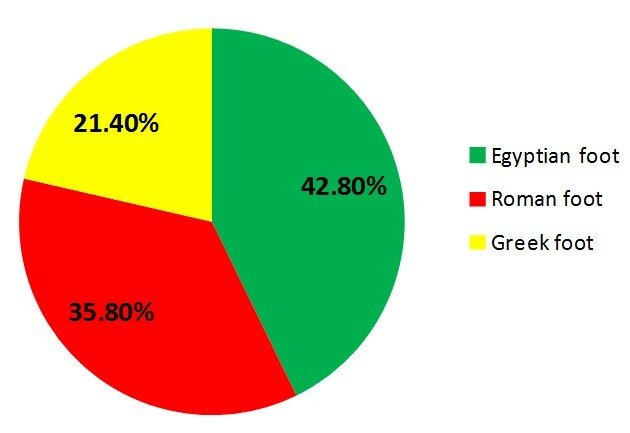 Figure 3. The frequency (%) of morphological types of feet in 18-19 years-old girls.

Table 1. The frequency of foot morphological cases among women of different somatic types

Table 2. Shriter Index of women in the joint group considering the somatic type

In the joint group of girls 18-19 years old and among all somatic types Weisflog index tends to the meaning "3", which indicates the normal foot spring function.

Table 3. The frequency of foot arches considering the foot types

Table 4. The frequency of foot arches in various somatic types

The analysis of the foot arches frequency occurrence has shown that the girls of dolihomorphic hypotrophic somatotype mostly have a normal foot arch height. The normal height is determined on the right side more often than on the left in 10.48%. This difference is statistically significant (P<0.05). Raised arch and high arch are determined more often on the right side than on the left (in 2-fold (P<0.05) and 5.26% (P>0.05). Flattened arch and platypodia are common for the left side (in 2-fold and 10.5%, respectively (P<0.05).

Combined volatility of Weisflog index with height of foot arches has shown that in all groups the index approaches the meaning "3", which is an indicator of good spring function of foot despite the identified changes in the height of the arches

The functional diagnostics is one of the leading trends in the health system. It is aimed not only at making exact diagnosis and evaluating undertaken therapeutic treatment, but also at the timely detection of individual variability combinations, which can initiate the forthcoming pathology. The timely detection of predisposition to the feet anatomical changes among the girls of different somatic types considering their feet shapes and early preventive measures will reduce the risk of the beginings of spine diseases, of the formation of irregular pelvic shape and, as a consequence,of  the viscera dislocation.

Our research evidences a high frequency of the normal foot arch cases (up to 35%). What is more the obtained data considers not only the shape of foot, but also the somatic type of the examined girls.

All forms of feet and its arch height variability indicate its good foot spring function, testifying to the normal physical load distribution.