Pancreas is one of the most inaccessible organs, lying so deep within the abdominal cavity, makes it often difficult to confirm the diagnosis. Thus, management of pancreatic disease remains a major challenge even in the XXI century. The advances of the surgical field made possible procedures on the pancreas that are more complicated. This requires detailed knowledge of anatomy of the region and its possible anomalies to prevent misdiagnosis and intraoperative complications.

Anomalies and variants of development of the pancreas are relatively frequent. In general, there are three groups of pancreas anomalies. The first group includes the migration anomalies (ectopic pancreas and annular pancreas), the second group – fusion anomalies (pancreas divisum) and the third group are anomalies that affect the number and form, or only the configuration of the main pancreatic duct (bifid ducts) [1]. Variations of forms, position, direction and vascularization of the pancreas are also frequently encountered, although are usually not included within these three categories.

Bifid pancreas tail is a rare developmental variant. There are only a few case descriptions of it in the literature. There were also no reports of significant vascular variations associated with bifid pancreas tail. The knowledge of such a case is important for diagnostic and surgical procedures, since it can lead to misdiagnosis in clinical practice. 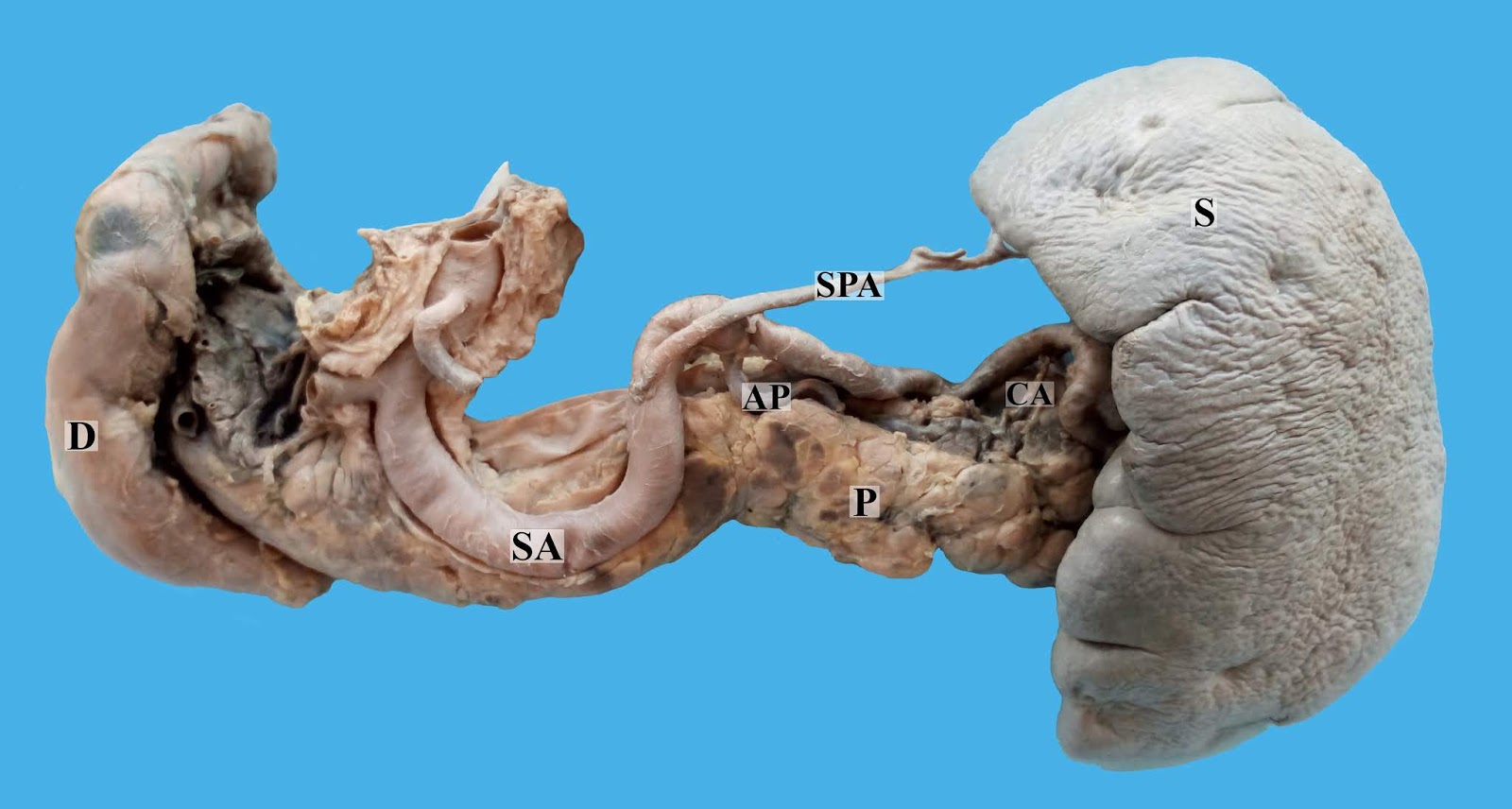 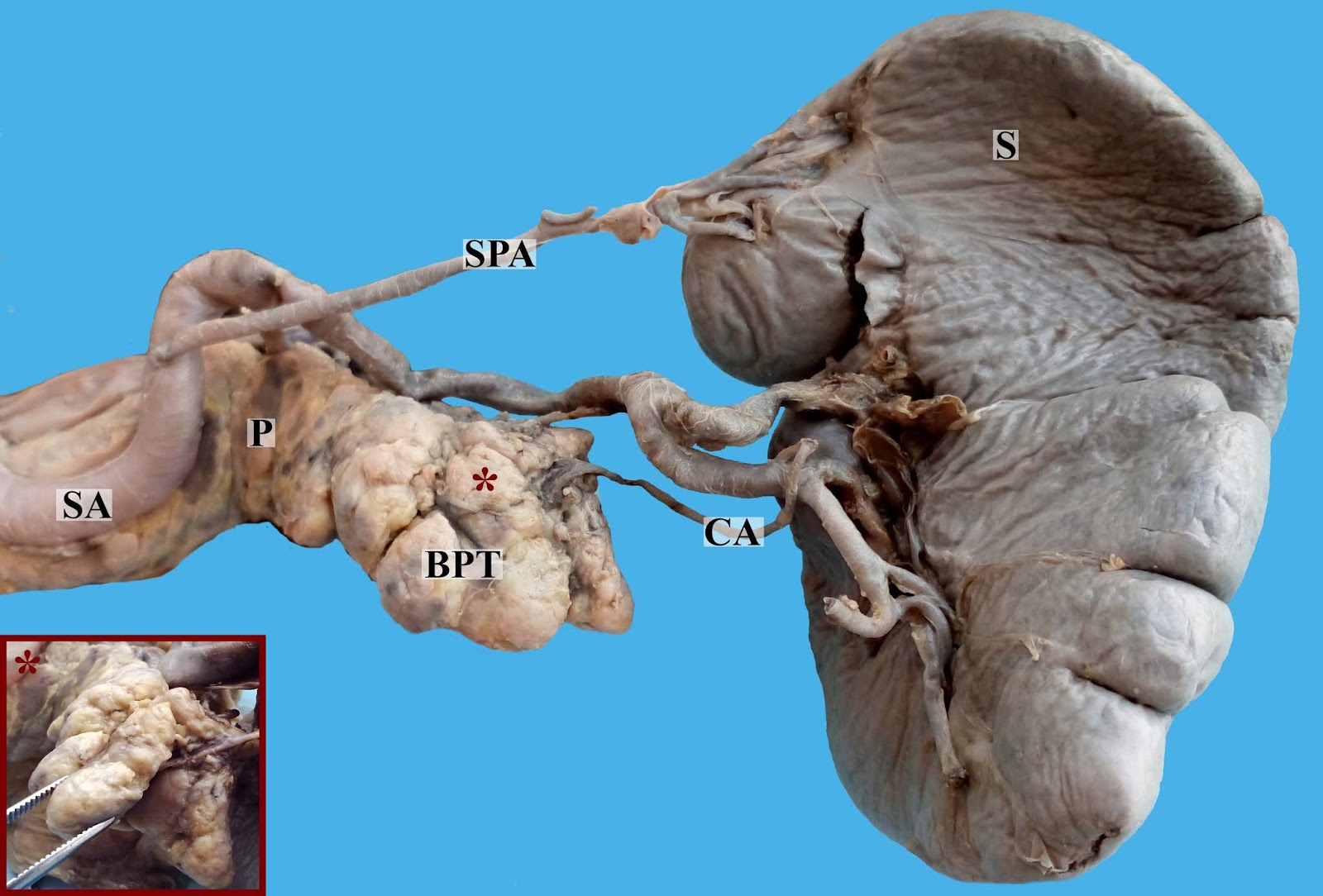 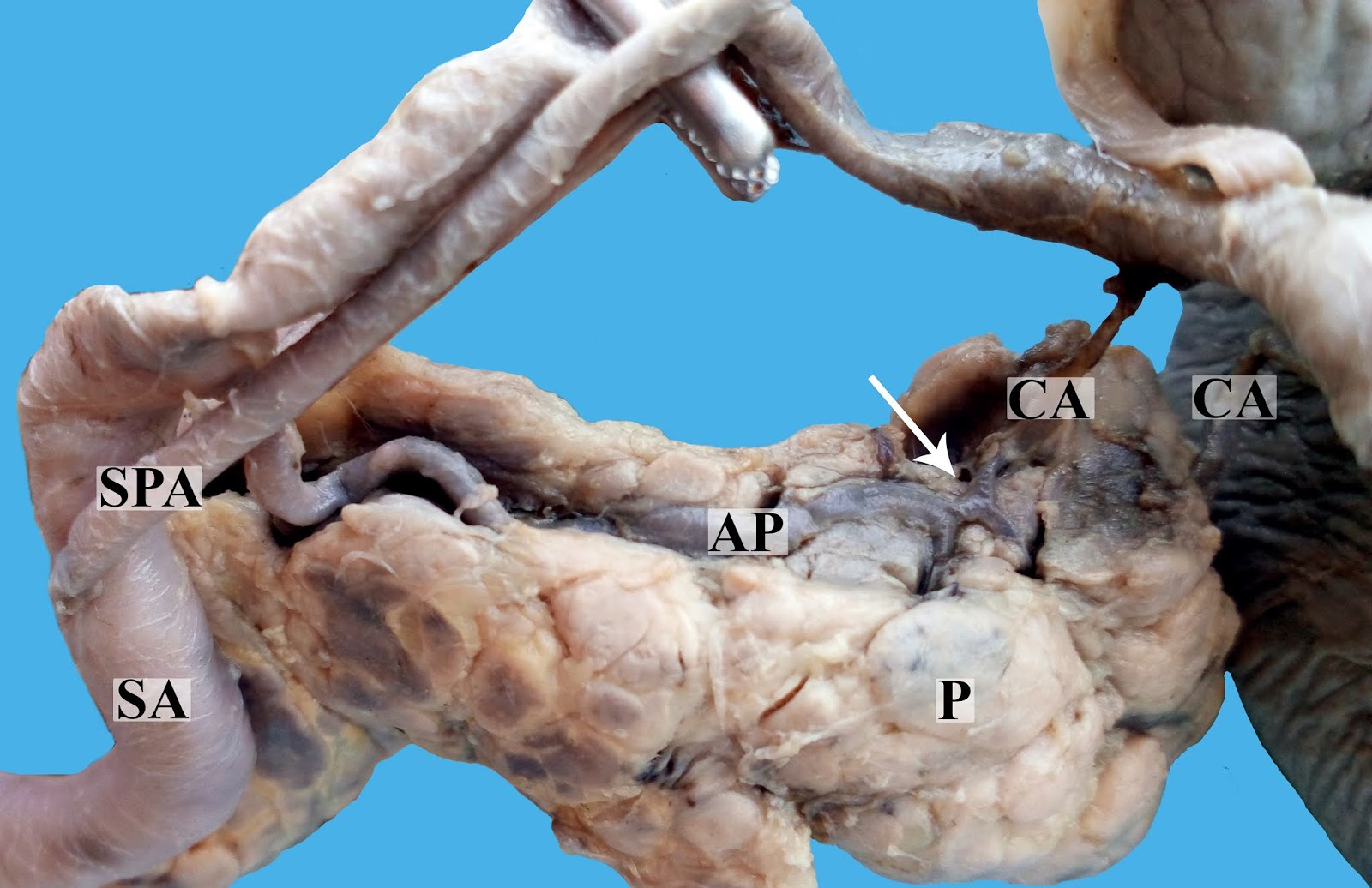 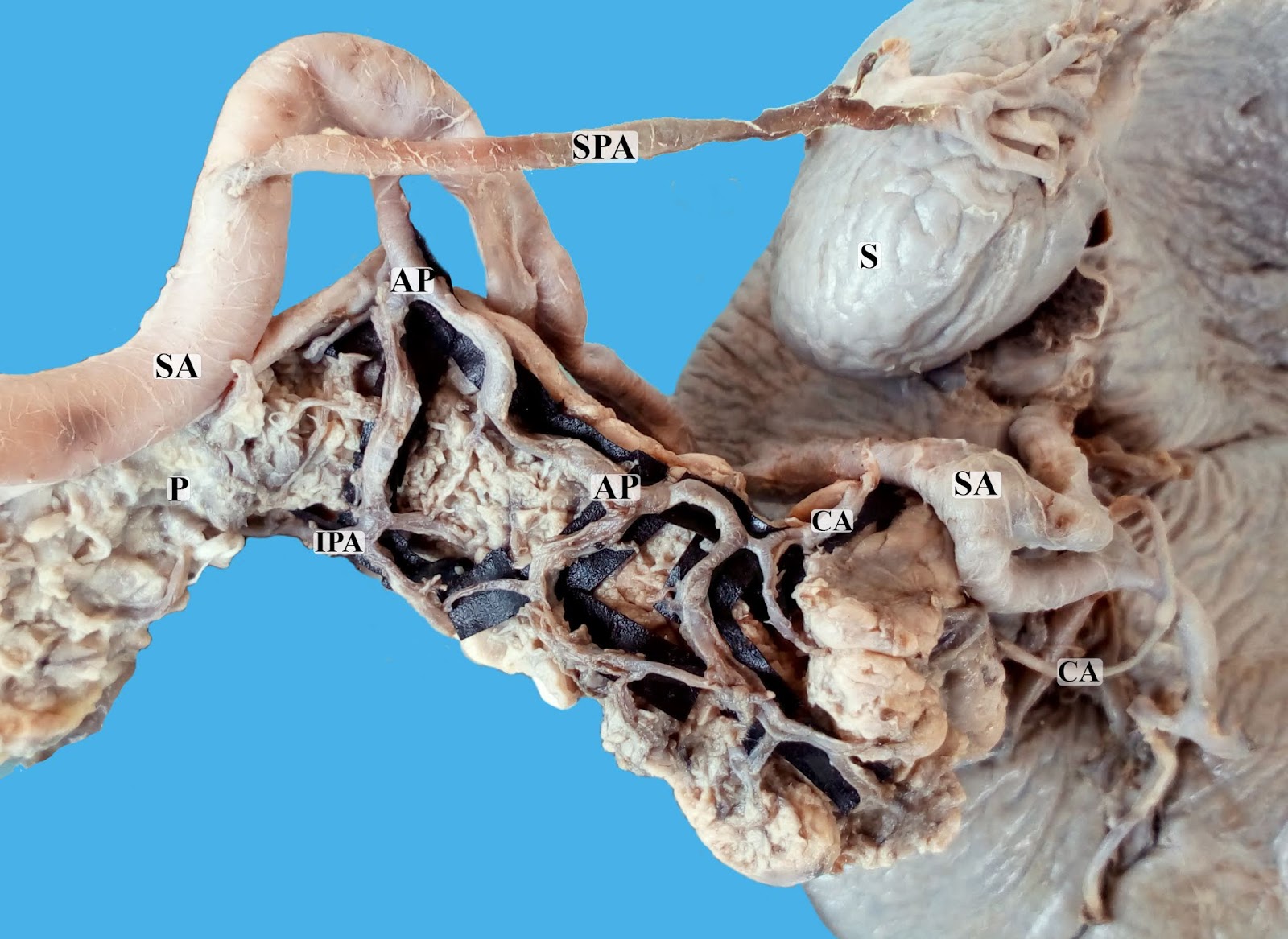 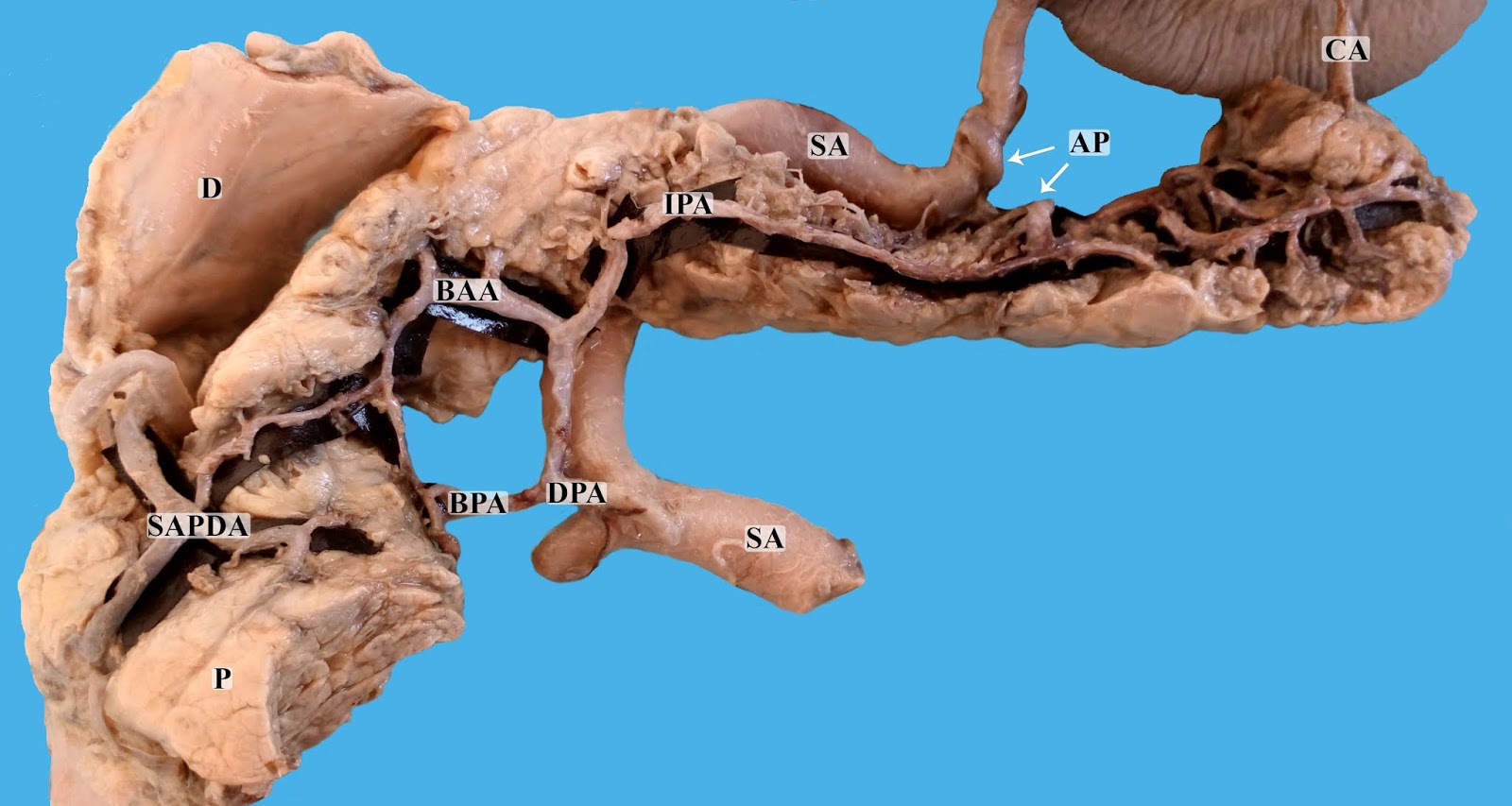 The main pancreatic duct at its beginning measured 0.5 cm and the accessory pancreatic duct 0.2 cm. At the level of the tail, the duct divided into three branches: one drained the left tail, the other – the right tail and the third – the intermediate pancreatic tissue between the tails (Figure 6).

The spleen measured 7.4*4.3 cm in length and width, respectively. The splenic artery gave of one superior polar artery and ended up branching into two arteries of the first order. The inferior branch of the first order gave of an artery to the tail of the pancreas, which entered the gland between the two tails and anatomized with the branches of superior horizontal pancreatic artery of Popova (Figure 2).

Normal embryologic development of the pancreas is thought to begin approximately 5 weeks as two budlike outgrowths of mesoderm from the foregut that represent the ventral and dorsal buds. The dorsal bud grows more rapidly and rotates, and approximately 8 weeks after fertilization, the two parts unite to form the pancreatic gland. The ventral bud gives rise to the head and the main pancreatic duct. The other bud becomes the uncinate process, body and tail of the pancreas [2].

Often the only indication of the bifid pancreas tail (pancreas bifidum or fish tail pancreas) is the branching of the main pancreatic duct and can be seen on endoscopic retrograde cholangiopancreatography (ERCP) or magnetic resonance cholangiopancreatography [1]. In general, it is considered to be a benign variant of development with little or no clinical significance. Still, taking in consideration that it is rarely encountered it is hard to say if any pathological condition is tightly associated with it.

The artery of Popova is not a commonly accepted term; in fact, it is not the part of anatomical terminology. In 1910, Popova described a superior horizontal pancreatic artery, which was named after her and then unfortunately fell into oblivion for ages. The artery starts directly from the splenic artery and runs along the superior border of the body and tail of the pancreas [8].

We present a rare case of pancreas bifidum with a co-exiting superior horizontal pancreatic artery of Popova. We demonstrated how the artery can vascularize a major portion of the gland when it receives multiple tributaries from the splenic artery. This knowledge can be useful in surgical and diagnostic procedures.