Dental diseases are among the most prevalent and costly diseases affecting industrialized societies, and yet are highly preventable. For example, in the UK, the National Health Service spends over £1,6 billion per annum on dental treatment, and this figure increases to £2,6 billion if the burgeoning private sector costs are included [1, 2].

Oral pathogens are microorganisms on the oral surface that play an important part in the development of caries and periodontal diseases [3, 4]. It is now clear that microorganisms play an essential role in the pathogenesis of dental caries and consequently provides a prime target for the prevention of this disease by antibiotics and vaccine [5, 6].

Most active pharmaceutical ingredients (API) have highly targeted specific mechanisms of action and interfere with one particular cellular function such as cell wall synthesis, protein or RNA synthesis, DNA replication or energy metabolism [7-10]. Drugs are widely used in humans and animals, resulting in the increasing emergence of resistant bacterial strains. Bacteria can be intrinsically resistant to certain substances or can overcome susceptibility by genetic adaptation. Hence the development of new generation antibiotics is a high unmet medical need [7], especially in dental care.

Modern antiseptics containing сhlorhexidine that are commonly used in dentistry are known to stain teeth, composite restorations and dorsum of the tongue. They often cause taste sensitivity distortion. If used longer than 14 days, they might lead to disbiotic changes. Hence new active materials are needed.

New promising candidates under development as alternatives for existing API are the synthetic guanidine-based polymers, with a new physicochemical mechanism of action and favorable toxicological properties.

One of the emerging classes of guanidine-based polymers belongs to the branched oligomers of hexamethylenediamine and guanidine which have been in use mainly as antiseptics, surface disinfectants and topical antimicrobials for over 80 years within clinical, industrial and domestic hygiene delivery [11].

Branched oligo(hexamethyleneguanidine) (OHMG) hydrochloride (Figure 1) can be used in medical practice for treating viral and infectious dental diseases because of their highly effective action and low toxicity [11-13].

The aims of the present investigation were to assess the antimicrobial activities of the branched OHMG hydrochloride on main oral pathogens.

This choice of microorganisms is due to the published data [14, 15] and the results of research in our laboratory.  The organisms selected for the study are frequent causative agents of infectious-inflammatory processes in patients with various purulent-inflammatory diseases of maxillofacial area.

Sample of branched OHMG hydrochloride (“DEZAPOL®”) was obtained from Institute of Pharmaceutical Technologies (Moscow, Russia), number-average OHMG molecular weight is 750 Da, average number of branchings is 0.25 to per molecule [12].

We have prepared several solutions from OHMG hydrochloride for evaluation of antimicrobial activity.

For the preparation of the bacterial suspensions net daily culture of microorganisms diluted in sterile 0.9% chloride solution sodium until a turbidity equivalent to a 0.5 standard the McFarland (approximately 1.5x108 CFU/ml).

Then there were prepared tenfold broth solutions with the final concentration of approximately 1,0x106 CFU/ml, - in the Miller-Hinton broth for facultative anaerobes and enriched thioglycollate medium (BD, USA) – for obligate anaerobes from our solutions mentioned above.

For the control there was used the test tube No. 4 with the culture where to instead of the OHMG solution there was added 1 ml of the relevant broth. All the samples were incubated in a thermostat at 36°C, the incubation of the obligate anaerobic bacteria was done in a jar with the use of the GasPak System (BD, USA), after 24-72 hours they were plated in the dense nutrient medium for detection of the bacterial concentration. After 24-72 hours of incubation of plates with inoculations and depending on the type of microorganisms there was calculated a number of appeared colonies and the bacterial concentration was detected.

The sensitivity of S. aureus, K. pneumoniae was determined by the standard broth macrodilution method. Strains were tested in the cationon-balanced Mueller-Hinton broth (BD, USA) [16, 17].

During the examination of the MIC there was used the 0.5 % (5000 μg/ml) solution of the OHMG as a basic solution out of which there was prepared a working solution – 500 μg/ml, with the following twofold dilutions in the Muller-Hinton broth.

The inoculum of test strains is prepared similarly to the preceding examination in the concentration of 1.0x106 CFU/ml.

In the test tubes with prepared dilutions of the OHMG (1 ml), there is added the suspension of the agar culture of the examined bacteria in the Muller-Hinton broth in the volume of 1 ml. After addition of the bacteria culture, the test tubes are incubated at the temperature 360C for 24-48 hours.

The detection of the MIC was estimated on the absence of growth in the medium containing the least concentration of the branched OHMG hydrochloride.

The detection of the MIC of the obligate anaerobic bacteria was determined by the agar dilution method [18, 19].

During the examination of the MIC of the obligate aerobes, there was also used the branched OHMG hydrochloride 0.5% (5000 μg/ml) solution in the capacity of the basic solution out of which the series of twofold diminishing concentrations are prepared. In the liquefied Brucella agar (17 ml) there is sequentially added 2 ml of each the branched OHMG hydrochloride dilution and 1 ml of laced blood.

The microbe’s suspension containing about 1-2x108 CFU/ml of examined microorganisms is prepared similar to the preceding examination and in the volume of 0.5 μl is placed on the surface of the agar with various concentrations of the branched OHMG hydrochloride. After the placing of the germ culture, the plates are incubated at the temperature of 360C for 72 to 108 hours in anaerobic conditions.

The detection of the MIC is estimated according to the absence of the growth on the plate with the medium containing the least concentration of the branched OHMG hydrochloride.

The experiment was performed three times for each concentration of the branched OHMG hydrochloride in each type of microorganisms.

Determination of the influence of branched OHMG hydrochloride on bacterial membranes

Examination of the bactericidal activity of the 0.1%, 0.2% and 0.5% water solution of the OHMG hydrochloride

Table 1 presents the data on the bactericidal effects of a water solution of the branched OHMG hydrochloride on the tested microorganisms in three concentrations. As seen from Table 1, aqueous solutions of 0.05%-0.25% possess bactericidal activity against all the studied microorganisms. The investigated solutions caused 100% death of ten of the eleven species. In the study, K. pneumoniae – water solution of the OHMG hydrochloride 0.05% and 0.1%, causing the death of 99.90% and 99.96% of bacterial cells K. pneumoniae, during the second study found no growth increase in this type of microorganisms.

Table 1. Bactericidal activity of water solution of the OHMG hydrochloride

The values of the MIC of branched OHMG hydrochloride shown in Table 2.

The results present in Table 2 indicate, that MIC of branched OHMG hydrochloride has a range 0.5-250.0 μg/ml. MIC-values of sample of facultative anaerobic microflora (S. aureus АТСС 29213, K. pneumoniae ATCC 13883) was the lowest concentration which we have. Fusobacterium nucleatum ATCC 25586 and Prevotella disiens №1116/3 were most susceptible to branched OHMG hydrochloride, from obligate anaerobes.

Determination of the influence of branched OHMG-HC on bacterial membranes

To determine the effect of the OHMG on the permeability of bacterial membranes to external substances, the bacterial suspension was incubated for 15 minutes in the presence of 20 μg/ml of the OHMG and fluorescent dyes LIVE/DEAD. The mixture of LIVE/DEAD dyes consists of two components: the green fluorescent dye SYTO 9 and the red fluorescent dye propidium iodide (PI). Both dyes fluoresce only after binding to DNA, while SYTO 9 has the ability to penetrate into cells, while PI is unable to pass through intact cell membranes and only penetrates into cells whose membranes are damaged. Thus, living cells with intact membranes are colored green, while cells in which the integrity of the membranes are broken are colored at once green and red, or only red due to excess of PI.

The figures show data for some selected crops. Both facultatively aerobic strains demonstrate an increase in membrane permeability for PI with simultaneous incubation with 20 μg/ml of OHMG and LIVE/DEAD dyes compared to incubation without OHMG (Figure 1).

To quantify this effect, the number of cells and aggregates stained with SYTO 9 (green) or PI (red), as well as their total area, and the ratio of these values for each image obtained, were counted. The data are given in Table 3.

Table 3. The influence of 20 μg/ml of OHMG on the permeability of bacterial membranes for PI 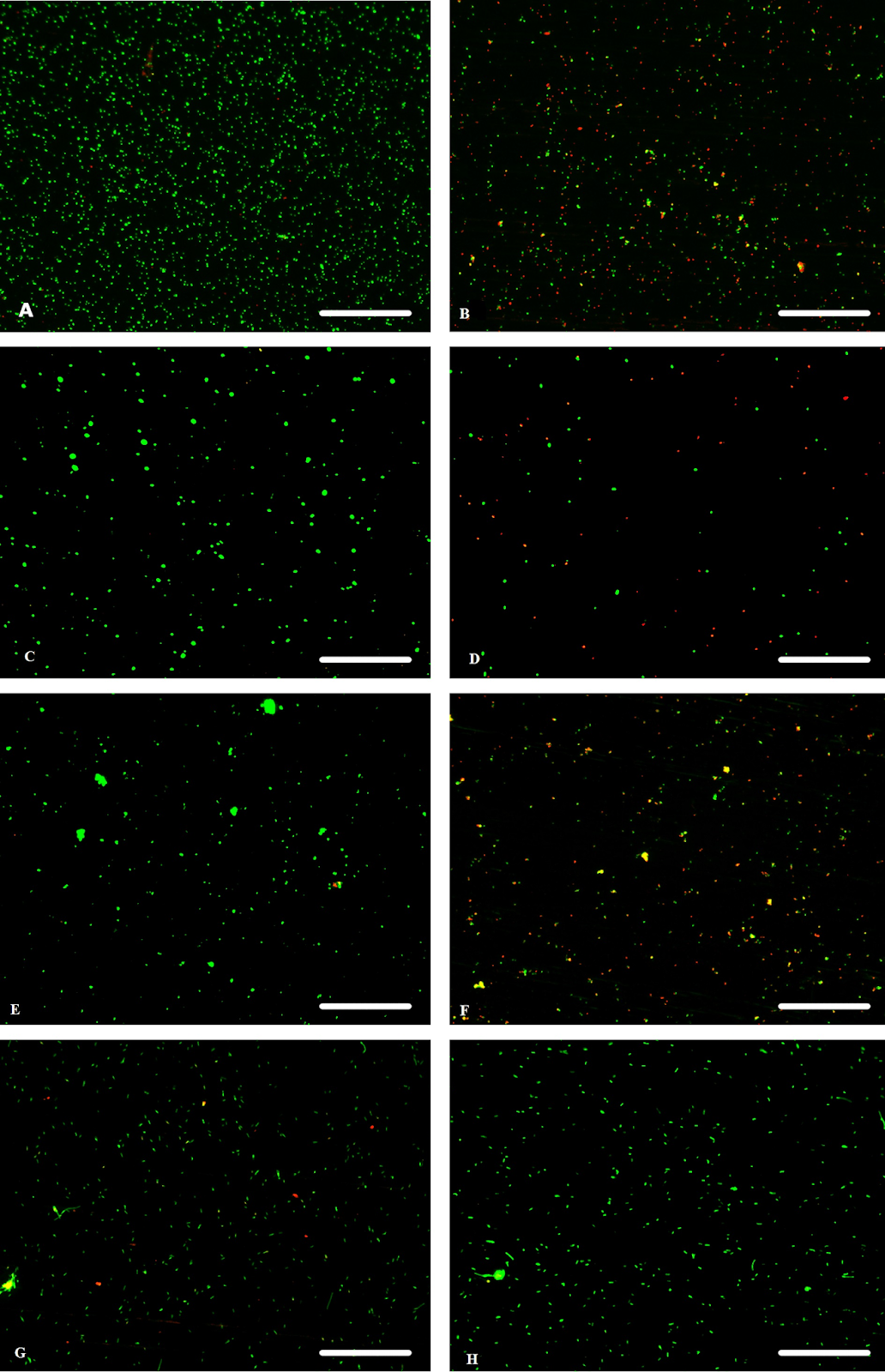 Figure 1. Microphotographs of bacteria after simultaneous treatment with LIVE/DEAD dyes and 20 μg/ml OHMG. On the left are photographs with dying, on the right trearment with the OHMG hydrochloride solution: А, B – S. aureus; C, D – K. pneumoniae; E, F – A. odontolyticus; G, H – F. nucleatum. The size of the ruler is 100 μm.

At present, a large number of synthetic biocidal compounds are known to fight the pathogenic microflora. These include antibiotics [20], quaternary ammonium bases [21-24], compounds of phenolic series [25-27] and some others. However, in modern works [8, 28-34] it is shown that in different microorganisms, with respect to these substances, resistance is developed sooner or later. This prevents good treatment. A new type of synthetic biocides to which resistance is not developed in microorganisms are guanidine compounds such as chlorhexidine salts [35-37], alexidine [38, 39] and polyguanidines [40].

Preliminary studies [41] show that one of the promising compounds exhibiting biocidal activity against aerobic and anaerobic microflora can be partially branched oligohexamethyleneguanidine hydrochloride. It is believed that the partially branched OHMG hydrochloride has a lower toxicity and corrosive activity than its linear counterparts [40]. At the heart of its action, apparently, is the interaction of positively charged guanidine fragments with negatively charged sites of the peptidoglycan layer of the bacterial cell [42]. As a result of this interaction, the integrity of the outer membrane of the cell is broken, and it collapses. Our studies (Figure 1) confirm this assumption, indicating the destruction of cell membranes under the action of the branched OHMG hydrochloride.

However, the effect of the branched OHMG hydrochloride on different types of microorganisms investigated is not the same. Based on the analysis of individual values of MIC (Table 2), it can be concluded that the antiseptic in question is different in relation to different types of microorganisms. Individual MIC values vary widely (from 0.5 μg to 250.0 μg/ml of antiseptic), with facultative anaerobic bacteria (Staphylococcus aureus and Klebsiella pneumoniae) more sensitive to the action of branched OHMG hydrochloride, compared to obligate anaerobic (Actinomyces pyogenes, Actinomyces odontolyticus, Actinomyces israellii, Peptostreptococcus anaerobius, Peptostreptococcus micros, Finegoldia magna, Veillonella parvula, Prevotella disiens and Fusobacterium nucleatum). The results of the experiment indicate that branched OHMG hydrochloride is more active against gram-negative bacilli among the mandatory anaerobes (Prevotella disiens and Fusobacterium nucleatum).

Data of the present study indicate that branched OHMG hydrochloride has potential as new candidate which can be used in medical practice for treating viral and infectious dental diseases because it has possessed a wide antimicrobial spectrum.

Many thanks to the Institute of Pharmaceutical Technologies (Moscow, Russia) for their support.

For this type of study formal consent is not required. This article does not contain any studies with human participants or animals performed by any of the authors.