BP load is the percentage of readings above the threshold during 24 hours [1]. In the pediatric population, the threshold is the value of 95th percentile according to sex, age and height [5]. BP load should be less than 25%. Patients with BP load more than 50% have an increased risk of target organ damage [6]. The values of BP load that exceeded 25%, but are less than 50%, in combination with increased office BP act as one of the criteria of prehypertension [5], but in case of normal values of both office  and mean ambulatory systolic blood pressure (SBP) or diastolic blood pressure (DBP), it is regarded as a risk factor of AH development.

Several studies reported that abnormal dipping status in adults is associated with obesity [9], development of chronic kidney disease [10] and increased risk of cardiovascular diseases [11], but there is lack of data about this problem in the pediatric population. Furthermore, it is well-known that essential AH is a current epidemic problem in adults and BP abnormalities have their origins in childhood, so it confirms the importance of early diagnosis and prevention strategies [3].

The goal of this study was to describe the occurrence of increased BP load in adolescent boys with different circadian BP patterns.

Figure 1 shows the scheme of study design. We recruited 190 boys 12-17 years old. The inclusion criteria were office BP levels (in three separate measurements) and 24-h SBP and DBP levels less than 95th percentile according to sex, height and age. Adolescents with congenital heart and vessel disease, arrhythmia, acute and chronic kidney disease and body mass index (BMI) less than the 10th percentile and more than the 90th percentile according to sex and age were excluded from the study. 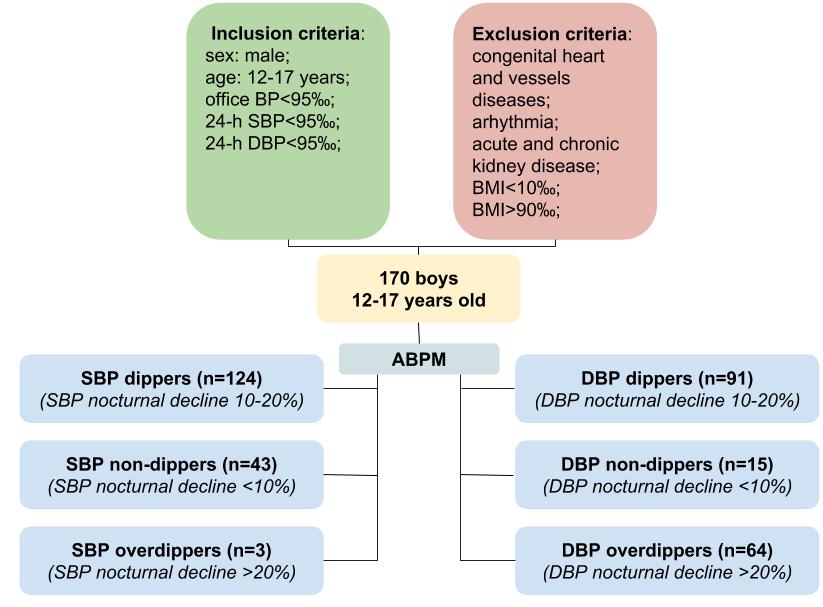 We performed ABPM using oscillometric device BPLab (level of accuracy A/A [12]) with the appropriate size cuff that was applied to the child’s nondominant arm. The device was programmed to record BP every 15 min during daytime and every 30 min during sleep. The participants maintained a diary and indicated sleep and wake times, physical activities, stressful situations, dizziness, bad quality of sleep or sleepiness. We accepted only ABPM profiles with at least 70% of recordings being obtained at least every 30 min.

We analyzed the nocturnal SBP and DBP fall, systolic and diastolic BP load based on data of ABPM.

The study was approved by the regional scientific ethical committee. All the participants and their parents received detailed information about the procedure of measurements, were instructed how to stop readings if there is severe discomfort and signed a written consent.

Statistical data processing was done with Microsoft Excel 2007 (Microsoft, USA) and Statistica 6.0 (StatSoft, USA). We used Shapiro-Wilk’s W test to determine the type of distribution. All data are shown as median (Me), mean, maximum (max), minimum (min), interquartile range (IQR) and standard deviation (SD). The frequency of occurrence is shown in percents. We compared qualitative variables using the Pearson chi-square test or the Fisher exact test when the calculated sample size was <5.

Figure 2 shows the percentage occurrence of three circadian patterns of SBP and DBP. Due to the level of SBP dipping we found that 73% (n=124) of boys had normal circadian BP profile (SBP dippers), loss of the nocturnal decline of SBP (SBP non-dippers) was found in 25% (n=43) of participants and 2% (n=3) had an excessive fall in SBP at night (SBP over-dippers). The analysis of the DBP dipping showed different results: 54% (n=91) of the participants had from 10 to 20% decline in night to day diastolic BP (DBP dippers), 37% (n=64) had an excessive fall in DBP at night (DBP over-dippers), 9% (n=15) had loss of the nocturnal decline of DBP (DBP non-dippers) (Figure 3). The occurrence of different BP patterns was significantly different for SBP and DBP (Chi-square =75.5, df=2, p<0.001). 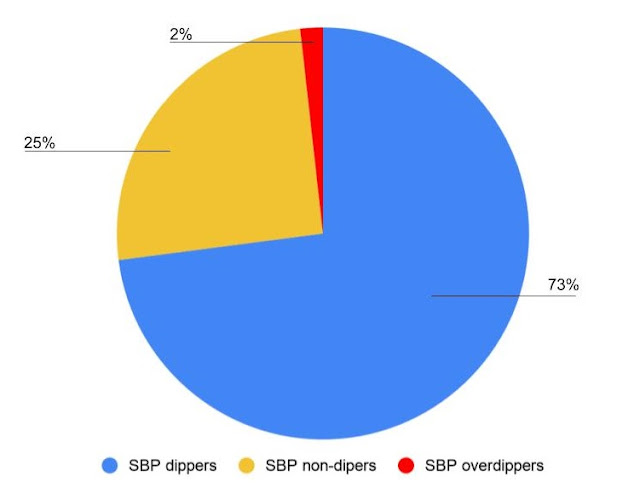 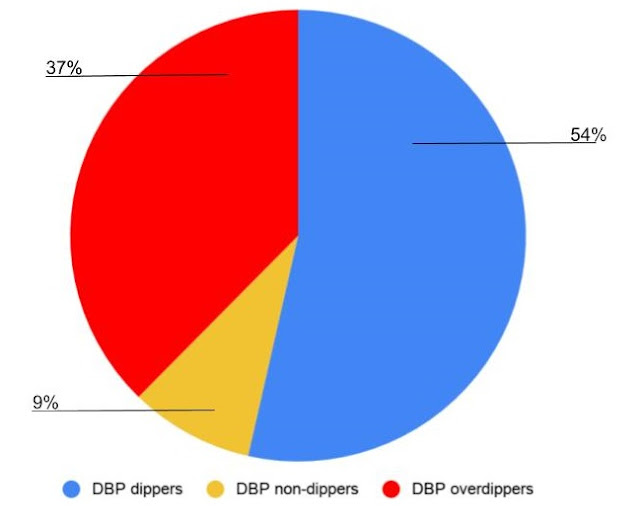 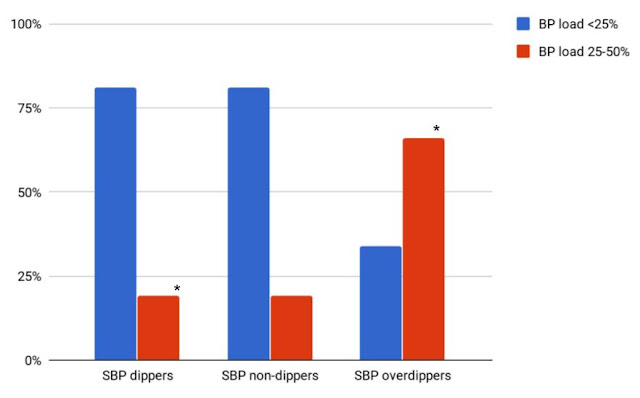 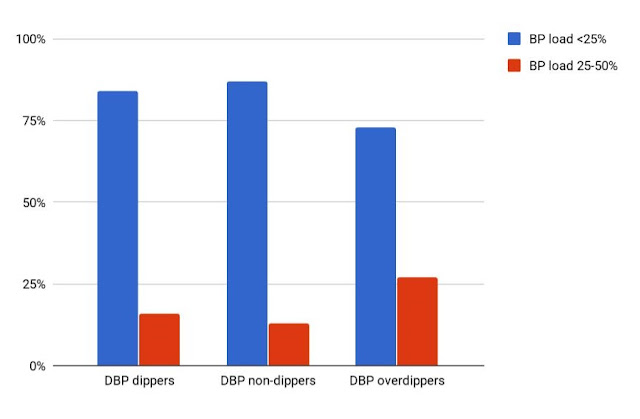 In this study of adolescent boys with normal values of both office and mean ambulatory SBP and DBP we have found 3 types of circadian blood pressure profile: “dippers", "non-dippers" and "over-dippers". The type "night-peakers" was absent, so it means that in the study group there were no participants with nighttime hypertension. The most frequent abnormal type of SBP rhythm was a non-dipping pattern, on the contrary, for DBP it was the over-dipping pattern with excessive fall at night. The occurrence of increased BP load was the highest in the groups with the nocturnal over-dipping pattern for both SBP. The main limitation of the present study is the small size of "SBP over-dippers" group, so it is necessary to continue the study and to repeat the analysis in a bigger sample of participants. In available literature, there are few data on the prevalence of different dipping patterns in the general pediatric population. There are some studies that reported significant association between nocturnal non-dipping pattern and obesity [13], left ventricular hypertrophy [14] and elevation of carotid intima-media thickness [15]. On the contrary, there is lack of data about the significant effects of extreme dipping status on health outcomes in the pediatric population. A lot of exogenous environmental 24-hours cycles and endogenous circadian rhythms contribute to the typical rhythm of BP. Circadian rhythm of BP is connected with vagal tone, sympathetic nervous system activity and plasma adrenalin/noradrenaline and atrial natriuretic peptide concentrations. Even the endothelial function has its own circadian profile that we can see in dynamic concentrations of nitric oxide and endothelin-1 during a day [7]. So it seems to be obvious that in case of changes in the nocturnal pattern of BP, the main problem should be in the regulatory mechanisms, but this hypothesis still needs the proofs.

During puberty, there is an acceleration of changes in BP. Pubertal growth leads to the evaluation of BP that is associated with the increase in gonadal hormones and growth hormone. The interaction of these hormones with several pressor systems may play role in the future risk of hypertension [16]. All this data provide a basis for further study into the relationship between the types of circadian BP profile, parameters of ABPM, hormonal status and cardiovascular health in adolescents.

Healthy adolescent boys with normal values of both office and diurnal SBP and DBP have different circadian blood pressure patterns. The occurrence of increased BP load was the highest in the group with the nocturnal over-dipping pattern for SBP. The causal mechanism of this is proposed to be complex and an important subject of future research.

This study was funded by the Fund for the promotion of small forms of enterprises in the scientific and technical sphere the program «UMNIK», project №12251GU/2017.