Cardiovascular diseases are the main cause of death in the developed countries, including the Russian Federation. Development of new noninvasive diagnostic techniques is important to solve this problem. Perspective direction of the study is the diagnostics of coupling between the loops of heart rate control and vessel tone sympathetic control.

Our previous studies [1-4] showed the coupling strength to be an important index of the cardiovascular health. However, the used approach of coupling detection, namely the calculation of total percent of phase synchronization, requires introduction of the phases of the signals from the sympathetic loops (signals of RR-intervals and photoplethysmogram (PPG) filtered in 0.05-0.15 Hz band). Introduction of the phases is highly complicated for the signals of biological origin that typically have wide spectra.

Many researchers consider the cross-recurrence analysis to be a powerful tool for the detection of weak coupling in biological systems [5-9]. This approach also does not require the introduction of phases. Therefore, we aim to test its applicability to the detection of coupling between the loops of autonomic control and compare it to the current approach.

In the present study, we use the mathematical model [10] of the cardiovascular system to compare the methods, because in the model it is possible to finely tune the activity of the autonomic control and to gradually reduce the coupling strengths. Both methods were then applied to the experimental data from healthy adults and newborns.

We analyzed 15-minutes experimental electrocardiogram records (ECG) of five healthy adult subjects (four males and one female aged 20-25 years) and five healthy newborn subjects (3 days old). All adult subjects and the parents of newborn subjects signed a written consent. The studies were performed in accordance with the Declaration of Helsinki and approved by the local research Ethics Committee of the Saratov Research Institute of Cardiology (Saratov, Russia).

Experimental signals were recorded using the standard electroencephalograph analyzer EEGA-21/26 ‘Encephalan-131-03’ (Medicom MTD Ltd, Taganrog, Russia) [http://medicom-mtd.com/en/products/eega.html]. The signals from the adult subjects were recorded, while the subjects were resting in the quiet dimly-lit temperature-controlled room, at least 2 hours since last meal. The subjects were in supine position, were breathing spontaneously and with no forced or delayed respirations. All signals were sampled at 250 Hz and digitized at 14 bits resolutions.

The methods were tested on the RR intervals and PPG signals from the mathematical model proposed by us in [10]. It is based on the Seidel and Herzel model [11] and Kotani model [12]. The model simulates the following processes: main heart rate, autonomic control of heart rate and heart contractility, forming of arterial pressure (AP) during the cardiac contraction and cardiac filling phases. The model also simulates the influence of the respiration on the aforementioned processes. The structure of the model is presented in Figure 1. 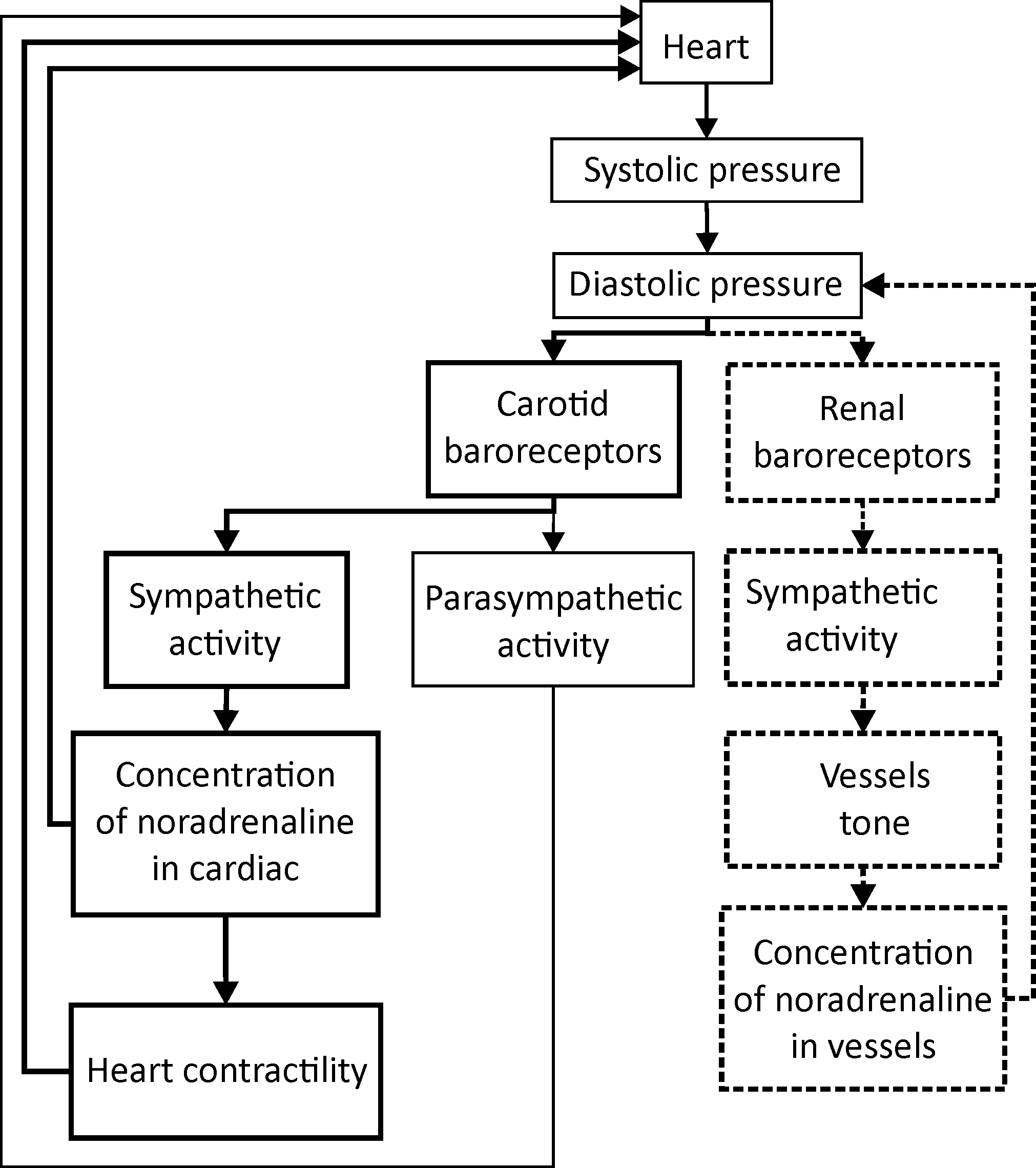 The main feature of the model is the two separated loops of heart rate control and vessel tone sympathetic control. The loops were modeled in accordance with the modern understanding of the nonlinear nature of autonomic control [13] and can exhibit coupling, as seen in the experimental studies [2].

The detailed description of the model is given in [10].

The model was studied under the conditions of the four numerical experiments:

·         Autonomic control is fully active. All parameters of the model are chosen to achieve the best possible fit to an average healthy subject;

We used the delay method to recunstruct the attractor [8]. The coordinates of the embeding space were x(t), x(t-τ), x(t-2τ) etc. Time delay τ was estimated as the absolute maximum of the cross-correlation function for the model interbeat intervals and PPG signals.

Further calculations can be described with Equation 1:

are the points on the reconstructed HRV and PPG attractors, i=1,2...,N, j=1,2...,N is the discrete time, Θ is the Heaviside function, and ε is a small neighborhood.

Thеn we constructed two-dimensional N by N plot. In accordance with eq. 1, we calculated the distance from each point of the first attractors to every point of the second attractor. If the distance between the pair of points, for example HRVi and PPGj, was less than ε, we set to “1” the point with (i; j) coordinates in the CRA plot.

Typical CRA plot for the model interbeat intervals and PPG signals is presented in Figure 2. 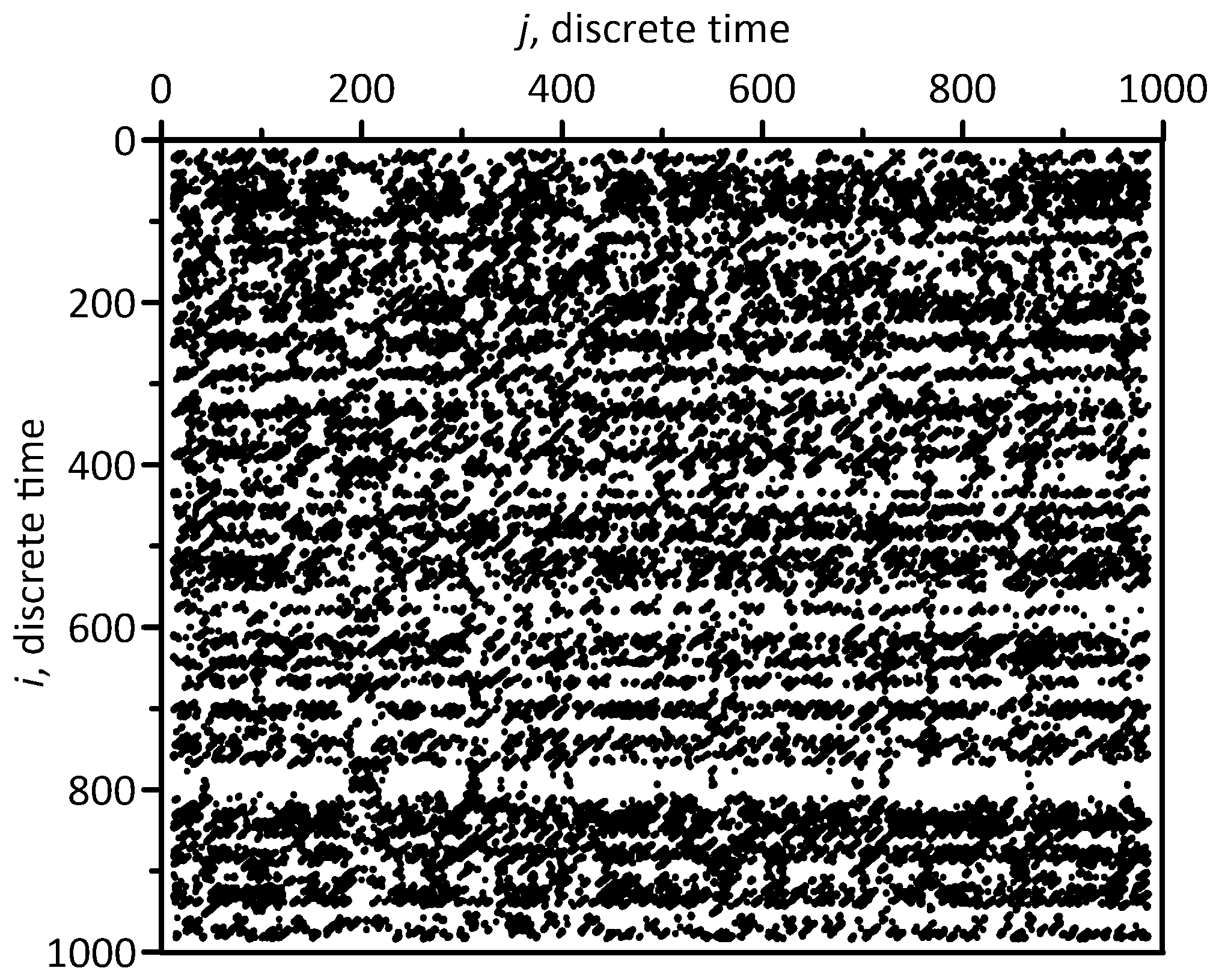 The total percent of phase synchronization

The total percent of phase synchronization (S index) was introduced in [2]. The method is based on the phase analysis approach. The instantaneous phases are introduced to the model interbeat intervals and PPG signals via the Hilbert transformation. Then the difference between the phases is calculated.

Then horisontal sections on the phase difference are automaticaly detected, they correspond to the coupling intervals. Total lengts of these intervals is calculated, then its ratio to the overal length of the signals is calculated. Percentage of this ratio is the S index.

Experimental data are reported as the mean (M) with standard deviation (SD). We applied the Shapiro–Wilk test to check whether the data were approximately normally distributed. The t-test was used to compare the continuous variables between groups. The obtained estimations were considered statistically significant if P<0.05.

The results of analysis of the model data are shown in Table 1.

Table 1. S index and cross-recurrence indices calculated for the interbeat intervals and PPG signals of the model under the conditions of fully functional autonomic control, 60% functional, and 30% functional and under the autonomic blockade.

As seen from Table 1, the S index demonstrates monotonic decrease with the development of the autonomic blockade. This decrease is expected since the coupling between the loops of autonomic control is at maximum when the control is fully functional, and in the case of full autonomic blockade no coupling could be present. Non-zero value of the S index for the model under the blockade is likely due to the presence of the dynamical noises and the badly defined instantaneous phases. The indices obtained from the cross-recurrence analysis do not agree with the dynamics of the S index and do not exhibit monotonic behavior.

The results of analysis of the experimental data are shown in Table 2 in format of mean ± standard deviation.

Table 2. S index and cross-recurrence indices calculated for the interbeat intervals and PPG signals of adult subjects and newborn children.

As seen from comparison of tables 1 and 2 the model does simulate the decreased S index associated with the development of the autonomic blockade in adults and not fully developed autonomic control in children. The structure of the model also resembles the structure of the real system and our previous studies showed good qualitative accordance between the model and experimental cardiovascular data, both in health and disease [10]. It gives us the basis to interpolate the qualitative model results onto the real cardiovascular system.

From the model data we can assume that CRA indices do not reflect the dynamics of the autonomic control coupling. This result agrees well with the experimental data, since all CRA indices except for one can’t distinguish adults from newborn children with the statistical significance.

The average lengths of the vertical lines (v index in table 2) are significantly different for adult subjects and newborn children. However, the model data suggests that it is due to the reasons unrelated to the state of autonomic control.

Application of methods of nonlinear dynamics to the study of cardiovascular system is an important field of research [11-13, 15-18], and the use of new nonlinear techniques is necessary to advance this field. However, the approbation of nonlinear techniques with the experimental data is complicated by the number of factors such as the dynamical and measurement noises, nonstationarity of the biological signals, technical and ethical limitations that restrict the design of experiments and registration of important data.

There are also problems specific to the diagnostics of coupling between the loops of autonomic control. Parameters of this system greatly vary among the patients. In [19], it was reported that the synchronization index S can take the values from 30% to 50% in healthy subjects. The phenylephrine used to inflict the state of autonomic blockade also has quantitatively different effect on different patients [20]. Therefore, it is technically impossible to inhibit the activity of autonomic control by 40% and 70% in the group of patients with any degree of certainty.

To avoid the aforementioned problems, we tested the coupling detection with the cross-recurrence analysis on the mathematical model of cardiovascular system that has the structure similar to the structure of the real system [21]. Parameters of this model have a physiological sense and we can precisely set the parameters of the autonomic control of heat rate and vessel tone to simulate the stages of the autonomic blockade. With the model it is also possible to generate the signals of any length without the measurement noises or nonstationarity.

The mathematical model used in our study has limitations. It does not consider humoral regulation and does not take into account the hydrodynamic processes in arteries and vessels. Nonetheless, we consider it adequate for such application because in the previous studies we demonstrated the ability of the model to simulate the dynamics of S index in healthy subjects and the dynamics of the cardiovascular system during the autonomic blockade [10].

In the study, the model was used to investigate the dynamics of the cross-recurrence indices during the development of the autonomic blockade and to provide better understanding of the experimental results. Only one index (average length of the vertical lines) in cross-recurrence analysis showed statistically significant difference between the adult and newborn children. However, from the model data it is evident that the v index doesn’t reflect the physiological processes in autonomic control, since it shows no monotonic decrease or increase with the development of the blockade.

For this reason, we think that caution should be expressed when using the cross-recurrence analysis in medical diagnostics or as a part of machine-learning algorithms.