romj-2021-0214.pdf
Abstract:
Aim — 60 Vietnamese dry femurs were studied to design a carbon composite external fixator for intertrochanteric fracture. Its mechanical strength was evaluated. Material and Methods — The femurs were measured by standard goniometers. The fixator injection mold was created by a CNC machine. The fixator material included carbon fiber (30 – 40% content), BT4, and PA12 plastic. The fixator strength was calculated based on the Finite Element Method. Results — The average femoral neck-shaft angle, anteversion angle, bowing angle, head diameter, and neck width were respectively 124.850 (±7.12), 20.240 (±4.49), 14.900 (±3.27), 4.12cm (±0.30), and 3.05cm (±0.34). A mold and its resulting fixator were designed accordingly. The fixator elasticity modulus, tensile strength, Poisson ratio, and safety factor (K) were 1.32x1010 Pa, 2.21x108 Pa, 0.25, and 1.5, respectively, and max load, stress and transposition were 50-150 N, 1.21-1.38 x 108 Pa, and 0.4-1.27 mm, respectively. The composite fixator was more resistant against pressure across the x-axis but less against the y-axis than the chrome and Inox304 devices. Transposition was the smallest due to its tiny size. Load against z-axis pressure was safe for the patients. Conclusion — This study succeeded to design a prototype carbon composite external fixator with favorable mechanical traits compared with available metal fixators. Further clinical studies are needed to achieve an accurate evaluation of its effectiveness.
Keywords:
femur; morphological parameter; carbon composite; external fixator; intertrochanteric fractures
Cite as:
Le QT, Nguyen TBA. Designing composite external fixator for intertrochanteric fracture treatment based on Vietnamese femur morphological parameters. Russian Open Medical Journal 2021; 10: e0214

Intertrochanteric fracture is a common injury in senior patients [1, 2]. It has a higher occurrence in women and people with osteoporosis [3-5]. Postmenopausal women are especially susceptible to osteoporosis due to estrogen level changes; consequently, women have a much higher intertrochanteric fracture rate than men [6-9]. Recent studies recorded higher intertrochanteric fracture instances: about 50,000 cases annually are recorded in France and 250,000 cases annually in the United States [10, 11]. An increased number of instances of this injury in senior citizens was also detected, with the rate of patients aged over 80 years augmented from 22.29% in 1977 to roughly 50% five years later [12].

Technically, intertrochanteric fracture can be healed relatively quickly due to a good level of blood supply [1, 5] with a very low rate of nonunion of femoral head necrosis (<1%); however, surgical intervention is required to prevent limb deformity and movement pain. Senior patients also suffer from prolonged bed rest complications, such as pressure ulcers, thromboembolism, or pneumonia, causing high mortality rate. Studies in Vietnam, such as Nguyen Trung Sinh (1984) on 50 patients treated with Whitman casting, recorded poor outcomes for 40% of cases, including a 26% mortality rate within the first three months and 14% incidence of pressure ulcers. Despite the lack of comprehensive statistical data, the intertrochanteric fracture burden on the patients, their families, and society is overwhelming [8, 13].

Prior to 1990, intertrochanteric fractures in Vietnam, despite lack of comprehensive statistics, were probably treated by traditional conservative methods, leading to many complications and a significant mortality rate [13]. From 1990 on, more advanced procedures, using intramedullary rods, dynamic hip screw plates and gamma nails, were introduced [24-28]. However, such treatments were performed mainly at large medical centers for children or senior patients without internal diseases. Fracture treatment is still affected by prolonged surgery, excessive bleeding, significant surgical trauma, the requirement of specialized equipment (such as C-Arm), and risks of nail extrusion in osteoporotic senior patients [26]. Besides, fixation nails, screws and plates in Vietnam are imported rather than manufactured domestically; hence, material supply and compatibility are significant concerns [29].

There are several studies on the implementation of the metal external fixator in Vietnam, such as by Vu Huu Dung [30], Nguyen Van Tin [31], and Le Quang Tri [4]. Recorded data were inadequate for accurate evaluation, but the outcome was encouraging. Moreover, it is possible to manufacture external fixators domestically to solve the supply issues in developing countries with limited financial resources. However, the metal fixator weight and bulkiness necessitated the use of alternative materials, amongst which carbon composites are potential candidates due to low values of their weight, heat resistance, friction and thermal expansion, making them suitable for implementation in Vietnam.

Thus, we conducted our study to design an external fixator using carbon composites suitable for Vietnam. To achieve this goal, we gathered measurement data of the proximal side of Vietnamese femurs and investigated the mechanical strength of the designed external fixator.

Bone measurements: we investigated sixty dry specimens of adult Vietnamese femurs (29 right and 31 left femurs). The femurs were randomly chosen (without gender consideration) from the specimens stored at the University of Medicine and Pharmacy at Ho Chi Minh City. The study excluded cracked, broken or defective specimens, or specimens with abnormal and pathological features, such as bone necrosis or bone tumors.

Bone measurement. The measurements were performed by the conventional joint goniometer set (Tiger Medical, Inc.) (Figure 1). Nine morphological parameters were recorded (Table 1), each was measured three times on the same bone specimen, and the average value was computed. 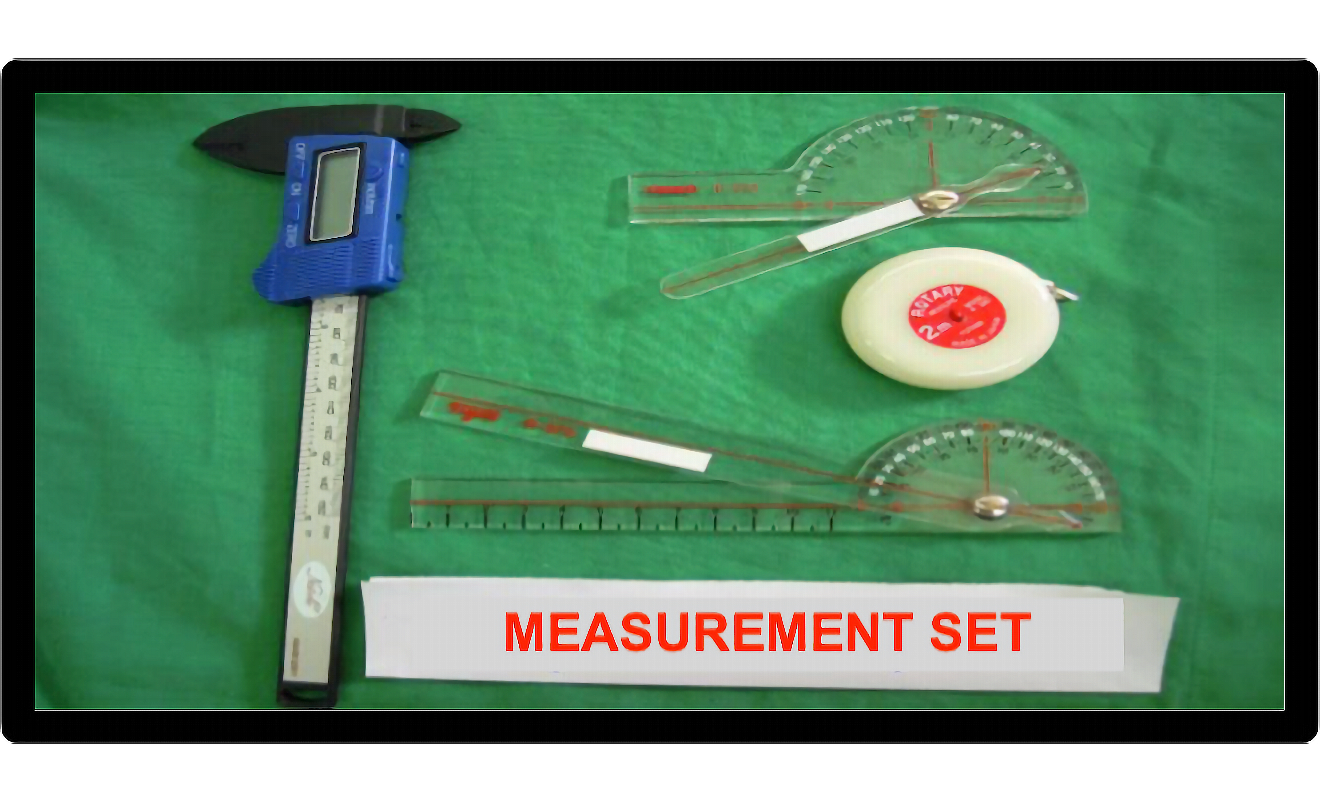 Mold and carbon composite material. Injection molding was chosen as the method for fixator manufacture. All necessary parts of the fixator were formed in just one mold since their sizes were small. The mold and the fixator were designed based on the parameters measured during the investigation of femur specimens.

The mold was made from CT45 steel, which is resistant to erosion and oxidation, has a high load carrying capacity, melting point and elasticity. The mold consisted of an upper half and a lower half, and comprised automatic ejectors. The mold parts were processed by a CNC machine and were plated.

The composite material was made from a mixture of carbon fiber (HITCO, U.S.), BT4 (NIIGRAFIT, Russia), and polyamide 12 (PA12) plastic pellets, with a 30 – 40 % fraction of a carbon fiber. The mixture was then processed to make the composite PA12-carbon pellets. The material pellets were then forced into the molding machine to form the desirable parts. The operating temperatures were 250-260oC. The manufacture process is presented in Figure 2.

The designed fixator was investigated for mechanical strength and was compared with available imported fixators. Mechanical strength was calculated based on the Finite Element Method (FEM) [32, 33] using the ANSYS® 13 software. The testing models were built by specialized CAD software. The structure was modeled three-dimensional, and the solid element was used. The mechanical strength was tested against the pressure across the x-axis (i.e., across the fixator main axis), y-axis, and z-axis (perpendicular to the fixator plane).

* – the measurement unit was degree (0) for the angles and cm for other parameters.

Injection molding was chosen as the method for fixator manufacture and was described in the Materials and Methods section. The mold design was based on the measurements of the femur specimens and is shown in Figure 3. 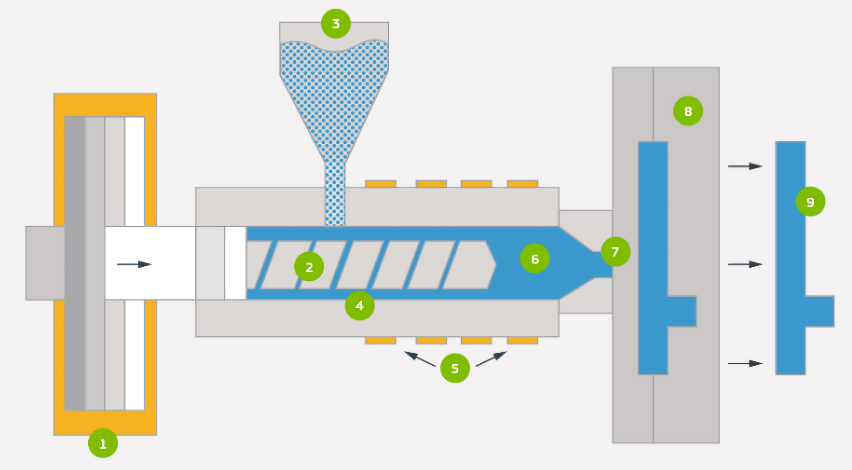 The fixator design is presented in Figure 4, and a prototype is shown in Figure 5. The fixator consists of two parts. The bone nails at the proximal femur part were clamped in the ditches between two halves of a cylindrical part used for both left and right limbs. The front half (to the front from the coronal plane) could slide along the ridge to the appropriate ditch of the back half, and the angle between this sliding plane and the screw plane was 200, similar to the femoral anteversion angle. Two halves of a rectangular prism kept the nails at the femur distal part. The coronal plane angle with the prism halves’ contact surface was 150, similar to the anterior protrusion. 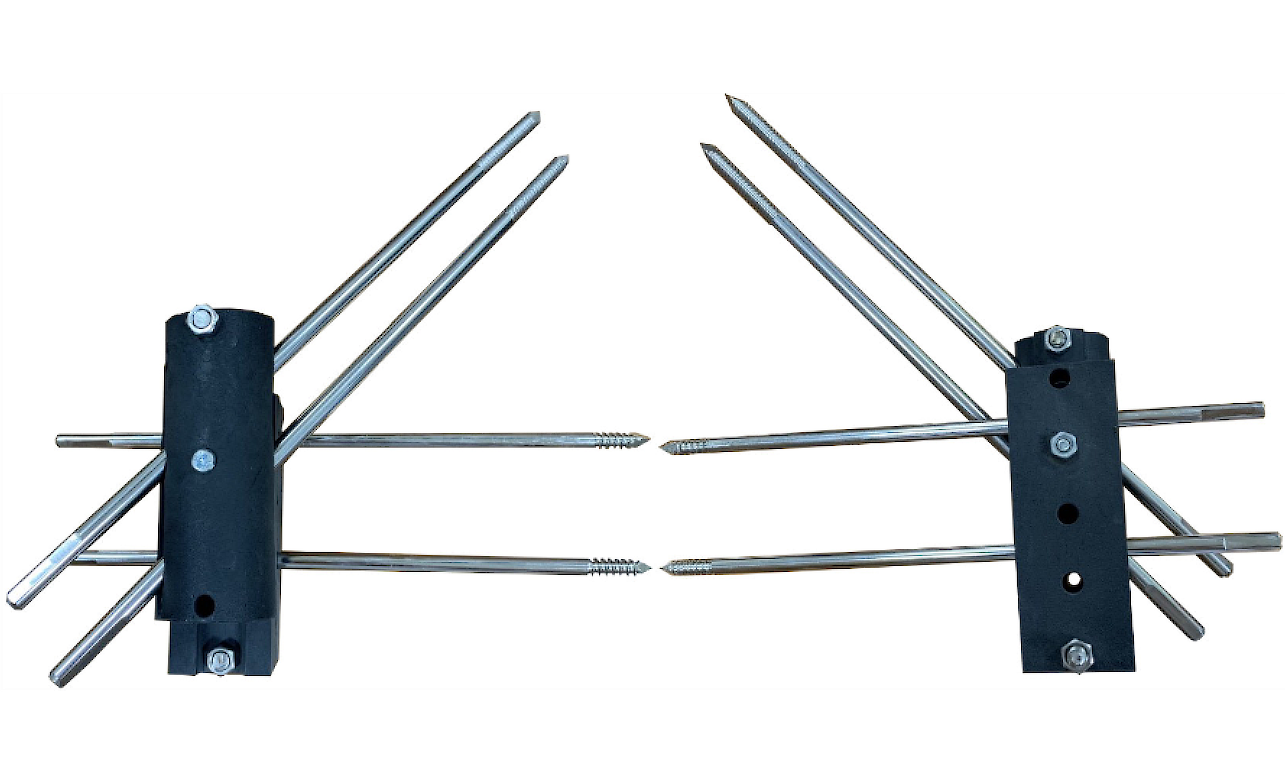 Figure 5. Lateral side and medial side of the external fixator prototype with inserted screws.

The measurements were performed on 60 randomly selected Vietnamese femur specimens (29 of the right femur or 48.33%; and 31 of the left femur bone, or 51.76%). The measured parameters were not significantly different among the right and left femurs (p<0.05), which was similar to other domestic and foreign studies, such as the research by Nguyen Van Tin [8], or the report by Trinkaus and Anderson (1998) [34]; both asserted an insignificant difference among the legs. The measurements on CT scan images by Baharuddin and colleagues [35] showed an insignificant difference between left and right femurs, but a significant difference between males and females, which could hardly be investigated on dry bone specimen, like those in our study.

The value of the neck-shaft angle is high in infants (on average, 150-1600), then it decreases during the body growth, reaching 1350 in adults. This value has been used as a reference for the manufacture of femoral surgical equipment. The neck-shaft angle is a significant parameter for treatment, using a dynamic hip screw or dynamic condylar screw fixators; these surgeries usually require an angle value of 1350 [36]. However, this condition does not seem to fit Vietnamese people, since our study recorded a smaller neck-shaft angle (1240 for the left side and 1260 for the right side).

Medical publications mention various anteversion angle measurements, including measurements on dry bone specimens; however, it is more convenient to use image materials, such as radiographic, ultrasonic, CT, or MRI images. The measurements on dry femur specimens were affected, for example, by difficulties in identification of the fovea, or the midpoint on the femoral neck outer surface. The comparison of measurements on dry bones vs. image materials was performed by Aamodt et al. [37]. In our study, the average anteversion angle on dry bones was 20.24 ± 4.240, within the acceptable range reported in published sources. Another study in India by Rokade and Mane (2009) [38] reported a quite different value (18.68±6.37). This was probably caused by the difficulties and high subjectivity of these parameter measurements, resulting in a significant difference.

Femoral head diameter and femoral neck width were also important parameters for the suitable design of surgical materials. Our study recorded the value of 4.12±0.3 cm and 3.05±0.34 cm, respectively. The recorded Vietnamese femoral head diameter was quite similar to the parameters of Malaysians but somewhat smaller than those of Europeans and Americans; meanwhile, just a slight difference was found in femoral neck width.

Bowing angle is rarely referred to in studies, despite its importance in equipment manufacturing. Our studies recorded a value of 14.90 (±3.27), which fitted in the range of 100-150 in Gray’s Anatomy.

The lengths of AB, CD, and EF are critically important for treating intertrochanteric fracture using external fixator and surgical nails. Our study established AB=8.12±0.75 cm, CD=8.9±0.65 cm, EF=8.7±0.52 cm, and HK=14.7±1.23 cm. AB, CD, and EF measurements fell within the range of 8-9 cm, and were smaller than in other studies, such as by Pires and colleagues (Brazil) [39]. The latter research yielded the value of 8.6-9.4 cm; it was probably due to the fact that the study was based on image materials rather than dry bones. 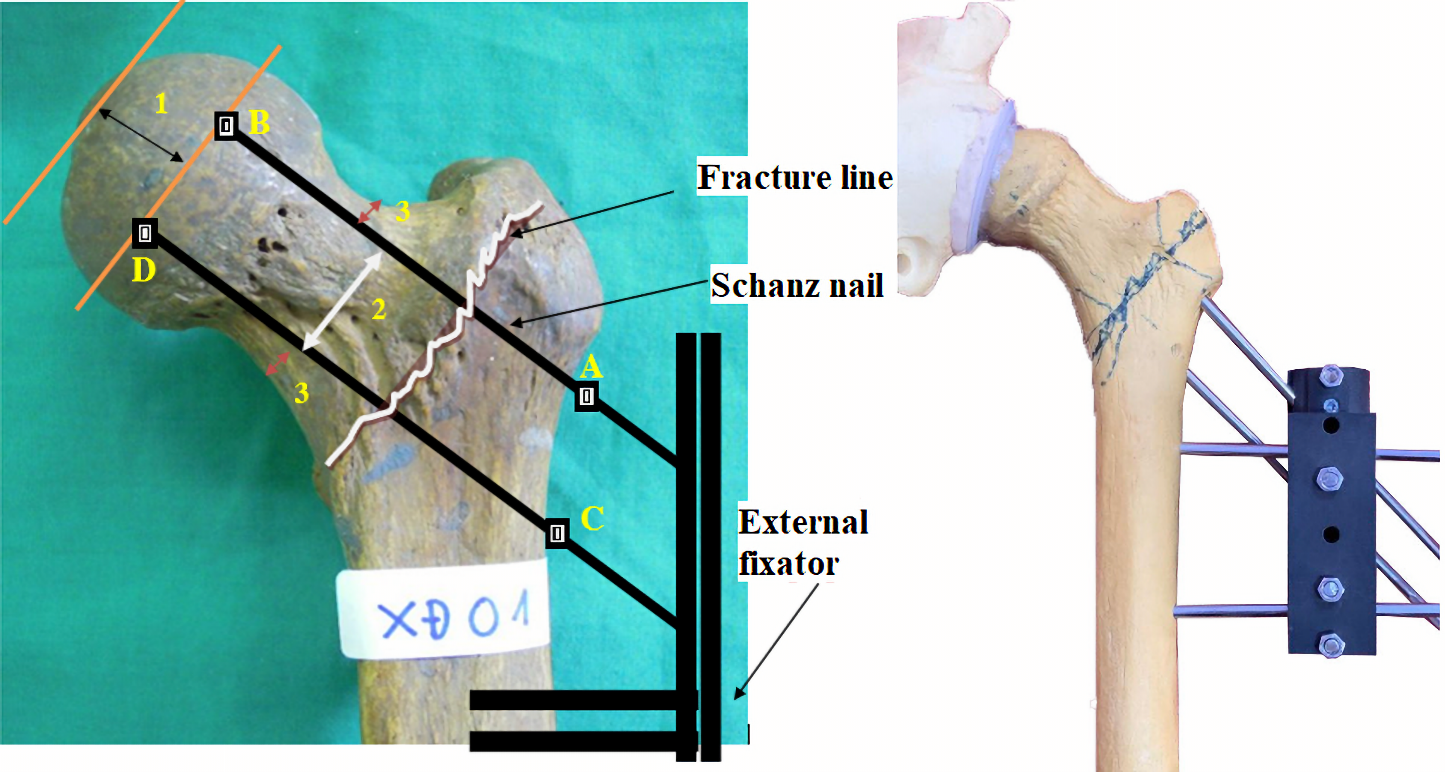 Figure 6 Proposed model for the external fixator and bone nail positions. (1) The Schanz nail tip is 10 mm from the head cartilage, (2) the distance between two femoral nails is 20-25mm, and (3) the nails are 2.5-5 mm from the superior and inferior surfaces of the neck. Hence the length of nails submerged inside the bones should be AB=80–10=70 mm and CD=90–10=80 mm.

The external fixator design must fit the proximal Vietnamese size of a femur and guarantee stable fixation with a proper union and no malalignment. The femoral nails had to be inserted into the neck and shaft, and attention had to be paid to the factors that contributed to the biomechanics of the intertrochanteric region, including 200 anteversion angle of the femoral neck, the anterior protrusion of the femur upper third, and the coronal plane of the shaft.

Based on the measurement of nine morphological parameters of proximal end of the Vietnamese femur, this study succeeded to design a prototype external fixator using carbon composite as material for treating intertrochanteric fracture for Vietnamese patients. Its mechanical strength was comparable to available chrome and Inox external fixators while the transposition was the smallest, which was favorable, and its load against z-axis pressure was safe for the patients. Further clinical studies are required to achieve an accurate evaluation of its treatment effectiveness for intertrochanteric fractures.

We thank our colleagues from the Ministry of Defense, 7A Military Hospital, and the University of Medicine and Pharmacy at Ho Chi Minh City, who provided support and facilities, which were very helpful for our research.