Knowledge and judgments about standard precautions for nosocomial infection: comparative analysis of medical vs. non-medical students

Nosocomial infections (NI) are among the most relevant public health problems worldwide, contributing to the increase in morbidity, mortality, and cost of diagnosing and treatment. They lead to reduction in quality of life in the population [1-3]. The incidence rates of NI are the best indicator of the quality of medical services: high incidence of NI morbidity indicates low quality of medical services. Prevalence of NI in developing countries is 2-3 times higher than in Europe or United States. According to the World Health Organization, 5-10% of all hospitalizations results in NI in North America and Europe, while Latin America, sub-Saharan Africa and Asia show over 40% of hospitalizations with NI [4]. Annually, 5 million NI cases were registered in Europe leading to 50,000-135,000 of additional deaths and the damage to the healthcare system in the amount of 12-24 billion euros [5].

Compliance with standard precautions would prevent global outbreaks and damage from NI. According to standard methods’ precautions, blood, body fluids, secretions, excretions (except sweat), non-intact skin, and mucous membranes may contain transmissible infectious agents [6, 7]. Adequate hand hygiene, along with the use of appropriate personal protective equipment and aseptic agents are key remedies in the prevention of NI [6].

Most studies were dedicated to evaluating knowledge and attitude towards NI among medical students. Their poor knowledge could be associated with a lack of awareness of standard precautions for infection control at medical universities and inadequate programs of medical education. However, no one attempted to conduct a comparative assessment of students’ knowledge, regardless of their training program. The content and quality of medical training programs should promote better knowledge and awareness. Each correct answer was assigned 1 point, while each incorrect answer was scored as 0 points. Each medical student in presumed to accomplish high academic results in infection control, whereas non-medical students are not required to adhere to the guidelines since they cannot play any role in the emergence of NI. Accordingly, the goal of our study was to examine and compare knowledge and judgments on NIs among medical versus non-medical students.

Considering a power of 0.95 and effect size of 20% and significance level of 0.05 we would need 582 students from each school. We decided that the participation rate could be roughly 70%. Consequently, we needed to include all economics students 70% of the School of Medicine students. Data collection took place between September 21 – December 20, 2017.

The questionnaire (Appendix 1) was adapted from H. Sax et al., 2005 [13] and Tavolacci et al., 2008 [14]. The 16-item questionnaire had three sections: respondents’ characteristics (four questions), knowledge of transmission precautions (six questions), and judgments about the precautions (six questions). The respondents’ characteristics included age, gender, field of study, and year of study. The section related to knowledge about transmission precautions included six multiple choice questions related to the knowledge on the prevention concept sensu CDC guidelines [19-20]. In the third section, the questions were aimed at determining respondents’ judgements on prevention standards, risks of NI, the epidemiological situation with NI in Kazakhstan (prevalence, mortality, extended hospitalization), and the most common reasons for non-compliance with the guidelines. A group of professors from Karaganda Medical University independently evaluated the correctness of the answers.

Each correct and incorrect answer was assigned 1 point and 0 points, respectively (the maximum score was 6 points). Two models were applied to the data to evaluate the its dimensionality.  The first model represented one-factor latent trait analysis (LTA) and the second model was two-factor LTA [21]. LTA assumes that the probability of correctly answering an item by an individual is explained by one (one-factor model) or more (two-factor model) continuous variables, commonly called latent variables. LTA is form of factor analysis for dichotomous variables, that considers an existence of one or more underlying factors.

The standardized factor loadings of the model are usually used to interpret the results. Each of these expresses the correlation coefficient between the latent variable and an underlying continuous variable obtained from each item. An association is classified as weak if the corresponding standardized loading is under 0.30, moderate if it is between 0.30 and 0.70, and strong if it exceeds 0.70.

Cronbach’s alpha was used to assess the internal consistency of items, and indirectly evaluated the reliability of the scale.

The Spearman-Brown prediction formula was employed to estimate the hypothetical number of items needed to obtain Cronbach’s alpha of 0.7.

Chi-square tests were used to compare proportions of categorical variables. P-value<0.05 was considered a significance level.

A total of 2,817 questionnaires were included in this study, and 402 (12.5%) students refused to participate in the survey and the questionnaires returned unfilled.

Table 1 presents a percentage of correct answers to the questions on the knowledge of NI vs. the field of study. Medical students scored a higher number of correct answers only for two questions (on the effective means to reduce the risk of transmission of infectious agents and on prevention of infectious agent transmission) with a statistically significant difference between the fields of study of <0.001 in both questions. The remaining questions did not exhibit statistically significant differences among medical and non-medical students.

Table 1. Percentage of correct answers on the knowledge of nosocomial infections vs. field of study

Table 2. Proportion of correct answers and standardized factor loading for each statement 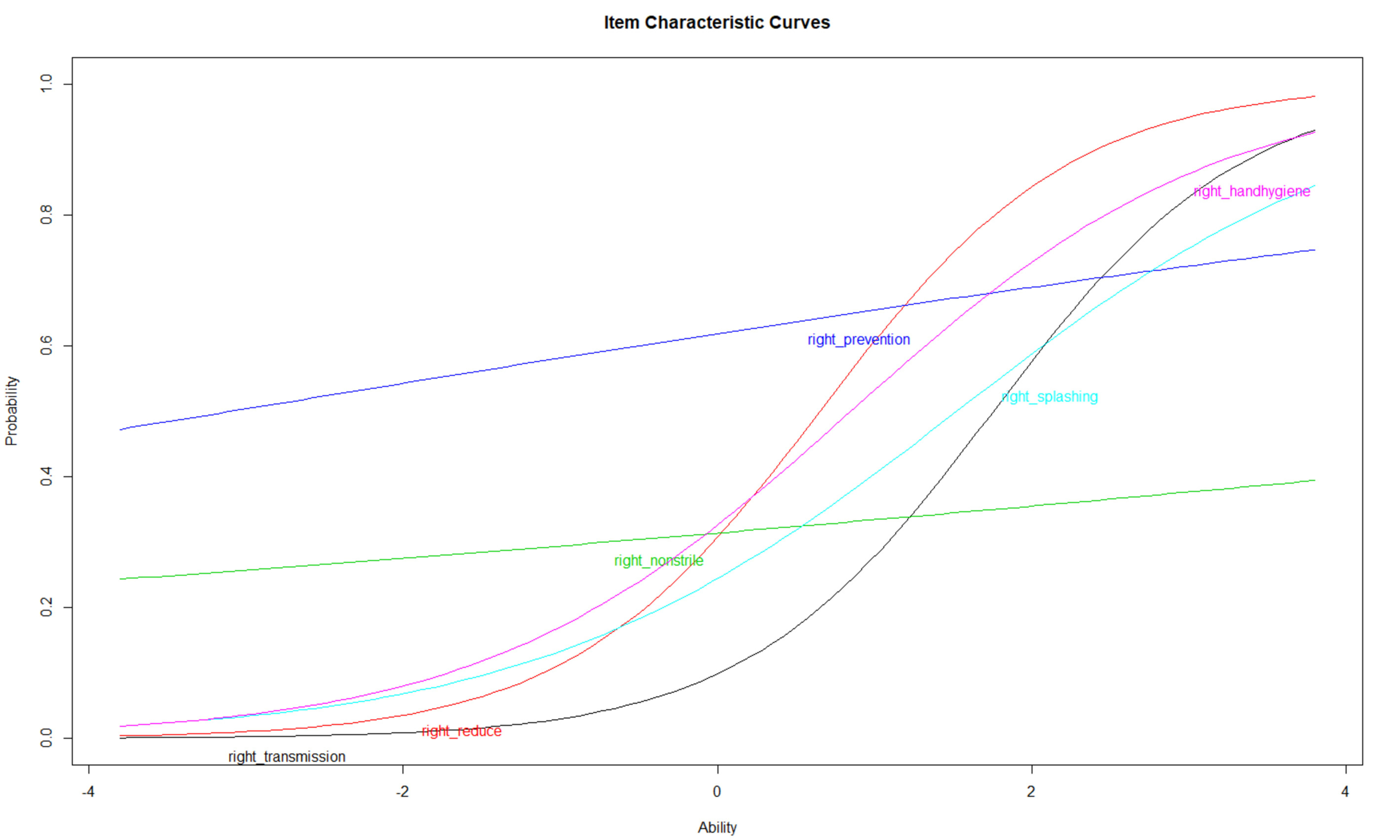 Figure 1. Item-characteristic curves for the single-parameter logistic model of the item response theory.

Table 3. Unadjusted and adjusted means by gender, field of study and year of study

* Adjusted for all variables in the table.

Regardless of the students’ field, many respondents showed a vague knowledge of the standard precaution concept in Kazakhstan (Table 4). Awareness of standard preventive measures increased with a year of study, but only a third of year 5 students were aware of standard prevention (36.3% vs. 17.4% in year 1 students, p<0.001). Most of students of all years of study identified age as a risk factor of NI (Table 4). Awareness of both average proportion of patients suffering from NI and mortality from NI was higher among medical vs. non-medical students (p<0.001).

Table 4. Analysis of responses to perception and attitude questions

Awareness of the average proportion of patients who suffer and would die from NI among medical students increased with a year of study. This could be related to available courses on infection control in individualized education plans. Most students responded that the patient hospital stay due to NI could be extended to 10 days (Table 5).

Table 5. Analysis of responses about the epidemiological situation with nosocomial infection in Kazakhstan

Table 6. Analysis of responses regarding the perceived barriers to compliance with the standard precautions’ guidelines

Prior to our study, there were no other studies conducted in Kazakhstan on standard precautions for NIs and related topics. Our study contributes to the knowledge assessment of Karaganda Medical University students, and also evaluates the adequacy of their training. Our findings agree with some studies on the knowledge of medical students regarding precautionary measures [9, 12, 18, 25-35].

Our results show that general knowledge of standard precautions is unsatisfactory among the studied groups. This finding implies poor level of preparation from the very beginning of studying the topic at a university. The average score of knowledge in medical students was not much different from non-medical students who did not have specialized courses on epidemiology and prevention of NIs in their curriculum. Marginally sufficient score was achieved only by students of years of study 3 and 5, who had a course of epidemiology in their curriculum. The result suggests the inefficiency of the infection control curriculum at the medical university, hence appropriate interventions are needed to improve the situation.

The results of our research are similar to previous studies: they highlighted gaps in the training of medical students pointing at their low level of knowledge on NI. A third of medical students admitted lack of awareness of morbidity and mortality from NI. Interestingly, in many cases, students in our research claimed sufficient proficiency in the concepts of standard precautions, although the score of their knowledge on standard precautions was fairly low. Despite their own judgments on NI awareness, our questionnaires revealed a lack of knowledge on, and attention to, nosocomial infections.

Regarding such results, we suppose that one of their causes is an underestimation of the importance of standard precautions for NIs. As suggested by F. Brosio et al., more efforts should be made to enhance knowledge on NIs [12]. Special training in standard precautions, such as mentoring, good clinical practice modeling and computer-based training package would help improving students’ knowledge and developing major attributes of professional behavior, identity, and values [23, 35, 36].

Absence of the specific national plan on preventing NIs in Kazakhstan could be a possible explanation of limited knowledge on NI among the students. Their poor knowledge could be also explained by the lack of policies and/or guidelines for NIs in the field of infection control, both at the national and institutional levels. As this finding implies, policies on NI prevention are not aimed at developing much better knowledge on standard precautions among students.

Non-medical students in our study served a background to NI knowledge of medical students. However, regardless of the field of study, both groups displayed unsatisfactory awareness of NI. This result points out that current professional training of medical students does not succeed in augmenting their awareness of NIs. Moreover, training of medical students on NIs does not significantly differ from non-medical students. This result is quite alarming finding for the national education and healthcare systems. Educational programs on infection control should be revised for patient safety as well as for improvement of student knowledge. According to A.A. Ibrahim et al., a medical education program should be started at the college level before clinical practice starts, emphasizing the importance of infection control guidelines [9].

One of the limitations was low reliability of the knowledge scale that could have weakened the expected associations.

Our study revealed the inadequate knowledge and awareness of the infection prevention and control guidelines among medical students. Their responses did not suggest high level of knowledge in the field of preventing NIs, compared with non-medical students.

Only through a proper training of medical students, there is a possibility of changing the situation with the prevalence of NIs in Kazakhstan for better. As a recommendation for improvement of the hospital patient safety, this study proposes an introduction of infection control educational programs at medical universities of Kazakhstan. Additionally, there is a need to come up with novel policies targeting major issues of infection prevention at the national and local levels.  Hence, the Ministry of Healthcare, hospitals, medical universities and other interested parties should enhance the knowledge and practices of the standard precautions for nosocomial infections.

Permission for this study was obtained from the Ethics Committee of Karaganda Medical University. A cover letter explaining the purpose of the study and requesting participation was attached to each questionnaire. Signed written informed consent form was received from each participant. Confidentiality and anonymity of the respondents were maintained ensured by encrypting names with codes. The study was carried out according to the guidelines of the Declaration of Helsinki.

The authors state that there was no external funding for this study.

We would like to express our sincere gratitude to the students who participated in our study.

The authors declare that they have no conflicts of interest.