Heart Failure with Multi-organ Thrombosis: A Case of Antiphospholipid Syndrome Co-existing with Cardiomyopathy

romj-2012-0204.pdf
Abstract:
Antiphospholipid Syndrome (APS) is an autoimmune disease featured by venous or arterial thrombosis, fetal losses and thrombocytopenia in the presence of antiphospholipid antibodies. Here we reported one case of antiphospholipid syndrome together with dilated cardiomyopathy. A 46-year-old female patient complaining short of breath was found enlargement of atrial and ventricular compartments. The ecletrocardiogram and blood test revealed anteroseptal myocardial infarction, while no pulmonary thrombosis was present and therefore diagnosis of dilated cardiomyopathy was made. There were also thrombi formed in the cardial chambers and deep venous. During hospitalization, there was an onset of ischemic brain stroke and head MRI showed newly developed small infarctions. An elevation of anticardiolipin immunoglobulin A (ACAIGA) was detected from the blood sample. The patient was discharged after being treated with anticoagulant, corticosteroid and other medicines for improving heart function. In our case, APS is the basic cause leading to multi-organ thrombosis and heart failure is mainly due to dilated cardiomyopathy, thus independent of APS. So this is the first time that cardiomyopathy co-existing with APS was reported.
Keywords:
antiphospholipid syndrome (APS), anticardiolipin immunoglobulin A (ACAIGA), thrombosis, cardiomyopathy
Cite as:
Zhong L, Yang L, Li X, Wei S. Heart Failure with Multi-organ Thrombosis: A Case of Antiphospholipid Syndrome Co-existing with Cardiomyopathy. Russian Open Medical Journal 2012; 1: 0204.

Antiphospholipid Syndrome (APS) is an aquired thrombotic disorder presenting with large vessels thrombosis. The serum anticardial antibodies are considered the golden criteria. The most common detected antibody is anticardiolipin [1]. In 2006, the revised Sapporo criteria   emphasized the importance of persistent positive antibodies and the β2GP-1 antibody was named independent diagnostic criterion [2]. The antibodies involved are long thought to play an important role in the development of the disease, while the exact mechanism is still unknown.

General history: A 46-year-old female patient, complaining progressive dyspnea for 6 months with a lump on her right neck for one week, was admitted to our hospital.

Previous medical history: one month ago, the patient received coronary angiography and right heart catheterization in another hospital (name unknown) for suspecting coronary heart disease, while the results were negative and she was discharged with the diagnosis of heart failure and premature ventricular contractions (PVCs).

Physical examination: Respiratory rate: 18 times/min; heart rate: 102 beats/min; blood pressure: 90/60 mmHg. There was a lump (1cm*1.2cm) on her right neck. Jugular vein distention and enlargement of the heart border were present. No other positive signs were detected. 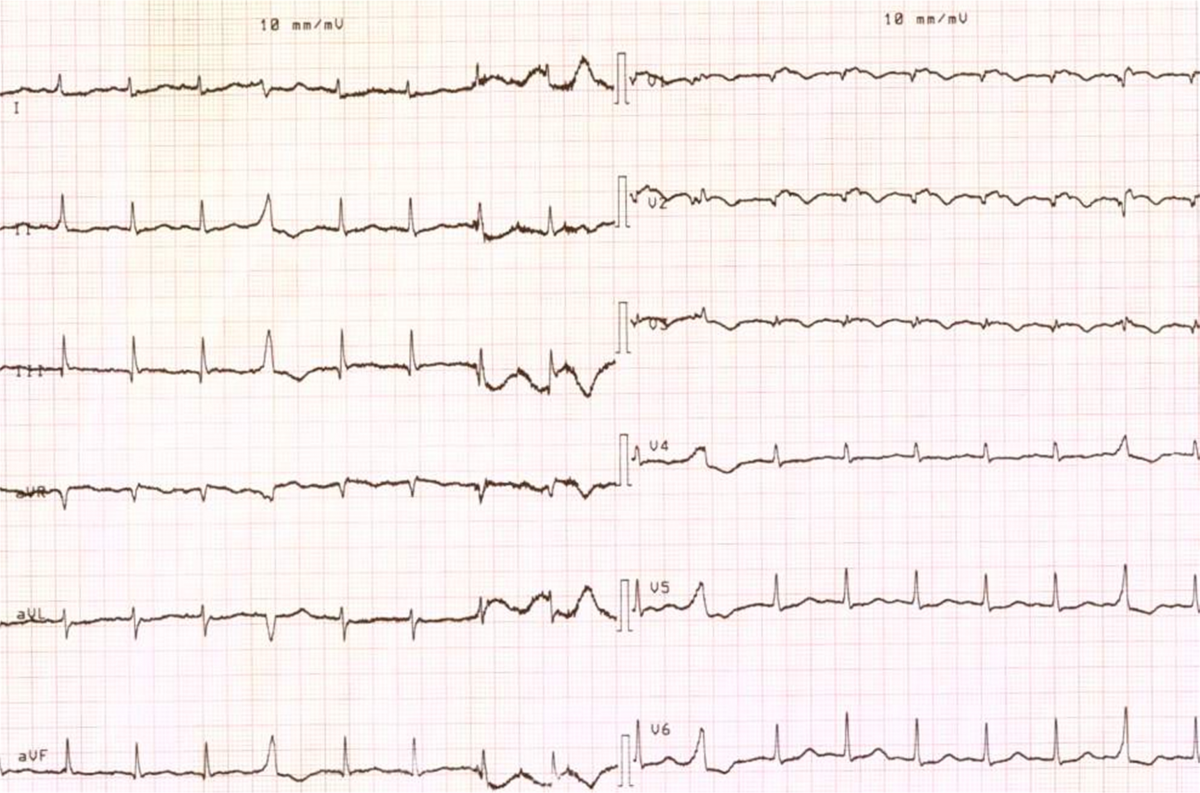 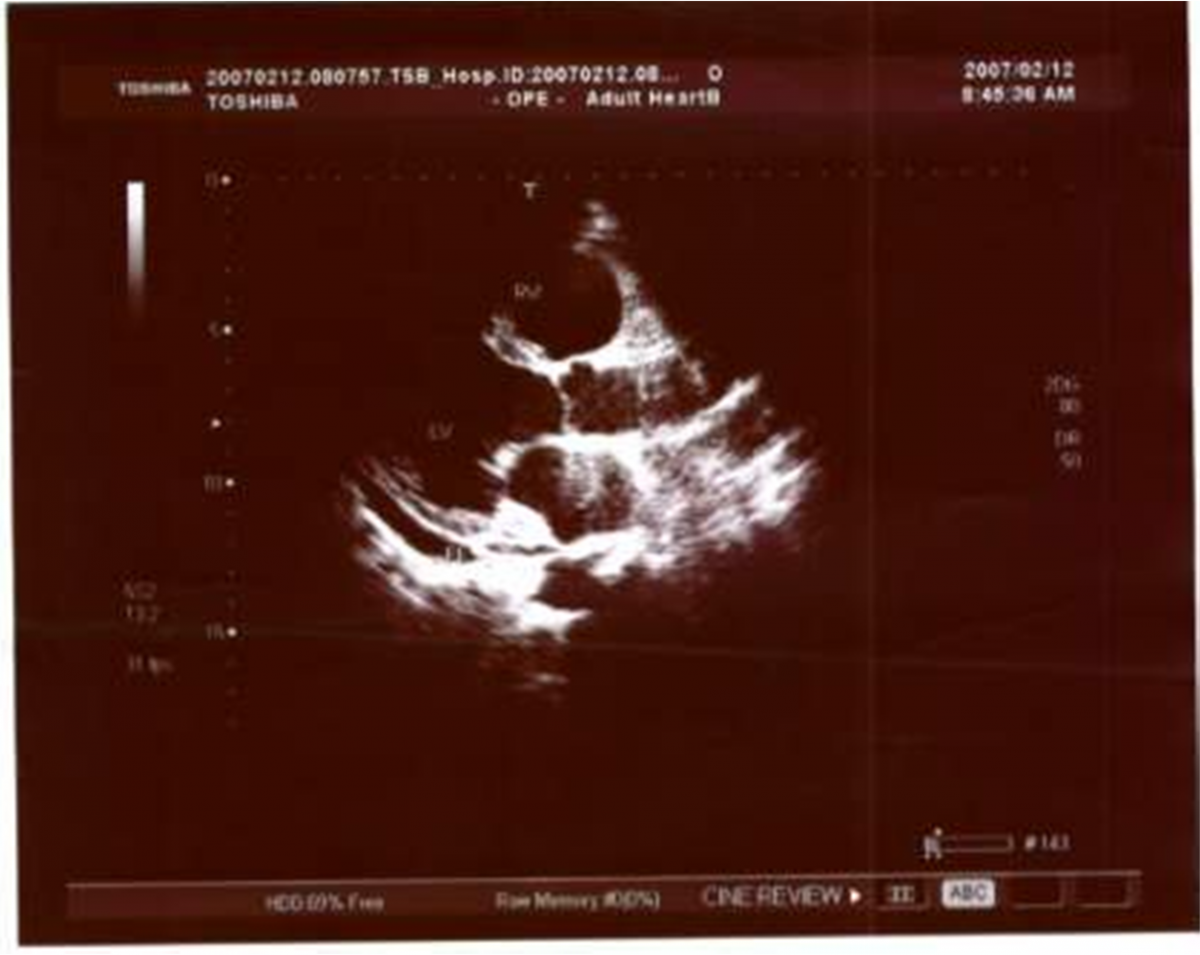 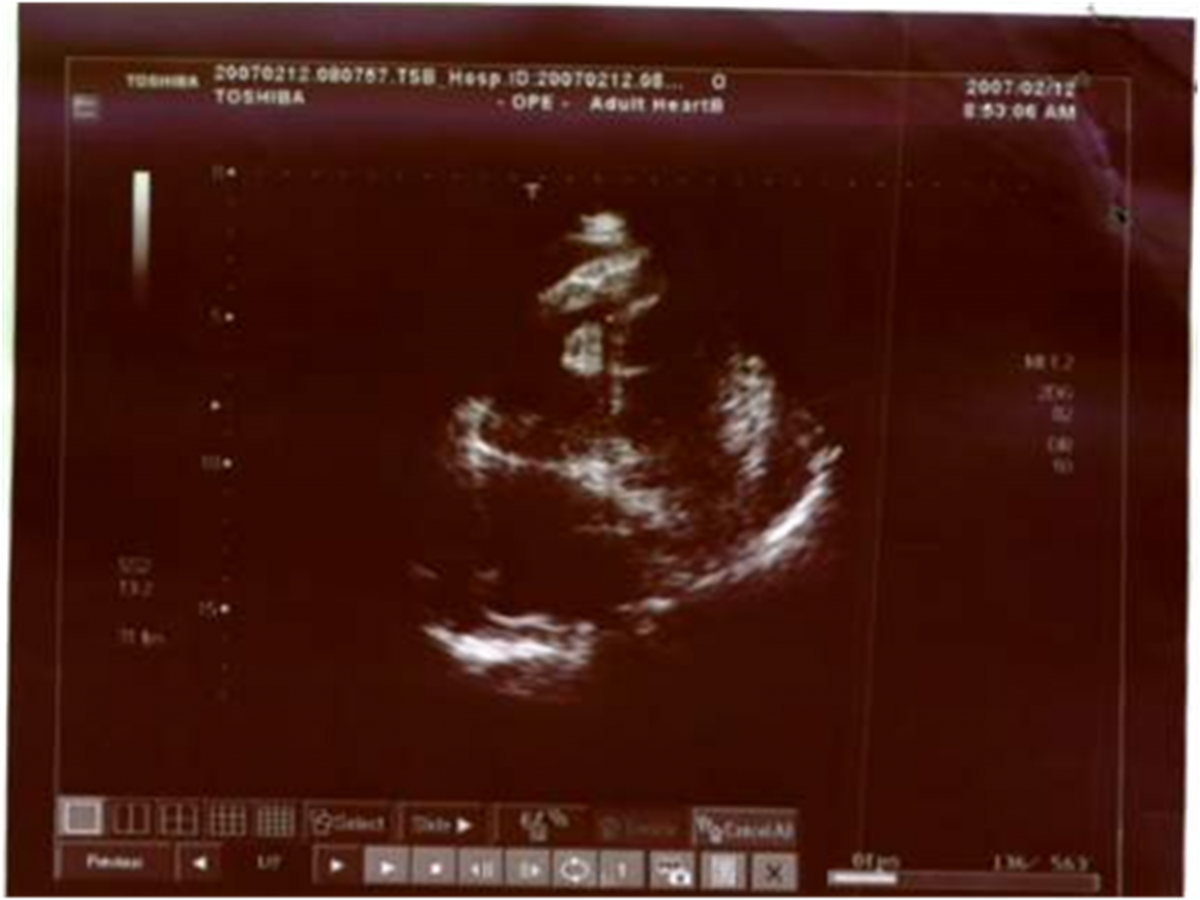 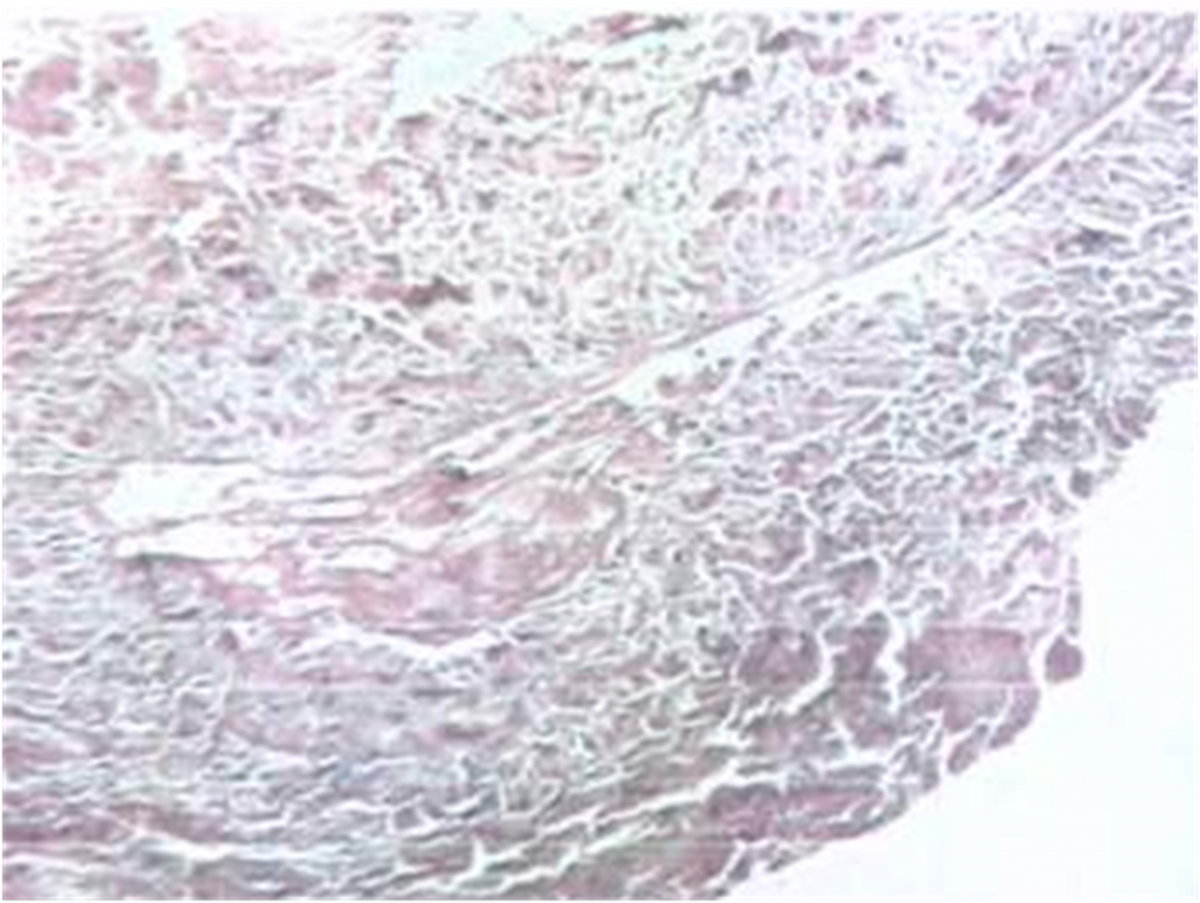 Figure 3. Pathological section of the lump on the right neck of the patient showed: venous thrombi.

Primary diagnosis was acute myocardial infarction, heart failure and PVCs. Aspirin, clopidogrel and atorvastatin were administrated together with medicines to improve heart function. On the third day, the patient had an onset of paroxysmal right limbs paralysis for 13 hours. The head MRI showed newly developed small infarctions. Immunomarkers showed an elevation of anticardiolipin immunoglobulin A (ACAIGA). Anticoagulant (warfarin) and corticosteroid were applied and 10 days later the patient was discharged.

As more antiphospholipid syndrome (APS) cases reported, did we understand that more organ dysfuctions could be related to APS. From clinical aspects, it is divided into nonthrombotic, catastrophic and microangiopathic APS [6]. Sometimes it is asymptomatic, while in some rare occasions, it is also lethal. Though it is often encountered clinically, the mechanisms of it are still conjectural. Inflammation, arterosclerosis and complements were all ever thought to have something to do with APS, while no affirmative proofs have been aquired [7-9]. Therefore, what we can do is just to alleviate related symptoms. According to the updated reviews, prolonged oral anticoagulant was recommended in APS patients with venous thrombosis at a target International Normalized Ratio (INR) of 2.0 to 3.0 and >3.0 for those with recurrent and/or arterial events [10]. Based on the potential mechanisms of APS, statins that inhibit inflammation and angiogenesis-converting enzyme inhibitors that regulate monocyte tissue factor expression are expected to be the candidates in terms of APS treatment.

Our case has many featured aspects which are in common with other cases regarding APS. The most interesting point is that it is hard to explain biventricular failure with APS, thus leading us to propose that it is cardiomyopathy co-existing with APS. Anyway, among all the cases related to APS, the symptoms always could be elucidated with APS, i.e. vessels thrombosis. Like other autoimmune diseases, blood vessels are always the targets, resulting in vessels narrowing or even occlusion, end-organs ischemia and eventually multi-organ failure. Myocardial infarction, ischemic stroke, venous thrombosis and thyroid dysfunction in our case were all APS related, while the progressive dyspnea caused by biventricular heart failure was not. Pulmonary vascular angiography and computer tomography indicated no pulmonary thrombosis and other pulmonary diseases were present. The left heart failure couldn’t be due to the myocardial infarction either. So our case is the first time to report cardiomyopathy co-existing with APS.

Author's version of the text