romj-2012-0210.pdf
Abstract:
The purpose of the article is to identify the most characteristic and significant changes of magnetic resonance indicators in patients with the urinary bladder cancer during diffusion-weighed whole-body imaging (DWIBS). Materials: From September 2009 till April 2011 98 patients have been examined: 61 (62.2%) with morphologically verified bladder cancer and 37 (37.8%) with cystitis. Results: The study has revealed that the sensitivity of DWIBS investigation in detecting bladder cancer is 98.36%, specificity is 10.81, and the efficacy is 65.38%. Conclusions: DWIBS is an informative noninvasive method for screening diagnostics of bladder cancer, as well as for identificating suspicious areas of regional and distant metastases.
Keywords:
urinary bladder cancer (UBC), diffusion magnetic resonance imaging (DMRT)
Cite as:
Popkov VM, Chekhonatskaya ML, Zuev VV, Ponukalin AN, Nikolsky YE. Magnetic resonance diffusion-weighted whole-body imaging (DWIBS) in the urinary bladder cancer diagnostics. Russian Open Medical Journal 2012; 1: 0210.

Primary neoplasms of the urinary bladder account for 2-6% of all tumours [1]. Due and adequate diagnostics of the urinary tract diseases still remains a complex and actual problem of ooncology [2].

Diffusion-weighted magnetic resonance tomography (DMRT) which provides functional information can be used in detection and characterization of pathological processes in the area of investigation including malignant tumours. The proposed Diffusion-Weighted Whole-Body Imaging with Background Body Signal Suppression (DWIBS) depicts the whole body volume diffusion. This new conception possesses unique characteristics, differs from standard DMRT and is capable to play an important role in screening diagnoistics of oncological diseases [3].

The aim of the study is to identify the most significant magnetic resonance (MR) iindicators and DWIBS investigation capabilities in diagnostics of the urinary bladder cancer (UBC).

During the period from September 2009 till April 2011 there were examined 98 patients at the age of 45-81 suspected of the urinary bladder cancer: 78 males (80%) and 20 females (22%). All the patients were admitted to the Scientific Research Institute of Clinical and Fundamental Uronephrology and Urological Clinic of Saratov State Medical University. 45 patients (45.9%) complained of painful and frequent urination, 53 patients (54.1%) demonstrated the signs of macrohematuria.

MR investigation was performed on thre apparatus PHILIPS of 1.5 T magnetic field power with application of the "Body-array" roll for the body. The protocol of MR investigation consisted of two consequent steps. During the first step there was performed standard iinvestigation (T2WI, T1WI, T2WI with fatty tissue signal suppression in three mutually perpendicular planes and VISTA sequence in the axial plane) in order to detect preliminary tumour localization and visualize regional metastatic areas (Table 1).

T2WI with f.t.s.s. is T2WI with fatty tissue signal suppression.

DWIBS investigation resulted in three blocks of native axial scans visualizing the region from the upper third of the thigh up to the head with the possibility of native data processing and three-dimensional inverted image constructing (Fig. 1). 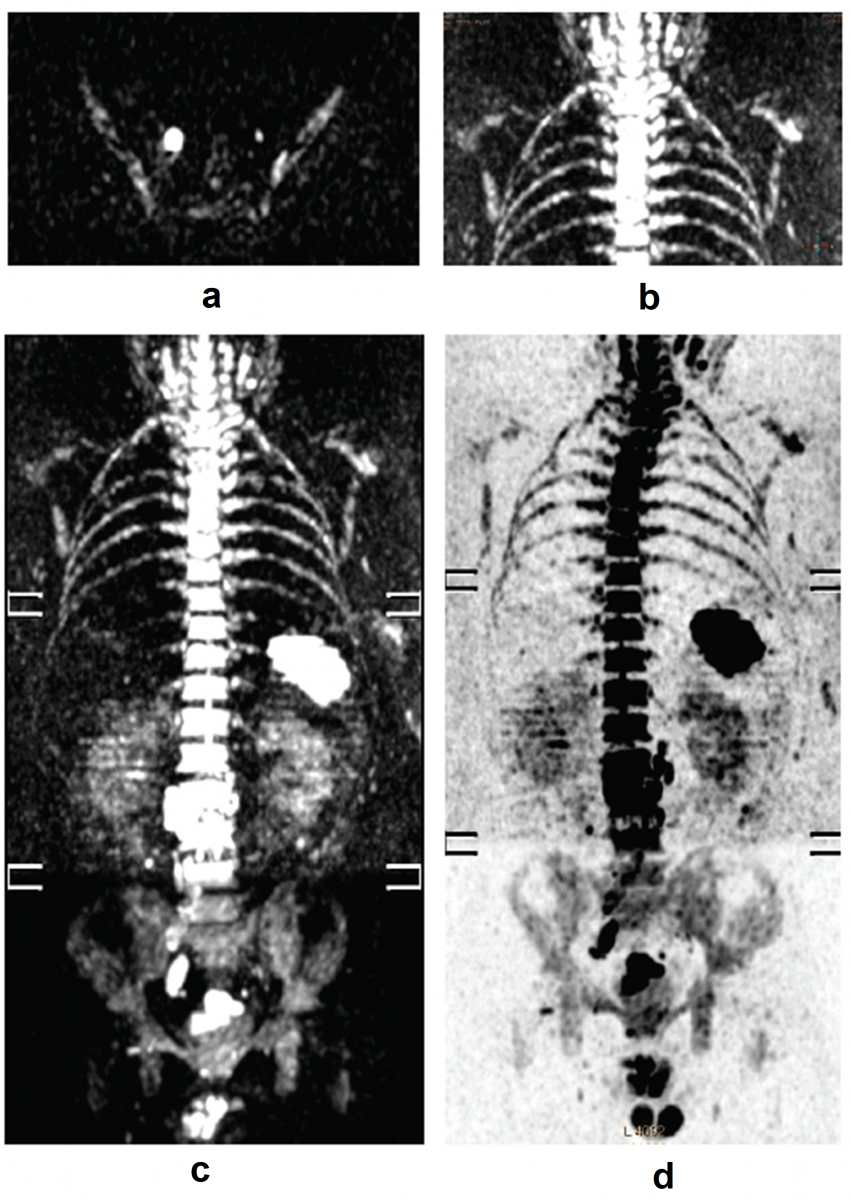 MR semiotics of the detected bladder wall changes in patients of the basic and comparison groups is given in Table 2.

Table 2. MR semiotics of UBC and cystitis in routine MR investigation of the pelvis organs

The analysis of the obtained data showed that independently of the pathological process stage lateral bladder walls were impaired more frequently; in stages T1, T3 and T4 - predominantly the right bladder wall: in 48.4%, 57.1% and 66.6% of the patients respectively. Diffuse bladder walls impairment was detected in cystitis.

With advancing of the stage of tghe disease frequency of occurance of local bladder wall thickening in the area of the pathological formation increased: in T1 – 51.5%, in T2 – 94.4%, in T3 and T4 - 100%. Change of MR bladder wall signal was detected in 42.4% of patients with stage T1, in 94.4% patients with stage T2, in 100% of patients with stages T3 and T4 of the disease. The same tendency was detected when evaluating the formation structure homogenity and enlarged regional lymphatic nodes detection frequency. Regularity of external bladder wall contours in stage T1 was 100%. In stages T3 and T4 external bladder walls in all cases were irregular which corresponded to the verified stages of the pathological process. False signs of spread into the paravesical fat were detected in 6 patients (33.3%) with stage T2. However, in routine MR investigation the possibility to evaluate distant changes in patients with UBC was lacking.

Later comparison and native T2WI with high resolution and images of DWIBS investigation were carried out. Detection of areas with increased signal on native images and with decreased signal on three-dimensional inverted images was the criterion of DWIBS images evaluation. MR signal increase during native DWIBS investigation was normally detected from the brain structures, salivary glands, tonsils, spleen, gallbladder and small intestine (Fig. 2). 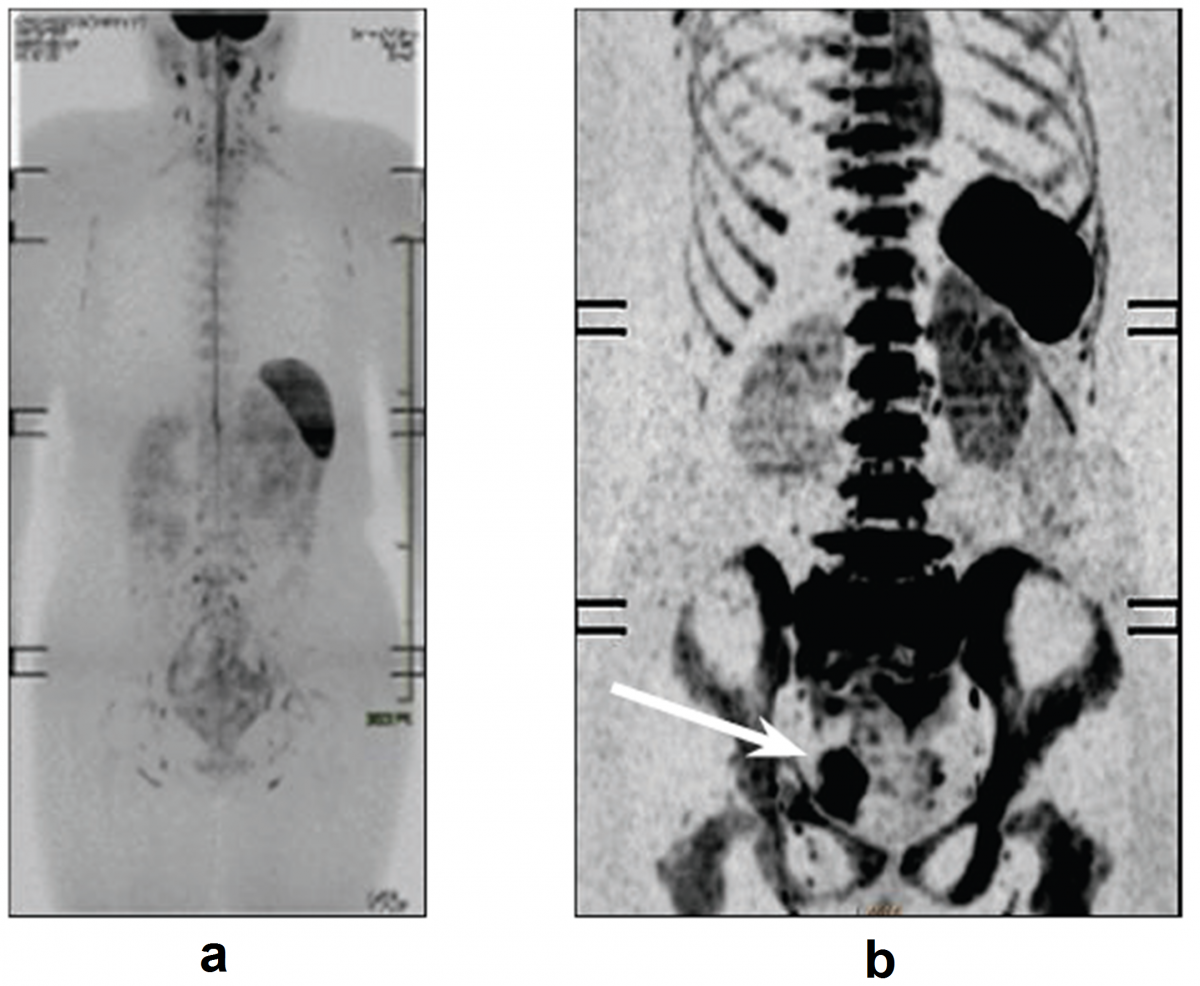 The data obtained during DWIBS investigation are given in Table 3. MR signal increase both from the pathological urinary bladder formation and regional and distal lymphatic nodes swas detected in 60 patients (98.4%) of the basic group.

Table 3. MR semiotics of UBC and cystitis in DWIBS investigation

In the comparison group signal increase from the urinary bladder wall was not observed in 4 patients (10.8%). During DWIBS investigation of the patients with stage T2 of UBC irregular external bladder wall contours in the area of the malformation (false MR sign of the formation spread into the paravesical fat) were detected in 1 patient (5.6%), while during MR investigation - in 6 patients (33.3%) (Fig. 3).

The results of the carried out investigation demonstrate that DWIBS study sensitivity in detecting urinary bladder cancer is 98.4%, specificity – 10.8%, diagnostic effectiveness of the method – 65.4%. 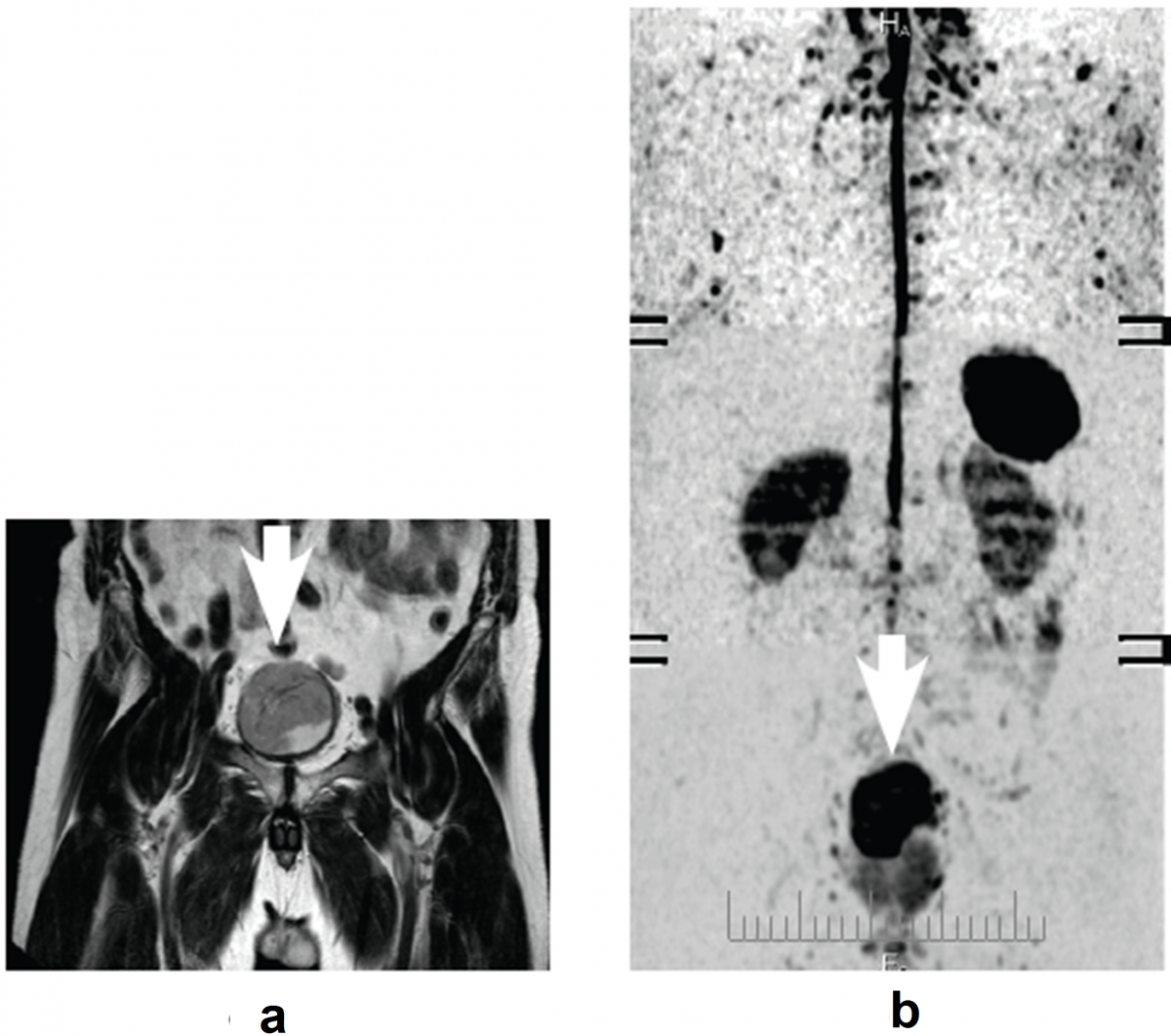 Figure 3. MR investigation: T2 WI-image (a) and DWIBS-image (b). The arrow indicates bladder wall formations, which has a homogeneous structure (T2 stage according TNM). External contours of wall formations is rough on T2 WI –image (signs distribution in perivesical tissue) and is smooth on DWIBS-image (no signs distribution in perivesical tissue).

For a long time diffusion magnetic resonance tomography (DMRT) was used only for investigation of the brain.

Extracranial DMRT was complicated by multiple artefacts from the movement and magnetic receptivity which resulted in the loss if diagnostic significance of the given investigation [2]. Increase of gradients and appearance of new multichannel rolls almost solved that problem, but up to the recent time extracranial DMRT was obligatorily carried out at the breath holding, because respirarory movements were the obstacles for DWI due to the shifts during the internal organs respiration [4].

T. Takahara et al. in 2004 reported about a new unique conception of the whole body DWI called "diffusion-weighted imaging of the whole body with the background body signal suppression" (DWIBS) [5]. Most researchers report that DWIBS investigation is a means for detecting lymphatic nodes independently of their histological composition [5, 6]. The present study supports this viewpoint.

The results of the carried out study show that sensitivity of DWIBS investigation in detecting bladder cancer is high (98.4%) but low specificity parameters (10.8%) allow to judge rather about screening role of the given technique in complex diagnostics of the urinary bladder cancer.Rather significant results of the investigation, to our opinion, are relevant differences in detecting MR signs during DWIBS investigation and routine MRT of false spread of the bladder wall formation into the paravesical fat, which allows to differentiate stages T2 and T3 of the urinary bladder cancer.

Evaluation of the bladder neoplasm, possible regional and distant metastases allows to consider another way of potential DWIBS application - as the means of radiation- and chemotherapy effectiveness evaluation. DWIBS investigation makes it possible to visualize the signs and characteristics of the detected areas of alterated diffusion and to reveal pre-structural frunctional changes associated with the tumour [7].

DWIBS investigation in a number of cases verifies stages of the pathological process, i.e. allows to differentiate stages T2 and T3 of the urinary bladder cancer. Considering high sensitivity and low specificity of DWIBS investigation the described noninvasive informative technique could be used, basically, in screening diagnostics of UBC and in determining indications for expansive anatomical magnetic resonance tomography.