romj-2014-0404.pdf
Abstract:
Infantile hepatic hemangioma is a tumor arising from the mesenchymal liver tissue. Presentation varies from being asymptomatic to having life threatening complications. They can manifest as solitary or multicentric lesions. We hereby, report a one and half month old child who presented with respiratory distress and was incidentally found to have a liver mass, which eventually was diagnosed as infantile hepatic hemangioma and successfully treated with propranolol.
Keywords:
hepatic hemangioma, propronalol, liver biopsy, benign, liver tumors
Cite as:
Najmuddin F, Sharif M, Kotrashetty V, Patel H, Puskur D. Infantile hepatic hemangioma: a diagnostic dilemma. Russian Open Medical Journal 2014; 3: 0404.

In children, hepatic tumors account for about 5-6% of all intra-abdominal tumors. Usually the primary paediatric tumors are malignant. Infantile hepatic hemangioma (IHH) is a common benign tumor which usually presents at around 6 months of age [1]. The pathophysiology has been attributed to genetic mutations in angiogenesis-related protein expression [2]. There are mainly three phases which includes an initial proliferating phase lasting for approximately 9-12 months, then an involuting phase, where there is apoptosis of the rapidly dividing endothelial cells followed by an end stage of fibrofatty tissue.

The clinical presentation may vary from the tumor being clinically silent, noticed while a routine prenatal or postnatal imaging for some other cause, or as life threatening complications such as congestive cardiac failure, fulminant hepatic failure, hypothyroidism or abdominal compartment syndrome [3-5].

A one and half month old male infant born of non- consanguineous marriage came with complaints of acute onset of rapid breathing since one day. There was no history of fever, cough, coryza, cyanosis, ear discharge or refusal to feed. There was a similar history one week back, for which the child was given medications in form of nebulisation. The infant’s birth weight was 2750 gms, on exclusive breast feeds with a non significant antenatal as well as postnatal history. The child was immunized for age and was developmentally normal.

On examination, he had a heart rate of 120/minute, respiratory rate of 62/minute with subcostal and intercostal retractions. Child was afebrile with a normal blood pressure.

On anthropometry, his length was 57 cm, weight of 4700 gms and head circumference of 37 cm. There was pallor with open anterior fontanelle measuring 2.5x3 cm.

On respiratory examination, bilateral conducted sounds were heard in all areas, and per abdomen revealed hepatomegaly measuring 8 cm below the right costal margin, hard in consistency, span of 9 cm, moving with respiration, regular borders, and a palpable left lobe of the liver. Spleen too was palpable, 1 cm below the left costal margin, soft in consistency, moving with respiration.

Ultrasonography of the abdomen revealed an ill defined heterogeneously hyper echoic lesion measuring approximately 7.0x5.0x5.6 cm in the right lobe of liver in segment V and VI. The lesion was indenting the upper pole of right kidney, suggesting that the mass might be a neuroblastoma.

Based on these findings we planned for computed tomography (CT) of the abdomen and sent a urinary vanilyl mandelic acid (VMA) which was normal – 0.50 mg/24hrs. CT abdomen revealed a large heterogeneously enhancing lesion measuring 7x5.9x5.3 cm seen in segment V and VI of liver with multiple chunky calcifications within. The lesion showed multiple central non enhancing areas within suggestive of necrosis. The lesion was postero-inferiorly abutting the right adrenal gland, right kidney and inferior vena cava. Anteriorly it was abutting right branch of portal vein. Inferiorly displacing the bowel loops which might be  suggestive of a hepatoblastoma (Figure 1). Serum alfa fetoprotein level was increased – 181 ng/ml. As both the radiological investigations were inconclusive, we planned for a liver biopsy which revealed the diagnosis of infantile cellular hemangioma, which on immunohistochemistry showed vascular channels being highlighted by CD31 and CD34. 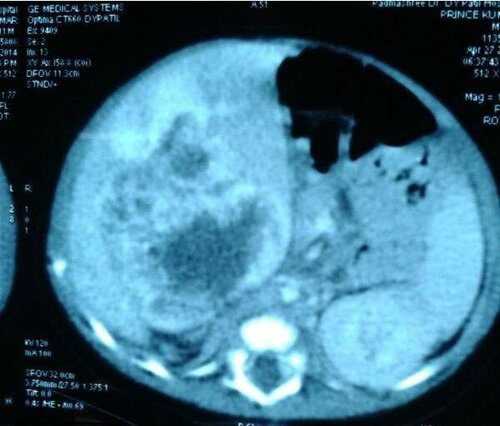 The child was therefore given symptomatic treatment and was planned to start on tablet propronalol (1 mg/kg/day), as the mass was not regressing.Baseline investigations before initiation of treatment with propronalol was performed. A normal electrocardiogram (ECG) and 2D-echocardiogram were documented along with serum electrolytes, renal function test and coagulation profile.

On follow-up the child is asymptomatic and gaining weight with progressive reduction of the hemangioma.

Hepatic hemangioma has got several nomenclatures such as cavernous hepatic hemangioma, infantile hemangioendothelioma, mutlinodular hepatic hemagiomatosis. Though IHH is a benign tumor, malignant transformations of the same have been reported [6, 7]. The various clinical manifestations of IHH, depend upon the tumor size, localization and complications [3]. In our case, the child had respiratory symptoms due to which the mass was noticed on routine examination. Usually the initial investigation in such a case is an ultrasonography of the abdomen, but in our case it was reported as neuroblastoma, which prompted us to go ahead with a CT scan abdomen being reported as hepatoblastoma, hence we decided to perform a biopsy of the same. The closest differential diagnoses of IHH are hepatoblastoma, metastatic neuroblastoma and mesenchymal hamartoma [6]. In hepatoblastoma, the alpha-fetoprotein (AFP) levels are persistently, markedly elevated and in metastatic neuroblastoma, urinary levels of catecholamines are elevated along with an adrenal mass [8]. Hamartoma is usually a congenital malformation which appears to be cystic or multicystic.

It is sometimes impossible to distinguish between these three tumors as was evident in our case [9]. The IHH in our case presented as an extensive hepatic involvement, nearly replacing most of the hepatic parenchyma. It is therefore, very crucial to treat and monitor these patients, as they have the tendency for a more stormy clinical course compared to those with solitary or multifocal tumors. In text, two types of histopathological findings have been defined, type I which is often calcified and type II which is more disorganized and pleomorphic therefore, speculated to be a more aggressive and potentially malignant form of IHH [6]. Medication in the form of oral Propronalol has been very successful in treating IHH [10]. An incremental dosage increase regimen is followed with close monitoring of tumor regression by serial USG’s. In literature, it has been used for treating hepatic hemangiomas as late as 10 months after birth [11]. Parents should be educated regarding the common side effects like bradycardia, hypoglycaemia and hypotension.

Though IHH is a benign tumor, it can present as a diagnostic dilemma for the treating doctor. Ours was one of those few cases, in which biopsy was required as the radiological investigations were inconclusive.