romj-2017-0102.pdf
Abstract:
The aim of our study was to compare height and weight parameters of the children aged 1-14 years old in Voronezh region of the Russian Federation for the following periods: 1997-1999 and 2011-2014. Material and Methods ― The research was held for 4,940 healthy children in 2011-2014 and 10,247 children in 1997-1999. Body height and weight were examined using standard methods. The percentile method was used to determine percentile corridors as follows: 3rd, 10th, 25th, 50th, 75th, 90th, 97th and perfom comparative analysis. Results ― The children of Voronezh region in 2011-2014 had higher rates of growth reference in comparison with the same data in 1997-1999. The biggest difference in the parameters of height of boys and girls was at 1.0-4.5 years-old group (p<0.05). The most significant difference in weight was at the age of 4-10 years old. It is interesting that growth reference of girls at the puberty period (14 years old) does not change in comparison with 1997-1999 period. Conclusion ― We found that today decade weight of children is significantly higher than that of the children at the end of the previous century. These data reflect fact of acceleration and obesity and overweight problem among the children in the modern world.
Keywords:
adolescence, child development, growth, obesity
Cite as:
Nastausheva TL, Zhdanova OA, Minakova OV, Logvinova II, Ippolitova LI. Comparative characteristics of children physical development in Voronezh Region of the Russian Federation for 15 years. Russian Open Medical Journal 2017; 6: e0102.

Height and body weight measurements are very important characteristics describing physical development and health of children of any age. These measurements are influenced by acute and chronic diseases, environmental factors, nutrition and social factors [1]. The development measurements under research are constantly changing due to the changes in life conditions, nutrition and health service quality. The investigations held in 1997-2003 by World Health Organization (WHO) revealed that children’s growth and development were an indicant of some negative health condition [2]. In 1970s-1980s, an acceleration phenomenon was described [3]. Later in 2000s, there were some thoughts about physical development deceleration [4]. For the correct analysis of the children’s health state we need regular measurements of physical development held using a special program. This research gives an opportunity to study the measurements dynamics through time and to calculate regional standard growth and development data. This information helps solve many scientific and social problems in the region such as furniture and clothes size identification for children. This research helps analyze social and economic conditions and environmental influence on socially significant diseases. It brings up a matter of a social target program for children health enhancing.

The investigation aimed at comparison of the growth data for the children at the age of 1-15 years in Voronezh region of the Russian Federation for the following periods: 1997-1999 and 2011-2014.

The research was held for 4,940 children from 1 to 14 years old in Voronezh region (Russia) in 2011-2014. There were taken 2,500 (50.5%) boys, 2,440 (49.5%) girls. Data obtained during routine medical examinations in Pediatric Polyclinics №3 and №10 in Voronezh city and in the Health Centre of Voronezh Regional Children's Clinical Hospital №1 are used. Whole school classes with children from districs of Voronezh region were examined in the Health Centre, and therefore a representative selection of the school children was received.

These analysis data were compared with the same data taken in Voronezh region in 1997-1999, which included 10,247 children [5]. The present study and the previous study were conducted using uniform methodology of measurement and subseguent analysis of the data. In 1997-1999 children’s examinations were performed in Pediatric Polyclinics №3, №10, and №11 in Voronezh city and in Pediatric Outpatient Departments of Central District Hospitals of Voronezh region (Russia). All the measurements were held by specially trained medical staff using a standard method [6].

The children with chronic diseases influencing growth and development and premature newborns were excluded from the research. The percentile method was used to determine percentile corridors as follows: 3rd, 10th, 25th, 50th, 75th, 90th and 97th. For comparison of our data with the previous ones the same percentile corridors were used as analyzed in 1997-1999.

All stages of the study approved by the Ethics Committee of Voronezh State Medical University n.a. N.N. Burdenko (Voronezh, Russia). Before inclusion in the study all participants gave written informed consent. 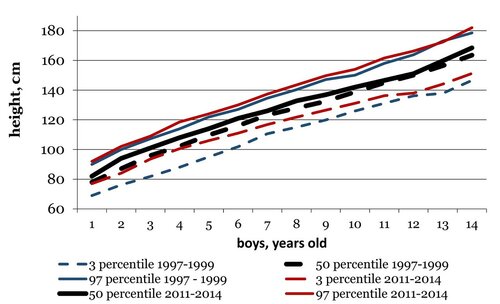 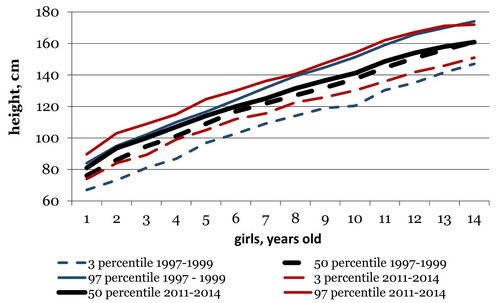 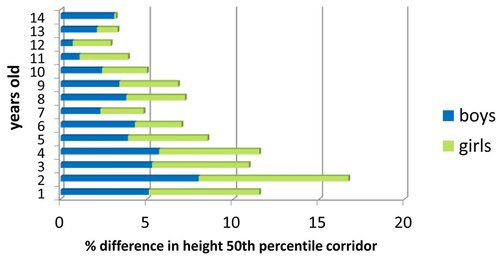 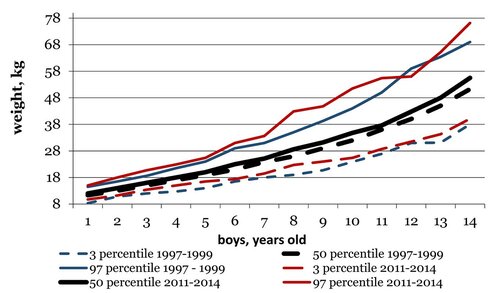 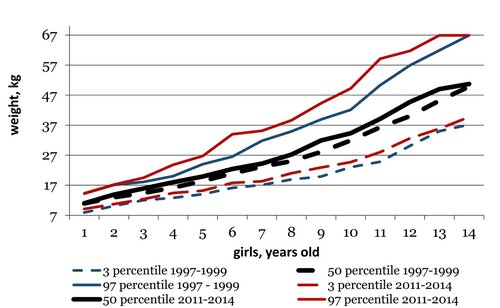 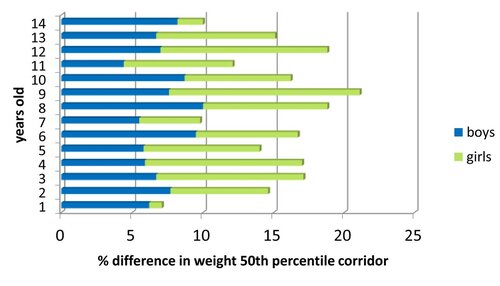 The same as the body height rate, the girl’s body weight parameter at the age of one year and 14 years old were nearly the same as it was in the research in 1997-1999.

At 90th and 97th percentile corridors, body weight values for boys and girls were significantly higher than the same parameters for the same age groups in 1997-1999. This fact means that nowadays there is an increase in number of children with higher body weight parameters.

The research shows that the children of Voronezh region in 2011-2014 had higher rates of growth reference in comparison with the same data in 1997-1999. The biggest difference in the parameters of height of boys and girls was at 1.0-4.5 years old age group. Body weight values for boys and girls in 2011-2014 were higher in all age groups than the same parameters in 1997-1999. The most striking difference was at the age of 4-10. Also the final data of girls’ growth reference at the puberty doesn’t change in comparison with 1997-1999 period. Boy’s growth reference changes during the periods under research. The results we received were changed in accordance with modern conditions, such as lifestyle, nutrition and social factors. We compared our results with studies performed in other Russian regions. Most of the carried out research of children’s physical development in our country indicate an increase in values of height and weight of children at the present stage compared with previous years. Research, held in Nizhny Novgorod, showed an increase in height and weight of today's schoolchildren compared to regional standards in 2002 [7]. Modern schoolchildren in Moscow region were outperformed their coeval in 1980-1990 on based anthropometric parameters [8]. These data prove the fact of obesity and overweight problem among children in the modern world [9-11]. We need to investigate research and compare the physical development values for adolescents at the age of 15-18 years old.

Modern children had higher rates of height in comparison with the same data at the end of the previous century. The biggest difference in the parameters of height of boys and girls was at 1-5 years old age group.

The weight of modern children is significantly higher than that of the children at the end of the previous century, especially at the age of 4-10. Obesity and overweight are the important problem among the children in the modern world.

The authors report no conflict of interest.