romj-2017-0209.pdf
Abstract:
Background — Periodontal diseases in adolescents are considered to be of current interest, since the incidence of these conditions tends to increase. Children being in the period of intensive growth are especially exposed to these conditions. Recent studies of molecular morphological disorders occurring in children with chronic catarrhal gingivitis indicate the need of immunocorrectors application in the complex treatment of patients with these disorders, that helps improve both periodontal tissue status and general health. Material and Methods — 157 children aged 12–15 years were examined. Physical examination of a child included past medical history findings and oral cavity examination. Russian Medical Association (RMA) index was used to diagnose gingivitis; Green–Vermillion index was used to evaluate oral hygiene status. Results — Changes in the general health of adolescents suffering from periodontal diseases are reported to give evidence of host defense mechanism decrease. Therefore, the treatment is stated to obligatory affect both – the inflammatory process itself and the entire immunity increase. In that case, immunocorrectors application, namely “Imudon”, is regarded to be the most reasonable measure. “Imudon” is known to affect the recovery of the regular residential flora in the human oral cavity and has the anti-inflammatory effect as well. “Imudon” application leads to reduction of mucus periodontal pathogens amount. Dissolving in the oral cavity these tablets activate host defense mechanism. Due to excipients active components of this medication remain in the oral cavity for a long-term period. Conclusion — There was established the correspondence between blood plasma immunological indication changes in children with chronic catarrhal gingivitis receiving “Imudon” therapy before and after treatment.
Keywords:
gingivitis, adolescents, treatment, immunocorrectors
Cite as:
Ippolitov YA, Garkavets SA, Rusanova TA, Yudenkova SN, Kuralesina VP, Aleshina EO, Plotnikova YA, Chan CC, Manshin ES. Local immune disbalance correction of the oral cavity as a part of chronic catarrhal gingivitis complex treatment in children. Russian Open Medical Journal 2017; 6: e0209.

Periodontal diseases are considered to be one of the most common maxillofacial disorders. Incidence of gingivitis is almost 100%, children and young people up to 25–30 years being affected mostly. Development and implementation of successful treatment methods of periodontal diseases are critical part of national and foreign studies during the last 20 years [1-5]. Microbial factor, which is identified as dental plaque or soft dental deposits in clinical practice, appears to be the main etiological factor of gingivitis. Development of clinical instant testing investigating structure and/ or content of gingival crevice and oral fluid, prediction of remission duration and exacerbation based on microbiological findings, is very important in oral microbiology. Thus, studying of factor microbial homeostasis is of great theoretical and practical significance currently, because it reveals interaction mechanisms between microorganisms and tissues in the oral cavity [2-6]. Chronic gingivitis in children is stated to be of special interest for the prevention and treatment of periodontal diseases. Pharmaceutical efficiency is defined by the fact how fast they can eliminate the causative factor, or make its negative impact impossible, and by the absence of recurrences in children. There exists the problem of insufficient effectiveness of the methods of treatment applied currently. Aspects connected with the chronic catarrhal gingivitis therapy appear to be cross-sectoral issues between dentistry and therapy. Periodontal medicine (the term was first used by Offenbacher in 1998) is regarded as a new section of periodontology, which investigates mutual impact of systemic diseases and inflammatory periodontal diseases to develop new diagnostic criteria, therapy strategies and the integral preventive program of periodontal diseases [1, 4, 7, 8]. Recent research studies of molecular morphological disorders arising under chronic catarrhal gingivitis in children detect the necessity of the immunocorrectors’ application in the complex therapy of such patients that allows affecting both periodontium and the whole body.

All interventions carried out during the research study were approved by the Ethical Committee of the Voronezh N.N.Burdenko State Medical University (Protocol № 5, May 20, 2012).

Furthermore, the group of adolescents under investigation with chronic catarrhal gingivitis was divided into two groups: children who underwent the immunocorrectors’ therapy (62 children) and children who lacked such a therapy (31 children).

Table 1. Distribution of children according to the incidence and severity of gingivitis

Physical examination of a child included past medical history findings and oral cavity examination.  Papillary-marginal-alveolar index (PMA) [9] in the modification of Parma (1960) [10] was used to diagnose gingivitis; Green–Vermillion index [11] was used to evaluate oral hygiene status.

Shedding of microorganisms from their natural habitat – oral cavity tissues and fluids – was carried out by the culturing of the materials under investigation on artificial media. The method used is called culture-based investigation. Radial immunodiffusion, or Mancini method [12], was used to reveal changes of plasma immunological indicators in children with chronic catarrhal gingivitis.

Preventive and curative interventions were performed on the following schedule:

The 1st stage has been reported to be the clinical diagnosis of the disease: evaluation of the oral hygiene status using Green-Vermillion index, evaluation of periodontal tissue status using PMA index. Laboratory methods of investigations consisted of microbiological study of the gingival crevice and oral fluid content, and the investigation of plasma immunological indicators in children with chronic catarrhal gingivitis before the application of the immunocorrectors therapy.

The 2nd stage was stated to include complex therapy of chronic catarrhal gingivitis in children using locally immune therapy and the immunocorrector “Imudon”. In three months laboratory methods of investigation were performed, i.e. microbiological study of the gingival crevice and oral fluid content, and the investigation of plasma immunological indicators in children with chronic catarrhal gingivitis after the performing of locally immune therapy and the immunocorrector “Imudon” respectively.

The normality conditions of the data investigated and the dispersion test of signs distribution in the compared groups were assessed using Shapiro-Wilks Test. The value equal 0.05 was decided to become a statistical significance threshold.

Physical investigation of children was carried out according to the specially developed schedule and the data obtained were listed in the medical history. The dependence of the gingivitis incidence and severity on the oral hygiene status, and the role of the calculus as a factor contributing to etiology of the disease investigated were proved. PMA index was used to diagnose gingivitis, the oral hygiene status was evaluated using Green-Vermillion index (Figure 1). 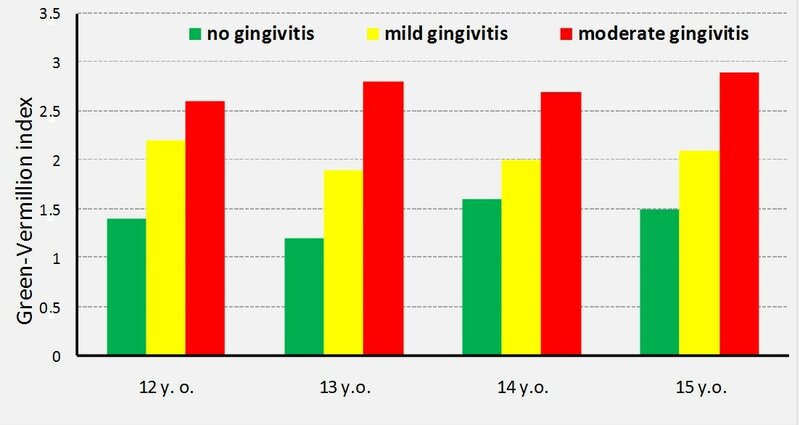 As it is shown on the Figure 1, in chronic mild catarrhal gingivitis the oral hygiene has always been evaluated as unsatisfactory (Green-Vermillion index: 1.9–2.2), in moderate chronic catarrhal gingivitis – as unsatisfactory and bad (Green-Vermillion index: 2.5–2.9). The obtained data of the physical examination of the patients show that to increase the effectiveness of the professional oral hygiene as a preventive method against inflammatory periodontal diseases is necessary to control oral hygiene and periodontal tissue status every 3–4 months and to perform preventive measures in the amount essential to each patient. To evaluate local immunity in children with chronic catarrhal gingivitis single radial immunodiffusion assay, or Mancini method, was applied. Fasting blood sampling was done in the morning. Blood plasma IgA, IgG, IgM immunoglobulins were tested by Mancini method in children of both groups – the main and control. This investigation was performed twice: before and after the preventive and curative interventions. Findings of children with chronic catarrhal gingivitis were abnormal with increased blood plasma immunoglobulin level. The highest findings were observed in children with moderate gingivitis comparing to children with mild gingivitis (Table 2). Findings of the children in the control group were similar to those in the main group. Blood plasma IgA, IgG, IgM immunoglobulins test was repeated three months after the beginning of “Imudon” therapy in patients of the main group and in children of the control group receiving conventional treatment. 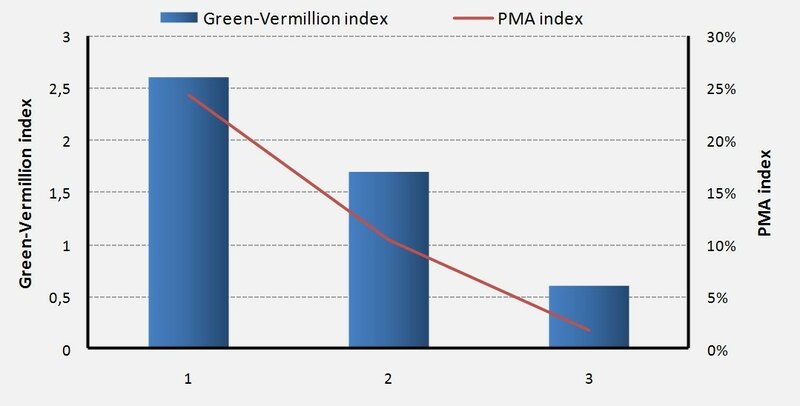 Figure 2. PMA index and Green-Vermillion index average findings depending on the therapy stage.

Children of the control group receiving conventional therapy are noted to also manifest improved immunoglobulin findings slightly. After the application of the locally immune therapy in adolescents with chronic catarrhal gingivitis, both – oral hygiene status and inflammation intensity improved (Figure 2).

Changes in the average β-hemolytic Streptococci colonies amount and the amount of their detection in both – oral and gingival crevicular fluids, depends directly on the oral hygiene status; in other words, improvements of the oral hygiene status lead to decrease in the average amount of β-hemolytic streptococci colonies amount in oral and gingival crevicular fluids.

Consequently, possible β-hemolytic Streptococci implication in the dental plaque development is proved. Quantitative Neisseria and Candida albicans microbiological findings in the oral and gingival crevicular fluids were also reported to change. The above-mentioned findings decreased significantly after the locally immune therapy and professional oral hygiene, as well as the oral hygiene status correction, in children of the control group. In such a way, the average amount of Neisseria colonies decreased 13.6 times in the oral fluid, 32 times – in the gingival crevicular fluid. The decrease of Neisseria and Candida albicans colonies amount appears to reduce the gingival inflammation intensity in children with mild or moderate chronic catarrhal gingivitis.

As can be seen from the above, after the professional oral hygiene and oral hygiene status correction the improvements of oral status and decrease in inflammation intensity led to changes in microbiological findings of the microorganisms under investigation in the adolescents with chronic catarrhal gingivitis. Body changes in adolescents suffering from the periodontal diseases give evidence of the natural protective mechanisms reduction. Due to this, the treatment must be targeted not only at the elimination of inflammation process but at the immunity improvements as well. Then the application of immunocorrectors would be reasonable. These medications are regarded to activate oral mucosa defense providing the increase amount of a special enzyme presenting in the saliva – lysozyme that is known to be microbicidically active, stimulating and increasing the number of immunocompetitive cells responsible for antibodies production. “Imudon” is considered to be such an immunocorrector. “Imudon” application causes the recovery of the resident microfloras found in the oral cavity and anti-inflammatory effect. “Imudon” administration leads to the decrease amount of pathogenic microorganisms on the periodontal mucosa. Being dissolved in the oral cavity these tablets activate the body natural immune defense. Due to excipients active components affect the oral mucosa for a long period. Considering all the above mentioned we can conclude that application of  “Imudon” as a locally immune therapy component gives positive effect in complex treatment of the chronic catarrhal gingivitis in adolescents.

The incidence of chronic catarrhal gingivitis in children aged 12-15 years is still rather high and constitutes 76.3–86.9%.

There was established the correspondence between blood plasma immunological indication changes in children with chronic catarrhal gingivitis receiving “Imudon” therapy before and after treatment.