romj-2017-0301.pdf
Abstract:
In the last years, there is an increase in the number of complex surgical procedures on the spleen. This process couldn’t have gone unnoticed and eventually caused a growth of interest toward this abdominal cavity organ. Acessory spleen represents one of the crucial anatomical variations of the spleen and has major clinical significance. During the anatomical dissection of 35 organ complexes, we encountered 3 cases of accessory spleen, which represents 8.6% of the total number of cases. In this article, we present the three accessory spleen cases with a review of their clinical significance.
Keywords:
accessory spleen, blood supply, venous drainage, anatomical variations, anatomical dissection
Cite as:
Mazuruc N, Covantev S, Belic O. Accessory spleen – a report of anatomical cases. Russian Open Medical Journal 2017; 6: e0301.

In the previous years, there is an increase in the number of complex surgical procedures on the spleen. This process couldn’t have gone unnoticed and eventually caused a growth of interest toward this abdominal cavity organ. Equally important results can be seen in the research that demonstrates the fundamental role of the spleen in the maintenance of the immune system [1, 2].

Nowadays, the interest toward the phenomenon of accessory spleen (AS) increased significantly. This can be largely explained by the clinical significance of the spleen in the daily medical practice, during surgical and diagnostic procedures.

During the anatomical dissection of 35 organ complexes, we encountered 3 cases of AS, which represents 8.6% of the total number of cases. The organ complexes from patients whose death was not related to splenic pathology were dissected at the department of human anatomy of the State University of Medicine and Pharmacy “Nicolae Testemițanu” (Chisinau, Republic of Moldova).

In the first case an AS was detected in the hilum region, at the lower part of kidney surface of the parent spleen, and it had following dimensions: 0.8*0.7 cm, while the size of the main organ was 7.0*9.7 cm (internal organs complex of 53 years old female) (Figure 1). The blood supply of the spleen was by an independent vessel, extending from the superior splenic artery of the I order. An independent vein from the superior part of the AS vessel was draining into the upper vein of the II order.

In the second case, an AS was detected during the anatomical dissection of the internal organs of a 46 years old male. It was located in the hilum region, closer to the center of the visceral surfaces and had a rounded shape (0.7 cm diameter), the main organ parameters were 12.0*7.0 cm (Figure 2). The artery of the AS branched from the splenic artery of the II order. The vein of AS drained into the upper vein of the II order. 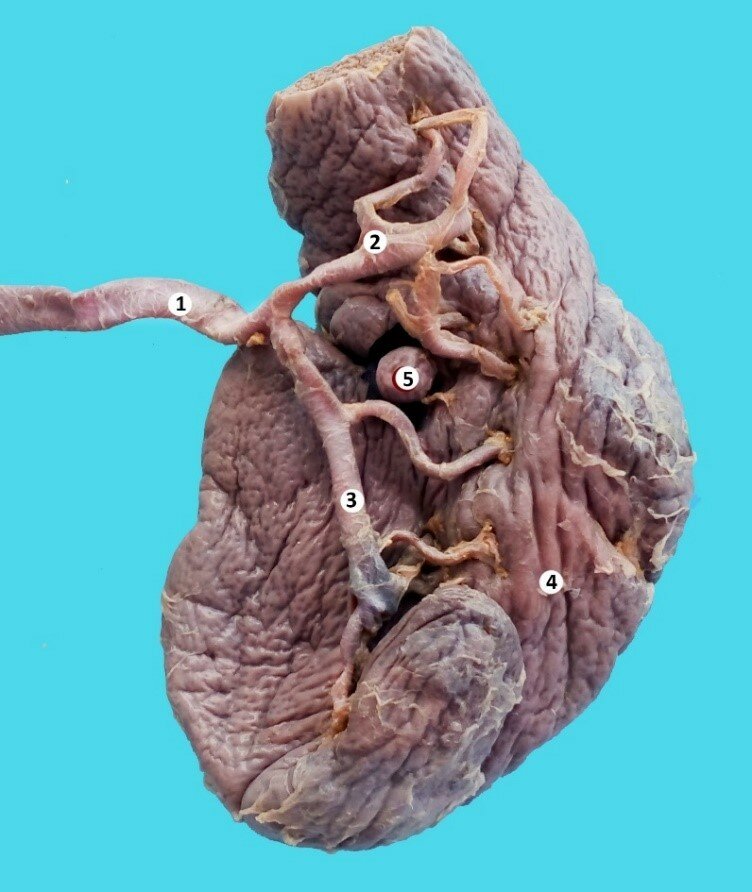 In the third case, we had an AS on a long vascular pedicle, whose size was 2.5*2.0 cm (organ complexes of a woman, 60 years old). It was located between the sheets of gastro-duodenal ligament; partially adjoin to the stomach surface of the parent spleen, closer to the front end. The dimensions of the main organ were 8.5*6.0 cm (Figure 3). The blood supply to the spleen was from the inferior splenic artery of the I order. Two veins came out of the AS and drained into the inferior vein of the I order.

General information on all three cases is shown in Table 1. 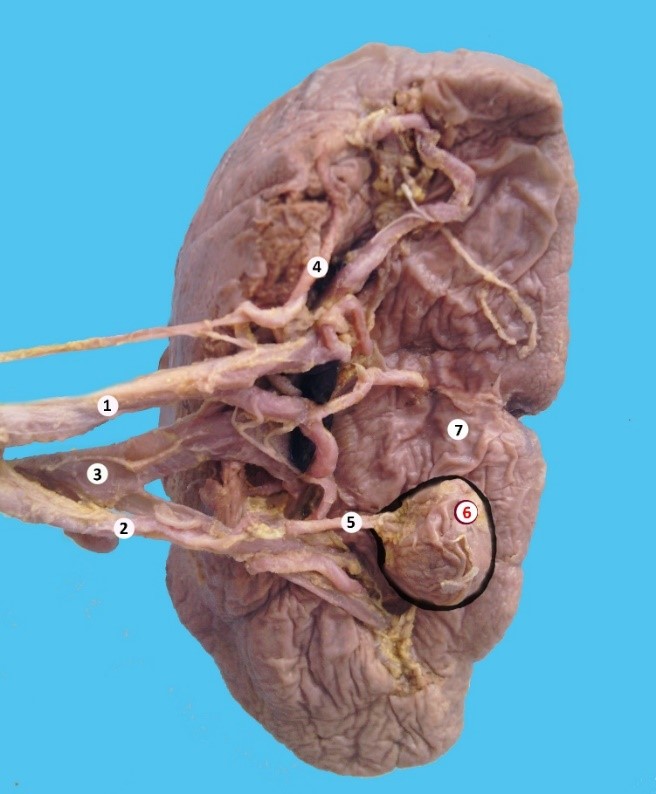 Table 1. Summary of data on AS cases

Nowadays, the interest toward the phenomenon of AS increased significantly which can be explained due to its role in the daily medical practice. AS can be encountered on CT in 11.0-18.8% of cases [3, 4]. In up to 40% of these cases, the patient has two or more (up to four) AS [4].

AS appearance often resembles the parent organ. In most cases, they are connected by a pedicle vessel of different length with the main vessels of the spleen. Through this cord the blood supply is carried out, which can be from the splenic artery, and from the other sources.

AS may look like a tumor of the tail of the pancreas in case of an intraorganic location [5]. The literature also describes cases, where AS was mistaken for other abdominal tumors or cysts [6, 7]. Emergency surgery may be required during the twisting of the pedicle of the AS and, according to the literature, it is more common in children [8]. There are also case descriptions of AS ruptures due to trauma.

According to the literature, AS are often located in the splenic hilum, but there are also rare cases when it may be located in the pelvic cavity. Such cases may be asymptomatic or mimic the symptoms of gynecological diseases [9].

In the case of splenectomy due to hematological diseases (non-Hodgkin lymphoma, idiopathic thrombocytopenia and other), the remaining AS may undergo hypertrophy, which would require surgery in the future. In some cases, the hypertrophy may be a long process, which is even a more complicated diagnostic case, as in the case of a patient with idiopathic thrombocytopenia, which appeared 19 years after the original splenectomy [10].

AS was encountered in 8.6% of the total number of specimens that we studied. It is most often located in the hilum or on the visceral surface of the spleen. AS blood supply is provided by the branches of the splenic artery and venous drainage – by one or two veins. Thus, knowledge of the variation of development of the abdominal organs and particularly of the spleen is important in clinical practice for surgical and diagnostic procedures.