Neurosarcoidosis is one of the manifestations of systemic sarcoidosis, which is a progressive nervous system impairment [1]. Occurrence of neurosarcoidosisis 8-10 cases per 100,000 people according to the data given by the modern researchers [2].

Incidence varies in different countries from 4 to 47 casesper 100,000 people [3-8]. The research surveys show a positive dynamics of neurosarcoidosis incidence [1]. Neurosarcoidosis distributes among people of all age groupsbut people at the age of 34-40 are mostly prone to the disease [3-5].

The clinical symptoms of the nervous system involvementare detected in 5-10% of patients with sarcoidosis [2]. As a rule, neurosarcoidosis develops among patients with confirmed clinical diagnosis of sarcoidosis. The neurological disorders can be the primary manifestation in less than half of the cases, and in 10% of the cases they areonly sign of the disease without any other organs involvement [2]. Nowadays the statistics on incidence of neurosarcoidosisis not carried out in Russia.

The purpose of the study is to identify typical and specific features of neurosarcoidosisby analyzing the clinical case.

In January 2016, a 26-year-old the patient M was admitted to neurological ward with complaints of recurrent headaches, localized mainly in the temporal-parietal region, numbness and weakness in his left hand, speech disorders.

In 2012 patient M was diagnosed with pulmonary sarcoidosis and intrathoracic lymphatic nodes, in active stage. The patient was treated with prednisolone and omeprazole under the supervision of pulmonologist. At the admission time, the neurological status was characterized by the asymmetry of nasolabial folds, mild hypoesthesia in the left hand. The patient had speech disorders. Аrterial hypertension was revealed. According to the magnetic resonance imaging (MRI) of the brain, there were magnetic resonance (MR) images of ischemic cerebrovascular accidents of the right parietal lobe in the right middle cerebral artery (MCA), MR-picture: cystic glial changes in the left parietal lobe, signs ofemerging lacunar postischemic cysts of the right hemisphere of the cerebellum (Figure 1A). The same year, he was treated for acute ischemic stroke in Kursk regional hospital with the diagnosis of transient ischemic attack in the right MCA. To exclude specific brain injury thepatient was transferred to the neurological department of the Kursk regional hospital where the diagnosis of neurosarcoidosis with granulomatous lesions of the brain substance with left-sided pyramidal symptoms was redefined. After successful treatment with antioxidants, glucocorticosteroids, neuroprotective and vasoactive drugs patient was discharged with improvement. 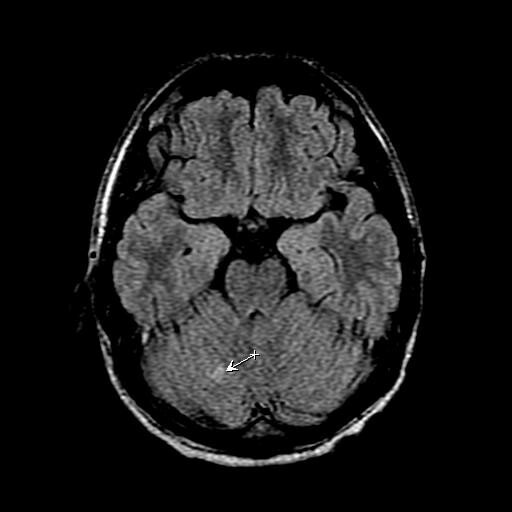 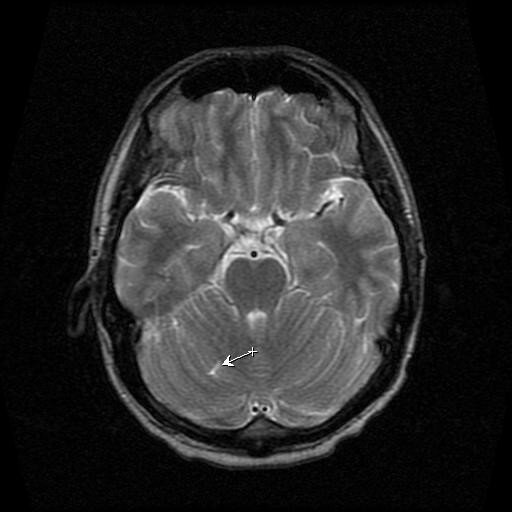 B
Figure 1. The MRI of the brain (neurosarcoidosis) on primary (A) and secondary (B) hospitalization.

The neurological status of the patient included nasolabial folds, mild hyperesthesia in the left arm, during the hospitalization. The patient complained of sleep disturbance, problems with eating regimeand reduced training activity in comparison with the previous period. The patient underwent MRI (MR spectroscopy) of the brain, rheoencephalography, electrocardiography, and neuropsychological investigation of higher mental functions.

Electrocardiography examination revealed disorders of the repolarization process. MRI of the brain showed the areas of increased intensity in T2-weighed brain MR images, the hyperintensive and hypointensitve areas in T1-weighed images of the brain in the right hemisphere of the cerebellum and cerebral hemispheres. The obtained data correspond to the positive dynamics of the centers of the right hemisphere of the cerebellum and cortex.

We carried out a series of control T1, T2-weighed images of the sub and supratentorial brain structures in the sagittal and axial projections (Figure 1B).

One of the data obtained by methods of functional diagnostics of the patient has been diagnosed with neurosarcoidosis with granulomatous lesions of the brain substance with left-sided pyramidal symptoms-based.

To study the functional features of the higher mental functions of the patient with neurosarcoidosis neuropsychological diagnostics has been carried out.

Examination of praxis functions (kinetic, kinesthetic, dynamic, and spatial) has revealed disturbances of pace and accuracy in performance of the movements and actions.

Functional neuropsychological tests were carried out with minor errors (slow performance, inaccurate performance with self-correction). When performing movements of a non-dominant (left) hand, the patient made significant errors in accuracy. The patient found it difficult to repeat the movement, he couldn’t correct these errors. The reduced movements rate and absence of accuracy was revealed in the process of reproduction (of poses according to the given pattern). In norm, the patient reproduced the necessary poses on a tactile pattern after the pause of 8-10 seconds determining the desired posture by selection method.

The study of dynamic praxis with the use of the "Fence" test has revealed major axis shift in the direction from top to bottom, jitter of the line during the tasks performance with both left and right hands. Micrographyhas been observed while performing the task with the right hand and it indicated the signs of exhaustion.

Reciprocal coordination probe has revealed reduced pace and accuracy confirmed by «blurring» movements and slower fulfillment of the tasks, compared with the same activity according to the given pattern during the test performance. Performing the functional "first-edge-palm" test the patient fulfilled three repeated actions correctly and then he skipped the middle link ("edge") during the fourth and fifth repetitions regardless of the task performance with the right or the left hand (the impairments have been expressed more intensively). It indicated symptomatic of the motor act program and exhaustion as well. The use of the Head probe which is a simple variant of the sensitized variant with double conversion hasn’t revealed any impairments of the spatial praxis. The impairments in accuracy and the pace of the tasks fulfillment by the leading and non-dominant hand have not been revealed.

The study of gnostic functions (color gnosis, visual gnosis) conducted with the use of functional test (recognition of the realistic, overlapping and crossed images) have not revealed any impairments of the function. The study of spatial gnosis which was carried out with the use of functional tests supposing recognition of mirror images of the letters has revealed insignificant decrease of the rate and accuracy of the letter recognition. The study of the tactile gnosis has revealed insignificant decrease in the accuracy of touch on the right hand and impossibility of the touch on the left hand. The study of the differential sensitivity on the back of the hand, fingers and forearm with Weber’s compass determined touch discrimination of 15 mm on the left arm. On the hand and forearm of the right hand, it is 10 mm and on the fingers of the right hand, it is 5 mm. Preservation of innervation on the left hand of up to 1.5 seconds caused by previous touch was revealed.

Impairment of optical spatial representations was detected. While performing functional tests "Blind watch" the patient made mistakes in marking the specified time on the circle, as well as in recognizing time on the pictured dial with arrows and without numbers.

The study of attention stability and concentration using Schulte tables revealed no disturbances (running time is 47 s – 42 s – 43 s). There are no violations in the study of counting operation. The study of short-term auditory-verbal memory span by using the method "10 words" without interference revealed the decline; remembering curve is as follows: 6-7-7-8 words. In the study by interfering influence, the capacity of short-term auditory-verbal memory was 5 words, indicating reduction of the memory consolidation process. In the study of mental operation stifling errors were identified, emphasizing the decrease in the accuracy of the generalization and comparison processes. There is also the decrease in the level of general knowledge.

The result of neuropsychological assessment revealed impairments of the kinetic and kinesthetic organization of movements (as verified by the reduction in the pace and accuracy of appropriate neuropsychological functional tests); disturbances of the spatial organization of movements and actions, as well as optical spatial gnostic functions. There are disturbances of differential sensitivity. The obtained results may indicate functional disorders of the programming block, regulation and control (prefrontal cortex), as confirmed by disorders of dynamic praxis, as well as by disturbances of anticipative-prognostic functions. Distortions of the optical-spatial representations and spatial organization of movements and actions (praxis) allow us to conclude that there are functional disorders of the posterior parieto-temporo-occipital associative areas of the cerebral cortex with predominate shift to inferior parietal lobe of the right hemisphere.

At present the queries on the clinical cases of sarcoid vasculitis in the Web of Science system have been obtained five. Three out of five cases describe the child's sarcoid vasculitis as a secondary manifestation of the disease [9-11]. The description of the clinical case of a 38-year-old patient with extensive infarction in the brainstem and thalamus, presumably as a result of sarcoid vasculitis, is described as a persistent vegetative state he did not recover from [12]. When the authors conclude that MRI and cerebrospinal fluid (CSF) studies are sensitive to the detection of central nervous system inflammation, but have no specificity, which makes the establishment of neurosarcoidosis a clinical problem. The clinical case does not contain a neurocognitive evaluation of the patient's status. The clinical case of a 41-year-old African American man who was diagnosed with neurosarcoidosis and the symptoms of hypothermia of the center of incontinence, lack of balance and cases of loss of consciousness, contains a medicamentous treatment regime and does not have a description of the neurocognitive status.

Our case’s clinical presentation is unique because of the fact that neuropsychological manifestations of  neurosarcoidosis have been described at the level of different functional systems (praxis, cognitive, mnestic and regulative functions). On the one hand, the detailed results of the neurological examination (quantitative and qualitative assessment of the manifestations of the disease) are not represented at functional level, because studies explore the neuropsychological manifestations of neurosarcoidosis. On the other hand, studies include the evaluation of either cognitive [4, 5], or memory functions [3] in terms of their reduction, but do not include analysis of other functional systems (praxis, regulatory functions).

In the current clinical case specific manifestations of neurosarcoidosis with predominant localization of granulomas in the cortex of the right parietal lobe and cerebellum demonstrate themselves by the reduction in pace and accuracy of movements and spatial organization of motor functions. At the neurofunctional level of neurosarcoidosis manifestations, there are violations of general motor activity (in the form of peripheral neuropathy and myopathy), the functions of fine motor skills are usually not affected. Atypical manifestations of neurosarcoidosis with small-focal right-handed localization of granulomas are violations of prognostic functions and the reduced consolidation of memory process, related to the morphological base indirectly and possessing high compensatory resource, due to the localization of lesions in the subdominant (right) hemisphere.