romj-2021-0206.pdf
Abstract:
An empty sella (ES), also known as an empty sella turcica (empty pituitary fossa) is defined as an intrasellar herniation of subarachnoid space within the sella which leads to flattening of the pituitary gland towards the posteroinferior wall. Purpose — to analyze studies of ES prevalence in the world. Methods — We carried out a systematic search in both Russian and English databases (E-library, PubMed, GoogleScholar, OxfordPress, ClinicalKeys) using keywords “empty sella”, “empty sella turcica”, “empty pituitary fossa”, “prevalence” and their combinations. The period of search: 2000-2020. It is also worth noting that earlier publications of historical interest were included in the review. Results — We have analyzed 23 studies. They can be roughly devided into two groups: the first group – screening studies of ES, the second group – targeted studies of ES.
Keywords:
empty sella, empty sella turcica, empty pituitary fossa, prevalence, frequency
Cite as:
Sharavii VB, Shnayder NA, Sharavii LK, Petrova MM, Nasyrova RF. Empty sella prevalence: step by step. Russian Open Medical Journal 2021; 10: e0206.

An empty sella (ES), also known as an empty sella turcica (empty pituitary fossa) is defined as an intrasellar herniation of subarachnoid space within the sella which leads to flattening of the pituitary gland towards the posteroinferior wall [1, 2]. 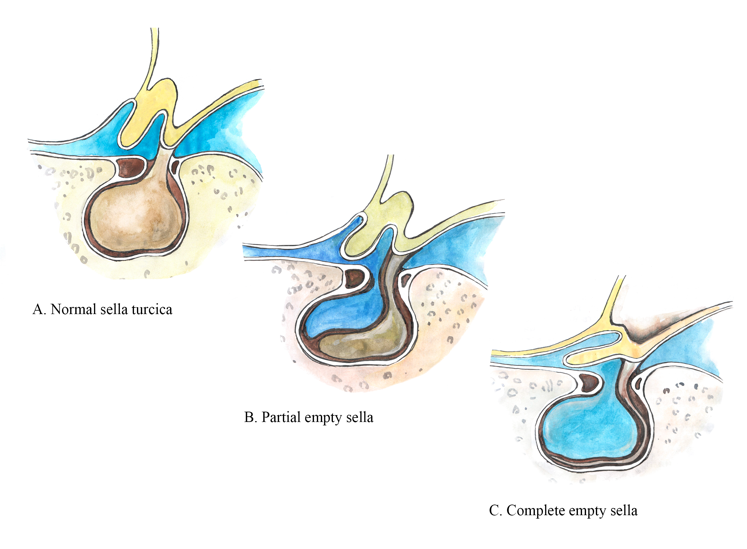 Depending on its etiology, ES can be also classified as primary and secondary. In the case of primary ES (PES), the etiology of the pituitary gland atrophy is not clear. Several etiopathogenetic hypotheses have been proposed. Congenital anomalies in incomplete formation of the diaphragm of ST are being discussed as a possible mechanism [4]. Secondary ES (SES) may be caused by pituitary adenomas undergoing spontaneous necrosis (ischemia or hemorrhage), radiotherapy, drugs, previous surgery, infective, autoimmune, and traumatic causes [5, 6].

There is still some debate over whether who first introduced the term ‘empty sella’, W. Bush or H. L. Sheehan and V. K. Summers. Both of them used this term in the 1950s (1951 and 1949, respectively) while describing pituitary necrosis in postpartum women. Particularly W. Busch, in 1951, performed a large study of 788 human cadavers during autopsy examination of the sella turcica and observed in 40 of 788, predominantly women, a sella turcica with an incomplete diaphragma sellae, where the pituitary gland was not absent but flattened in a way that it formed a thin layer of tissue in the periphery [7-12].

The next era of research into this phenomenon started in 1957 when new methods of diagnosis were introduced. Therefore, due to the advent of X-RAY and craniography, in 1957 G. Robertson showed intrasellar air on pneumoencephalograms, and in 1958 E. P. Engels demonstrated the presence of pituitary gland during cervical myelography with ethyl iodophenylundecylate [9].

Over the years, the term was increasingly recognized by radiologists observing a similar phenomenon in computed tomograms (CTs) and magnetic resonance imaging scans (MRIs) of the brain in day-to-day practice [3, 8, 13]. With an ever-increasing number of patients undergoing CT and MRI, the reported prevalence of ES is set to rise proportionately [1]. Nowadays, ES is mostly considered as a common but incidental finding in brain imaging owing to the fact that SES is rare and there are no proper clinical presentations associated with this condition [5]. Coronal scans of MRI are reported to be more sensitive than computed tomography (CT) for the diagnosis of ES [3], as it provides more soft tissue details [14].

Therefore, the prevalence of ES has strongly correlated with the advent and improvement of new methods of brain imaging (Figure 2) and the implementation of these diagnosis methods into routine clinical practice. 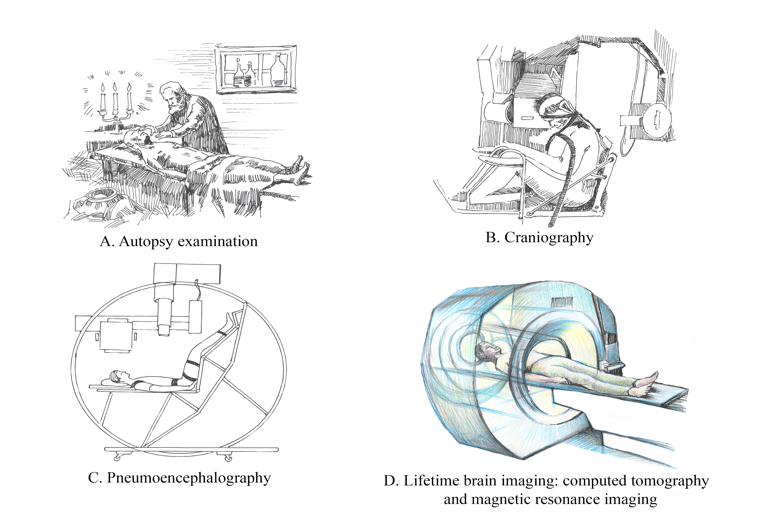 We carried out a systematic search in both Russian and English databases (E-library, PubMed, GoogleScholar, OxfordPress, ClinicalKeys) using keywords ‘empty sella’, ‘empty sella turcica’, ‘empty pituitary fossa’, ‘prevalence’ and their combinations. The period of search: 2000 – 2020. It is also worth noting that earlier publications of historical interest were included in the review.

By design, the studies can be roughly divided into two groups. The first group consisted of screening studies (Table 1) that examined the incidence of ES among all patients who underwent brain imaging without regard for the presence of clinical manifestations of ES. The second group incorporated targeted studies (Table 2) that included patients with clinical manifestations characteristic of ES.

Colao A. et al. (2013) performed a retrospective study held in three Italian tertiary health care centers. PES was found in 94 patients out of the cohort of 1484 individuals (6.33%), with 39 male and 55 female patients with mean age 50.2±0.9 years, which proves once again a higher prevalence of ES in the female population [15].

The prevalence of ES in India was investigated in the large retrospective study including a total of 12414 patients who underwent MRI of the brain for various indications reported by Debnath C.J. et al. (2016) [1]. The study period was ranging from 01 April 2006 to 31 March 2015. ES was found in 241 (1.94%) patients;
110 (45.6%) patients both male and female were 30-50 years old. Males (57.7%) were predominant in the list of patients with ES despite the fact that in the world literature there is a four-fold female predominance.

In the retrospective study conducted by Nwafor N.N. et al. (2019) over a period of three years between May 2016 and 2019 at a private radiodiagnostic center in Nigeria, the prevalence of ES was investigated. However, the authors did not mention the total number of cases that were included in the study and the total number of patients with the presumptive diagnosis of ES. Nevertheless, it is worth mentioning that a total of 8 females between the ages of 34 and 56 years who presented with various chronic clinical symptoms had an imaging finding of ES on MRI [5].

Ekhzaimy A.A. et al. (2020) carried out a ten-year retrospective analysis of PES cases in the period 2007 to 2017, from a single tertiary care referral hospital in Saudi Arabia. According to their results, 765 out of 26218 patients (2.92%) who underwent MRI in this period were diagnosed to have PES. Among these, PES preponderance was noted with 607 females and 158 males with a male:female ratio of 1:3.8 suggesting female predominance by almost four times. However, a peak increase in both male and female patients was documented in the age group older than 50 years. It is interesting to note that 79% of the cases were diagnosed as incidental findings and only 20% were seen by endocrinologists due to the presence of clinical presentation [18].

Auer M.K. et al (2018) [3] identified 2523 publications by using the search term ‘empty sella’; 1282 of these were published between 1995 and 2016. Applying further exclusion criteria yielded 120 remaining studies of PES. Only four of these studies dealt with PES as an incidental finding and had used appropriate endocrinological and radiological diagnostic evaluation methods. According to current data from India, ES without any detectable cause is an incidental finding in about 2% of all brain MRI scans. The prevalence of PES, i.e. ES without any discernible cause, is not precisely known; estimates range from 2% to 20%

Although the etiology of IIH is still unclear, it can be associated with ES in some cases. We found three targeted studies of ES prevalence in patients with IIH without hormonal disturbances [2, 22, 23]. Prevalence of ES varied from 2.5% [22] to 14% [2].

Moreover, several IIH associated with ES can be quite high. Therefore, it can become an indication for neurosurgical treatment.

Furthermore, we found one targeted study in which authors showed an association between ES and increased intracranial pressure in patients with traumatic brain injury [24].

Thus, in 1983 Gharib H. [25] performed a study that involved 11 women with concurrent IHPE and PES. All patients underwent radiological investigations including sellar polytomography, CT of the brain, bilateral carotid angiography, and pneumoencephalography. Moreover, histological and immunological studies of the pituitary gland were performed in some of the patients, and no abnormalities were found [25].

The cause of IHPE associated with ES is still unknown. However, it could be accompanied by galactorrhea and amenorrhea, which is clinically important for women of childbearing age and adolescents of both genders.

In subsequent years, concern for this phenomenon has not waned. Due to the practical application of brain MRI into clinical practice, the hypothesis that IHPE can be an endocrinological abnormality in the population of patients with ES was confirmed.

In addition, in most cases, IHPE is often not accompanied by histological changes of the pituitary gland itself. Thus, we found 3 case-studies that described this phenomenon. Twin and Brophy (2012) described a 46-year-old female patient with isolated galactorrhea and elevated prolactin level in the blood. Viral and inflammatory brain diseases were excluded and a brain MRI was performed. IHPE was associated with ES [26]. Although the association of macroprolactinemia and ES is rare, Ach Taieb et al. (2017) reported a case of a 47-year-old female patient with bilateral galactorrhea and spaniomenorrhea since the age of 37 years. Brain MRI showed ES. Therefore, according to the authors, isolated macroprolactinemia can be in strong association with ES [27]. Moreover, Blevins Jr. L. (2018) described a case of a female patient with the evaluation of ES and IHPE. She had a prolactinoma due to which SES developed [28].

Overall, despite its clinical significance, the number of targeted studies is small. We found two targeted studies, according to which prevalence of ES with IHPE varied from 2.5% [29] to 20.8% [30].

ES and symptomatic hormonal disturbances. The greatest number of targeted studies of ES involved patients with symptomatic hormonal disturbances including hyperpituitarism, hypopituitarism, hyperprolactinemia, hypothyroidism, gonadotropin, GH, and adrenal deficiency. In most studies patients were referred to do brain MRI in endocrinology clinics. Patients with ES had variable clinical conditions ranging from mild endocrine disturbances to severe intracranial hypertension and rhinorrhea.

Our systematic analysis of screening and targeted studies of pathological conditions associated with empty sella syndrome indicates that the increase in the prevalence of PES in the population is due to the introduction of new methods of lifetime brain imaging.

According to the results of screening studies of ES, the mean prevalence of PES in the population was 7.56%.

Meanwhile, according to the results of targeted studies of ES, the prevalence of PES with clinical manifestations vary depending on associated pathological conditions: IIH – from 2.5% to 60%, IHPE - from 2.5% to 71%, symptomatic hormonal disturbances – up to 100%. Moreover, we found several studies of PES prevalence in patients with Cushing’s disease – 16.1% [38], with autoimmune abnormalities of the pituitary gland - 84% [39], with Sheehan syndrome [40]. It is worth noting that we found studies of PES associated with rare and unusual presentations such as sinus bradycardia, refractory hypoglycemia, and seizures [41, 42].

Therefore, both asymptomatic and symptomatic cases of PES need particular attention from neurologists, endocrinologists, and radiologists. A finding of PES using brain imaging performed for various reasons such as headaches, dizziness, oligomenorrhea, galactorrhea, CFS rhinorrhea, visual abnormalities, neurological symptoms require a multidisciplinary approach for early detection of pathological conditions associated with PES because in some cases conservative treatment is not efficient enough. On this account, neurosurgical treatment has to be performed [23].

ES, especially PES, is one of the topical problems of modern neuroendocrinology. Implementation of new methods of lifetime brain imaging, such as CT and functional MRI, into day-to-day practice, broaden the understanding of this underinvestigated disease.

It should be acknowledged that the real prevalence of ES, including PES and SES, is significantly higher than previously thought. Due to the fact that currently published studies of ES predominantly include a small number of patients, our systematic analysis shows that large multicenter screening and targeted studies of PES and SES are required to be conducted in various racial and ethnic groups of patients and in association with various clinical conditions. Different designs of studies and sampling variability by race, ethnicity, and gender of patients are a significant limitation for systematic analysis and make it more challenging to conduct.

We declare that we have no conflict of interest.

We acknowledge Baylak Borbakovich Sharavii who has contributed to the study by preparing all pictures in the article.