Influence of chronic intrauterine hypoxia on development of testicles of newborns

According to the literature, 4.0–4.5 million couples (10–17%) are infertile in Russian Federation, and in half of cases it is associated with a violation of reproductive health of men. The etiology of male infertility is diverse and is classified by WHO into 16 major groups [1]. Significant factors in the occurrence of congenital anomalies, cryptorchidism, and idiopathic infertility are various pathological conditions that develop during pregnancy and affect fetal gonadogenesis.

The most common cause of pathological conditions of the fetus and newborn is hypoxia, which develops in various diseases of the mother and fetus and adversely affects the development of all organs and systems. Antenatal damage to the reproductive system is important, since the consequences of this damage can be irreversible and lead to a disruption in the function of the testicles in the postnatal period, and further to the development of primary infertility [2, 3].

The effect of chronic hypoxia on the development of the reproductive system under experimental conditions has been studied by various researchers. A decrease in the body weight and weight of the testicles of newborn rats was found in comparison with the control. Histological examination indicated interstitial edema, diminished tubular size, focal dystrophy and atrophy of spermatogenic epithelium, dystrophic changes and impaired functional activity of Leydig cells [4].

In other works it is noted that as a result of various pathological conditions in the testicles, the processes of apoptosis and proliferation are violated, which play an important role in the processes of normal development and homeostasis. In the testes, in the embryonic and early postnatal periods, they can determine the final size of the testicles of an adult and the fertility potential [5, 6].

Protein Bax is a pro-apoptotic protein localized in the cytoplasm and acting as a growth inhibitor. It is known that the protein Bax is regulated by the nuclear protein p53. The p53 gene is a stress-dependent protein: in response to deoxyribonucleic acid (DNA) damage, it inhibits the change in the phases of the cell cycle or induces apoptosis.

Data on the expression of proliferation and apoptosis markers in the testicles of newborn rats under the influence of antenatal hypoxia are extremely scarce [5, 6].

The aim of the study was to assess the effect of chronic hypoxia on the development of the reproductive glands of the fetus of rats in experiment.

In experiments, a study of chronic hypoxia effects on the course of pregnancy and the development of testicles in rats was conducted.

The "Experimental (preclinical) study of new pharmacological substances" [8], "Guidelines for laboratory animals and alternative models in biomedical technologies" were based on the development of the experimental research model [9].

Work with laboratory animals was carried out according to the protocol of research in accordance with the Geneva Convention on the International Principles of Biomedical Research using Animals (1985) and the Helsinki Declaration (2000) on humane treatment of animals.

In the work, 10 white outbred female rats aged 4 to 10 months with a weight of 200±30 g were used. Laboratory animals were divided into 2 experimental groups, 5 rats in each. The first (experimental) group underwent hypoxia throughout the entire pregnancy (21 days). Modeling of hypoxia was carried out in accordance with the technique of N.N. Karkischenko (2010). The second (control) group was not exposed to any treatment throughout the entire pregnancy.

The timing of pregnancy began with the discovery of sperm in the vaginal smears of rats. After delivery, adult animals were excised from the experiment by decapitation, newborn babies on the first day of life – by the method of cervical dislocation. The number of rats in the litter was counted and their body weight was measured. The testicles of male rats were conducted for morphological studies.

The testicles of rats were fixed in buffered neutral 10% formalin (pH=7.2, 5 to 24 hours); dehydrated in a battery of alcohols of ascending concentration, poured into paraffin. Sections of testicles 4 to 5 μm thick were placed on objective glasses and dewaxed according to the accepted standard procedure. Sections were stained with hematoxylin and eosin and used for immunohistochemical (IHC) staining.

After dewaxing and rehydration of the paraffin sections, the IHC study was performed according to the immunohistochemical staining protocol. REVEAL-Biotin-Free Polyvalent DAB (Spring Bioscience, USA) was used as a visualization system. The following antibodies were used in the work: monoclonal rabbit anti-Ki67 antibody (Abcam, USA, in dilution 1:100); monoclonal Mouse anti-Bax antibody (Abcam, USA, in dilution 1:50).

Evaluation of immunohistochemical reactions was based on a visual assessment of the intensity of staining and counting the number of immunopositive (positive) cells.

The proliferation and apoptosis index was determined by counting the number of Ki-67 and Bax-positive nuclei per 100 cells of the corresponding structures (gonadocytes, Sertoli cells, Leydig cells) in all groups with an increase of ×774, followed by calculating the percentage.

After checking the sample sets of the investigated values for the Kolmogorov-Smirnov distribution normality, it was revealed that the distribution of the investigated parameters differs from the normal one, that is why the methods of nonparametric statistics with median calculation, interquartile range, the reliability of the difference between groups by the Mann-Whitney criterion. Differences were considered statistically significant at p<0.05.

Data presented as median with lower and upper quartiles – Me (LQ, UQ); in f/v – in field of view.

At microscopic examination of testicles in the first and second groups, the morphological pattern did not differ significantly (Figure 1A). The testicles were covered with a thick connective tissue capsule – a squamous cell membrane. There was no division of testicles into lobules. The convoluted seminiferous tubules were oval and round in shape. The cells in the tubules were located chaotically, the clearance was absent. Among the spermatogenic epithelium represented by the supporting cells and subtypes of germ cells, large rounded cells with a large nucleus and pink cytoplasm - gonocytes attracted attention (Figure 1B). 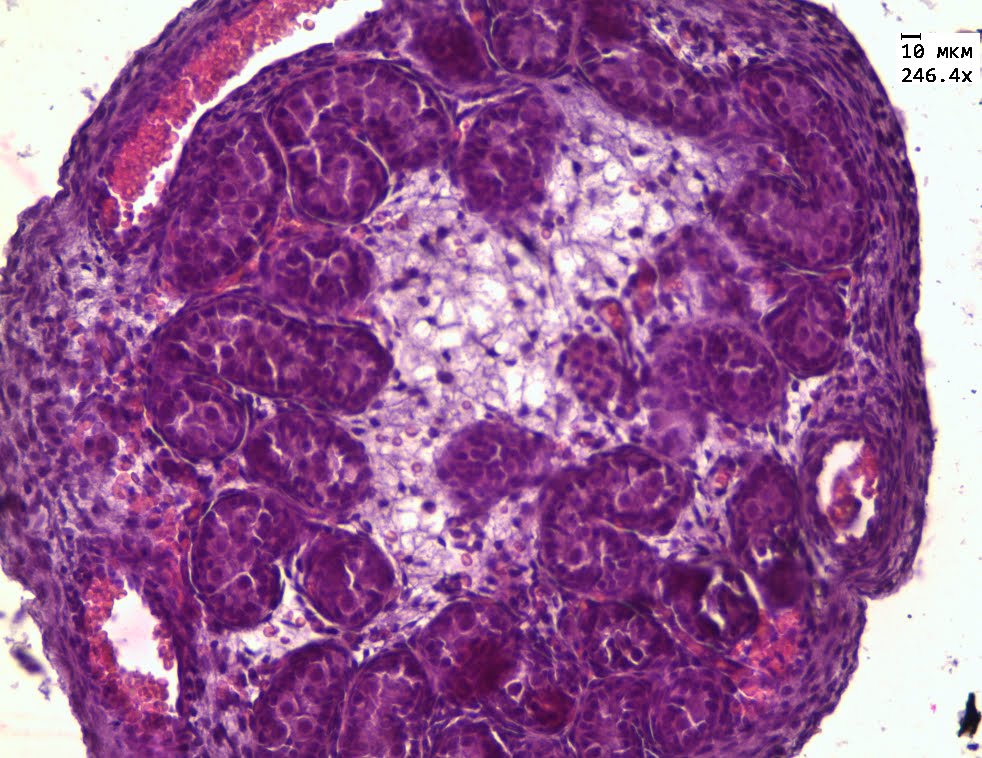 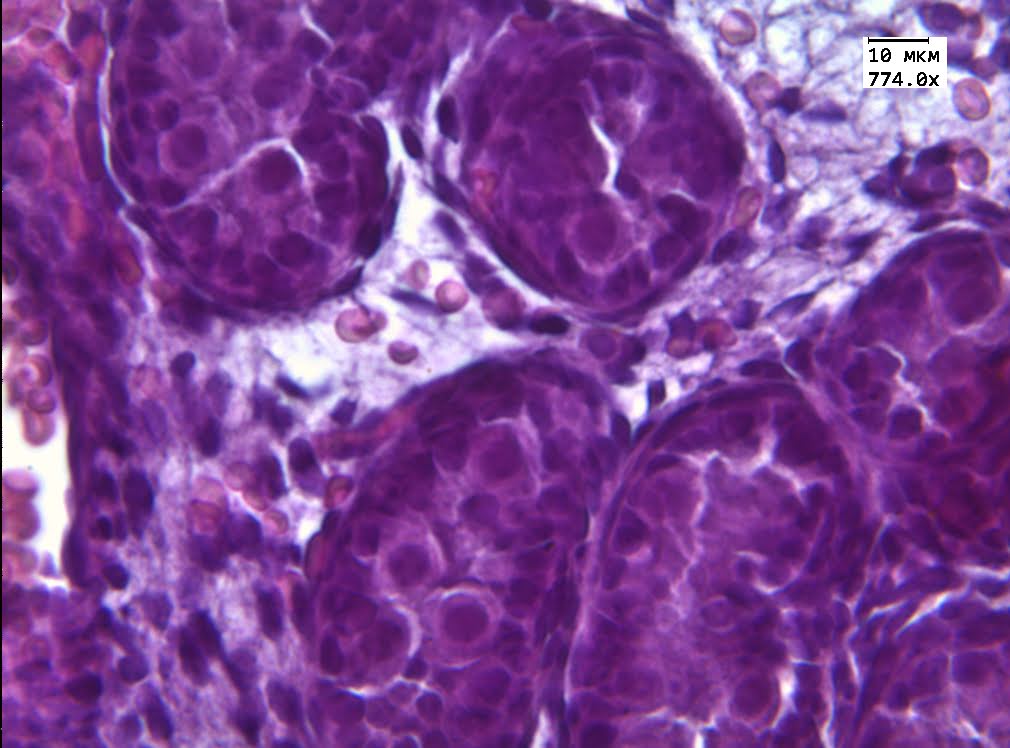 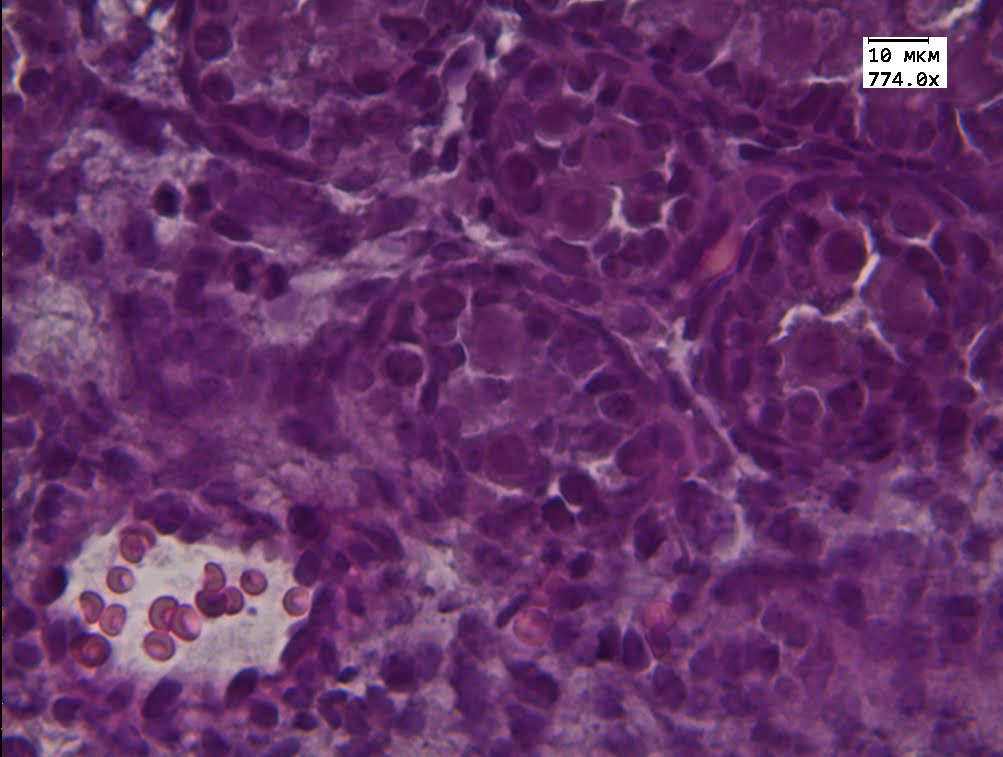 Between the tubules a soft-fibrous connective tissue was located (Figure 1B). In the central parts of the testicle, the severity of the stroma of various degrees was noted due to edema. Some fields of vision were represented only by the stromal component; the tubules were absent (60x).

When analyzing the morphometric parameters (Table 1), it was found that the diameter of the tubules in the experimental group was less (Me=0.0435) than in control group (Me=0.0510). The differences in area of the parenchyma and stroma were also revealed between groups. Thus, the area of the tubules in the first group was less (Me=0.0109) compared with the control group (Me=0.0120). With respect to the stromal component, the inverse relationship was observed (Me=0.0101 and 0.009, respectively).

A decrease in Ki-67 expression and an increase in apoptosis marker expression were noted in the experimental group, but probably due to a small number of observations, these differences are not reliable. It should be noted that, despite the fact that Bax is a cytoplasmic marker of apoptosis, we also observed its nuclear expression in gonocytes, Sertoli cells and Leydig cells. This is consistent with the literature data that the Bax protein can also accumulate within the nucleus shortly after the physiological triggering of apoptosis [7]. 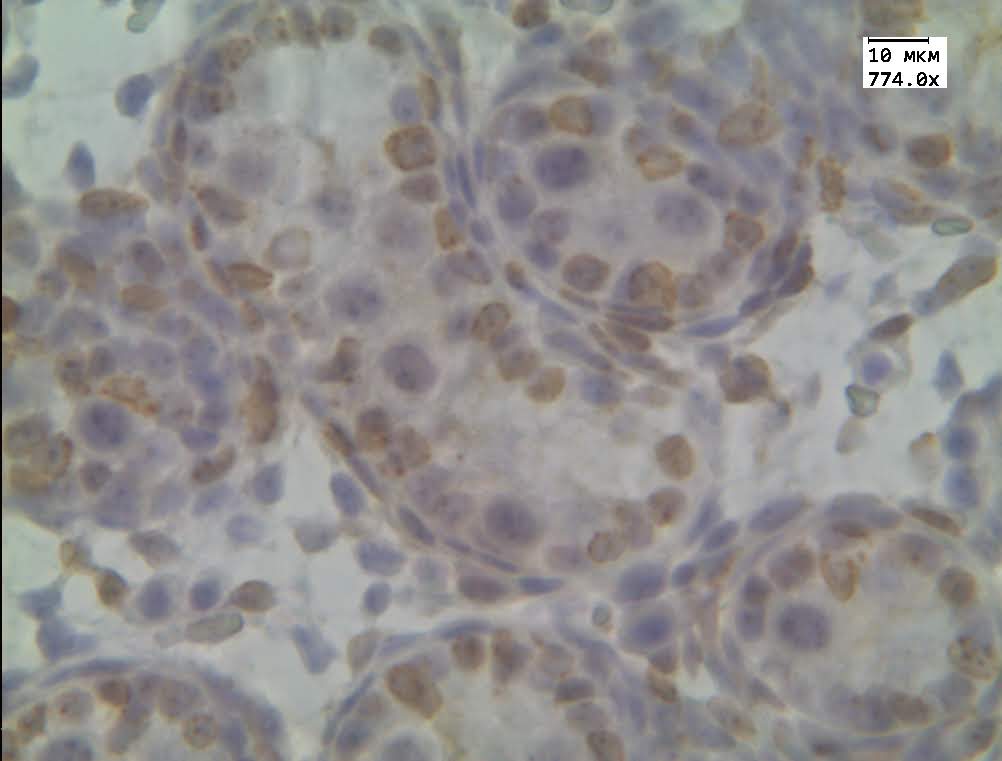 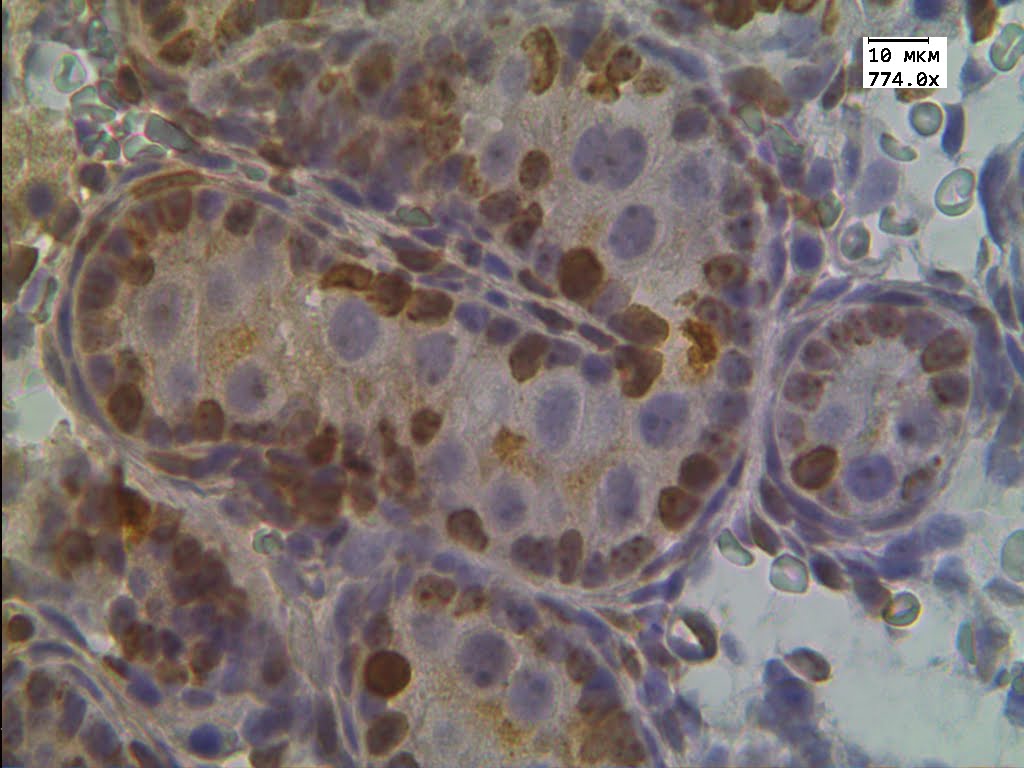 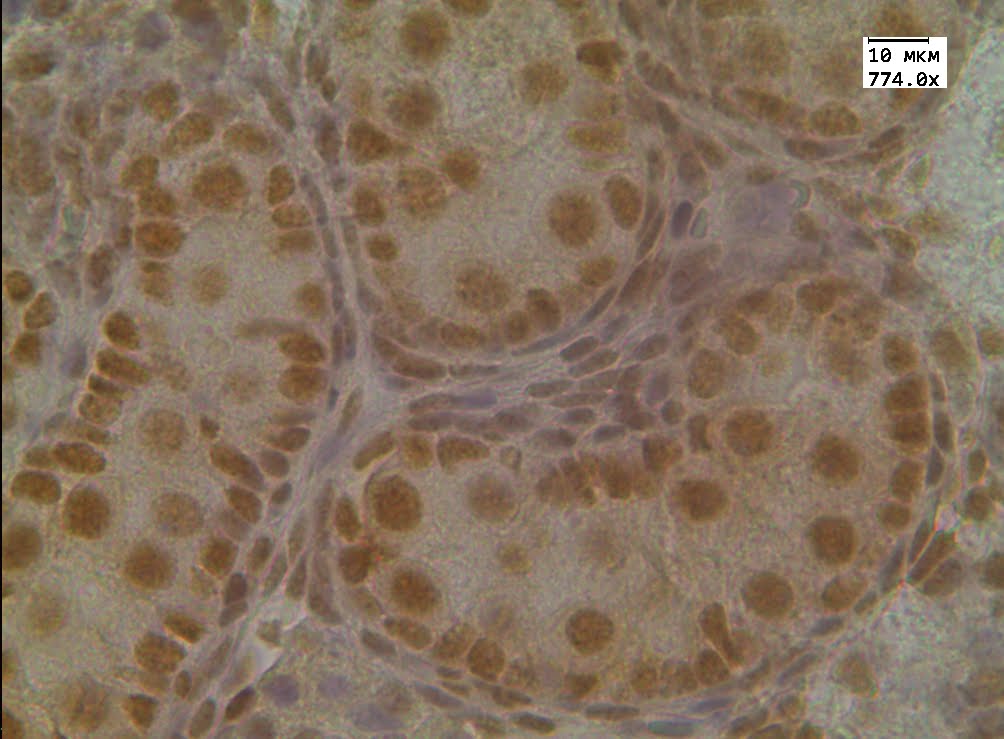 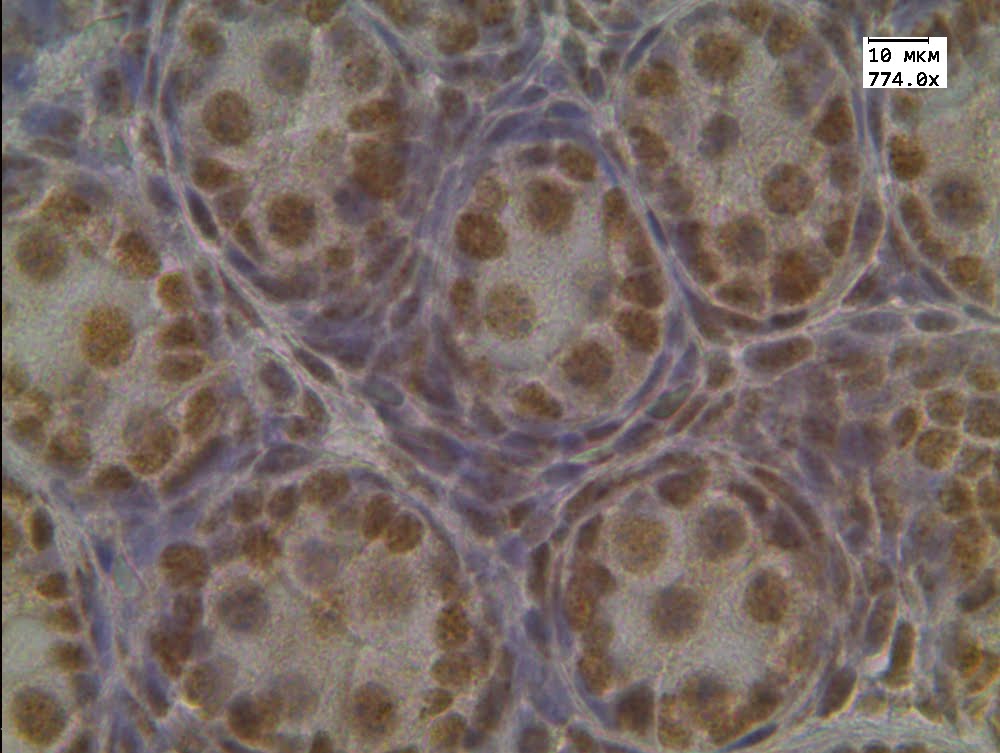 Analysis of experimental  results allowed to establish that oxygen deficiency has an adverse effect on the course of pregnancy and the consequences for the developing organism.

Data on the effect of chronic hypoxia on the fecundity of female rats in the literature are contradictory. In the work of Farias et al. [10], in the modeling of chronic intrauterine nitrite hypoxia, fertility index of female rats had comparable values in control and experimental groups. Other researchers [2] found a significant decrease in the number of rats in the litter in experimental group and it was noted that chronic hypoxia, developed in the first trimester of pregnancy, most strongly affects the number of offspring.

Results of research by Liu et al. [2] convincingly showed that in most cases of modeling chronic intrauterine hypoxia, the offspring experienced a significant decrease in body weight, body and tail length.

Our data on reduction of newborn rats weight are consistent with the data of other authors. In our study, we noted a decrease in the number of newborn rats from females with hypoxia, but no significant difference was with control group probably due to a small number of observations by groups.

In a number of studies, dystrophic and necrobiotic changes in the spermatogenic epithelium of the tubules, as well as sclerotic changes and a decrease in the number of Leydig cells were noted under the influence of hypoxia [4].

In the immunohistochemical study, we observed a decrease in the proliferative potential and an increase in the expression of the apoptosis marker in gonocytes, Sertoli and Leydig cells in the progeny of rats with hypoxia. Our data are consistent with the data of other authors [5].

Thus, as a result of the conducted studies it was found that antenatal hypoxia adversely affects the number and somatometric parameters of newborn rats in the offspring.

Histological examination of the testicle tissue showed a significant decrease in the number of tubules in the field of vision, a decrease in the diameter and area of the tubules, with a simultaneous growth of the stromal area, a decrease in the proliferative potential and an increase in the apoptosis of gonocytes, Leydig and Sertoli cells in the rats of the experimental group. This indicates a delay and violation of the development of testicular tissue in conditions of hypoxia already in the antenatal period.

It should be noted that the use of only immunohistochemical markers (Bax, Ki67) did not reveal the mechanisms of damage to fetal testicles. Prospects for further research we see in the study of the expression of markers of hypoxia (hypoxia-inducible factor, vascular endothelial growth factor) in the tissue of testicles affected by antenatal hypoxia.