Adrenal zona glomerulosa cells synthesize and secrete aldosterone, a steroid hormone regulating sodium and potassium levels and intravascular blood volume. Impact of environmental chemicals with endocrine disrupting effects on adrenal zona glomerulosa function is an emerging problem due to the essential role of aldosterone in cardiovascular physiology. According to World Health Organization, an endocrine disruptor is an exogenous substance or mixture that alters function(s) of the endocrine system and consequently causes adverse health effects in an intact organism, or its progeny, or (sub) populations [1].  Studies have shown that several environmental chemical pollutants with proven endocrine disrupting effect including dichlorodiphenyltrichloroethane (DDT) affect thyroid function, puberty, and reproduction in humans and animals [2-4]. DDT was one of the first recognized endocrine disruptors, with a broad range of effects on reproduction and hormonal systems [5]. Although the use of this chemical has long been banned in many countries, twenty-three countries in Africa, Asia, and Latin America use DDT for vector control [3] it is still present in the environment as an insecticide for malaria control in some countries [6]. The concern is that DDT pervades the environment in all forms of life due to its long environmental half-life and continuous use [7].

The main source of exposure to low doses of DDT in Europe is food products. Exposure can begin in the fetus through placental transfer, or in a breastfeeding infant [8]. Prenatal and postnatal exposure to DDT and its metabolites has become an important public health concern because of the possible impact of the endocrine disruptor on development and programming of organ function including endocrine glands and target organs of endocrine regulation. Possible alteration of adrenal glands development may provide higher susceptibility to metabolic disorders and impaired function of the cardiovascular and immune system [5]. It remains unclear whether low doses of DDT influence adrenal zona glomerulosa development and physiology.

The objective was to investigate secretion of adrenal zona glomerulosa cells in rats exposed to low doses of DDT during prenatal and postnatal development.

The experiment was carried out on male offspring of Wistar rats (n=48). The dams had received 20 μg/l solution of o,p-DDT (Sigma, USA) instead of water ad libitum since mating during pregnancy and lactation. After weaning the offspring also received the same solution instead of water. Average daily intake of DDT by the offspring was 2.90±0.12 µg/kg bw. The level of exposure to DDT was calculated using the requirements to the definition of low-dose determination and maximum permissible levels in food products [9, 10]. In the control groups, the animals (n=24) received tap water. Gas chromatography confirmed the absence of DDT, its metabolites and related organochlorine compounds in tap water and chaw. The first half of the control and experimental animals were sacrificed by zoletil overdose in puberty at the age of 42 days (groups P42 and DDT E0-P42, respectively) and the rest of the animals after puberty at the age of 70 days (groups P70 and DDT E0-P70, respectively) when development of adrenals in rat rich their maximum [11]. The experiment was approved by local Ethics committee and performed according to guidance «International guiding principles for biomedical research involving animals».

Tissues for electron microscopy were fixed in 1% glutaraldehyde with 0.1M sodium cacodylate, postfixed in 1% osmium tetroxide, dehydrated and embedded in a mixture of Epon and Araldite. Semithin sections were studied with light microscopy for selection of areas for ultrathin sectioning. Ultrathin sections were cut with “PowerTome XL” (RMC Boeckeler, USA) counterstained with uranyl acetate and lead citrate and examined with “Libra 120” electron microscope (Carl Zeiss, Germany).

The data were statistically processed using the software package “Statistica 7.0” (“StatSoft”, USA). All data (morphometric parameters and aldosterone serum levels) were submitted to Shapiro-Wilk’ W test of normality. The central tendency and dispersion of quantitative traits, with approximately normal distribution, were presented as the mean and standard error of the mean (M±m). Comparison of independent groups by variables was performed using Student t-test taking into consideration the Levene’s test on equality of variances, and Chi-square. Differences were considered statistically significant at p<0.01.

Quantification of aldosterone in serum

Rats exposed to low doses of DDT during prenatal and postnatal development showed lower aldosterone serum levels in puberty (Figure 1). No significant differences in serum aldosterone were found in adult DDT-exposed and control rats (Figure 1). Age-dependent elevation of aldosterone production was revealed both in the control and DDT-exposed animals. 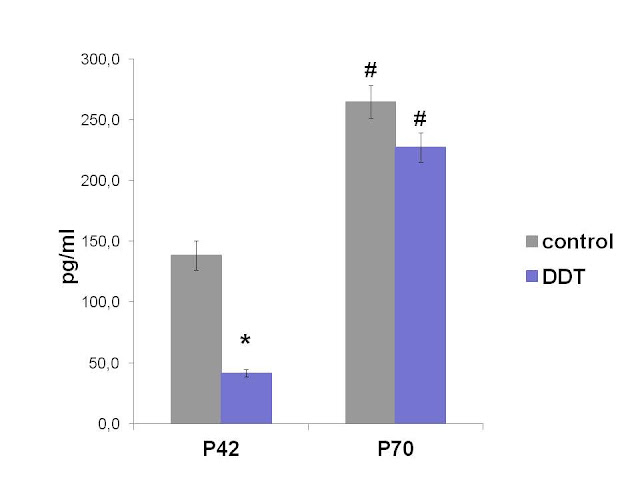 In the control pubertal rats zona glomerulosa, an outmost concentric layer of the adrenal cortex, was composed of the oval in shape cells with light cytoplasm. The area of zona glomerulosa in pubertal rats exposed to low doses of DDT prenatally and postnatally was diminished compared to control (Table 1) mainly due to clustered structure and focal absence under the capsule substituted by undifferentiated zone. Dilatation of capillaries, obturation of their lumen by red blood cells, and single microhemorrhages between zona glomerulosa and zona fasciculate were revealed in zona glomerulosa.

Data are presented as the mean and standard error of the mean – M±m. * –  significant differences (P<0.01) in comparison with appropriate controls, # – previous term. P, day of postnatal development (e.g., P42 and P70).

In the control pubertal rats, the endocrine cells of zona glomerulosa were elongated. The nucleus oval in shape and uniformly filled with chromatin and a nucleolus. A perinuclear Golgi complex was occasionally identified. Vesicles of the smooth endoplasmatic reticulum were dispersed in the cytoplasm. Numerous mitochondria were distributed in the cytoplasm. Mitochondria were oval or elongated and had plate-like cristae. Almost half of them had swollen matrix. Lysosomes were rarely observed. Few single or clustered lipid drops were scattered in the cytoplasm (Figure 2a).

In pubertal rats exposed to DDT prenatally and postnatally, zona glomerulosa cells were decreased in size compared to control values (Table 1). Nuclei had a normal structure, but in some cells, euchromatin was increased and the perinuclear area was widened. There was a marked increase in the number of lipid droplets (Table 1, Figure 2b). Lipid droplets were small in size and had higher electron density. Percentage of mitochondria with swollen matrix was reduced (Table 1). Rough endoplasmatic reticulum was more prominent. 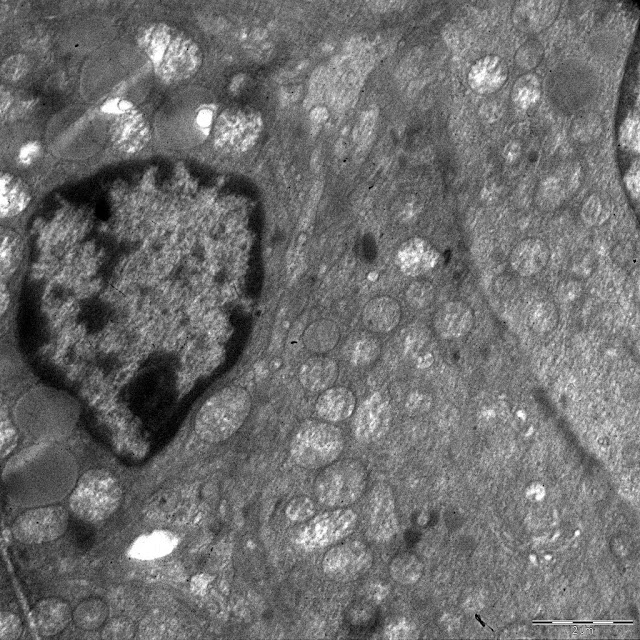 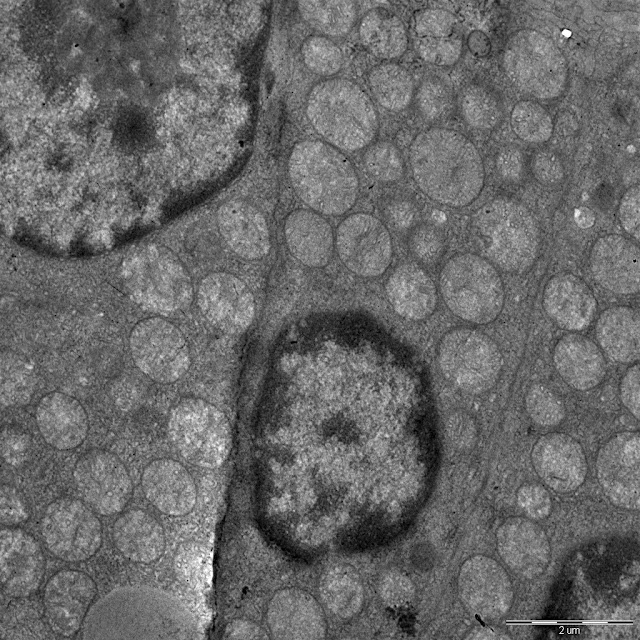 B
Figure 2. Ultrastructure of zona glomerulosa cells of the control rats on 42nd (a) and 70th (b) day.

Electron microscopic studies of zona glomerulosa cells of the adult control rats on the 70th day of postnatal development found decreased cell size. The number of mitochondria increased, percent of mitochondria with swollen matrix reduced compared to 42nd day (Table 1). The size of mitochondria reduced. Some mitochondria contained tubular as well as plate-like cristae. The ultrastructure of the nuclei was identical to the previous term. Golgi complex was less prominent. Lysosomes were still rarely observed. The average volume of lipid droplets decreased with age, but this index was discrete. Some cells contained a large number of small lipid droplets which did not contact with mitochondria. The most cells showed reduced lipid deposits or complete absence of lipid droplets in the cytoplasm (Figure 3a).

In the DDT-exposed rats, size of glomerulosa cells did not decrease with age (Table 1). The sizes of the cells and their nuclei were identical to the control values. Mitochondria of the same size were oval or elongated (Figure 3b). The number of mitochondria in the cytoplasm increased but did not reach the control values (Table 1). Dilated cristae and swollen matrix were found in some mitochondria. Age-dependent reduction in a number of mitochondria was not observed (Table 1). Rough endoplasmatic reticulum was less prominent compared to the 42nd day of postnatal development. There was a marked decrease in lipid droplets (Table 1, Figure 3b). 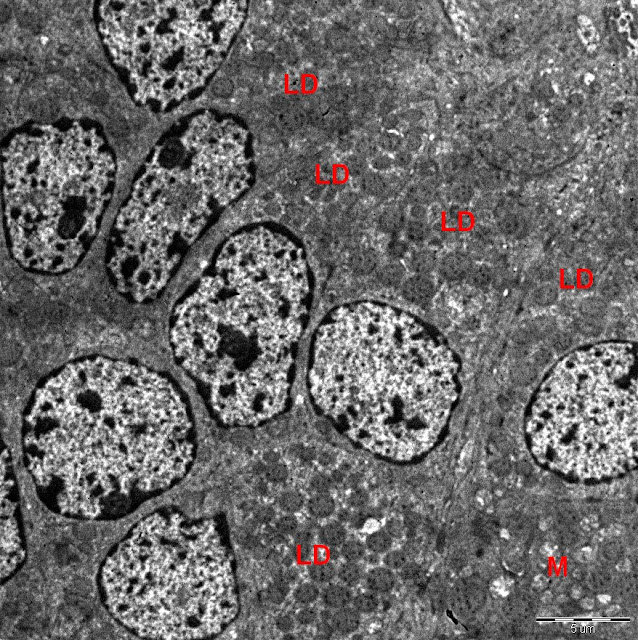 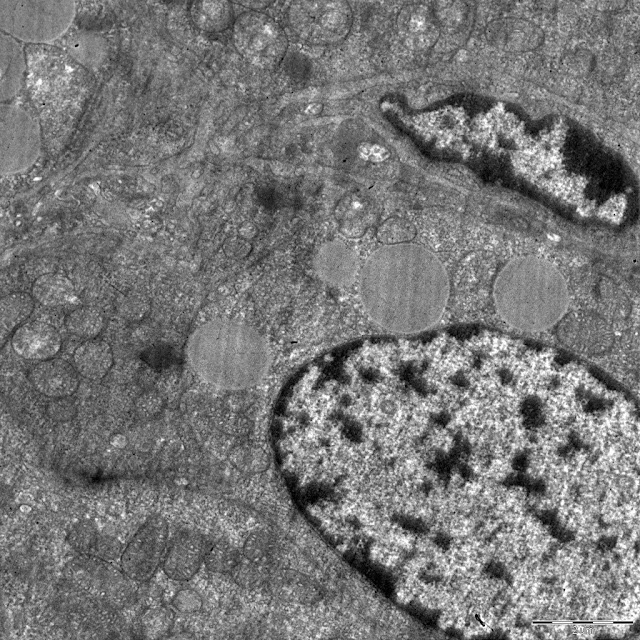 This is the first study of zona glomerulosa morphology and function in full-term prenatal and postnatal exposure of rats to low doses of endocrine disruptor DDT. The exposed rats showed fragmentation of zona glomerulosa on the 42nd day and its hyperplasia on the 70th day. This data indicates that DDT provokes retardation of zona glomerulosa development before puberty and its acceleration after puberty. Impaired development of zona glomerulosa in puberty was associated with a decrease of serum aldosterone level. Light and electron microscopic examination found some morphological changes which may also contribute to reduced aldosterone production. Circulatory disorders like red blood cells stasis in capillaries and microhemorrhages may provide hypoxia in glomerulosa cells which are proved to inhibit glomerulosa cell functional activity [12]. Accumulation of lipid droplets in the cytoplasm, as well as reduction of a number of mitochondria with swollen matrix, is considered as signs of lowered functional activity of steroid-producing adrenal cells [13]. It is very important to note that decreased aldosterone production was associated with ultrastructural signs of increased protein synthesis in glomerulosa cells like more developed rough endoplasmatic reticulum, a large number of ribosomes in the cytoplasm, high euchromatin content, and dilatation of perinuclear space found in some cells. These findings indicate that DDT-induced inhibition of steroidogenic activity caused reactive acceleration of enzyme synthesis in glomerulosa cells probably due to activation of the renin-angiotensin system. This hypothesis is supported by signs of active steroidogenic activity like large size of cells and lowered volume of lipids on the 70th day of postnatal development and restoration of aldosterone serum level. Similar changes in enzyme synthesis were observed in rat thyroid follicular cells after long-term exposure to low doses of DDT in response to reduced thyroid hormone production [4, 14]. The remarkable increase of zona glomerulosa area by the 70th day also contributed to the elevation of aldosterone production. According to La Merrill et al. perinatal exposure of mice to DDT from 11.5 day of prenatal development to 5 day of postnatal development results in elevated blood pressure and higher expression of sodium transporter caused by an overactivation of the renin-angiotensin system in adulthood [15]. These findings suggest activation of aldosterone production. But in the present study, we did not reveal hyperfunction of zona glomerulosa either in pubertal or in adult rats.

Electron microscopic examination of the adrenal cortex revealed some age-dependent changes in the fine structure of glomerulosa cells in the control rats. In adult rats, mitochondria decreased in size but increased in number and exhibited polymorphism of cristae. Swelling of a matrix of mitochondria was rarely observed. The content of lipid droplets slightly increased. These changes suggest that secretory machinery of glomerulosa cells differs in adulthood and puberty. Initial and final steps of steroidogenesis occur in mitochondria [16]. Increased total number of mitochondria and lowered percent of mitochondria with swollen matrix indicate higher efficacy of intramitochondrial synthesis in adulthood. Changes in the structure of cristae also allow the increasing surface of the inner mitochondrial membrane and intensifying cellular respiration. These changes, however, were not observed uniformly in all mitochondria. Changes like these are typical for zona glomerulosa of rats after administration of adrenocorticotropic hormone and related to increased production of aldosterone. Prenatally and postnatally exposed to DDT rats showed less pronounced changes in number and size of mitochondria with age.  It means that developmental exposure to DDT does not alter-mode of development but impairs its rate. Lack of mitochondria in glomerulosa cells, lowered percent of mitochondria with the swollen matrix, and higher lipid content on the 70th day compared to control indicate that the mechanism of 5-fold increase of aldosterone production is hyperplasia of zona glomerulosa.

All procedures performed in studies involving animals were in accordance with the ethical standards of the institution or practice at which the studies were conducted.