romj-2018-0308.pdf
Abstract:
Background ― Cadmium zinc telluride (CZT) solid-state detectors have been recently introduced in the field of nuclear medicine in cardiology. The aim of the current study was to investigate the scintigraphic patterns of total uptake and the regional distribution of iodine-123 metaiodobenzylguanidine (123I-mIBG) in healthy volunteers and patients with atrial fibrillation (AF) using a gamma camera equipped CZT detectors. Material and Methods ― The total number of included subjects was 30 (15 patients with a paroxysmal form of AF and 15 healthy volunteers). Using a novel single-photon emission computed tomography (SPECT) cardiac dedicated gamma camera equipped CZT-detectors the scintigraphy was performed 15 minutes and 4 hours after intravenous administration of norepinephrine structural analogue 123I-mIBG. Thus, data from early and delayed phases were obtained. The heart-to-mediastinum ratio of 123I-mIBG uptake at 15 minutes (HMRe) and 4 hours (HMRd), as well as the washout rate (WR) and summed 123I-mIBG score (SMSe, SMSd) were measured. Results ― Patients and volunteers showed comparable results of the median ratio of 123I-mIBG uptake in the heart and mediastinum (HMR) in the early and delayed phases (p>0.05). In 14 (93%) patients with AF, 123I-mIBG uptake defects in LV myocardium were detected as compared with 8 (53%) healthy individuals (p<0.05). The healthy volunteers showed no significant 123I-mIBG uptake defect in delayed scans compared with a median result in patients with AF (p<0.001). Conclusion ― SPECT gamma camera with CZT-detectors is suitable to obtain qualitative tomographic slices of the myocardium and to assess regional changes in sympathetic innervation of the heart, which can be the early signs of an imbalance in the autonomic nervous system. Therefore, this camera may be useful for managing patients with various forms of AF.
Keywords:
iodine-123, cardiac mIBG imaging, CZT SPECT, sympathetic nervous system, atrial fibrillation
Cite as:
Minin SM, Nikitin NA, Shabanov VV, Losik DV, Mikheenko IL, Ponomarev DN, Pokushalov EA, Romanov AB. Evaluation of CZT SPECT imaging for cardiac sympathetic innervation in healthy individuals and patients with atrial fibrillation. Russian Open Medical Journal 2018; 7: e0308.

Atrial fibrillation (AF) is the most common tachyarrhythmia in clinical practice, creating a high risk of stroke, thromboembolic and cardiac complications [1-2]. It is known that the autonomic nervous system (ANS) of the heart and its sympathetic division, in particular, is one of the key elements in the onset and maintenance of AF [3-4]. This is confirmed by a number of experimental studies, which showed a decrease in the inducibility of AF after denervation of the heart [5-7]. In addition, the effect on the ANS in the interventional treatment of AF increases the effectiveness of ablation procedure [8-9].

To date, in radiological practice, cardiac imaging with a neuronal tracer, in particular, with metaiodobenzylguanidinelabelled with iodine-123 (123I-mIBG), is actively used for non-invasive evaluation of the state of sympathetic cardiac activity [10]. This tracer is a structural analogue of norepinephrine and reflects the process of its uptake, storage, and release in sympathetic nerve-endings [12]. The use of cardiac single-photon emission computed tomography (SPECT) with 123I-mIBG allows one to evaluate regional presynaptic reuptake of catecholamines, the functional state of sympathetic endings, and indirectly to estimate the density of adrenoreceptor of the heart [13].

As a general rule, indicators of planar scintigraphy and regional 123I-mIBG uptake, in a less degree, [14] are used to assess changes in sympathetic activity. This is due to the need to introduce large doses of tracer and to increase the duration of the SPECT data acquisition on Anger cameras (with NaI-based crystals). However, in recent years, this problem has been solved through the development and introduction into clinical practice of gamma cameras equipped with semiconductor cadmium-zinc-tellurium (CZT) detectors [15]. Due to the high sensitivity of the detectors and the higher spatial resolution, it became possible to obtain qualitative tomographic sections of the heart and to estimate the regional 123I-mIBG uptake.

At the same time, only a few studies have been published in the world literature devoted to the scintigraphic study of violations of sympathetic innervation of the myocardium in patients with heart rhythm disorders and the use of CZT technologies [16, 17].

The aim of present study was to assess the scintigraphic patterns of total uptake and the regional distribution of 123I-mIBG in healthy volunteers and patients with paroxysmal AF with a gamma camera equipped with CZT-detectors.

The median duration of AF history in the patient’s group was 42 (28, 72) months. In 8 (53.3%) patients, the CHA2DS2-VASc score was ≥2. Subsequently, patients with AF had a catheter ablation performed according to the guidelines [2].

The study was carried out in accordance with the standards of GCP (Good Clinical Practice) and the principles of the Declaration of Helsinki. The study protocol was approved by the expert council and the local ethics committee of the Meshalkin National Medical Research Center (Novosibirsk, Russia). Prior to enrollment, written informed consent was obtained from all patients. The study was registered in the international database (NCT02914860) and is part of a project supported by a grant from the Russian Science Foundation №17-75-20118.

The study protocol included 123I-mIBG intravenous administration at a dose of 370±10% MBq and the conduct of acquisition in 15 minutes (early study) and 4 hours after the injection (delayed study). All patients underwent thyroid uptake blockade using Lugol's solution for 3 days before the study and 3 days after the study with 123I-mIBG (5 drops of Lugol's solution 3 times a day).

Cardiac scintigraphy was performed on a gamma camera with solid-state detectors based on cadmium-zinc-tellurium crystals (D-SPECT, Spectrum Dynamics Medical Inc.). Data acquisition using 9 moving low-energy wide-angle collimators, a spatial resolution of 8.6 mm (voxel size 4.92×4.92×4.92 mm). The centre of the energy window was set to a photopeak of 123I – 159±10 keV. The width of the energy window was symmetrical and amounted to 10%. The collection time was 600 seconds. Correction for attenuation and dispersion was not carried out. The total effective dose was 6.0-7.3 mSv. Images were reconstructed in a workstation using the OSEM iterative reconstruction algorithm. The analysis of the obtained images was carried out using dedicated software packages: PlanarH2M (Spectrum Dynamics Medical Inc.) for calculating heart to mediastinum ratio, quantitative perfusion SPECT (QPS) applications (Cedar Sinai Auto Quant, QBS, QPS v7.2) for semiquantitative determination of the regional 123I-mIBG uptake in the left ventricular (LV) myocardium [18] (Figure 1). 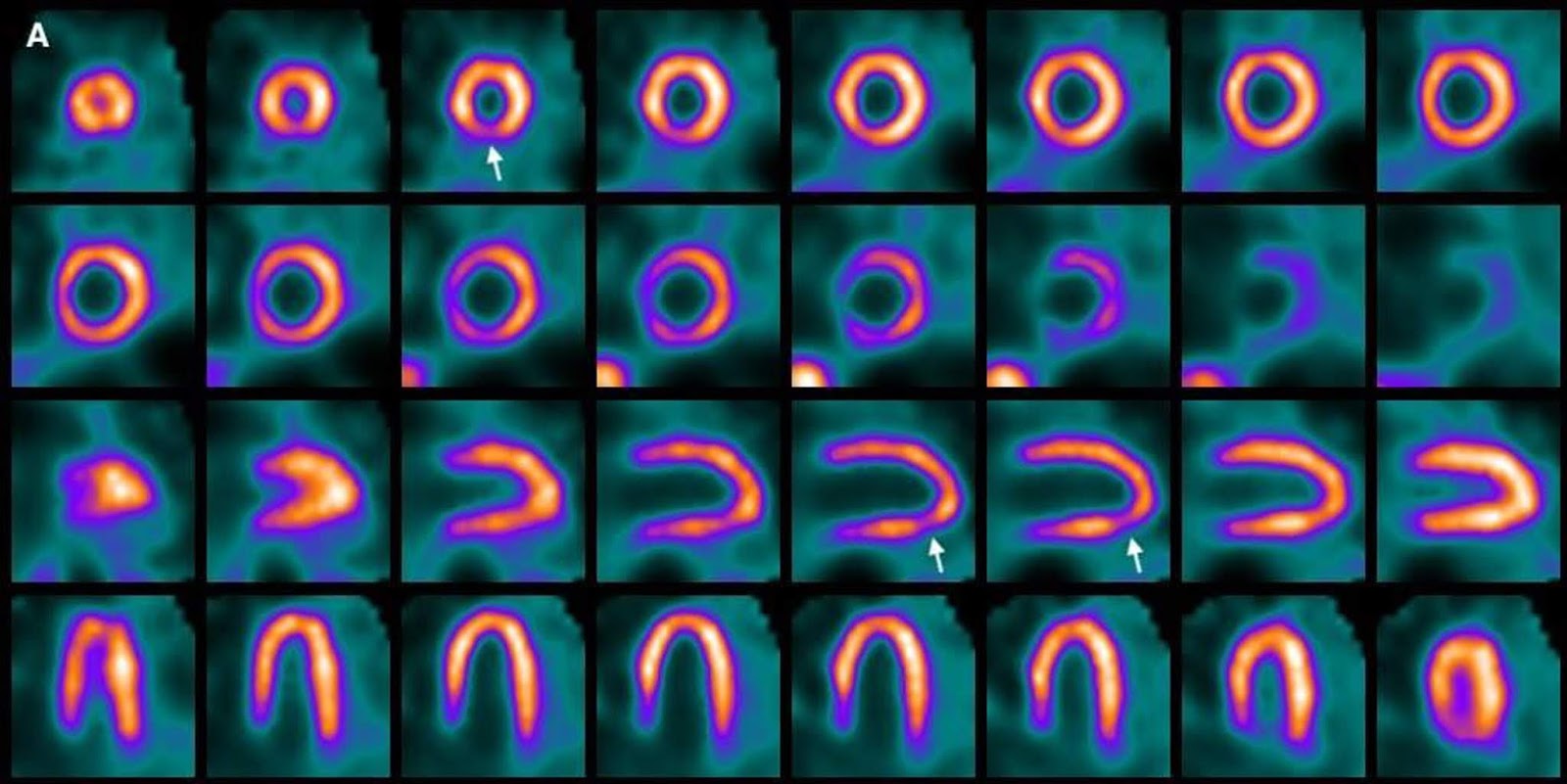 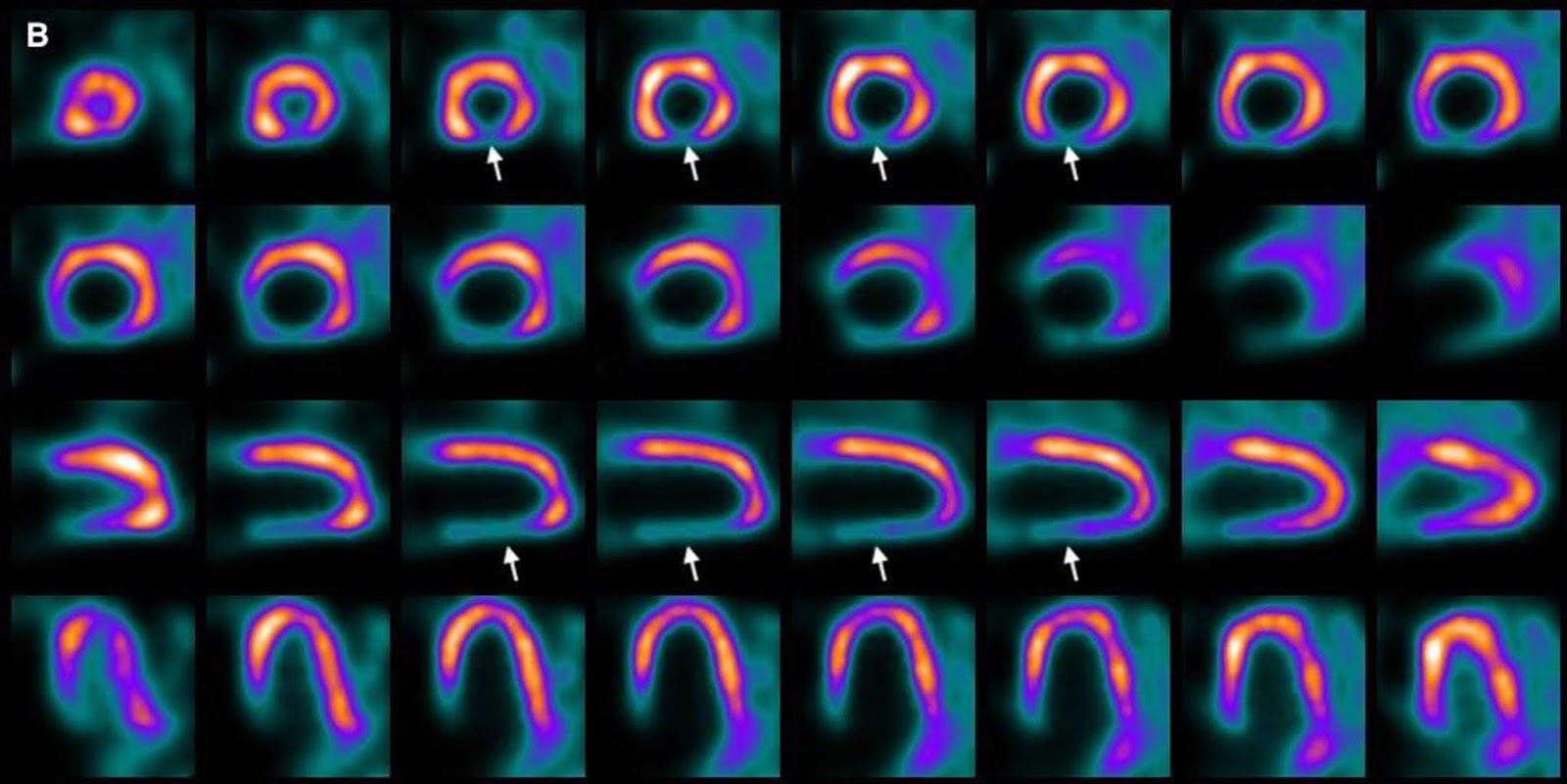 Continuous data are presented as medians with interquartile range – Me (IQR). Independent samples were compared with Wilcoxon rank sum test. Wilcoxon signed rank test was used for paired samples. Categorical variables are presented as numbers and percent – no. (%), comparisons were done with Fisher’s exact test. To assess associations between two continuous variables, linear regression was used; results are presented as regression estimate (i.e. a measure of association between the outcome and predictor), associated 95% confidence interval (95% CI) and p-value for a trend. Missing values were not imputed. All the presented p-values were based on a two-sided test and a p-value <0.05 was considered statistically significant. 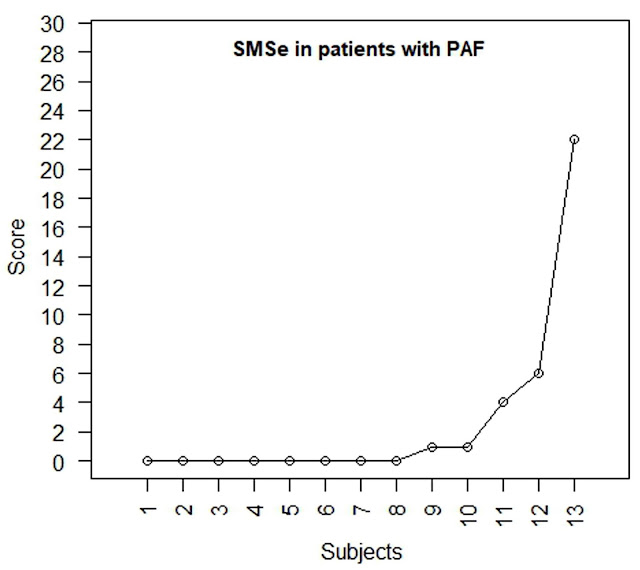 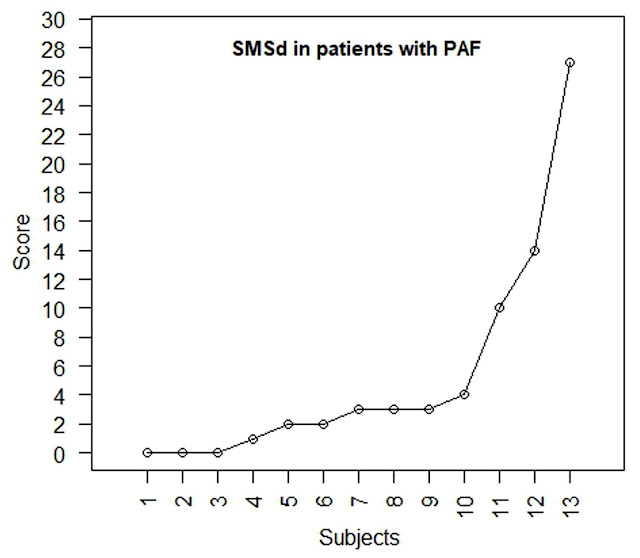 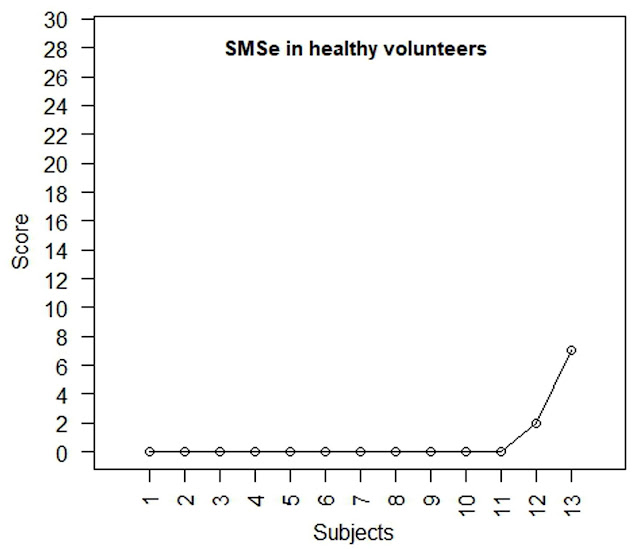 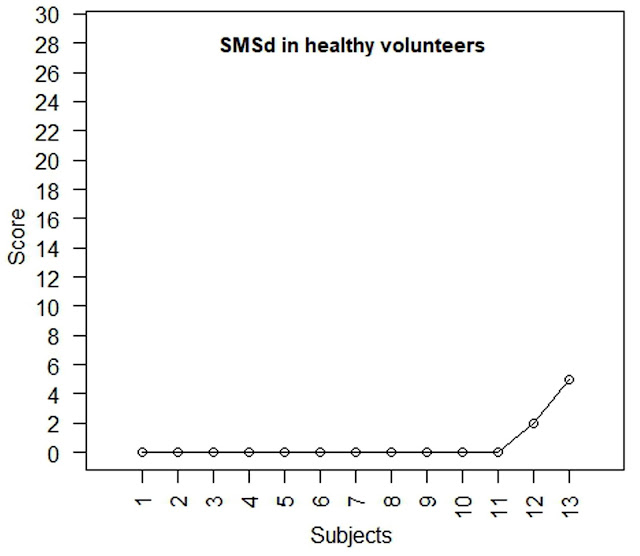 Many studies have demonstrated the impact of the ANS imbalance in the initiation and maintenance of AF [2, 11]. The experimental data has shown the effect of disturbance of sympathetic innervation of the heart on the vulnerability of the left atrium for arrhythmogenic triggers arising from pulmonary veins [2].

Our study revealed a number of features of the scintigraphic patterns of total uptake and the regional distribution of neuronal tracer 123I-mIBG in the myocardium of the LV in healthy individuals and patients with paroxysmal AF.

Analysis of the regional uptake of 123I-mIBG in LV myocardium in healthy individuals and patients with AF demonstrates heterogeneity of the indicator distribution with the presence of sites of reduced uptake in the inferior wall and the apical region of the left ventricle. Similar data were obtained in a study by Gill et al. in which a lower degree of 123I-mIBG uptake in the area of the inferior wall and septum was noted in healthy volunteers compared to anteroposterior LV divisions [22]. The defects of 123I-mIBG uptake in the myocardium of the left ventricle were more common in patients with AF than in healthy volunteers. In this case, patients with AF had a more significant decrease in regional 123I-mIBG uptake in the delayed phase (SMSd). One of the possible explanations for this fact can be an increase in the tone of the sympathetic division of the ANS in response to a violation of the systolic function of the heart in the absence of a phase of atrial systole and the development of LV myocardial dysfunction. This hypothesis is confirmed by the results of a number of studies in which it has been established that even short-term myocardial ischemia can lead to so-called sympathetic cardiac remodelling [23, 24]. Another explanation for the changes revealed is the development of dyssynchrony of myocardial contraction of the left ventricle in AF patients. In this case, as known, the inferior wall and septum are more sensitive than other segments of the LV myocardium, to a violation of the contraction sequence [25]. Therefore, in patients with a high frequency of AF paroxysms or with a longer duration of arrhythmia, it is possible to identify more significant regional pathological changes in sympathetic innervation of the LV myocardium.

In our study, between patients with AF and healthy volunteers, there was no significant difference in parameters such as the heart/mediastinum (H/M) ratio and the washout rate (WR) of the tracer. In our opinion, this may be due to the small impact of the inferior wall and LV apex to the scintigraphic planar image of the heart, which reduces the difference in the severity of defects in radiopharmaceutical uptake in these areas of the myocardium. In addition, the results obtained could be affected by the form and duration of the AF. In the study of Grishaeva et al. [12] a disturbance of sympathetic activity of the myocardium, proportional to the duration of arrhythmia, was established in patients with a persistent AF.

The limitations of the study stem from the relatively small sample size that may have resulted in imprecise estimates and lack of statistical power to detect differences within and between the groups.

Not withstanding the above limitations, it seems promising to analyze the regional distribution of 123I-mIBG in the myocardium of the left ventricle and near-cardiac structures for a non-invasive evaluation of the functioning of the ANS, predicting the course and choosing the optimal tactics for managing patients with various forms of AF.

This work was supported by a grant from the Russian Science Foundation No. 17-75-20118.

The authors declare that they have no other conflict of interest.