Tuberculosis among pediatric population in the Extreme North of Russia

Fight against tuberculosis (TB) or TB control is still among the world’s major objectives, and, as such, is driving the main focus areas of global public health [1]. The action planning by health services is based on clear understanding of the TB prevalence. Accumulation and analysis of key epidemiologic indicators describing the scale and size of the problem of TB serves as yet another mechanism, using which the spread of TB can be further contained within a region, a country, or the world [2].

Among European countries, Russia ranked sixth for TB notification rates in 2013, next to Republic of Moldova (129), Kyrgyzstan (128), Kazakhstan (115), Ukraine (81), and Georgia (79 per 100,000 population). Interestingly, in the same 2013, concordance between new TB case detection rates and the proportions of notified new and relapse cases was relatively low in all countries (64%), compared to Russia (85%) [3]. According to World Health Organization (WHO), in 2015, the lowest notification rates for TB were reported from the counties of European (3.1%), and American (2.6%) regions [4].

Starting in 2009, TB incidence in Russia has been observed to decline steadily, 59.5/100,000 in 2014 versus 82.6/100,000 in 2009. These improvements in epidemiologic indicators for TB and indicators characterizing the level of medical care for TB count as indirect evidence of the stabilizing trends in domestic social processes and in population quality of life, as far as TB is seen not only as a derivative of the quality of life (QOL), but also, a marker of the condition of society [5].

During recent years, positive trends in TB epidemiology have started to be observed in the regions of the Far East Federal District (FEFD), as well. According to data reported by the Novosibirsk TB Research Institute, TB incidence in FEFD has declined by 36.1% for the last 10 years (2007-2016), but is still 1.8 times higher than the average national incidence. A decrease was observed in the following indicators in FEFD: proportion of new cases of fibrocavitary TB (from 4.4% to 1.4%); proportion of posthumously diagnosed cases (from 1.5% to 1.4%); mortality among new cases (from 4.6% to 2.2%). Mortality has decreased by 41.6% [6].

The most urgent problems existing today in the regions of FEFD referred to the Extreme North area are: TB caused by multidrug-resistant M.tuberculosis (MTB); high TB incidence in children from hard-to-reach populations (migrants, formerly imprisoned individuals, native population leading nomadic life) [7]. Observations have been made by researchers, that social, climatic, and ecological factors contribute to unfavorable situation with TB in FEFD [8].

To summarize, despite the general improvement in epidemiologic situation with TB over RF, the problem of TB remains acute in FEFD. Incidence and mortality rates in FEFD, both in adult, and pediatric population exceed the average national rates. This suggests that the existing organization of work on prevention and early detection of TB in children is not allowing sufficient reduction in disease incidence. In view of the above said, there is growing need to estimate trends in TB epidemics by regions within FEFD, and to provide scientific rationale to back up the interventions aimed at improving the organization of work on TB control, which should take into consideration the regional specifics, and this was what determined the importance of this study.

This study aimed to analyze trends in TB epidemics in the Sakha Republic (Yakutia), with the purpose of developing scientifically-grounded program for organizing anti-tuberculosis measures among pediatric population of the Extreme North.

This study was performed as part of larger multi-center research approved by the Academy of Sciences of the Sakha Republic (Yakutia): “Multivariable research on the health status of the aboriginal and non-aboriginal population of the Sakha Republic (Yakutia), to optimize regional programs aimed at raising the quality of life of the residents of Yakutia, factoring in the distinct geographic and ethnic characteristics, and set in the context of modern-day socio-economic advancement” (Government contract no. 6512, issued September 6, 2017).

The study took place in the Sakha Republic (Yakutia), the largest subject of the Russian Federation, lying in north-east of Eurasian continent. Yakutia has an area of 3.1 mln km2, more than 40% of its territory lies above the Arctic Circle, and it covers three time zones. Up to now, Yakutia is one of the world’s most isolated and hard-to-access regions in terms of transport, as year-round transport service is lacking in 50% of its area. The territory of Yakutia is basically solid ancient 300-400-meter-thick permafrost. Natural environment and climate conditions in Yakutia are defined as extreme conditions, with long winters and short summer seasons. The territory of Yakutia covers four various types of geographic zones: taiga forest, tundra, tundra forest, and Arctic wilderness. According to 2010 Russian population census, total population of Yakutia was 9585 thousand people. Proportions of urban and rural population were, respectively 64.1% and 35.9%. Yakutia is a home to more than 120 ethnicities; largest of them are Yakuts (49.9%) and Russians (37.8%) [11].

The indicators for pediatric tuberculosis in Russia and Far East Federal District were obtained from official web-site of the Federal Research Institute for Health Organization and Informatics of Ministry of Health of the Russian Federation (http://mednet.ru).

Rates of TB incidence, prevalence, and mortality in the population of the Sakha Republic (Yakutia) were calculated as per 100,000 population.

For the purposes of a more detailed analysis of the epidemiological indicators (incidence, prevalence, primary TB infection prevalence) in the pediatric population of the Sakha Republic (Yakutia), a long 20-year period was divided to two shorter periods: Period I (1997–2006) and Period II (2007–2016).

Statistical data were processed using conventional application software packages for PC use. Student’s t-test was employed to determine the significance of differences between data sets compared. The critical significance level for the null hypothesis (absence of meaningful differences or factor influences) was 0.05. Statistical indicator was regarded as significant at p<0.05. The software used for statistical analysis of data was IBM SPSS STATISTICS 22.

Pearson’s chi-squared test (fourfold table) was used to compare groups for qualitative variables. The strength and direction of the relationship between quantitative variables were analyzed using Spearman rank correlation analysis.

Key epidemiologic indicators for TB in the Sakha Republic (Yakutia) were found to have undergone substantial changes over the period from 1997 to 2016 (Figure 1).

Our study showed the presence of statistically significant correlation between the rates of pediatric incidence and prevalence of TB in general population over the period from 1997 to 2016 (r=0.847, p=0.001).

A more thorough analysis of long-term trends in mortality from TB in the Sakha Republic (Yakutia) was performed, as far as this indicator is one of the most indicative ones (Figure 2).

Correlation analysis between total TB mortality and pediatric TB incidence in Yakutia over the period from 1997 to 2016 showed statistically significant correlation between the two indicators (r=0.514, p=0.020).

Results of comparative analysis of pediatric TB incidence between Sakha Republic, FEFD, and Russian Federation, are presented in Figure 3. 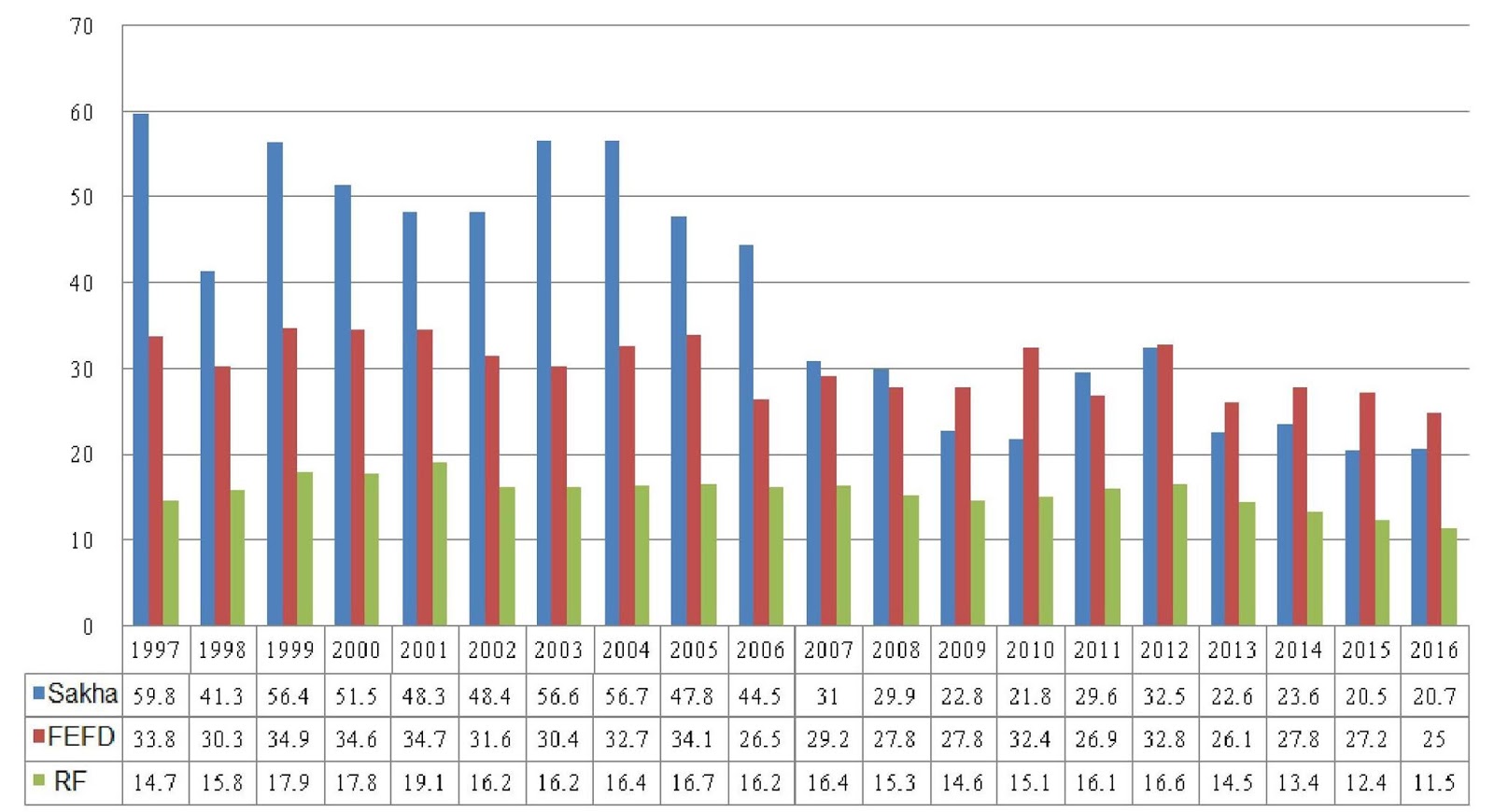 As is commonly accepted, adequacy of organization of preventive measures can be told from the presence of well-defined correlation between pediatric TB incidence and total TB incidence. Hence, the respectful indicators have been analyzed comparatively over the period from 1997 to 2016 (Figure 4). 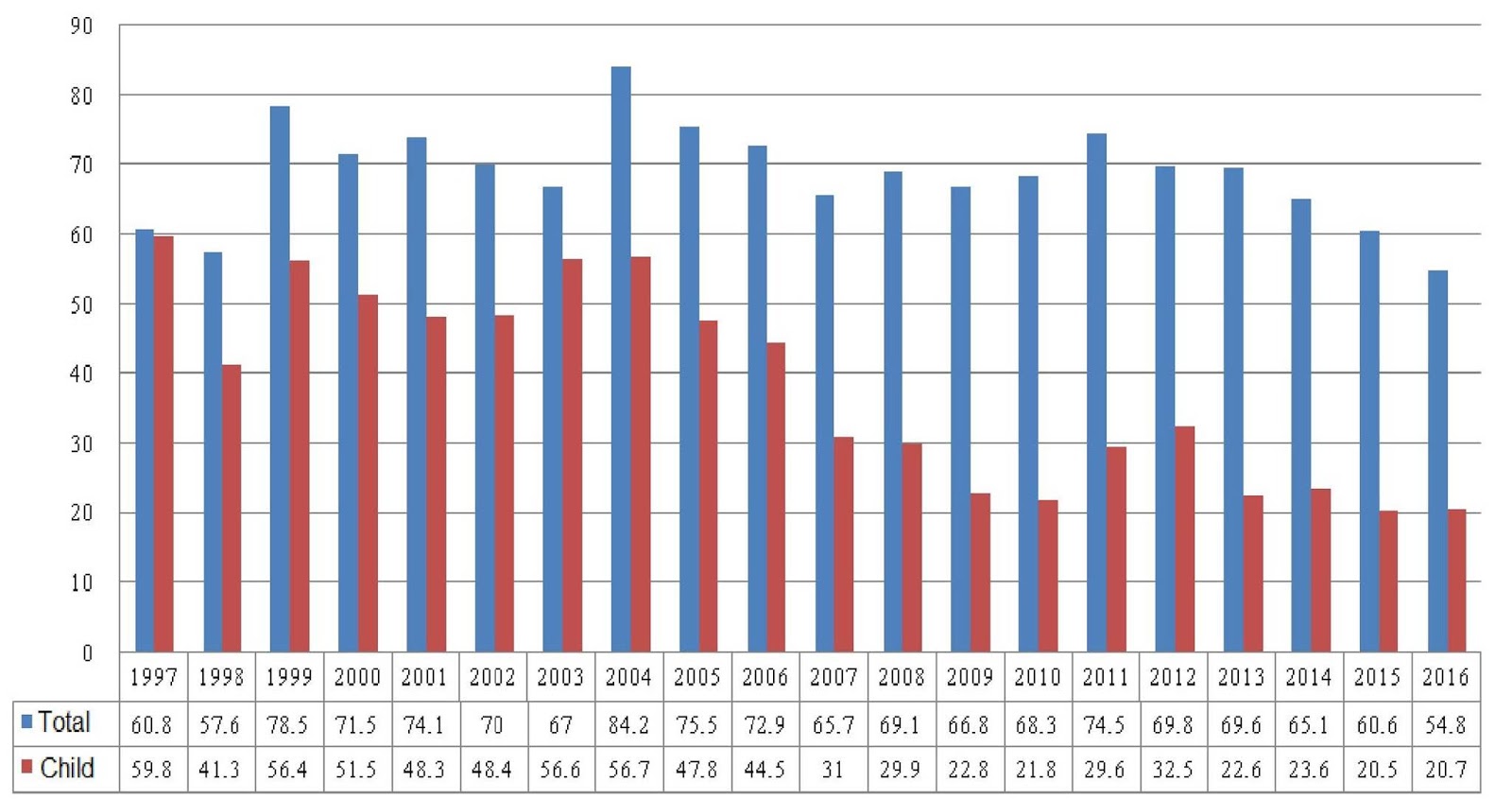 It should be specified, that the proportion of pediatric cases among total number of patients notified in the Sakha Republic (Yakutia) for the period I was 15.6%, and 7.2% for the period II.

Prevalence of TB is a known indicator characterizing the TB infection reservoir in a region. Therefore, trends in pediatric TB prevalence in Sakha Republic were analyzed for two study periods (Table 3).

Correlation analysis between the rates of pediatric incidence and prevalence of TB over the period from 1997 to 2016 showed the presence of statistically significant correlation between the two indicators (r=0.847, p=0.001).

Correlation analysis between primary TB infection prevalence and pediatric TB disease incidence established, that over the years 1997 to 2016, statistically valid correlation between the two indicators was observed (r=0.574, p=0.008), which signals the failures in preventive work among children with latent TB infection.

Long-term trends in key epidemiologic indicators for TB in the Extreme North region of Russia, the Sakha Republic (Yakutia), showed substantial changes over the period from 1997 to 2016. Overall stabilization trend started in 2000, and incidence and prevalence of TB started to decline in 2012. Over the period from 1997 to 2016, TB incidence in the republic reduced by 10%, prevalence reduced by 42.4%, and mortality decreased by 46.2%. Decline of TB mortality was more pronounced during the period from 2007 to 2016 (mean decline rate 5.6%). These findings confirm the stabilization of epidemiologic situation for TB in the Sakha Republic, with a gradual trend towards improvement.

Incidence of TB among pediatric population had significantly changed, as well, over the 20-year period. The first half of study period (1997-2006) is characterized with heightened mean TB incidence (51/100,000 children), and low decline rate (-3.2%), while the second half of study period (2007-2016) had low mean incidence of TB (25.5/100,000) and high decline rate (-4.4%). Data for the period from 1997 to 2016 show statistically reliable correlation between total TB incidence in general population and pediatric TB incidence (r=0.476, p=0.034). It should be acknowledged, that rise rates of pediatric TB incidence in Yakutia were higher, then in Russia, and had been steadily more than 4 times higher since 1997 and ever after.

In the Sakha Republic (Yakutia), the proportions of notified pediatric cases among the total number of detected new TB cases were 15.6% for study period I and 7.2% for period II. A research [12] showed that in 2000 pediatric cases made 9.6% in 22 countries with high TB burden; this is lower than period I proportion for Yakutia, but higher than period II proportion in Yakutia. Compared to data from other countries, in the Sakha Republic (Yakutia), the proportion of pediatric cases among total pool of notified TB cases was lower than in Pakistan (25.3%), Brazil (20.7%), and South Africa (16.1%), but higher than in Indonesia (2.7%), Vietnam (5.3%), and China (5.3%).

Despite some positive trend over long-term study of TB epidemiological process in the Sakha Republic (Yakutia), a region of Russia in the Extreme North, the problem of TB remains acute, which is apparent from high level of pediatric incidence. This calls for adopting such scientifically-grounded methodological approach to TB infection surveillance and monitoring, that would factor in regional specifics of those regions of Russia, which lie in the Extreme North.

This study was funded by the Academy of Sciences of the Sakha Republic (Yakutia) as part of the following research: “Multivariable research on the health status of the aboriginal and non-aboriginal population of the Sakha Republic (Yakutia), to optimize regional programs aimed at raising the quality of life of the residents of Yakutia, factoring in the distinct geographic and ethnic characteristics, and set in the context of modern-day socio-economic advancement” (Government contract no. 6512, issued September 6, 2017).

The author declares no conflict of interest.

The author expresses sincere gratitude to Tatyana Klimova and Lisa Burtseva for their assistance in preparing the article for publication.