Though currently, the appropriate management of patients with CTEPH and LMCS remains unknown, BPA seems quite promising. BPA “fights” with very cause of LMCS – pulmonary hypertension. So we considered BPA as a useful instrument for our new strategy. In this case we report for the first time hybrid treatment strategy for patient with CTEPH, complicated by LMCA.

A 61-year-old woman with severe dyspnea, chest discomfort on exertion and legs swelling was admitted to our PH department. She had chronic hip subluxation that limited her physical activity. By that time, she had 12-year disease anamnesis.

In 2003 patient experienced first episode of dyspnea but did not go to a doctor. Starting that time till 2008 her status was deteriorating. In 2008 due to severe dyspnea and low functional class she was admitted to the hospital where systolic pulmonary artery pressure was measured by transthoracic echocardiography for the first time: it was 112 mm Hg. Lung perfusion scintigraphy revealed multiple perfusion defects in both lungs. Following approved diagnostic algorithm, the diagnosis of CTEPH was revealed. Anticoagulation therapy by warfarin was prescribed immediately. From 2008 to 2015 the patient has taken therapy with warfarin and diuretic. In 2015 chest pain and discomfort on exertion, dyspnea at rest, legs and feet swelling appeared. By that time, due to weakness and severe dyspnea patient was confined to wheelchair. To clarify the diagnosis and choose therapy patient was referred to our PH department. 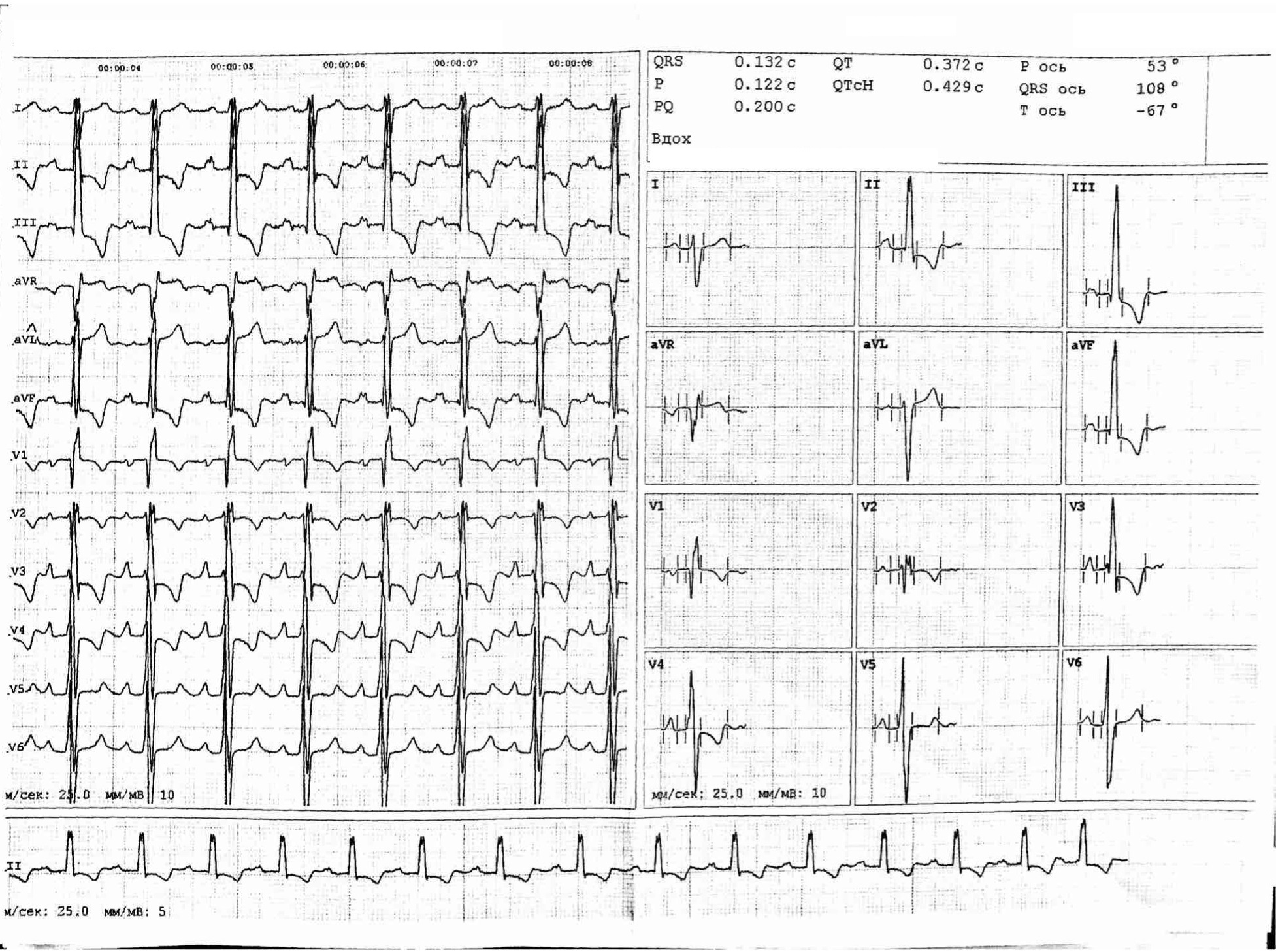 Having in mind LMCS (due to CT angiography findings and chest discomfort complains) and high probability of coronary artery disease, coronary angiography was performed.

The coronary angiography showed short LMCA with angiographic excentric subtotal stenosis. There were no atherosclerotic changes or stenosis of other coronary arteries. To evaluate the severity and structure of the stenosis we performed intravascular ultrasound (IVUS). It was shown that the ostium of LMCA was narrowed down to 9 mm2 without evidence of underlying atherosclerosis – it was enlarged PA trunk that compressed LMCA. This stenosis though was not hemodynamically significant and there were no indications for endovascular treatment (Figure 2).

Patient was discussed on “Heart Team” meeting, which included cardiologist, cardiac surgeon, interventional specialist and CT-specialist. Proximal lesions are indication for surgical operation – PTE, but due to high level of PVR, narrowing of the LMCA and poor physical condition the procedure mortality risk was too high. Prescribing PAH specific therapy was also risky as combined with LMCA compression it could lead to steal syndrome. The “Heart Team” decision was, despite predominantly proximal lesions, to start treatment with balloon pulmonary angioplasty.

Within 5 months 4 BPA sessions were performed, 10 segmental arteries of both lungs and the main lower lobe artery were successfully treated (Figure 3). Control RHC showed significant improvement in hemodynamic parameters: reduction of mPAP from 57 to 47 mm Hg and PVR from 1569 dyn/s/cm5 (20 WU) to 911 dyn/s/cm5 (7 WU). Coronary angiography did not reveal LMCA compression and IVUS showed that the luminal area of LMCA enlarged from 9 to 12mm (Figure 3). We also observed BNP level dropping from 1250 to 150 ng/dL. All changes correlated with improvement of functional status – patient was able to refuse wheelchair and started walking by herself. All this time therapy with warfarin and diuretics have been continued.

However, after 4 BPA sessions the patient still had PH (mPAP-47 mmHg). After final BPA session pulmonary angiography showed that in the upper lobes and in the left lower lobe proximal thrombotic masses remained. The PTE operation risk was reconsidered as low and the patient was transferred to the surgical unit for performing PTE.

The standard PTE for CTEPH using intermittent circulatory arrest under deep hypothermia was performed. The operation was successful. After the operation mPAP was 32 mmHg and PVR was 401 dyn/s/cm5 (5 WO) (Table 1). Transthoracic echocardiography was repeated: right atrium area was 4 sm2, right ventricle basal diameter was 3.1 sm and via apex view 4.6 sm, systolic PA pressure was 55 mmHg, TAPSE was 2.0 sm, IVC diameter was within normal limits, main PA was 3.7 sm.

The CT was repeated and showed improvement of perfusion in all operated areas (Figure 4) but left segmental artery C10 still had been occluded. After standard rehabilitation the patient functional status was dramatically improved, and she was discharged home.

Figure 4. Computer tomography before BPA (a), after all BPA sessions and after PTE C10 branch of left segmental artery is occlusived (c)

After 6 months she was admitted to our PH department for check-up. Patient’s functional status, transthoracic echocardiography, data of RHC had not revealed progression of the disease and there were still no indications for prescribing PAH therapy. Follow up is still continuing.

In 1957, Corday et al. first described LMCA compression by a dilated pulmonary artery in patients with PH [13]. There have been some reports regarding coronary artery compression by a dilated main pulmonary artery secondary to primary PH and congenital heart diseases, which may lead to sudden death due to malignant arrhythmia and left ventricular dysfunction [7]. The optimal management of LMCA compression in these patients is unknown because treatment of this condition is based on a limited number of case reports.

In 2001, Rich, et al reported the first two patients with PH whose extrinsic LMCA compression was treated by percutaneous insertion of an intracoronary stent [14]. Rich et al. believed that coronary angiography should be performed in all patients with PH presenting with effort angina or left ventricular dysfunction [14].

In our case LMCA compression due to IVUS data was not significant, thus there was no indication for stent implantation.

We recommend coronary angiography in every patient with CTEPH and any type of chest discomfort or dilatated pulmonary artery. If LMCA compression is not severe and endovascular treatment could be avoided all efforts should be directed towards reducing pulmonary pressure to decompress the LMCA. There are two options: PAH specific therapy and balloon pulmonary angioplasty. PAH therapy is not recommended because of possible steal syndrome. BPA is not contraindicated in patients with LMCA and is more preferable as it has demonstrated good hemodynamic results even after 2 sessions.

Here we for the first time report hybrid treatment strategy with BPA and PTE for patient with CTEPH, complicated by LMCA.

PH specialists treating patient with PH and chest pain have to be alert about LMCA compression syndrome. In our case BPA sessions significantly decrease mPAP and PVR leading to reversing LMCA compression and symptoms relief.

“Heart team” consecutive treatment strategy starting with BPA converted inoperable form of CTEPH to operable form and made it possible to perform PTE.

We conclude, that this strategy may be considered in patients with high PTE operation risk due to modifiable factors (high PVR, high mPAP, LMCA compression) or for patients with contraindications for PAH-therapy.