romj-2021-0421.pdf
Abstract:
Objective — To compare the mental component of the quality of life (QOL) in patients with stages 0-2 of knee osteoarthritis (OA) sensu Kellgren-Lawrence after treatment either with symptomatic slow-acting drugs for osteoarthritis (SYSADOA) and non-steroidal anti-inflammatory drugs (NSAIDs), or with SYSADOA, NSAIDs and orthovoltage radiotherapy (OVRT), in an open randomized study, using the SF-36 questionnaire. Material and Methods — The patients were randomly assigned to two groups: SYSADOA and SYSADOA+OVRT. Patients were asked to fill out the SF-36 questionnaire. The results were presented in the form of a mean of scores on each of four QOL survey sections for both groups at five time points: before and immediately after the treatment, at 6 months, 12 months and 36 months. Results — The groups were similar in their baselines characteristics (age, gender, body mass index [BMI], pain syndrome duration). Being initially equal, QOL improved by the end of treatment in both groups with statistically significantly greater improvement after OVRT. Further on, the QOL indicators in the OVRT group kept increasing, peaking at 12 months for social role functioning (SRF), emotional role functioning (ERF) and vitality (V), and at 36 months for mental health (MH). In contrast, the patients of SYSADOA/NSAIDs group were experiencing a decrease in their mental component over the analyzed period of time, and the levels of three out of four indicators at 36 months were even lower than their initial values. Conclusion — Adding OVRT to the standard SYSADOA/NSAIDs treatment for knee OA of stages 0-2 ensured improved mental well-being of patients for at least three years.
Keywords:
quality of life, osteoarthritis, knee joint, orthovoltage radiotherapy
Cite as:
Makarova MV, Valkov MYu, Kuznetsova LA. Mental well-being of patients with stages 0-2 of knee osteoarthritis after orthovoltage radiotherapy: open randomized trial evaluating quality of life. Russian Open Medical Journal 2021; 10: e0421.

Osteoarthritis (OA) is among the most common causes of chronic pain syndrome, functional impairment and, less often, of disability or premature loss of work capability, which has significant impact on the patient quality of life (QOL). Sensu WHO definition, the QOL is understood as a complex characteristic of the physical, psychological, emotional and social functioning of people, based on their subjective perception [1].

OA therapy is complex, but it is primarily aimed at relieving pain, which is the main factor affecting the physical and mental functioning of the OA patients. Age, body mass index, and stage of the disease constitute important determinants of the QOL mental component. The conventional therapy includes symptomatic slow-acting drugs for osteoarthritis (SYSADOA), which per se do reduce pain, and therefore they are commonly used in conjunction with non-steroidal anti-inflammatory drugs (NSAIDs) and acetaminophen [2, 3].

An alternative non-invasive method for treating OA is radiation therapy – specifically, orthovoltage radiotherapy (OVRT). However, OVRT is not listed in the Russian National Clinical Guidelines [2]. This approach proved being effective and safe in controlling OA-caused pain syndrome in several published studies; furthermore, the effect of OVRT lasts for several months and even years [4, 5]. Hence, in Germany, radiotherapy of degenerative inflammatory diseases is integrated into the treatment regimens for pain in OA, including OA of the knee joint [6].

Earlier, within the framework of a randomized study, OVRT demonstrated an advantage over conventionally used treatment procedures in terms of the degree and duration of pain reduction [5].

The objective of our study was to compare the mental component of the QOL in patients with stages 0-2 of knee OA sensu Kellgren-Lawrence after treatment with SYSADOA and NSAIDs, or with SYSADOA, NSAIDs and OVRT in an open randomized study, using the SF-36 questionnaire.

The Ethics Committee of the Northern State Medical University approved the study (protocol No. 10 of December 21, 2011). All patients signed an informed consent to participate in the study prior to treatment initiation.

The study involved patients treated for knee OA at five outpatient facilities in Arkhangelsk, Northwest Russia, including Regional Clinical Hospital, City Clinical Hospital No.1, Clinical Oncology Dispensary, and city polyclinics No.1 and 2. The patients were recruited between October of 2012 and October of 2014. The inclusion criteria were as follows: clinically confirmed OA of knee joints sensu criteria listed in Altman, et al. [8]; with or without laboratory and radiological manifestations; stages 0-2 of knee OA sensu Kellgren-Lawrence [9]; and an initial level of pain syndrome of over 30 mm on visual analog scale (VAS). Prior to the study, all patients underwent radiography of both knee joints in two standard projections, ultrasound examination, and magnetic resonance imaging of knee joints. The exclusion criteria were: post-traumatic OA; systemic connective tissue diseases; inflammatory joint diseases; knee replacement in anamnesis; acute stage of gastric ulcer and/or duodenal ulcer; severe liver and kidney disfunction; systemic and intra-articular therapy with corticosteroids throughout the last six months; acute coronary syndromes; acute cerebrovascular accident during the last year; chronic pain syndrome caused by other diseases, including cancer; pronounced functional disorders of the knee joint (inability to walk independently); and a patient’s unwillingness to participate in the study [5].

Patients were randomly assigned into two groups: SYSADOA (standard treatment) and SYSADOA+OVRT. Patients of both groups received a combined preparation of glucosamine (500 mg) and chondroitin (400 mg) sulfate: 1 capsule 3 times a day for 3 weeks; then from the fourth week on, 1 capsule 2 times a day for up to 12 weeks. After a break of 8 weeks, a repeated course in the same regimen was prescribed for 12 weeks. Patients of the SYSADOA+OVRT group additionally underwent orthovoltage radiotherapy for a total of 10 sessions 48 hours apart, with a total dose of 4.5 Gy.

Patients were asked to fill out a questionnaire on the QOL (SF-36). This questionnaire comprises 36 items grouped into eight sections [10]. The range of values for each section is 0-100, where 100 is indicative of the perfect health. Four of those (social role functioning [SRF], emotional role functioning [ERF], mental health [MH] and vitality [V] characterize the mental health component assessed in this analysis. The results were presented as a mean of scores for each of four sections for both groups at five time points: before and immediately after the treatment, at 6 months, 12 months and 36 months. To calculate the results for each of four sections, we used a validated assessment recommended by the International Center for Quality-of-Life Study in St. Petersburg, corrected for the population data on the residents of North-Western region of Russia [11].

To calculate the results for each of four survey sections, we used a validated assessment recommended by the International Center for the Study of QOL in St. Petersburg, taking into account population data for the residents of the Northwestern Federal District of Russia [8].

Individual values of QOL scores on four scales were considered continuous variables. Their comparison between the standard treatment group and OVRT group was carried out using the t-test for independent samples. Intragroup changes were analyzed using the t-test for dependent samples or non-parametric analogs. Differences were considered statistically significant at p<0.05. Statistical analyses were performed using the SPSS version 21.0 software.

The dynamics of the QOL mental indicators in patients with knee OA of stages 0-2 sensu the Kellgren-Lawrence scale before and after the treatment with SYSADOA medications alone, as well as in conjunction with OVRT, are presented in Figure 1. The data on the variance of point measurements for both groups are presented in Appendix 1. 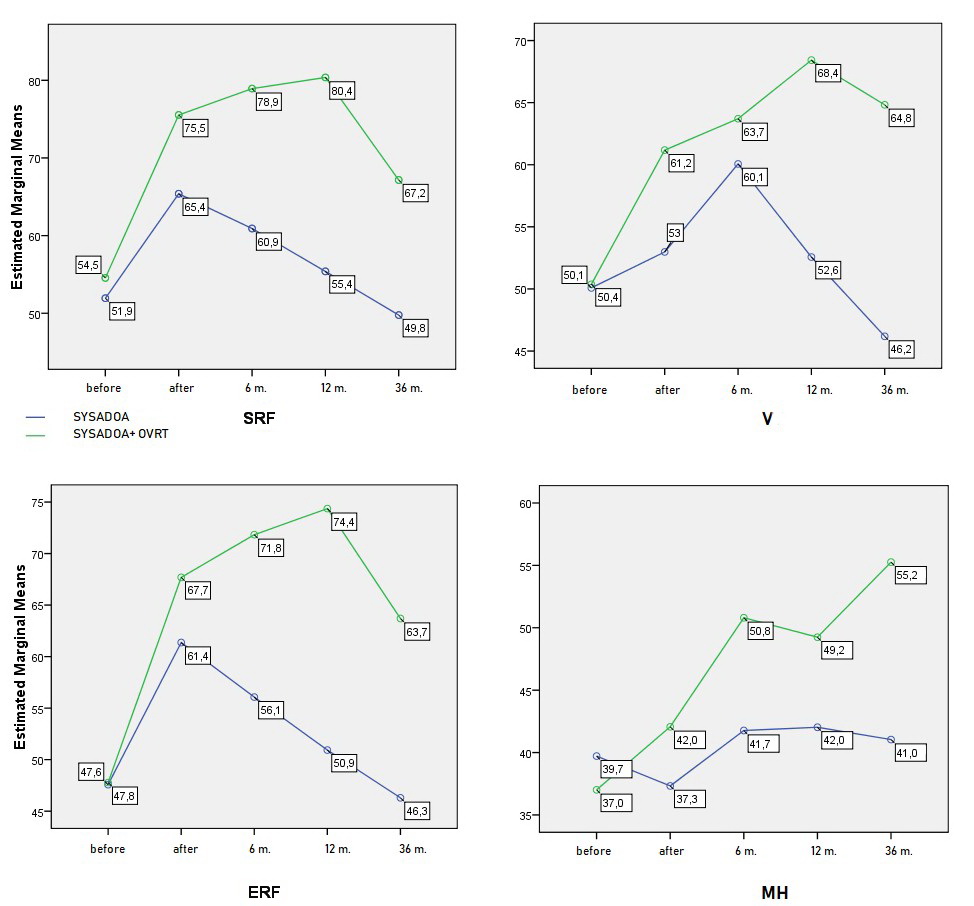 The characteristics of four QOL mental components after treatment with SYSADOA alone, or in conjunction with OVRT, were changing over time within treatment groups in a similar pattern. Being initially equal, or almost equal, the QOL improved by the end of treatment in both groups. Statistically significantly greater improvement was observed in case of the combination of SYSADOA with OVRT. Further on, the QOL indicators in the OVRT group kept increasing, peaking at 12 months for SRF, ERF and V, and at 36 months for MH. In contrast, the patients of SYSADOA/NSAIDs group were experiencing the reduction in the mental component over the analyzed period of time, and the levels of three out of four indicators were at 36 months even lower than their initial values. The intergroup point-by-point differences of the QOL mental component estimates at all time points after the treatment were highly statistically significant, favoring the OVRT group.

In this publication, we compared the assessment, completed within a framework of a randomized trial, of the QOL mental component in patients with stages 0-2 of knee OA after the conventional treatment with SYSADOA in conjunction with NSAIDs and/or acetaminophen versus a combination of these medications with use of OVRT on the affected joint. In continuity with previously published data on effective long-term reduction of pain syndrome level and on other characteristics of the knee joint function [5, 9], we demonstrated that an inclusion of OVRT leads to a significant improvement of the QOL mental component in patients.

Since such important factors as gender, age, radiological stage of the disease, and BMI, which can independently influence the outcome of treatment, were randomly distributed in the groups, this result could only be attributed to the treatment type impact on QOL.

This finding is not unexpected, because pain, being an important component of a patient’s mental well-being, is more reliably controlled via OVRT. In this respect, our results are consistent with the data of other authors [13, 14].

Still, the results of our study should be interpreted with caution because of a rather limited pool of subjects; some of the patients were excluded since they quit the study and underwent a surgery. However, the proportion of patients with progressive OA in the SYSADOA group was significantly higher, which accentuated the effectiveness of OVRT procedure [12]. Furthermore, the follow-up period of three years for a chronic disease may be way too short; hence, a longer follow-up period is required to assess the duration of OVRT effect. Longer monitoring would also facilitate further assessment of the safety of this approach.

Adding OVRT to the standard SYSADOA/NSAIDs treatment for knee OA of stages 0-2 ensured improved mental well-being of patients for at least three years. It is necessary to investigate the QOL in patients with OA of the knee joint for a longer period of time (5-10 years).

All procedures involved in human studies complied with ethical standards of the institutional and national research committees and 1964 Declaration of Helsinki and its later amendments, or comparable ethical standards.

Appendix 1. Dynamics of quality-of-life indicators in patients with stages 0-2 of knee osteoarthritis sensu Kellgren-Lawrence scale before and after the treatment with SYSADOA medications and their combination with OVRT