romj-2022-0201.pdf
Abstract:
Background — Although wearing masks is inevitable these days, the effects of wearing them on physiologic parameters have not been reported. This study aimed to assess the effects of wearing no mask, a three-layer standard surgical mask, and wearing an N95 mask on blood oxygen saturation, aerobic tolerance, and performance during exercise. Methods — Twenty-one participants were enrolled in the study. Each participant was monitored with electrocardiography (ECG) while performing an exercise tolerance test using the Bruce treadmill protocol. Testing was conducted three times on different dates. Participants did not use any mask in the first test but did wear surgical and N95 masks during the second and third tests respectively. Respiratory rate (RR) was assessed for 10 seconds and then multiplied by 6. Heart rate (HR) was monitored by ECG, and oxygen saturation levels were monitored (O2Sat) via digital pulse-oximetry. Assessments were done before warm-up, at the middle and end of each Bruce stage, and as well at 1, 2, and 5 minutes into recovery (masks were worn during recovery). Results — HR, RR, and O2Sat measured data were all significantly different between the three trials at end-stage 3 of Bruce treadmill protocol (p<0.05). Although HR was still higher through the recovery period in the N95 trial in comparison with other trials (p<0.05), RR and O2Sat measured data were not different in the recovery phase. Conclusion — HR, RR, O2Sat and exercise tolerance are significantly affected by wearing surgical and N95 masks.
Keywords:
respiratory protective devices, N95 respirators, COVID-19, exercise test
Cite as:
Hassabi M, Salehi S, Yekta AHA, Qutbi M, Hakakzadeh A, Esfahani MP, Otaghsara SMT, Shams SS, Parent-Nichols J. Effect of surgical and N95 facial masks on exercise tolerance, heart rate, respiratory rate and blood oxygen saturation. Russian Open Medical Journal 2022; 11: e0201.

COVID-19 pandemic initially required many social activities including sports and exercise-related activities be limited or avoided altogether [1]. As vaccines began to demonstrate their efficacy, strategies that allow safe returning to these activities have been implemented [2]. Social distancing and wearing masks are among the measures that have been most often emphasized since the beginning of the pandemic, however, these recommendations have met some resistance [3]. Such resistance may stem from concern about the harmful effects of mask-wearing, regardless of the lack of support from scientific evidence. Specifically, concerns about the potential for lower blood oxygen saturation while exercising using masks have been reported [3]. Although the specific purpose of N95 masks is to filter small airborne particles, research supports that surgical masks adequately prevent droplet transmission in individuals with or without COVID-19 symptoms [4, 5]. Concerning respiratory droplets, different forms of physical exertion lead to different levels of transmission. Surgical and N95 masks have been widely used by healthcare personnel. To date, the physiological impact of their use during exercise activitiesremains unknown. Therefore, this study aimed to compare the effects of wearing no mask, wearing a three-layer, standard surgical mask, and wearing an N95 mask on blood oxygen saturation, aerobic tolerance and performance during exercise.

Twenty-five male and female volunteers from the personnel of our medical center or their relatives were enrolled in this study. To be included in the study, participants had to be between the ages of 20 and 50 years. Exclusion criteria were histories of febrile or acute respiratory disease in two months before participation, chronic cardiorespiratory diseases, participants with contraindications or musculoskeletal limitations precluding maximal exercise testing and currently taking any medications that could affect heart rate such as beta-blockers and sympathomimetic drugs. Further, participants who reached workloads less than 9 METs at the first test, developed pathologic ECG changes or other indications for terminating test before reaching a maximal load, had poor distal capillary blood flow, contracted any acute respiratory or infectious disease, or were reluctant to continue their participation were excluded from subsequent testing. Following completion of a consent form, each participant was assigned three dates to perform an exercise tolerance test with treadmill Bruce protocol under ECG monitoring. An interval of at least 48 hours was scheduled between each test (Figure 1). 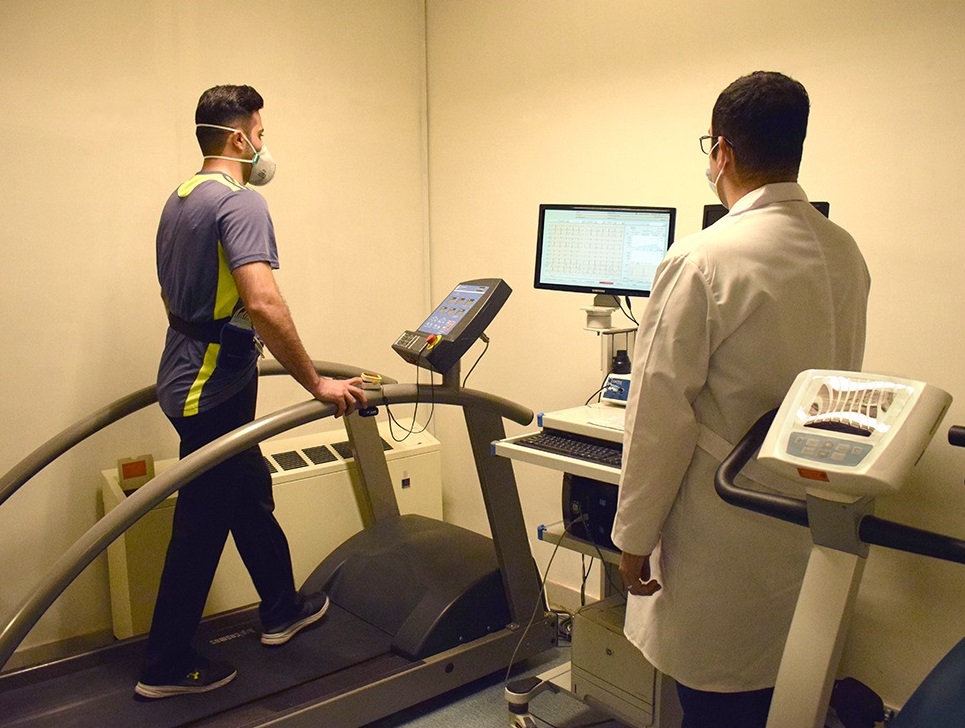 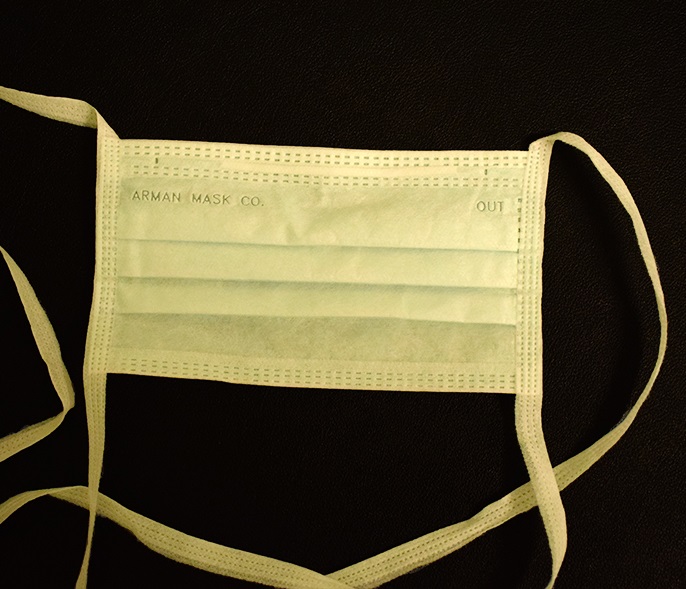 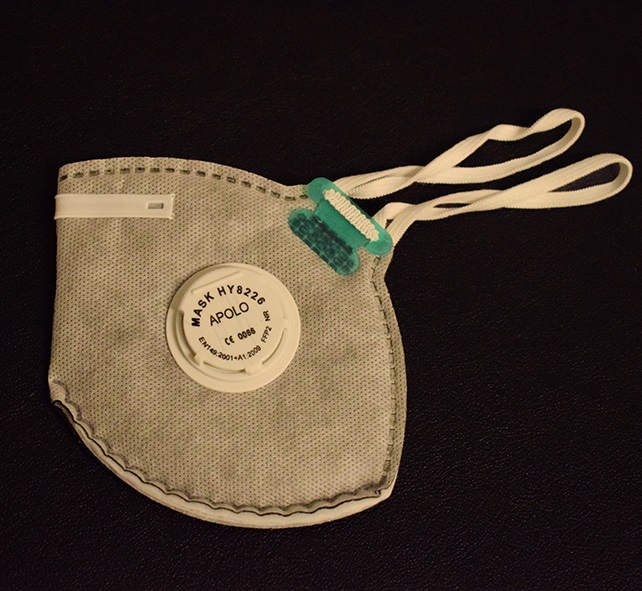 This study was supported and approved by Shahid Beheshti University of Medical Sciences (reference number: IR.SBMU.RETECH.REC. 1399.748). Participants completed 5 minutes of warm-up with zero slope treadmill at a speed of 3 km/hr. Criteria for test termination were fatigued due to maximal effort, a decrease in systolic blood pressure (BP) of 10 mm Hg with an increase in work rate, a decrease in systolic BP below the value obtained in the same position prior to testing when accompanied by other evidence of ischemia and presence of poor perfusion signs (cyanosis or pallor) or if technical difficulties monitoring the ECG or SBP occurred. Mean Respiratory rate (RR) was assessed for 10 seconds and multiplied by 6. Heart rate (HR)was assessed through ECG monitoring, and oxygen saturation O2Sat was assessed via digital pulse-oximetry. This data were recorded prior to the warm-up, at the middle and at the end of each Bruce stage, and at 1, 2, and 5 minutes during recovery. The last performed stage of the Bruce Protocol where the participant was able to complete at least one minute of work was identified as the maximally tolerated workload. The Borg Rating of Perceived Exertion (RPE) scale was used at the completion of each test [6].

Preparation for each test remained the same. The room temperature and humidity had been set at 20-22 ⁰c and 30% respectively [7]. Each participant was asked to wear the same clothing and not to drink any caffeinated beverages for the last 12 hours before each test. Prior to initiating any testing, participant’s body temperatures were measured and questions regarding potential signs and symptoms of respiratory infections were answered.

Results of within-subject effects of mask-wearing for all of the measured variables were assessed with a general linear model repeated measures Results are summarized in Table 2. A statistically significant difference was found in HR between three trials in end-stage 1 (p=0.043), mid-stage 2 (p=0.029), mid-stage 3 (p=0.011), end-stage 3 (p=0.002), mid-stage 4 (p=0.003), 1-min post-recovery (p=0.009), 2-min post-recovery (p=0.004), and 5-min post-recovery (p=0.000) during Bruce treadmill protocol (Table 3). Participants had a significantly higher HR in trials where a mask was worn. Wearing a three-layer mask produced higher heart rates than not wearing a mask and wearing an N95 mask produced higher HR than wearing a surgical mask (p<0.05).

Table 2. Study parameters, including heart rate (HR) in beats/min, arterial oxygen saturation (O2Sat) in percentages and respiratory rate (RR) in cycles/min in all phases of each trial. Warm-up (pre, mid, post), stages of exercise test (mid, end), recovery after test (during 5 minutes after completing the test)

Both oxygen saturation levels and respiratory rate were affected by mask wearing as well (Table 3). A statistically significant difference was found in mid-stage 2 and end-stage 3 according to within-subjects’ effects with O2Sat lowest in the N95 trial, followed by the surgical mask trial, and then the no mask trial. RR of participants differences in within-subject effects were statistically significant in end-stage 3 (p=0.031) and mid-stage 4 (p=0.024).

Table 4. The cause of termination of the exercise test in three trials

This clinical trial aimed to assess the effect of wearing a surgical or an FFP2/N95 masks on treadmill exercise test parameters. Effects of surgical masks and FFP2/N95 masks on exercise tolerance, HR, RR, O2Sat and Mets while completing the Bruce treadmill protocol were assessed through each stage of the exercise protocol and the recovery period. Both mask types had a marked statistically significant negative impact on exercise parameters such as HR and RR only during exercise and not recovery. N95 masks show consistently more pronounced negative effects compared to three-layer surgical masks. Both masks significantly reduced O2Sat at the end of stage 3. Values of partial Eta squared (η2) for end-stage 3 and mid-stage 4 are 0.34 and 0.48 which mean that 34% and 48% of the total variance can be accounted for or considered by trials. Furthermore, wearing the masks was perceived as more uncomfortable with a marked effect on Borg scale results in comparison with no mask used on a treadmill. Results of this study were in line with study of Fikenzer et al. in 2020. In that study, pulmonary function parameters (FEV1 and peak expiratory flow) were significantly lower with both surgical and N95 masks during exercise tests performed on a semi-recumbent ergometer [8]. In the study of Reberg et al. in 2012 respiratory rate was minimally increased with use of a surgical mask over 1 h at a low-moderate work rate. Heart rate was also increased by 8% with the use of a surgical mask at this work rate. However, participants in the Reberg et al. study did not demonstrate a significant difference in perceived exertion when using a mask during exercise, whereas participants in the present study did [3]. In another study by Roberg in 2010, ten healthcare workers were assessed with 1-hour treadmill walking sessions, at 1.7 miles/h, and at 2.5 miles/h, while wearing masks with an exhalation valve and without exhalation valve. There were no significant differences in the physiological variables according to using masks in their study [9]. In a systematic review of assessing the use of filtering facepiece respirators, such as N95 masks, during pregnancy in 2020 [10] they showed no significant increase in maternal heart rate, respiratory rate, oxygen saturation, and fetal heart rate between pregnant and not pregnant women using N95 FFRs for short durations of exercise. Although results of this review was different from our study, it is logical due to different study population of their study who were pregnant women. There are some limitations in our study that should be mentioned.

Results of this study cannot be extrapolated to patients with cardiopulmonary diseases but it was set to assess the effects of the masks in healthy individuals. Studies of related topics with larger sample sizes and on specific populations are needed in the future.

The results of this study demonstrated that HR, RR, O2Sat and exercise tolerance can be significantly affected by three-layer surgical masks and highly impaired by N95 masks in healthy individuals. These results are important for recommendations on wearing masks during physical exercise in Covid19 pandemic.

The author(s) declare no potential conflicts of interests with respect to the research, authorship, and/or publication of this article.

All procedures performed in this study were in accordance with the ethical standards of Shahid Beheshti University of Medical Sciences research ethical committee and with the 1964 Declaration of Helsinki (reference number: IR.SBMU.RETECH.REC. 1399.748).

This study was supported and approved by Shahid Beheshti University of Medical Sciences (reference number: IR.SBMU.RETECH.REC. 1399.748).