Features of iron metabolism in patients with HIV infection and pulmonary dissemination in tuberculosis and pneumonia: An exploratory case-control study

Respiratory diseases are currently most common in the structure of morbidity in the population of many countries. Disseminated lung diseases occupy a large share of those. Such diseases have a similar change in radiography albeit different etiology, pathogenesis, and treatment [1, 2]. HIV infection is among the causes of the increase in the number of patients with disseminations, including disseminated tuberculosis [3-5]. Patients with HIV infection have a higher risk of tuberculosis [6].

Investigating vital roles of microorganisms in recent years, many studies were dedicated to the importance of iron. A review of published sources over the past decade has revealed that some studies have demonstrated changes in iron metabolism in tuberculosis [13-15], while other studies identified the features of the anemic syndrome developing in tuberculosis patients [13, 14, 16]. The clinical significance of hepcidin as a marker of inflammation in community-acquired bacterial pneumonia was determined without specifying the causative agent of pneumonia [17]. A few studies presented the results of examining the concentration of iron and iron-binding proteins in the bronchial fluid of patients with Pneumocystis pneumonia [18] and showed that the level of serum ferritin was associated with its severity [19]. At the same time, in domestic and foreign publications, there are no data on the details of iron metabolism in disseminated pulmonary tuberculosis and pneumonia of various etiologies in patients with HIV infection in a comparative aspect, which suggests the relevance of this study.

An important feature of disseminated tuberculosis pathogenesis is the hematogenous spread of mycobacteria [20]. Iron is among the most important substances in the life of mycobacteria. Also, iron belongs to the essential trace elements for humans [21-24]. Mycobacterium tuberculosis employs several mechanisms for obtaining iron. First, with the help of iron-chelating microbial siderophores; second, from iron-containing enzymes. This method is not typical for most microorganisms [21, 24, 25]. Tuberculosis patients may develop iron metabolism disorders in the form of a combination of anemia of chronic disease and iron deficiency anemia. Iron deficiency in anemia of chronic disease is relative in contrast to iron deficiency anemia [21, 24]. Transferrin and its receptors, ferritin, ferroportin, ferroxidases and hepcidin are the most important substances in human iron metabolism [16, 23, 26]. Hepcidin synthesis is regulated by both increased content of free iron and the infectious process. Lipopolysaccharide macromolecules of bacterial cells act on macrophages, induce the interleukin-6 production, which stimulates the production of hepcidin [16, 27]. The study by Hella, Cercamondi, Mhimbira, et al. (2018) demonstrated that hepcidin was associated with the severity of tuberculosis and the development of active tuberculosis, but not with HIV co-infection or helminths. It was also established that viruses of hepatitis B and C had almost no effect on hepcidin homeostasis [14].

The relevance of our study is suggested by the need to optimize the differential diagnosis of pneumonia vs. tuberculosis in patients with HIV infection and pulmonary dissemination, and by insufficient comparative laboratory data on the features of iron metabolism in such patients.

We searched eLIBRARY.RU (Russian electronic scientific library) and PubMed using the following keywords: disseminated tuberculosis, pneumonia, HIV infection, iron metabolism and hepcidin. Our search covered the studies published in 2010-2020, with no language restrictions. Most studies demonstrated the role of hepcidin as a marker of inflammation. Hepcidin is also known to increase in bacterial pneumonia similar to inflammatory process. We identified published studies on iron metabolism in patients with tuberculosis and pneumonia, but without comparative data on the characteristics of iron metabolism in patients with HIV infection and pulmonary dissemination.

The goal of our study was to identify the peculiarities of iron metabolism in patients with HIV infection and pulmonary dissemination in tuberculosis vs. pneumonia.

This study was an exploratory, single-center case-control research conducted at Samara City Pulmonary Center. The study was approved by the Bioethics Committee at Samara State Medical University. For this type of study, formal consent was not required. Patients were eligible for recruitment if they were over 18 years, HIV positive and had pulmonary dissemination on radiographs. We excluded patients who received iron supplements less than 10 days prior to the study. The gender, age and race of patients did not matter. Subjects in Group 1 (cases; 42 patients) had a confirmed diagnosis of tuberculosis. Subjects in Group 2 had pneumonia (controls; 44 patients). All patients were counseled by a psychiatrist. Standard tuberculosis diagnostic procedure was carried out. During the first two days, a skin test with tuberculosis recombinant allergen (Diaskintest) was performed. Ziehl-Neelsen sputum smear microscopy (of the morning sputum portion) was performed three times. If it was negative, fiberoptic bronchoscopy and Ziehl-Neelsen microscopy of bronchoalveolar lavage were also performed. GeneXpert MTB/RIF assay and BACTEC MGIT test were carried out as well. The terms for diagnosing tuberculosis ranged from 3 to 21 days (mean: 14±5.3 days). Ziehl-Neelsen sputum microscopy detected M. tuberculosis in 9.5% of cases (4/42 – i.e., 4 patients of 42). Microscopy of bronchoalveolar lavage fluid detected M. tuberculosis in 15.5% of cases (6/38). GeneXpert MTB/RIF demonstrated 100% diagnostic result (36/36). It was further supported by the BACTEC MGIT test result (Table 1).

Characteristics of social status, clinical manifestations, and examination results of both groups were analyzed. The parameters of the complete blood count test were assessed. Additionally, the indicators of iron metabolism were identified in blood serum (hepcidin, ferritin, and iron concentration).

The collection of blood serum was conducted no later than three days before admission to the pulmonary department. Serum was collected in Eppendorf tubes and stored at -20 °C until the analytical examination. The samples were defrosted at the temperature of 23-25 °C before testing. Repeated freezing of the samples was not permitted. Samples with hemolysis and lipemia were excluded from the study. We collected a total of 42 serum samples from the patients with tuberculosis and 44 samples from the subjects with pneumonia. The determination of the of Iron and ferritin concentrations were determined on Cobas Integra 400+ automatic biochemical analyzer (Roche-Diagnostics, Switzerland), using commercially available reagent kits (Roche-Diagnostics, Switzerland). Hepcidin concentrations were determined via ELISA, using the ELISA Kit for Hepcidin (China) on Lazurit automatic analyzer (Vector-Best, Russia).

Statistical data processing was carried out using MedCalc 19.2.6 statistical software. The Shapiro-Wilk test was employed to assess the distributions of parameter values. Normally distributed parameters are presented as arithmetic mean and standard deviation, M ± σ. Parameters with distributions other than normal are presented as median and interquartile range, Me (Q1-Q3). The statistical significance of intergroup differences was assessed using the Student’s t-test or Mann-Whitney test, depending on the distribution. Differences between groups were considered statistically significant at p<0.05 (exact p-values are indicated in parentheses). ROC curves were drawn to graphically display the values of investigated parameters, and areas under the curve (ROC AUC) were calculated for quantitative interpretation of the curves. Multivariate logistic regression analysis with subsequent logit transformation was performed to estimate the probability of tuberculosis in patients with HIV infection and dissemination syndrome. We developed a diagnostic model. Regression equations with various combinations of independent variables were compiled. The dependent variable was binary (presence or absence of tuberculosis). A stepwise regression for independent variables (regressors, or predictors, of tuberculosis) was chosen: P<0.05 was considered statistically significant.

Clinical and social characteristics of the patients were analyzed. We revealed that patients in both groups were affected by negative social factors equally often (Table 2).

The logistic regression equation is:

where: Y is a dependent binary variable, a is a constant (represented by an intercept of the estimate line), b1-n denotes regression coefficients, x1-n denotes predictors (regressors), e is an exponent (e=2.7182=const), P designates the probability.

Hence, the obtained model is as follows:

where: P is the probability of tuberculosis; X1 is hepcidin level; X2 is iron concentration; X3 is WBC count; X4 is RBC count; X5 is CD4+ T-cell count.

The coefficient of determination, R2=0.7736, implies high goodness of fit of the regression model. The method of ROC analysis was employed to determine the numerical value of the reliability of the difference between the information content of used methods. For this purpose, the area under the curve (AUC) was calculated; AUC=0.958 in our model. This corresponds to high information content (Figure 1). 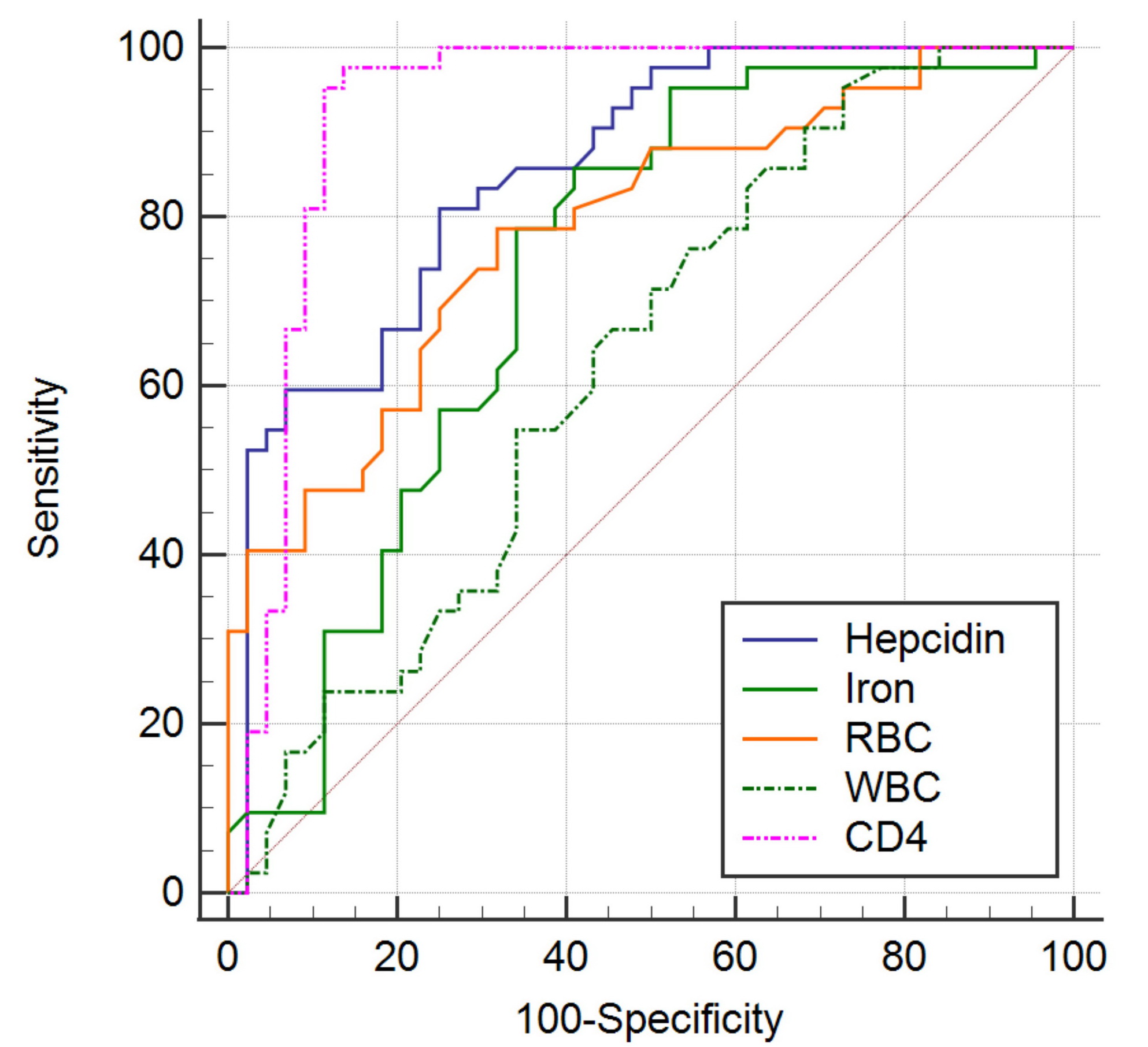 Figure 1. ROС curves of iron concentration, hepcidin level, RBC count, WBC count, CD4+ T-cell count. The sensitivity of the method is 92.86% and the specificity is 90.91%. The percentage of correctly classified cases is 91.86%. The area under the curves is 0.958 in this model.

There are difficulties in the differential diagnosis of pneumonia vs. tuberculosis when examining patients with HIV infection and pulmonary dissemination syndrome. It is crucial to consider an absence of specific symptoms, along with taking into account the results of physical examinations; furthermore, it is imperative to suspect tuberculosis in such patients.

There is evidence of a high hepcidin level in patients with disseminated tuberculosis [13]. It is recognized that an increase in hepcidin content occurs in pneumonia as well [29, 30]. However, we did not come across studies, in which hepcidin was investigated as a potential marker for the differential diagnosis of pneumonia vs. tuberculosis. In our research, we planned to examine hepcidin and other indicators of iron metabolism in a comparative aspect in disseminated tuberculosis vs. pneumonia.

We studied two groups of patients with HIV and dissemination on radiographs (cases: patients with tuberculosis; controls: patients with pneumonia). We established differences in the parameters of iron metabolism. Hepcidin and hemoglobin levels were statistically significantly higher (p<0.001), while iron concentration was lower (p=0.0002), in tuberculosis. Also, there were statistically significant differences between groups in terms of CD4+ T-cell count, viral load, RBC and WBC counts sensu the results of complete blood count tests. Other significant differences included duration of complaints prior to hospital admission, and job stability.

Also, we identified quantitative parameters with the highest statistical significance (iron concentration, hepcidin level, RBC count, WBC count, CD4+ T-cell count) and developed a formula for calculating the probability of tuberculosis. This mathematical model could be used as a supplementary technique for assessing the probability of tuberculosis in patients with HIV infection and pulmonary dissemination in case of negative results, yielded by bacterioscopic and immunological diagnostic tests, with persisting suspicion of tuberculosis, based on clinical evidence.

This study has a number of limitations. First, it is a cross-sectional case-control study. Patients were preassigned to either a group of cases or a group of controls. In future studies, it would be necessary to conduct a cohort study on iron metabolism parameters and observe patients during the whole period from detection of disseminated lung disease to verification of the diagnosis. Second, this was a single-center study with a small number of observations. It did not take into account climatic and geographical features. Consequently, the obtained formula for calculating the probability of tuberculosis is solely a mathematical model, thereby requiring further studies.

It is necessary, first of all, to suspect tuberculosis, when examining a patient with HIV infection and pulmonary dissemination syndrome. Differential diagnosis of tuberculosis in such patients is difficult, because there are no specific complaints, symptoms, examination results or radiological data. An iron-regulating peptide hormone hepcidin is of great practical importance for further study as a potential marker for the diagnosis of tuberculosis.