romj-2020-0103.pdf
Abstract:
Introduction — Burning is one of the most accidents with a higher rate of morbidity and mortality. The aim of this study was to investigate the status of nursing cares in the burning ward to improve the quality of nursing service following the education. Methods — An after-before intervention-educational audit study was conducted on burning ward nurses in Iran. The data were collected using a researcher-made checklist based on the Ministry of Health standards with “Yes/No” questions. The data were analyzed using SPSS software version.16 through descriptive statistics and Mc-Nemar nonparametric metric test. Results — The population consisted of 20 nurses working in the burning ward of the Sina Hospital in Tabriz/Iran. Presentation of nursing services was good in terms of the primary care (80.5%) and during hospitalization (83.4%); and it was weak in terms of the secondary care (42.5%). A significant improvement was observed following the educational intervention according to the results of the Mc-Nemar test performed before and after intervention (P<0.001). Conclusion — Audit education improved the nursing secondary cares and follow- up care after patients discharge. It is necessary to hold educational workshops for improving the nurses̓ performance in the other fields.
Keywords:
education, burn, nursing, audit
Cite as:
Hazrati H, Vahedi L, Shirzadc F, Khanderoy R. Effectiveness of the educational interventions on improvement of the performance of burning ward nurses. Russian Open Medical Journal 2020; 9: e0103.

Burring is one of the common problems, especially in the developing countries followed by the traffic incident and trauma across the world [1]. It has unpleasant effect on the person body and soul. Mortality, inability, pain, physical, mental and economic problems were considered as the effects caused by the burning [2-4]. Providing high quality caring is the right of the patient that depends to the proper management and caring [5]. The results of studies have shown the reduction of the costs related to the effective medical care [6]. Meanwhile, the nurses play an important role in this regard [7, 8]. The nurses who provide care services for the burn patients should obtain adequate knowledge on the physiologic effects after caused burning and possess the rapid analysis and decision-making on trivial changes occurred in the patient status [7]. The beginning of the rehabilitation could establish compassionate and sympathetic relationship with the patients and their families [7, 8]. The audit cycle is a quality improvement intervention used to decrease evidence-practice gaps [9]. Therefore, an educational intervention for purposeful teaching following identified needs seems essential in order to fill the skill gap [7, 8].

The aim of this study was to improve the nurses’ performance on educational auditing of the burning ward and providing the appropriate training for nurses with weaker performance using educational intervention.

This before-after study was an interventional research with approach to educational audit based on educational audit cycle [10]. This study was conducted at the burning ward of the Educational and Treatment Sina Hospital as a governmental, specialized, and referral hospital in Tabriz/Iran over one-year.

The nurses’ performance during nursing service was investigated according to the author-made checklist based on the standards of the Health Ministry. The checklists were consisted of two-section, including the demographic information and the standards of the nursing ward, and three sub-groups, including 6 questions on the triage and primary care (Scope 1), 15 questions on care service during hospitalization (Scope 2) and 6 questions on rehabilitation, consulting and fallow up (Scope 3) (Appendix 1). The content validity and face validity were confirmed by 10 experts in the burning ward.

The external evaluators assessed the caring of patients during hospitalization using yes/no checklists, including 27 items in a single-blinded study perception without awareness of the nurses. Of notes, the external evaluators were expert in nursing service at the burning ward and familiar with how to the completing of checklists.

Regarding to the caring of five patients by each nurse, the performance of the 20 nurses on 100 patients was assessed. 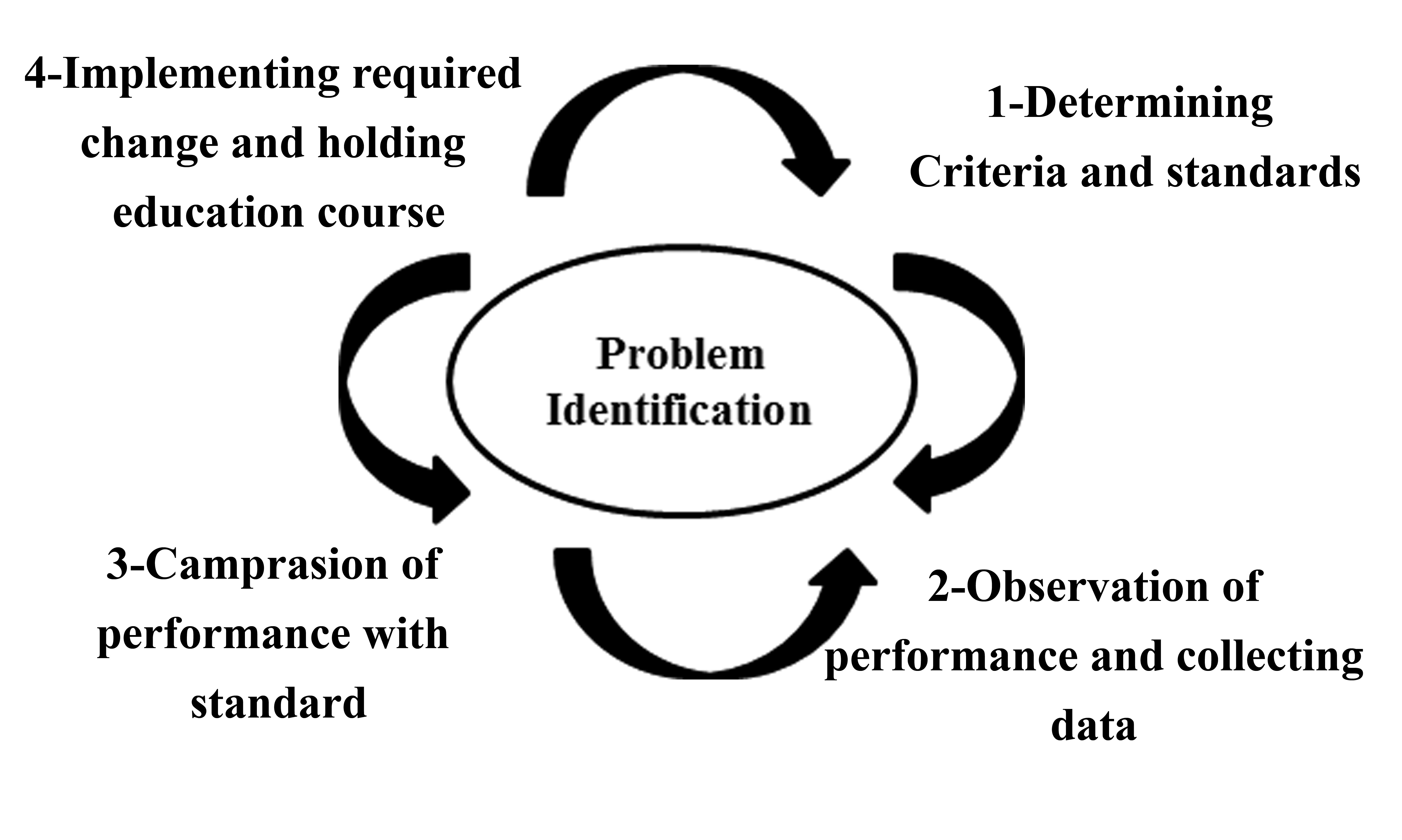 After 45 days, the nurses’ performance were assessed according to the primary checklist, again. The results of the after-before intervention were compared using Mc-Nemar nonparametric test.

The statistical population consisted of 20 nurses working in the burning ward of the Sina Teaching and Treatment Hospital which is a governmental, specialized, and referral hospital in Tabriz/Iran that has three sections including men, women and children that each section includes 14 beds with 20 nurs 16 female (80%) and 4 male (20%(.

In general, the criteria including scope 1 (triage and primary care), scope 2 (care service during hospitalization), and scope 3 (rehabilitation, consulting and fallow up) were considered approximately 80.5%, 83.46% and 42.5%, respectively (Figure 2). 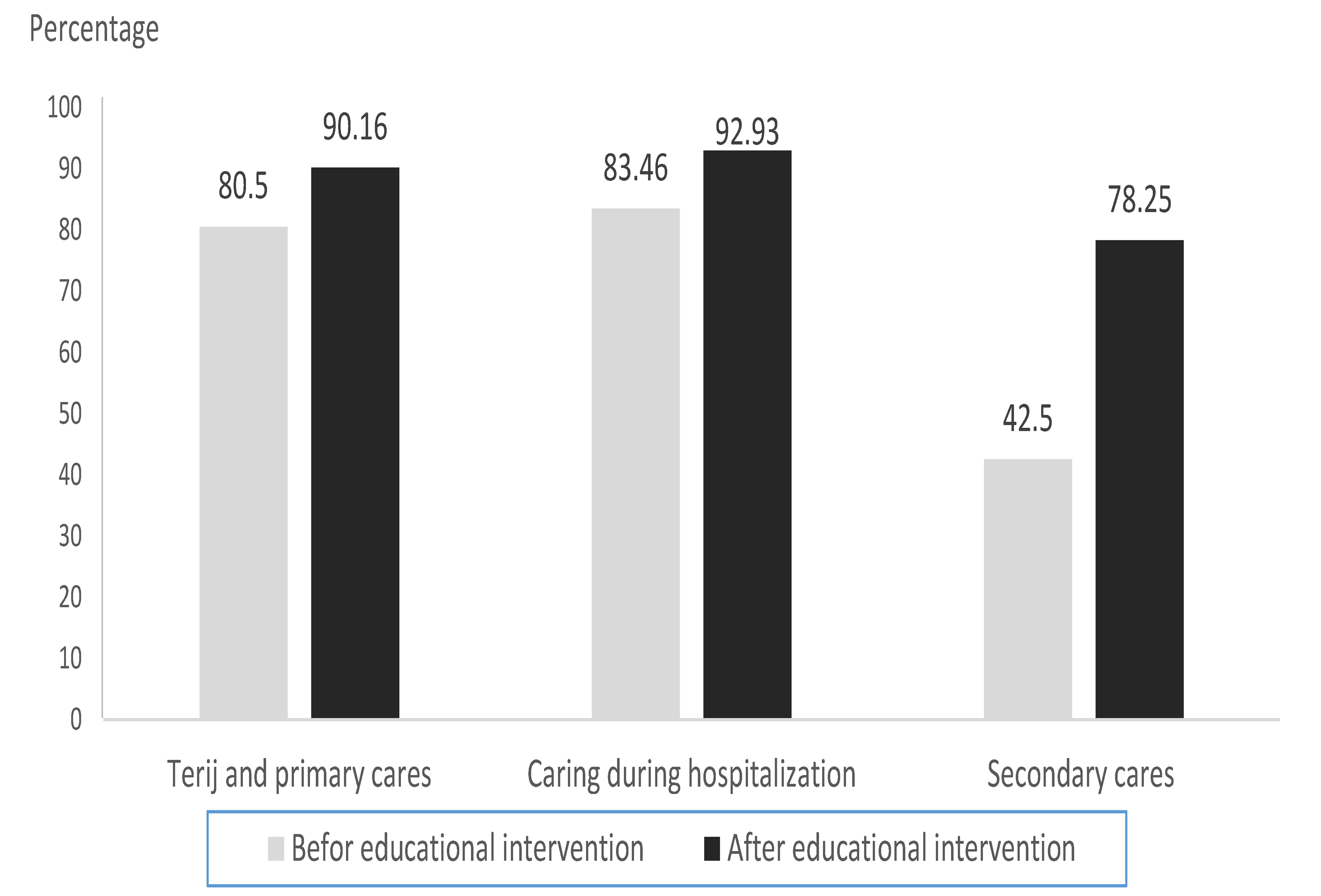 Fugure 2. The nursing ward caring before and after educational intervention in three scopes of primary, during hospitalization and secondary cares in Tabriz Sina Burning Ward.

The results of the primary investigation on care services providing by the nurses showed that in the scope 1(triage and primary care), the highest and lowest considered criteria were related to the control of living signs and the evaluation of the urine system, respectively (Table 1).

Table 1. Comparison standards before and after educational in Tabriz Sina Hospital Burning Ward

In the scope 2 (caring during hospitalization), the highest and lowest considered criteria were associated with the evaluation of the coronary system for liquid therapy, assessment of the wound and wound bandage, removing the dead layers of the skin and biopsy of the wound and excretions; and determining the pain level by measurement tool for using pain relief methods, respectively (Table 1).

In the scope 3 (secondary cares), the highest and lowest considered criteria were related to the assessment of the mental-psychological status regarding the imagination of persons̓ about his /her future face and consulting with the patient and family for self-caring (physiotherapy, bandage exchange, starting of activity, adhere to diet and the proper medicine and return to natural life), respectively (Table 1).

In comparison of the scopes, the highest amount of the improvement regarding the quality care of nursing was related to the scope 3, while all three scopes were improved after the intervention (Figure 2).

In the scope 1, the criteria related to the evaluation of the urine system, as the lowest criteria, was increased by 8% after the intervention (Table 1).

In the scope 2, the criteria related to determining the pain level by measurement tool for using pain relief methods, as the lowest criteria, was increased by 40% after the intervention (Table 1).

In the scope 3, the criteria related to consulting with the patient and family for self-caring (physiotherapy, bandage exchange, starting of activity, adhere to diet and the proper medicine and return to natural life), as the lowest criteria, was improved by 50% after the intervention (Table 1).

We investigated the educational intervention using Mc-Nemar nonparametric test (305.6). The results showed that there is a significant relationship in terms of the nurses̓ performance pre- intervention and post-intervention (P<0.001) and 398 cases were observed found that they were not observed before intervention (Table 2).

Table 2: Educational intervention effects by observing the standards of the burning ward according to the Mc-Nemar test

In this research we investigated the effect of the educational programs on improving the quality of nursing care in burning ward before and after intervention. In the first scope the lowest attention was related to the control of the inhalation caused in the burn injuries and the evaluation of the patient urinary system and in the second scope, the lowest attention was related to the determination of the level of pain by the tools. The measuring of pain level is very important for hospitalized patients; however, burn patients had experienced severe pain during wound bandage and treatment. Severe pain caused by burning is accompanied by affective responses, severe anxiety and acute stress disorders [10]. Therefore, measuring the pain level and applying pain relief options is required for the burn patients [10]. This function has improved following interventional programs in 85% of cases. Attention to the wound and wound culturing is one of the notable subjects that must be performed before the beginning of antibiotic treatments [11]. The prescription of antibiotics without wound culturing leads to unpleasant effects and delay in the treatment [12]. Mograbazar et al. in a study conducted in Birjand observed that wound culturing has been not done in 98% of subjects [13]. Investigations have demonstrated that 75% of deaths occur due to infection caused after burning [14]. In addition, they observed that the start of antibiotics without antibiogram [13] leads to the drug resistance and the increase in the infection [15]. In current study, the wound culturing and antibiogram have been improved during post-intervention.

The results showed a poor performance of the nurses in secondary care, including, a low attention to the collaboration with rehabilitation team and offering the consultation to the patients and their families on self-caring. Udo C et al. showed the interest of nurses to medical and physical aspects without considering the emotional needs of the patients and their families due to ignoring them as tasks [16].

Presenting the essential trainings and enhancing the patients’ awareness prevent from the secondary side effects resulted from the lack of awareness on wound bandage, physiotherapy, and improving the nutrition. Because of the lack of awareness, infection, scar, deformation, pain and deviation in movement are observed [17]. Affective support of these patients plays an important role in reduction of anxiety [18]. Several reports have mentioned the wound bandage and rehabilitation services as families’ major concerns [19]. In a research conducted by Halajizadeh et al. in Iran, the least score was associated with a perfect offering of consulting and teaching for the patients [20]. Chan JNH et al. have obtained the similar results [21]. In a study by Negarand R et al. the poor educational programs offered to the patient by the staffs has been reported [22]. It seems that the reason for a lower attention to the secondary care is due to the shortage in the number of nurses, lack of training for nurses at the onset of employment, lack of management of the nurses by the heads or supervisors during patient care services, Job dissatisfaction and the overwhelming attention of nurses to special cares in these wards [23]. However, the burn patients need for special and several cares over hospitalization and at home [24] so, it is necessary to consider the number of nurses relative to the hospital beds, and the difficulty of their work in burning wards, receiving important trainings on physical and psychomotor problems [25].

The educational audit to burning ward nurses was an effective function in improving the nurses’ performance. Despite receiving the necessary skills over academic courses, sometimes the nurses will be inefficient in their duties due to a high load of jobs or a lack of updating regarding the nursing knowledge that influence on the three scopes, including the primary care, during hospitalization and secondary care. Evaluation and audit by emphasizing on all caring and educational indicators can be effective in improving the nurses' performances and the presentation of nursing services. It is suggested to investigate the burn patients in the follow -up at home after-before the presentation of educational programs to nurses as well as comparing the burning effects.

This study has been approved by the Ethics Committee of the uni­versity (No IR.Tbzmed.rec.1392.247). Ethical subjects were considered. The questionnaires were kept confidential and no names were mentioned in them. The evaluation of the nurses' performance, completion of the checklist and holding the educational programs have been done with via coordination and supervisor.

We would like to thank the manager and supervisors Sina’s Hospital of Tabriz Universities of Medical Sciences in Iran.