Variability of adult cerebrum mass of the Saratov-city residents

One of the oldest questions of neuro-morphology, physiology and psychiatry is the question of cerebrum mass variation [1-7, etc.]. A human has no other organ like a cerebrum which mass, out of pathological process, would deviate widely from this or that side. The widespread lifetime methods of cerebrum research have caused the necessity to specify the variation range of its mass, i.e. of anatomical rate of people who do not suffer from cerebrum diseases and mental disorder.

The data received were analysed by variation-statistical method with the usage of the group of applied programs "Statistica 6.0" soft and Microsoft Excel Windows-XP. For all the parameters there had been determined: the minimum and maximum values (min-max), the mean (M), error of the mean (m), standard deviation (SD), the coefficient of variation (CV). All variables were preliminary checked out for the presence of the "jumping-out" variables. The authenticity of differences between the variables' series was determined by the Student’s t-test. The differences were considered valid at the 95% of probability (P<0.05). To study an individual variability the M±0,67SD range was taken as an average quantity. 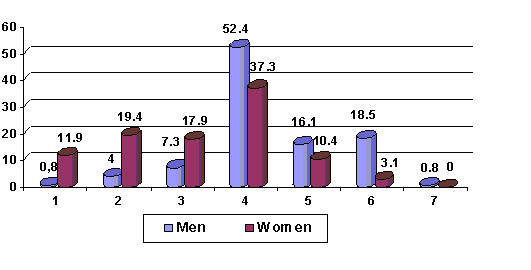 The cerebrum mass study experiments have been organized many times. Thus, A.A. Yurgutis (1957) [6] studied the cerebrum mass variability at a young, middle, and elderly age. According to his data the minimum cerebrum mass of an adult is 1020 g, the maximum is 1776 g. As follows from our material, the minimum and maximum mass is lower than the given figures, and is ranging from 960 g to 1670 g. Cerebrum mass at all ages is less at women than at men, and after the age of 50 years the decrease in cerebrum mass of both genders takes place, which is proved by our data as well.