Dopaminergic neurons of the midbrain are the main source of dopamine (DA) in the mammalian central nervous system. Dopamine is a chemical messanger active in  Mesolimbic and Mesocortical reward pathways [1]. Dopamine is manufactured in nerve cell bodies in the Ventral Tegmental area (VTA) and is released in the Striatum, Nucleus  Accumbens and the Prefrontal  Cortex. Motor functions are linked within cell bodies in the substantia nigra which manufacture and release dopamine into the striatum. In the brain, dopamine plays an important role in the regulation of reward and movement [2]. As tyrosine hydroxylase catalyzes the formation of L-DOPA, the rate-limiting step in the biosynthesis of dopamine, tyrosine hydroxylase-deficiency causes important clinical symptoms. Several important diseases of the nervous system are associated with dysfunctions of the dopamine system [3]. The objective of this study was to compare  dopaminergic neurons of Substantia Nigra and level of tyrosine hydroxylase (TH) in the striatum, pre-frontal cortex (PFC) and nucleus accumbens (NAc) of D-amphetamine(D-AMPH) treated Wistar rats.

Experimental groups of 6 Wistar rats were injected subcutaneously with amphetamine 10 mg/kg body weight daily for 7 days while the controls groups (6 Wistar rats) were injected with normal saline in the same dose. On day 7 both the groups were deeply anesthetized with (40 mg/kg i.p.) sodium pentobarbital. Tissue perfusion and fixation was done transcardially with 4% paraformaldehyde in 0.1 sodium phosphate buffer (PBS), PH 7.4.  Frozen coronal brain sections (25 µm thick) containing the Substantia Nigra and the Ventral Tegmental Area (VTA) was done with cryostat followed by Immunohistochemical (IHC) stainings and visualized under light microscope. Homogenized Nigral tissue in RIPA (Radio-Immuno-Precipitation Assay) buffer was centrifuged to remove debris and the supernatants were collected and run to sodium dodecyl sulphate-polyacrylamide gel electrophoresis (SDS-PAGE). The protein bands were transfered to nitrocellulose membrane. The band was quantified by measuring the density of each band using densitometer with scion imaging program.

One way-ANOVA test and Post-hoc tests was applied to see the level of significance. All the data were normalized to the levels of actin expression in the same sample.

Degeneration of dopaminergic neurons and damaged synaptic connection in substantia nigra, was observed leading to reduction of stratial dopamine levels in amphetamine treated group. Decreased level of tyrosine hydroxylase was present in striatum (65.6%), nucleus accumbens (55.0%) and pre-frontal cortex (71.8%). The expression of percentage of tyrosine hydroxylase in all these 3 areas were highly significant (p<0.001) also the mean difference of Tyrosine hydroxylase between Striatum, Nucleus accumbens and Prefrontal cortex was reduced (p<0.001) (Post- Hoc Test). D-AMPH affects the neuronal cell morphology and decreases expression level of TH. 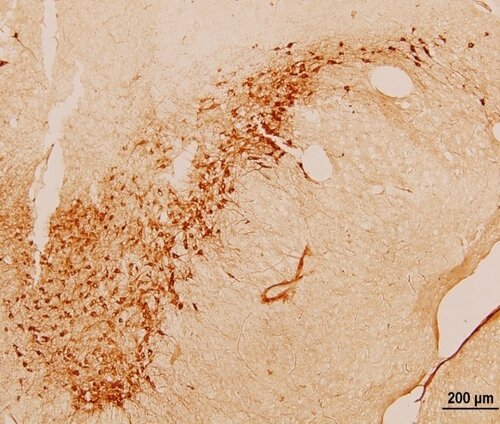 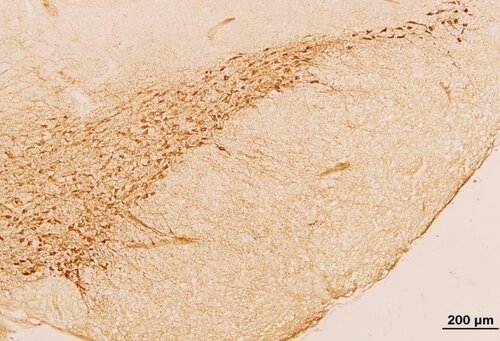 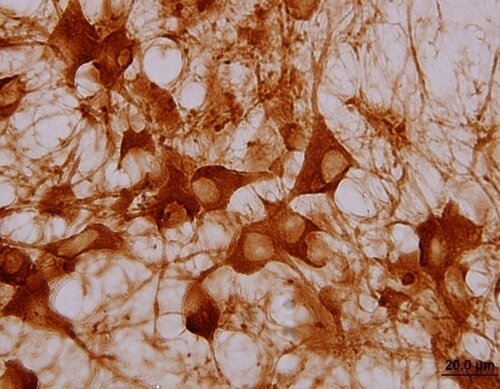 To all the lab members who supported during the research activities.