romj-2013-0304.pdf
Abstract:
The aim of the study is a comparative analysis of the effect of melatonin (Melaxen) and 3-hydroxypyridine (Mexidol) on antitumor and antimetastatic influence of chemoradiotherapy and oxidative status at mice with Lewis lung carcinoma. Material — Experiments have been organized on 95 mice of C57Bl/6 line and of 20–22 g in weight. Cyclophosphan has been abdominally administered two times in a dosage of 60 mg/kg within the interval of 120 hours — 20-30 min before radiotherapy. It has been located on the area of initial tumor in a dosage of 2 g at the same time as cyclophosphan injection. Melaxen and Mexidol have been intramuscularly injecting in the dosage of 45 and 50 mg/ kg for 14 days. Antitumor and antimetastatic effect of the applied therapy and changes in the oxidative status of the animals have been estimated. Results — Melaxen and Mexidol do not decrease antitumour and antimetastatic effects of radiotherapy and prevent the activation of free radical processes at animals with tumors. Mexidol was more effective than Melaxen in correction of superoxide dismutase activity in liver. The drugs under the study do not decrease radiotherapy-induced lipid peroxidation in the initial tumor. Conclusion — Melaxen and Mexidol do not decrease the radio therapy efficiency and oxidative status at mice with tumor (on the background of antitumor treatment).
Keywords:
Melaxen, Mexidol, radiotherapy, oxidative status
Cite as:
Siprov AV, Vashurkina IM, Masyagin VA. Comparative evaluation of antioxidant drug influence on a radio therapy efficiency and oxidative status in mice. Russian Open Medical Journal 2013; 2: 0304.

Chemo- and radiotherapy still keep being a major method in cancer treatment. However, evident toxic complications development limits maximum efficiency achievement. Extemporaneous gaps in treatment aggravate afterhistory of an anticancer therapy [1]. There different methods have been developed, which facilitate the realization of a maximum activity of the cytoreductive treatment usage in a clinic. The methods are organized in different directions including the         reduction of the toxicity by antitoxic modifiers usage. A supportive care has firmly established itself in clinical oncology. It allows reducing the degree of severe complications, but not just prevent or reduce the drug- and radiotherapy     unwanted sequela caused by advanced oncological disease [2]. No less important is the fact that during the cancer progress there are changes of antioxidant status indices. This can influence tissues and organs. According to the medicine literature data peroxidation plays an important role in cancer emergence and progress [3-5]. Taking into account pathogenetic value of oxidative reactions in cancer process and antitumor treatment complications [6, 7], there is a study of the antioxidant drugs efficiency. There were chosen the drugs with different mechanisms and influences on lipid peroxidation as antitoxic modifiers. At the same time the information about the influence of this medication on the specific potency of the chemo- and radiotherapy is ambiguous and rare.

Experiments are performed on 95 female-rats of the С57Bl/6 line of 20-22 g in weight from the “Stolbovaya” [translit from Russian] nursery. The mice were contained in standard conditions of a State Mordovian vivarium under natural light regime, on a standard diet, having free access to food and water. All procedures with animals were organized according to European Convention for the protection of vertebrate animals used for experimental and other scientific purposes (Strasbourg, 1986). Lewis lung carcinoma (LLC) cell suspension (1 million cells in Hanks’ solution) was intramuscularly passaged into the femoral area. The animals have been divided into 4 groups.

The study design is performed in Table 1. The radiation of the animals had been organized with the help of the “Agat-R1” [translit from Russian] device. On the 22nd day the mice have been withdrawn from the experiment under ether narcosis. Blood, different tissues and organs (liver, lungs, tumor node) of mice were used as a material. The efficiency of the treatment was estimated by the essential lesion volume and mass, antimetastatic effect was estimated by an average number of interfacial lung metastases for one animal and metastasis inhibition index (MII) [8]. To evaluate changes in lipid peroxidation (LPO) in blood serum there has been: a malondialdehyde (MDA) level determined, Fe-MDA (in reaction with thiobarbituric acid (TBA) using «Agat-Med» [translit from Russian] reagents kit for TBA-products test, including TBA-tasting probe incubation, the extraction of the butanol reaction products and spectrophotometric measurement of their content) and catalase potency [9], and in organs homogenates (liver, essential lesion) the MDA concentration, Fe-MDA, catalase potency and superoxide dismutase (SOD) [10].  During the statistical analysis  of the research there had been the following indices determined: means (M), standard error of the mean (m), metastasis inhibition index in percents. The normalcy of distribution was checked with the help of Kolmogorov-Smirnov’s test. If the normalcy of distribution was proper the validity of the differences of the values was estimated using the Student’s t-test. If there is non-normality the validity of the differences was estimated using the Mann-Whitney T-test. The differences were valid at р<0.05. 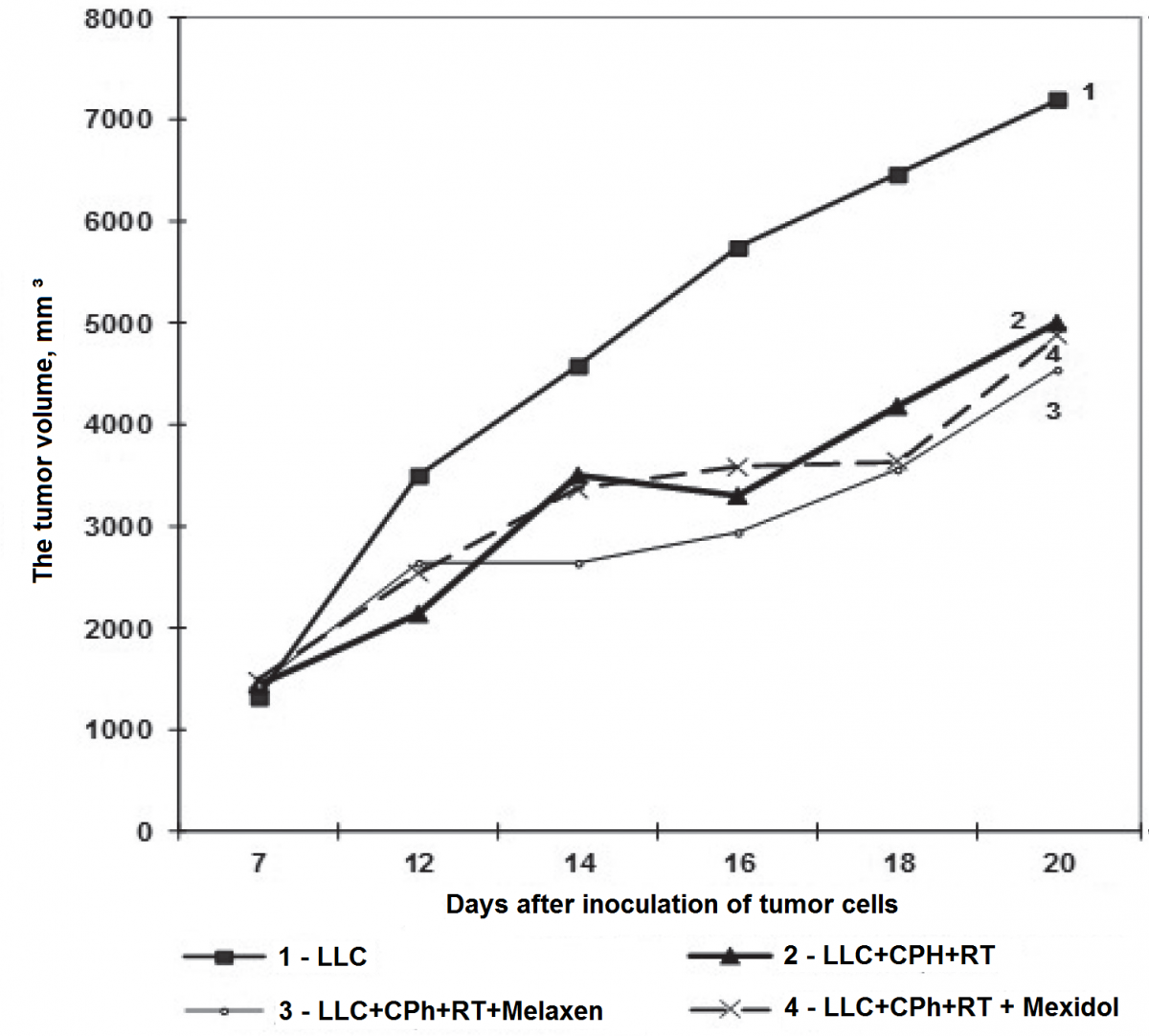 Figure. The  LLC growth dynamics at mice during the complex Melaxen, Mexidol and chemoradiotherapy

Table 2. Antimetastatiс efficiency indices of a complex chemoradiotherapy, Mexidol and Melaxen in mice with LLC (M±m)

р1 – the differences accuracy is calculated correspondingly to LLC group.

Table 3. Influence of the complex chemoradiotherapy and Melaxen treatment on lipid peroxidation process in mice with LLC (M±m)

The results of the study displayed that Melaxen and Mexidol did not reduce the antitumour effect of the chemoradiotherapy. Antimetastatic effect of the complex of chemoradiotherapy, Melaxen and Mexidol did not reduce as well. During the estimation of the LPO processes there had been free radical processes with tumour registered. This is confirmed by the fact that there was the MDA level increase in liver and in blood serum, and in liver there had been registered catalase potency increase (which was of a compensatory origin). In a blood serum there had been catalase potency decrease because of the antioxidant system depression.  The chemoradiotherapy had been limited the lesion progress and reduced the free radical intensity at animals, which was clear from the fact of the MDA level decrease in a blood serum and liver, and keeping catalase potency level at the level of intact animals indices.  The SOD potency decrease was only in liver. However in the lesion there had been opposite changes registered: activation of the LPO process with MDA level increase and catalase potency decrease, the SOD potency increased as well. The complex Melaxen and chemoradiotherapy treatment, as well as with Mexidol, allowed to prevent more effectively the LPO processes at animals. This was confirmed by the MDA level decrease and catalase potency increase in liver (comparing with the chemoradiotherapy treatment only). But Mexidol prevented the SOD potency increase in liver more effective than Melaxen. In the lesion Melaxen and Mexidol did not defeat an intensified free radical activity, but reduced the SOD potency comparing as with the CPH+RT group as with the control group (on the background of the MDA high level), which is coherent with the antioxidant selective effect on the normal tissues metabolism [11].  However Mexidol usage, in contrast with Melaxen, displayed catalase potency increase in a lesion.  The data we have got are an experimental validation of the study of Melaxen and different antioxidant drugs usage as medications of an adjunct therapy in oncopathology, and enrich knowledge about Melaxen pharmacodynamics.

All experiment and studies are organized on the authors’ own behalf, without any sponsorship. There is no private and juridic persons’ commercial interest in the result of the research.