romj-2020-0403.pdf
Abstract:
The purpose of this work is to study the interaction between the autonomic regulatory loops of blood circulation from long time series. Methods ― We simultaneously recorded four-hour signals of electrocardiogram and photoplethysmogram from the ear and finger of ten healthy adults. We determined the intervals of phase synchronization of the studied regulatory loops and analyzed the dependence of their length on the recording time. The deviations of the total percentage of phase synchronization (index S) from its mean value were estimated in moving non-overlapping windows. Results ― For studied signals we found no significant correlation between the length of synchronization epoch and the time of its beginning. A sharp increase in the deviation of the index S from its mean was shown at the end of the experiment. Conclusion ― The increase in the deviation from the mean at the end of our records is most likely associated more with psychosomatic influences than with hormonal regulation or immobilization stress.
Keywords:
autonomic control, heart rate variability, photoplethysmogram, phase synchronization, low-frequency oscillations
Cite as:
Skazkina VV, Karavaev AS, Borovkova EI, Simonyan MA, Prokhorov MD, Ponomarenko VI, Dubinkina ES, Bezruchko BP, Gridnev VI, Kiselev AR. Uncovering interaction between the loops of autonomic regulation of blood circulation from long time series. Russian Open Medical Journal 2020; 9: e0403.

Some studies associate the development of stable oscillatory regimes in the heart rate with the interaction of several loops of autonomic regulation. Moreover, a change in the dynamics of such loops, compared, for example, with the evolution of pathological processes, led to a simplification of the dynamics of the heart rate and a decrease or disappearance of variability [1-5]. In the low-frequency (LF) range (0.04-0.15 Hz), the loops of autonomic regulation of blood circulation provide normal control of heart rate, contractile force, vascular tone, and other processes of the cardiovascular system, which allow the system to flexibly adapt to the needs of organism. At the same time, the humoral regulation system also has an effect on the functioning of the circulatory system [6].

The experimental studies involved ten healthy volunteers aged 19 to 24 years. We carried out simultaneous registration of electrocardiogram (ECG) and photoplethysmogram (PPG) signals (signal of blood filling of the finger and ear, recorded by an optical sensor with active backlight in reflected light) of the vessels. The data were registered with a standard polyrecorder EEGA-21/26 “Encephalan-131-03” (Medikom MTD Ltd, Taganrog, Russia). The bandpass was 0.05–100 Hz and the sampling rate was 250 Hz, digitized at 14 bits. ECG was recorded in the standard lead I according to Einthoven (differential signal from the wrists of two hands) and PPG was recorded from the distal (last, upper) phalanx of the ring finger and earlobe [14]. The PPG signal from a finger was recorded using a reflected light sensor in the IR range (950 nm) and the PPG from the ear was recorded using a reflected green light sensor (560 nm) [15, 16].

The experimental data were recorded at rest in horizontal position. The length of each recording was 240 minutes. Figure 1 shows typical examples of experimental signals.

The study of heart rate variability from the ECG signals began with the extraction of the sequence of RR-intervals, i.e. a non-equidistant sequence of the time intervals between the R-peaks. Further, by the recommendation [17], we interpolated the obtained sequence using a cubic b-spline (Figure 1a).

The first step of the analysis included the estimation of epochs of phase synchronization between the LF-oscillations in RR-intervals and PPG using a technique proposed in Ref. [18]. To calculate the phase of LF-oscillations in the experimental signal, we construct the analytic signal ξ(t) for the signal s(t) obtained as a result of bandpass filtration (0.06-0.14 Hz) of the experimental signal. The signal ξ(t) is a complex function of time defined as follows:

Where A(t) and φ(t) are, respectively, the amplitude and phase of the analytic signal and the function s ̃(t) is the Hilbert transform of s(t),

where P.V. means that the integral is taken in the sense of the Cauchy principal value. Phase φ(t) is defined from Eq. (1) as

Then we calculate the phase difference 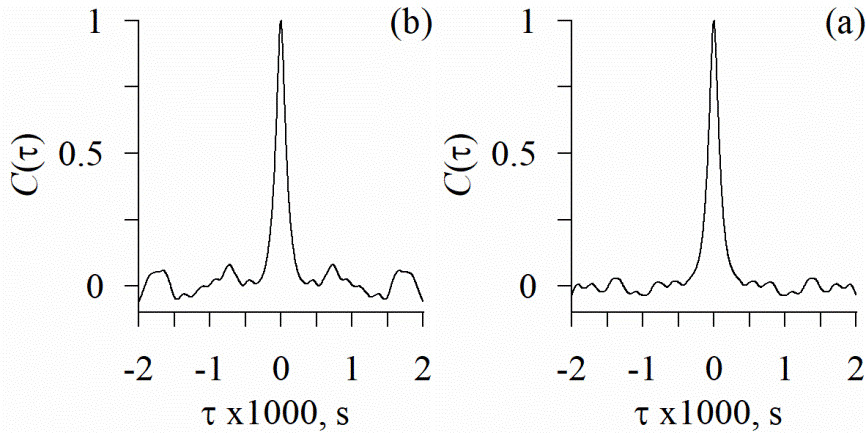 We also calculated the autocorrelation function for all epochs of synchronization. These functions quickly fall to 0, that is typical for a chaotic process (Figure 3).

Based on the results of Ref. [13], where two-hour signals were studied, we also estimated the total percentage of phase synchronization (index S).

Than we estimated the deviations DS from the mean S value for each pair of signals: RR-intervals and finger PPG, and RR-intervals and ear PPG. DS are calculated in moving non-overlapping windows w with a length of 1000 seconds. Figure 4 presents the dependences DS(w) averaged over the ensemble of records and the standard deviations.

Figure 4. Averaged values of deviations from the mean S value calculated in moving windows w. (a) RR-intervals and finger PPG; (b) RR-intervals and ear PPG. w value corresponds to the middle of the interval used for the calculation of index S. The whiskers designate the standard deviation.

In Ref. [13], it was found out that the length of records for assessing the index S should be at least 600 seconds. The deviation from the mean S in moving windows (1000 s) was estimated from two-hour data. A small but significant decrease in the index S from the mean value was observed in the middle of the second hour. After that, at the end of the record, S returned to its value at the beginning of the experiment. To explain this process, we proposed a hypothesis about the effect of immobilization stress on the regulatory mechanisms of blood circulation due to prolonged immobility of the subject. It is also possible that the observed features are caused by impact of the humoral regulation system on the studied processes. In the present study, we use longer recordings to examine the correctness of these hypotheses.

Figure 4b shows the greater change in the deviation of index S from the mean value than Figure 4a. The difference between the Figure 4a and Figure 4b may be associated with the peculiarities of local microcirculation, which we analyze by PPG from the ear. At the same time, PPG from the finger gives us mainly information about the mechanisms of the central nervous regulation of vascular tone [14-16]. It is worth paying attention to the sharp increase in the value of DS at the end of the record in both Figure 4a and Figure 4b. Earlier, we observed similar effect studying two-hour recordings [13] and assumed that it can be explained by the immobilization stress caused by a long stay in the immobile state and/or by slow humoral regulation. In this study, we increased the duration of the experiment to four hours, but the sharp increase in the value of DS was again observed at the end of the experiment. Probably, it may be associated with psychosomatic influences that could be triggered by reports of the remaining time of the experiment. We informed the subjects about the remaining time of recording every half hour of the experiment.

We studied the features of autonomic regulation of blood circulation using long-term four-hour simultaneous recordings of ECG and PPG signals. We estimated the lengths of epochs of phase synchronization between the LF oscillations in RR-intervals associated with the autonomic regulation of heart rate and both LF oscillations in finger PPG reflecting the tone of large vessels and LF oscillations in ear PPG reflecting the tone of small vessels and capillaries. For both pairs of signals, no significant correlation was found between the length of synchronization epoch and the time of its beginning.

We also tested the hypothesis about the increase in the average deviation of the total percentage of phase synchronization from the average value by the end of the two-hour experiment due to the influence of humoral regulation and/or the progress of immobilization stress [13]. In the present study, we observed an increase in the deviation of index S from the mean value by the end of the four-hour experiment, which probably, may be associated with psychosomatic effects.

All procedures performed in the studies involving human participants were in accordance with the ethical standards of the institutional and national research committee and with the 1964 Helsinki declaration and its later amendments or comparable ethical standards. Design of this study was approved by the Ethics Committee of the Saratov State Medical University (Saratov, Russia) in 2019 and written informed consent was obtained from all subjects who participated in this study.