Morphology and biomechanical properties of cerebellar arteries in adults

Scientific literature contains not numerous information about the dimensional characteristics of cerebellar arteries, most of which has been dated back to the second half of the previous century [1-5, etc.]. Not all of the papers indicate the total number of examinations, basic statistic data allowing to evaluate their variability and significance of the differences. Contemporary data on sizes of cerebellar arteries, bilateral variability of an outside diameter and angles of divergence of cerebellum arteries are sporadic [6-8], or present not for all cerebellar arteries [9, 10]. Biomechanical parameters of cerebellum arteries have not been described in the literature. Meanwhile, knowledge of morphological and biomechanical structural features of cerebellar arteries has a significant general biological meaning from the viewpoint of phylo- and anthropogenetic transformations of cerebrum vessels and maintains an applied orientation, as it is needful for interpretation of some visualization research methods and for modeling circulatory dynamics of a cerebrum.

The goal was to analyze the variability of a number of morphometric and biomechanical parameters of cerebellar arteries in adults aged 20-74 years.

For the study of morphometric parameters of cerebellar arteries we used 24 preparations of arterial complexes «arterial circle – cerebral arteries», made by means of B.K. Ginze method (modified by V.I. Bick) and composing scientific angioneurologic collection of human anatomy department of Saratov State Medical University (Saratov, Russia) (Figure 1). For manufacturing such drugs cerebral arterial vessels together with arachnoid covering were removed and straighten between glasses in their natural position. Outside diameter of cerebellar arteries and distance between divergence place of posterior inferior cerebellar artery (PICA) and mouth of basilar artery (BA) were measured by microscope. 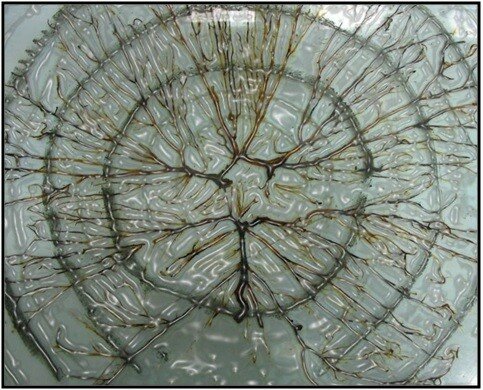 To study deformation and strength properties, 179 samples of cerebellar arteries, obtained by autopsy of adults without visible cerebrovascular pathology, were used. Fence material was carried out in 12 hours after death. Total number of the studied samples: superior cerebellar artery (SCA) – 114, anterior inferior cerebellar artery (AICA) – 44, PICA – 21. During the experiment on uniaxial longitudinal stretching at a tensile testing machine Tira Test 28005 (TIRA GmbH, Germany), we were studying overall strength (maximal effort up to break) and relative deformation of arteries.

Angles of divergence of cerebellar arteries were measured by computer program «Micrografx Designer 9.0», digital photos of 47 native preparations of cerebrum were imported to this program.

Statistical data processing was conducted by means of computer program Statistica 6.0. Distribution was close to normal. As the variation and statistical parameters, the following parameters were calculated: minimum value (min), maximum value (max), arithmetic mean (M), error of arithmetic mean (m), standard deviation (σ), ratio of variation (Cv). Significance of differences in these groups was assessed by Student's criterion. Statistically significant difference between groups of comparison was considered as P<0.05.

SCA at all of observations was present from both of the sides and started from anterior part of basilar artery. Doubling of SCA was determined on the right side in 8%, on the left side in 13% of cases.

SCA is the largest among the other cerebellum arteries (Figure 2). Outside diameter of this artery varies from 0.70 до 2.90 mm, and on an average is 1.50±0.07 mm (n=53; σ=0.51 mm; Cv=34,7%). The right and the left SCA were similar in their diameters only in 16% of the observed cases. In 42% either the right or the left artery prevailed. Statistically significant bilateral differences were not determined. 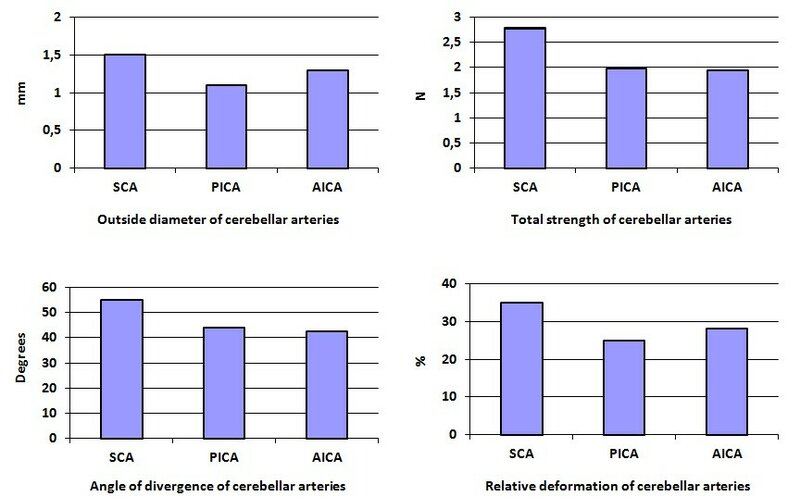 Figure 2. Variability of outside diameter, angle of divergence, total strength and relative deformation of cerebellar arteries

AICA is a permanent present artery. In 33% of cases it was absent on one of the sides; in 16% it was absent on both of the sides. In 100% of observations AICA started form lower (61%) or middle third of basilar artery (39%). Wherein, it branched out from the lower third of BA on the right side (79%), from the middle third part of BA – on the left side (57%). We didn’t mention doubling of the artery.

PICA is not also a permanent present artery. PICA was absent: on the right in 4%, on the left – in1%, on both sides – in 2% of cases. In 96% it started from vertebral artery; on the right side it was 2 mm nearer to mouth of basilar artery. In 4% of cases PICA began its start from basilar artery. Wherein, at half of observations this artery branched out after basilar artery background, in remaining cases – about 4 mm from the place of vertebral arteries merger. We did not find the cases of this artery doubling.

Most of the material available in literature concerning cerebellar arteries has been devoted to their variants and abnormalities. In comparison with other cerebellar arteries, SCA presented in literature has been analyzed rather circumstantially. Permanent presence of SCA and its start from basilar artery are acknowledged by the majority of the studies [1, 3, 10]. We have not found a single case of SCA divergence from a Р1-segment of PCA, as it was described by R.N. Lyunkova and V.V. Krylov (2014) [10]. The outside diameter that we have obtained was conformed by the data of I.F. Krupachev and N.N. Metalnikova (1957) [1], as well as J. Lang (1995) [5]. A slightly larger diameter has been received by S.N. Ogneva (1957) [2], V.N. Lyunkova and V.V. Krylov (2014) [10]. In scientific papers the angle of divergence of SCA has been described as a straight (900) [1, 11], however this fact has no confirmation in the present study.

AICA has fewer descriptions in the literature. I.F. Krupachev (1957) observed absence of AICA in 2% [1], S.N. Ogneva (1950) – in 4% of cases [2]. Consequently, cases of AICA aplasia have been revealed more often than it was mentioned in literature. AICA as one of cerebellar artery is characterized by a small diameter; this has confirmation in other authors’ proceedings [1, 3]. According to J. Lang (1995) [5], the outside diameter of this artery is larger (on an average more than 0.6 mm) unlike our data.

Our study demonstrated that PICA was rarely absent than it has been reported in literature [4, 11]. The majority of researchers have described an outside surface of the upper third part of a vertebral artery and rarely its lower third part of a basilar artery as the start point of PICA [1-3, 9, 11]. According to L.V. Pazhinsky et al. (2007) [7], who have studied 90 anatomic preparations of a human cerebrum, PICA has always its divergence from a vertebral artery. We observed this phenomenon in 96% of cases and in 4% – it had divergence from a basilar artery. Data concerning outside diameter of PICA correspond to the information form scientific literature [3]. In the proceeding of A.G. Vinokurov et al. (2011) [8] diameter of the left PICA is 1.8 time more than of the right, 2.3 mm and 1.3 mm respectively. Our material didn’t confirm the presence of significant bilateral differences.

Information about deformation and strength properties of wall of cerebellar arteries has not been discussed in scientific literature. Thereby, there is no opportunity to compare our data with the data of other researchers.