Acute pain intensity in men and women after septoplasty

romj-2017-0305.pdf
Abstract:
Acute pain in the initial period after surgery on cartilaginous part of the nasal septum was studied. It is shown that the pain level was significantly higher in women than in men (P<0.01). It is concluded that gender should be taken account of in pain relief strategy after this type of surgery.
Keywords:
gender, pain syndrome, analogue pain scales
Cite as:
Kastyro IV, Torshin VI, Drozdova GA, Popadyuk VI. Acute pain intensity in men and women after septoplasty. Russian Open Medical Journal 2017; 6: e0305.

Pain intesity depends on multiple factors and frequently had subjective nature [11]. Age, sex, social and cultural background and so forth are among those factors [12, 13].

For example, women are more sensible to pain stimuli and take pain more seriously than men [13]. Considering sex factor, there are some difficulties in estimation of average pain level of a group consisted of male and female patients. But self-assessment is more important than group pain level.

Common methods of pain estimation are Visual Analogue Scale (VAS) [8, 14, 15], Numeric Rating Scale (NRS) [16-18], McGill pain index [19, 20], etc. Likert scales are used for nasal symptoms (crusting, bleeding, sneezing, secretion, and nasal pain). In rhinology VAS [10, 22] or NRS [23] are basically applied for pain and discomfort level measurement during anterior nasal packing and so on. And there are no significant attempts to use another modification of pain intensity procedures to improve pain diagnostics after septoplasty.

It is hard to overrate the importance of diagnostics of pain in patients after septum surgery. So, it is recommended to administer one of analgesic ladder drugs (e.g. non-steroidal anti-inflammatory drugs) to patients with 0 to 29 mm of VAS pain level. If there is a case of 30 to 59 mm one or two ladder drugs should be prescribed such as weak opioid (e.g. codeine, dihydrocodeine or tramadol). Patients with pain of 60 to 100 mm should take three analgesics including strong opioids (e.g. s morphine, fentanyl, buprenorphine, methadon) [24]. Estimation of such analgesic therapy is of great importance.

We didn’t find up to date data on thorough analysis of pain intensity distribution of patient in otolaryngology especially concerning sex differences.

The study was aimed at characterization of pain level distribution in men and women after septoplasty and development and testing of a new sex-specific pain scale.

Acute pain syndrome was investigated in patients with nasal septum deviation after septoplasty. 46 men aged from 16 to 44 and 36 women aged from 20 to 37 were operated on (Table 1). Septoplasty was conducted under topical anesthesia by 2% lidocaine solution and infiltration anesthesia by 5% procaine solution. Patients after surgery on cartilaginous part of the nasal septum only was included since surgical field size and vegetative nervous system activation affect postoperative pain intensity [25]. 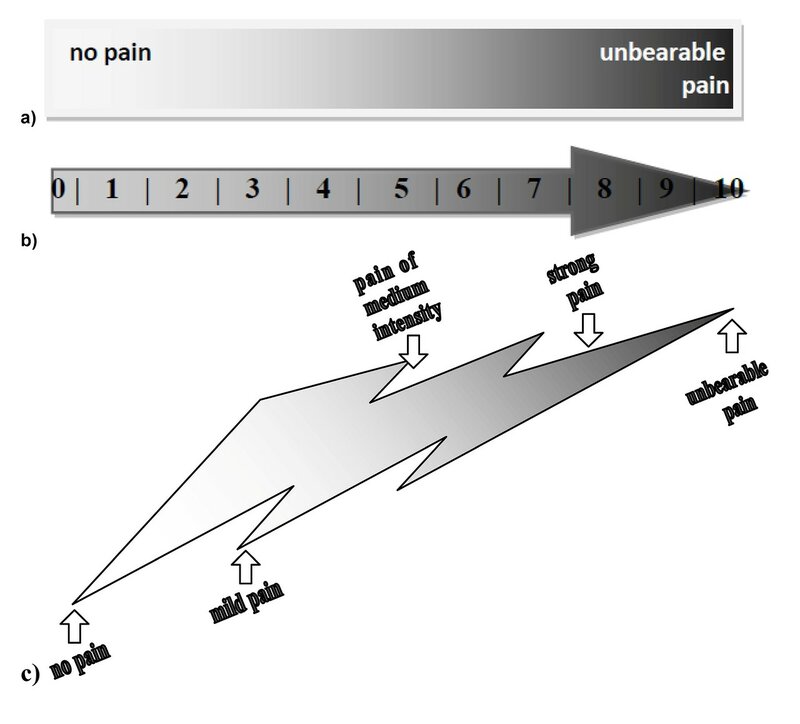 Pain intensity was measured by means of three pain scales: VAS [8], NRS [26] and Verbal “Lightning” Scale (VLS) (Figure 1). VLS was proposed by our research group for pain syndrome assessment. Intensity of pain was registered in millimeters in two hours after surgery. Our modifications of pain scales were used [27] (Figure 1). Patients were divided into following subgroups: with no or weak pain (0-25 mm), with moderate pain (26-50 mm), with strong pain (51-75 mm), and very strong pain (76-100 mm). Our VLS unlike common pain scales is no rectilinear. Its horizontal projection length is 100 mm. And it had broadened set of verbal pain descriptors (“no pain”, “mild pain”, “moderate pain”, “strong pain”, “severe pain”) (Figure 1c). While assessing pain by VLS patient draw a vertical line crossing scale where s/he think it’s right place to reflect his/her sensation of pain. Pain level measured by VLS is the length of the part of VLS cut off by vertical line projected to millimeter scale under VLS. Data obtained by VLS were compared to those on VAS and NRS.

Significance of mean values differences was determined by Student’s t-test. Linear regressions for VLS-VAS and VLS-NRS pairs were studied.

According to average pain level values in 2 hours after septoplasty men were distributed as folows: 39.1% had no or mild pain, 39.1% had moderate pain, 21,7% had strong pain, no patient had severe pain (Figure 2). 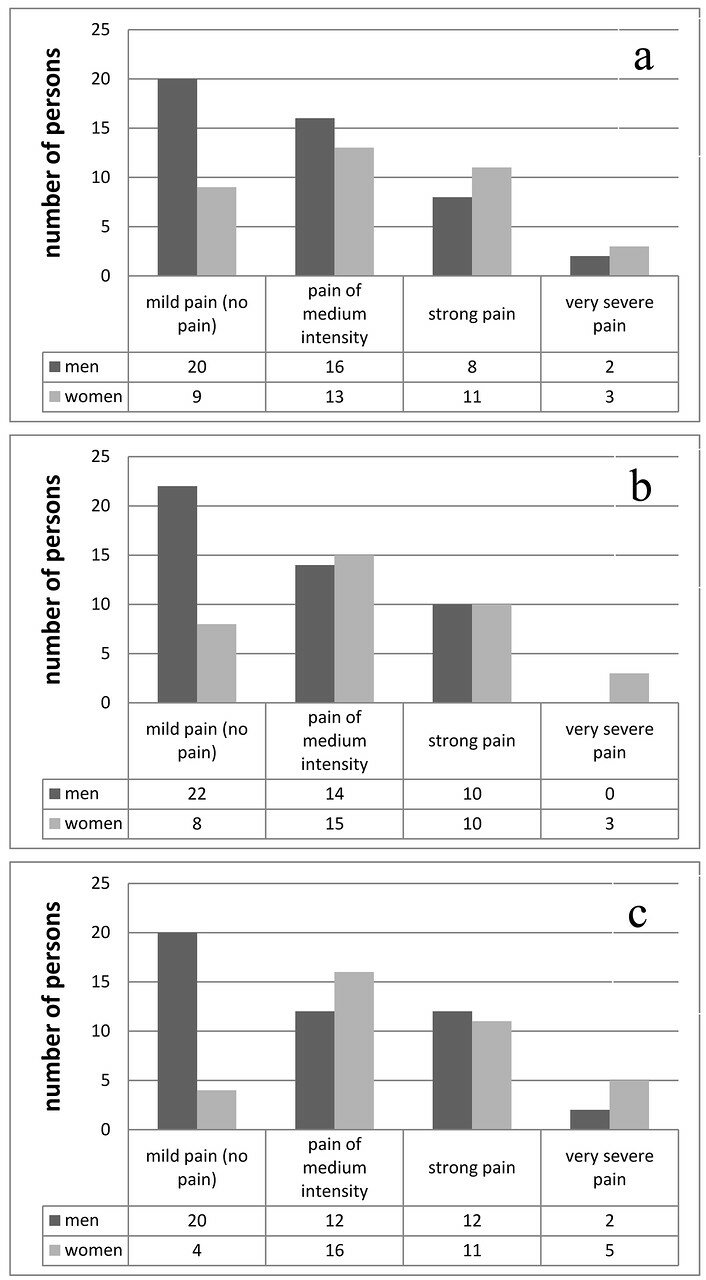 Strong pain only was diagnosed in men by means of VAS and VLS with no prominent difference in mean values which was also found for women (Figure 3).

Linear regression analysis showed that coefficient of determination between VAS and VLS values for men was 0.84 (Figure 4a) and between NRS and VLS values was 0.85 (Figure 4b). The same procedure for women yielded 0.83 and 0.81 accordingly (Figure 4c-d). 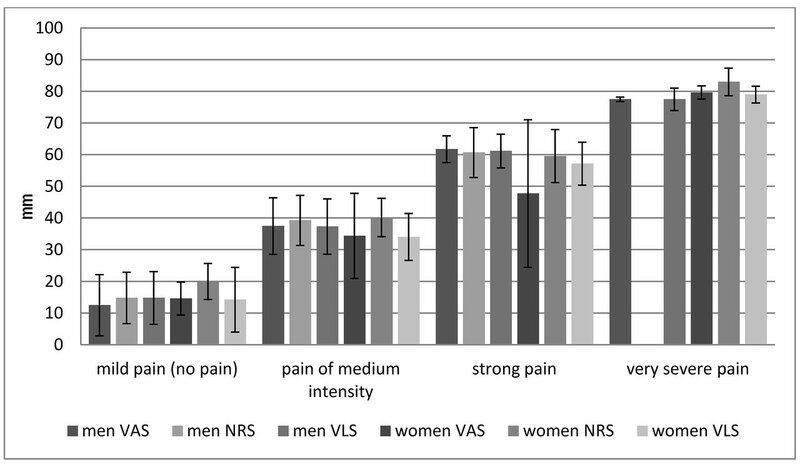 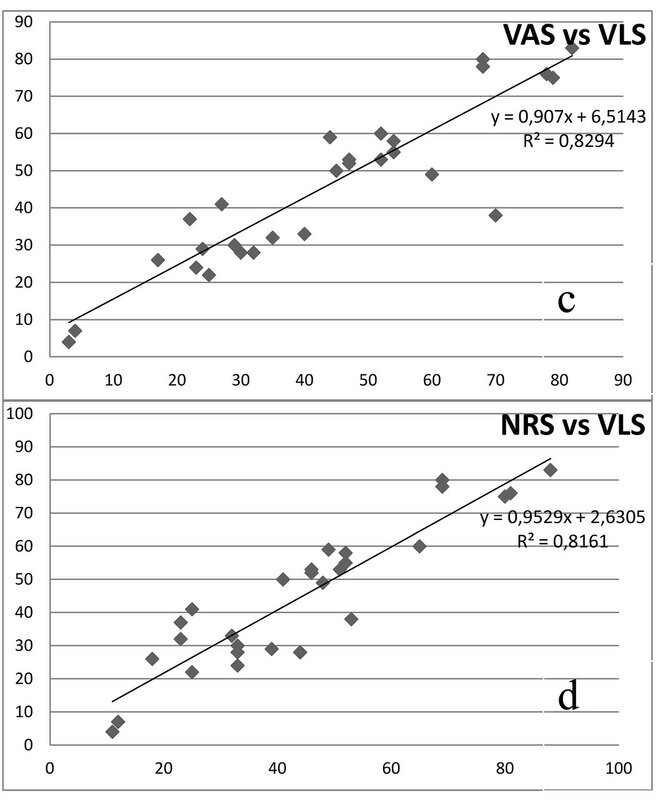 Most of men got into groups for milld and moderate pain while most of women found themselves in groups for moderate and strong pain. Average pain intensity values were 14.0±8.7 for men with mild pain, 38.0±8.5 for men with moderate pain, 36.2±9.0 for women with moderate pain, 58.9±12.8 for women with strong pain. D. Malki et al. and I. Cukurova et al. reported 2.2 and 4.8 out of 10 pain intensities during the first day after septoplasty [31, 32] measured by VAS. But they didn’t note any statistically prominent difference between anterior packing, septal suturing and splint. M.S. Awan & M. Iqbal [33] compared nasal packs versus septal suturing. They concluded that packing led to stronger pain (7.32 out of 10). M.M. Ardehali & S. Bastaninejad and J.A. Cook et al. communicated that anterior nasal packing caused pain of 5.0 and 4.8 which corresponded to our 50 and 48 mm values [34, 35]. O. Gunaydin et al., T.E. Habesoglu et al., D.A. Nunez & F.W. Martin showed folowing first day after septoplasty with anterior packing pain intensity values: 5.9, 6.09 and 4.1 [28, 36, 37]. Almost all authors point out that nasal packing leads to more pronounced pain syndrome than nasal suturing and splints [38]. Merocel Yilmaz M.S. et al. recounted 6±2.21 out of 10 [39] and A.K. Amin et al. told of 27±9.52 out of 100 pain intensity in patients after septoplasty with nasal packing [40]. All studies data were in accordance with our results.

Comparing two data sets (data on pain scales, in our case) by using of linear regression is possible only if the data set fulfill three requirements. First one is scatter plot of the values for two variables should show linear association. Second one is scatter of the points in the scatter plot around the line should be similar throughout the length of the line. Third one is residuals of the points in the scatter plot meaning the difference between the expected points and observed points should have a normal distribution [41]. Our data satisfied these conditions.

It should be noted that in our study women showed stronger pain level using NRS. On the contrary, pain intensity values measured by NRS for men were lower than those measured by other scales. M.A. Ferreira-Valente et al. study confirms this observation. Authors studied nociception applying cold and concluded that NRS was more gender sensitive and specific than VAS and verbal scale [42]. J.F.M. van Dijk et al. [43] revealed that “bearable pain” didn’t mean the same for men and women. Women reported higher NRS values for “bearable pain” than men. Significantly more women than men considered NRS 5, 6 and 7 to be ‘painful but bearable’. Women reported more postoperative pain than men, but more women considered intermediate NRS scores as ‘bearable pain’. This finding should be taken into account in treatment decisions and guideline development.

Gender apparently cannot be the independent predictor for postoperative pain or for planning postoperative analgesia. Data on sex differences for pain perception and analgesic intake remain tentative and age can make difficulties in pain prediction. The mechanism for gender differences is still elusive [52]. There is some evidence that genetics plays a part in influencing interindividual variation in clinical and experimental pain responses [57]. It can also be attributed to a different socialization processes for men and women that influence bodily experience and the willingness to communicate distress [46]. Hormone variations [58], neurotransmitters that can influence patient perception of pain, and pharmacokinetic variations may also occur [57].

Hence, there are some open questions for analgesia in rhinology: is there a correlation between postoperative analgesic intake and sex? What features has pain when operative area includes whole septum? Does pain depends on sex and packing type in this case?

Our study showed that postoperative pain during initial period after surgery on cartilaginous part of the nasal septum significantly higher in women than in men. This allows considering sex as predictor for pain intensity in this type of surgery and for planning postoperative analgesia. VAS and VLS can be used regardless of sex for pain assessment after septoplasty. As for NRS, it should be taken into account that women mark higher NRS pain level as compared to VAS and VLS.

No conflict of interest