Comparison of impact of medical therapy and surgical treatment on overall mortality in patients with severe chronic heart failure: a meta-analysis

In the last decades problem of choosing how to manage patients with chronic heart failure (CHF) is becoming more and more relevant, because new approaches to this condition are being developed and included in clinical guidelines [1-5]. Standard models of organizing care for patients with CHF are also being developed [6], methods of evaluating its quality and efficacy are being perfected [7] and CHF registries are created [8-14]. Researchers turn their attention to different aspects of CHF: from influence of low-intensity electromagnetic fields on endothelium function [15] and genetic determinants of CHF [16] to vegetative [17] and cognitive dysfunction [18].

Defining optimal treatment for patients with severe CHF to improve their short-term and long-term prognosis remains an unsolved problem for modern cardiology and cardiac surgery, as condition of many patients worsens even while receiving medical therapy (MT). This fact has stimulated the development of surgical techniques for management of severe CHF, such as cardiac resynchronization therapy (CRT), cardiac resynchronization therapy combined with cardioversion-defibrillation (CRT-D), circulatory support system implantation (CSS) and heart transplantation (HT), which have their efficacy already proven [19-24].

Earlier we have conducted a five year prospective clinical trial to evaluate long-term results of medical and surgical treatment in 90 patients with New York Heart Association (NYHA) functional class III-IV of CHF, who have received treatment in A.N. Bakoulev Scientific Center for Cardiovascular Surgery in 2007 [25]. Advantage of surgical treatment over traditional MT in setting of severe CHF was shown.

Despite great interest towards surgical and medical management of severe CHF, we found no comparative meta-analyses on this topic in available literature.

Aim of this study was to perform a meta-analysis of major clinical trials which compared the efficacy of MT and surgical treatment (CRT, CRT-D, CSS and HT) of patients with severe CHF.

Inclusion criteria for the trials to be included in meta-analysis were:

Table 1. Brief description of studies which evaluated efficacy of MT in patients with severe CHF

Table 2. Brief description of studies which evaluated efficacy of CRT in patients with severe CHF

Also, meta-analysis included 2 trials on evaluation of efficacy and safety of surgical treatment for terminal CHF: REMATCH study [49] and Kotsoeva-Bockeria study (CSS, HT vs MT) [25, 68]. In these trials efficacy and safety of CSS usage, orthotopic HT and MT in patiens with NYHA class III-IV CHF were compared.

Table 3. Data on lethality in patients with severe CHF on different modes of treatment (results of randomized clinical studies) 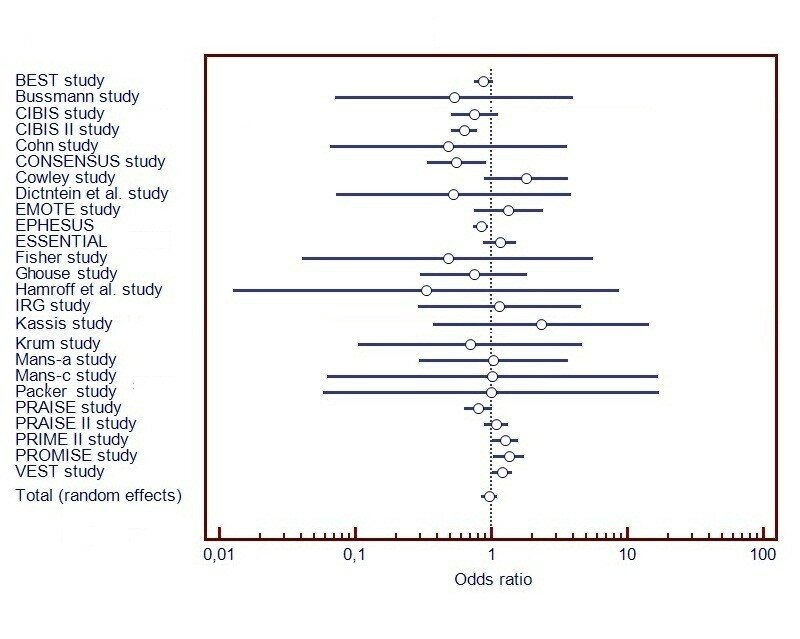 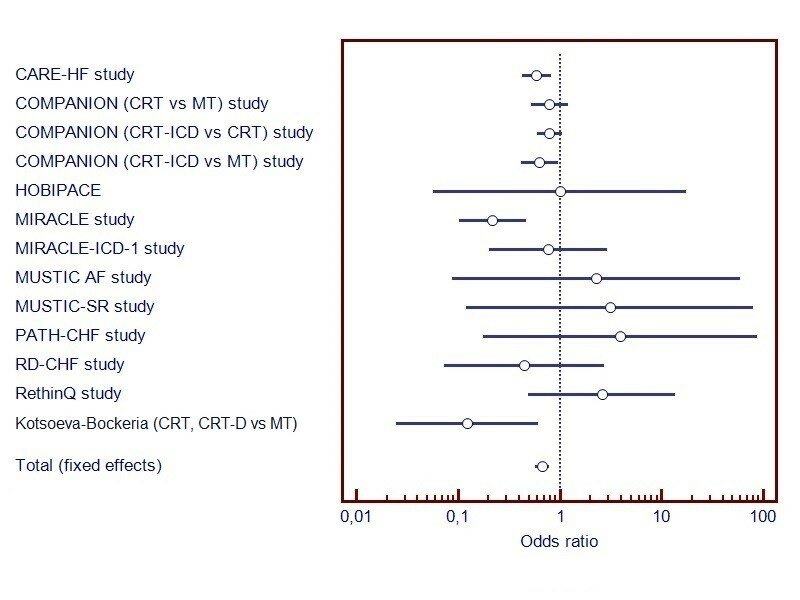 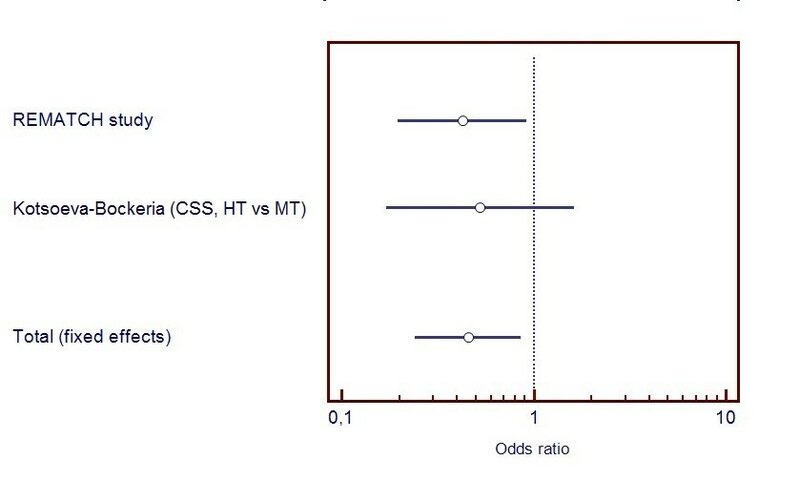 C
Figure 1. A metagraph of overall mortality in patients with severe CHF on MT (a), CRT / CRT-D (b) and CSS usage / after HT (c) compared to control group.
Left column shows names of the trials (brief description of trials is given in Tables 1, 2 and text). «Total» – total evaluation of odds ratios.

Results obtained in this meta-analysis complement existing knowledge on value of various options of surgical treatment for severe CHF. Evidence on a certain degree of superiority of surgical management over traditional MT in terms of decrease in overall mortality was gained.

CRT is studied most comprehensively of all surgical options. It is known that effect of CRT is pathogenetically based on its influence on interventricular dyssynchrony, which elevates personal risk level in patients with severe CHF [69]. Meta-analysis of CRT and CRT-D efficacy in patients with CHF is known, where it was demonstrated that CRT decreases overall mortality and hospitalization rate due to CHF, irrespective of NYHA class [70]. However, patients with I-II NYHA class CHF had too many adverse events, so is is advised to use CRT only for III-IV NYHA class patients [70]. It is important to note that CRT is seen by some authors as a temporary alternative solution for patients who will inevitably require transplantation [71, 72].

CSS implantation allows to improve quality of life of patients with severe CHF for a prolonged period, which is especially important for those who are in line for HT. M.S. Slaughter et al. [73] have demonstrated a relative safety of modern CSS in terms of stroke risk. A relatively favorable prognosis in patients with severe CHF with active CSS is confirmed by several literature reviews [74].

HT surgery is also a treatment of choice for selected patients with terminal CHF, especially when other options fail. Of course, HT is unable to radically change the situation with CHF on a population level [75].

It is out of the question that clinical decision making and personal risk evaluation for surgical management of severe CHF should be done with consideration of other risk factors, already well studied for cardiosurgical patients [76-80].

Of all trials included in this meta-analysis, none evaluated gender-specific effects of treating severe CHF on long-term prognosis. This problem requires thorough research in the future, with results by S. Zabarovskaja et al. taken into account [24], which provide evidence of lower long-term mortality in women who were treated with CRT when compared to men.

An important limitation of this study was small number of trials on HT included for analysis.

Primarily, this meta-analysis has demonstrated the advantages of surgical options for treatment of severe CHF (such as CRT, CRT-D, CSS and HT) over traditional MT in terms of decrease of overall mortality.