Stem cell therapy in ischemic diseases has been regarded as a new method to repair ischemic tissues and promote neovascularization. Coronary artery disease (CAD) remains a major cause of morbidity and mortality [1-2]. Angiogenesis play a crucial role in regeneration of ischemic tissues. Different types of stem cells may be used for therapeutic neovascularization, including endothelial progenitor cells (EPCs), which play an important role in neovascularization, and in regeneration of injurie vessels [2-3]. Also, mesenchymal stem cells (MSCs) can be used for vessel repair, because they can migrate into damaged tissue and produced paracrine growth factors [2-3]. Stem cells therapy for improvement myocardial function and perfusion is perspective method in patients with CAD [2-4]. Bone marrow progenitor cells are able to migrate in ischemia zone, and stimulate proliferation of the resident progenitor cells, and differentiation, and migration in a damage zone, and reduce an ischemia zone through formation of new vessels [2-4]. Those effects of progenitor cells in the majority are caused by action through production of a wide range of paracrine growth factors [5]. Efficacy of stem cells therapy depends on circumstances in region of myocardium where cells were implanted. So, oxidative stress reduced survival rate of stem cells [6]. Early, we reported that erythropoietin abolished negative effect of the hypoxia on bone marrow mesenchymal stem cells proliferation [7].

Aim of study: to assess the effects of short-term precondition of bone marrow mononuclear cells (BM-MNCs) with erythropoietin (Epo) on the phenotype of stem cells and survival rate of the BM-MNCs under hypoxia-condition in vitro.

Thirty samples of BM-MNCs for evaluation of anti-apoptotic effects of Epo in vitro were performed at the Meshalkin National Medical Research Center (Novosibirsk, Russia) as isolated procedure for patients with CAD.

The study design was randomized and uncontrolled. All patients were randomized in January 2016 – June 2017 period.  Informed consent was obtained for all patients before participation in the study.

Patients had to be at least 45 years old, suffering from coronary artery disease (CAD), and receiving constant state-of-the-art pharmacotherapy for at least 3 months prior to enrolment. 95% were men. All were in angina NYHA class II-III. Hypertension was presented in 90% of patients, peripheral atherosclerosis in 60%.

The inclusion criteria were as follows:

Patients who meet eligibility criteria will be scheduled for bone marrow harvest.

BM-MNCs were quantified using the following approach: ethylenediaminetetraacetic acid (EDTA) collection tubes were transported on wet ice into the cellular technology laboratory in Research Institute of Clinical and Experimental Lymрhology – Branch of the Institute of Cytology and Genetics (Novosibirsk, Russia) and preceded within 2 to 3 hours.

The 106 BM-MNCs/cm2 was cultured in PBS supplemented completed with 10% autologous serum and Epo (33.4 IU/mL; Recormon, Roche Diagnostic, Germany) in T75 tissues flasks (TPP) (Switzerland) during 60 minutes in CO2-incubator. After precondition BM-MNCs were twice washed with PBS.

The following antibodies were conjugated with fluorescein isothiocyanate (FITC), phycoerythrin (PE), or allophycocyanin (APC): anti-CD45 as a pan-leukocyte marker, anti-CD34 as a hematopoietic progenitor marker, anti-CD31 as a platelet endothelial cell adhesion molecule-1, anti-CD184 as a C-X-C chemokine receptor type 4, anti-CD73 as a 5'-nucleotidase, anti-CD90 as a Thy-1, anti-CD105 as a Endoglin, anti-CD131 as a Cytokine receptor common subunit β, anti-CD144 as a Cadherin 5, type 2 or VE-cadherin (vascular endothelial cadherin) from Becton Dickinson, anti-CD133 as a prominin-1, anti-KDR (kinase insert domain receptor) as a vascular endothelial growth factor (VEGF) receptor 2 from Abcam, and anti-EpoR as a erythropoietin receptor (EpoR) from Sigma. Sample suspensions were adjusted to 106 cells/mL and incubated on ice with the appropriate antibody for 20 min, washed twice, and were re-suspended in 0.5 mL 1% bovine serum albumin in PBS. Dead cells were excluded by electronic gating and 30,000 gating events were analyzed for each sample. Three-color immunofluorescence analysis was used for the identification of BM-MNCs. Data acquisition and analyses were performed on a fluorescence-activated cell sorter CantoII with Diva software (BD Bioscience, San Jose, CA, USA).

Cell cycle distribution and measurement were performed by flow cytometry. To this order, 1x106 BM-MNCs/mL before and after precondition with Epo (33.4 IU/mL; Recormon, Roche Diagnostic, Germany) were washed with cold PBS and fixed in 70% ethanol (-200C) at 40C. After 2 hours, fixed cells were pelleted and stained with Propidium iodide (20 µg/mL) in the presence of Ribonuclease (RNAse) A (100 µg/mL; Sigma-Aldrich, Germany) for 30 minutes at 370C, and about 104 cells were analyzed using a fluorescence-activated cell sorter Canto II and data were analyzed by using Diva software.

The apoptosis assay was performed using an Annexin V-FITC/PI Apoptosis Detection kit (BD Bioscience, San Diego, CA, USA). The untreated and treated with Epo (33.4 IU/mL) BM-MNCs were washed with Annexin binding buffer and centrifuged three times at 800 g for 5 minutes. Next, 100 µL of binding buffer were added and incubated with 5 µL of Annexin V-FITC and 5 µL of Propidium iodide for 20 minutes in the dark at room temperature. After a last step, the samples were analyzed using a flow cytometer (FACS Canto II, BD Bioscience, San Jose, CA, USA) and data was analyzed by using Diva software. Alive cells grouped in the lower left part of the panel, early apoptotic cells grouped in the lower right part of the panel, and late apoptotic cells grouped in the higher right part of the panel.

Conditioned media from 2x105 cells/well of BM-MNCs incubated in a 96-well plate in DMEM supplemented by 10% FCS, 2 mM L-glutamine, and antibiotics, and Epo (33.4 IU/mL) was collected 72 hours later, aliquoted and storage at -700C before using in testing in vitro.

EA.hy 929 cells (gifted by Dr. C.J. Edgel, Caroline University, USA) were grown to 80-90% confluence in a 96-well plate, and incubated in medium containing 1% FCS overnight. EA.hy 929 monolayer were scratched with a 200 μL pipette tip, washed to remove debris and cultured in 100 µL of DMEM containing 10% FCS (positive control), in mixture of 70% DMEM and 30% of conditioned media from BM-MNCs growth in the presence or absence of Epo (experimental wells), and in 100 µL of DMEM with 0% FCS (negative control), the incubated at 370C in CO2-incubator for 24 hours. Images were observed using an inverted contrast microscope (Zeiss, Germany).

The formation of vascular-like structures (tube formation) by EA.hy 929 cells was assessed on In vitro angiogenesis assay kit (Abcam, USA). EA.hy 929 cells were seeded on Matrigel-coated 96-well plates at 2x104 cells/well in 100 µL of DMEM containing 10% FCS (positive control), in mixture of 70% DMEM and 30% of conditioned media from BM-MNCs growth in the presence or absence of Epo (experimental wells), and in 100 µL of DMEM with 0% FCS (negative control), the incubated at 370C in CO2-incubator for 24 hours. Capillary-like structure formation images were observed using an inverted contrast microscope (Zeiss, Germany).

The obtained results were processed by statistical software package Statistica 10.0. Data presented as median with lower and upper quartiles – Me (LQ, UQ). We use Mann-Whitney U test for pairwise comparisons of studying data. Statistical significance was assumed at a value of p<0.05. Correlations analysis was performed by Spearman rank correlation.

Table 2. Effect of treatment with erythropoietin on BM-MNCs properties

These findings implicate that this short-time treatment of BM-MNCs with erythropoietin enhanced the count of CD31+/CD184+ EPCs and CD45+/EpoR+ HSCs, arrest CD34+ in G0G1, and no have stimulated proliferative activity of BM-MNCs.

Paracrine effect of BM-MNCs on EA.hy 929 formation of vascular-like structures and wound healing

These finding indicate that Epo therapy of BM-MNCs possess increased production of cytokines and growth factors that can promote proliferation and vasculogenesis by mature EPCs. 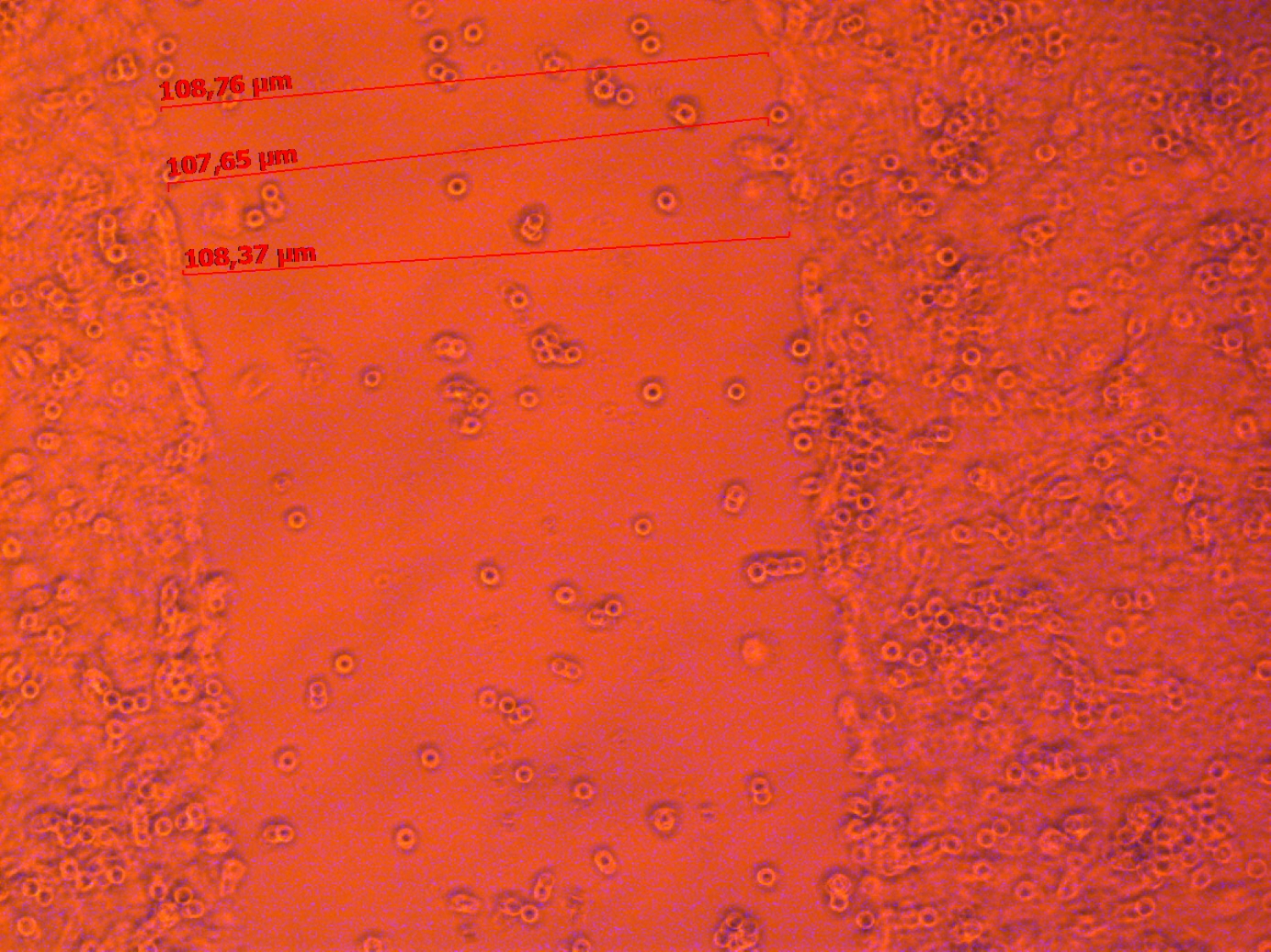 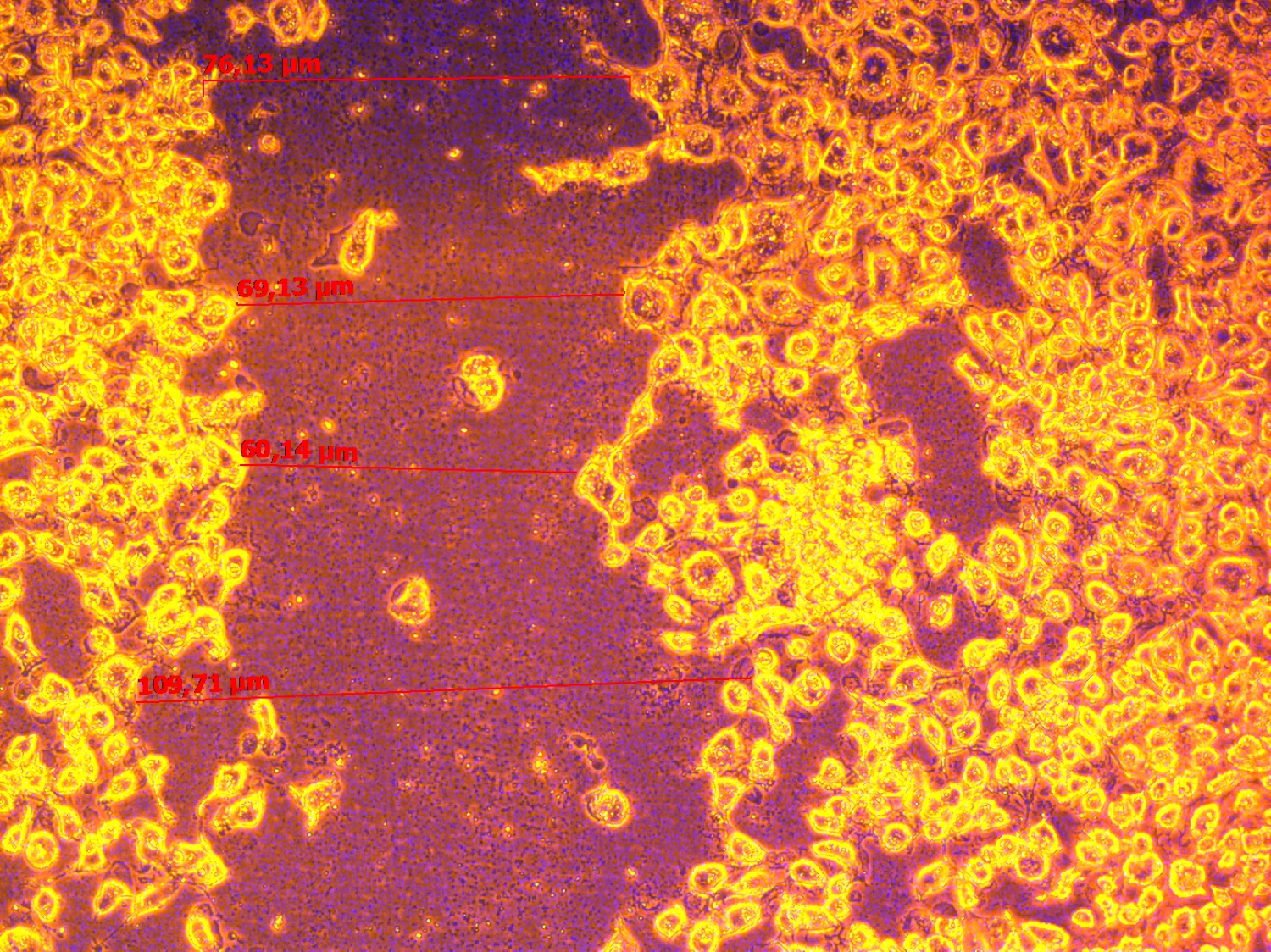 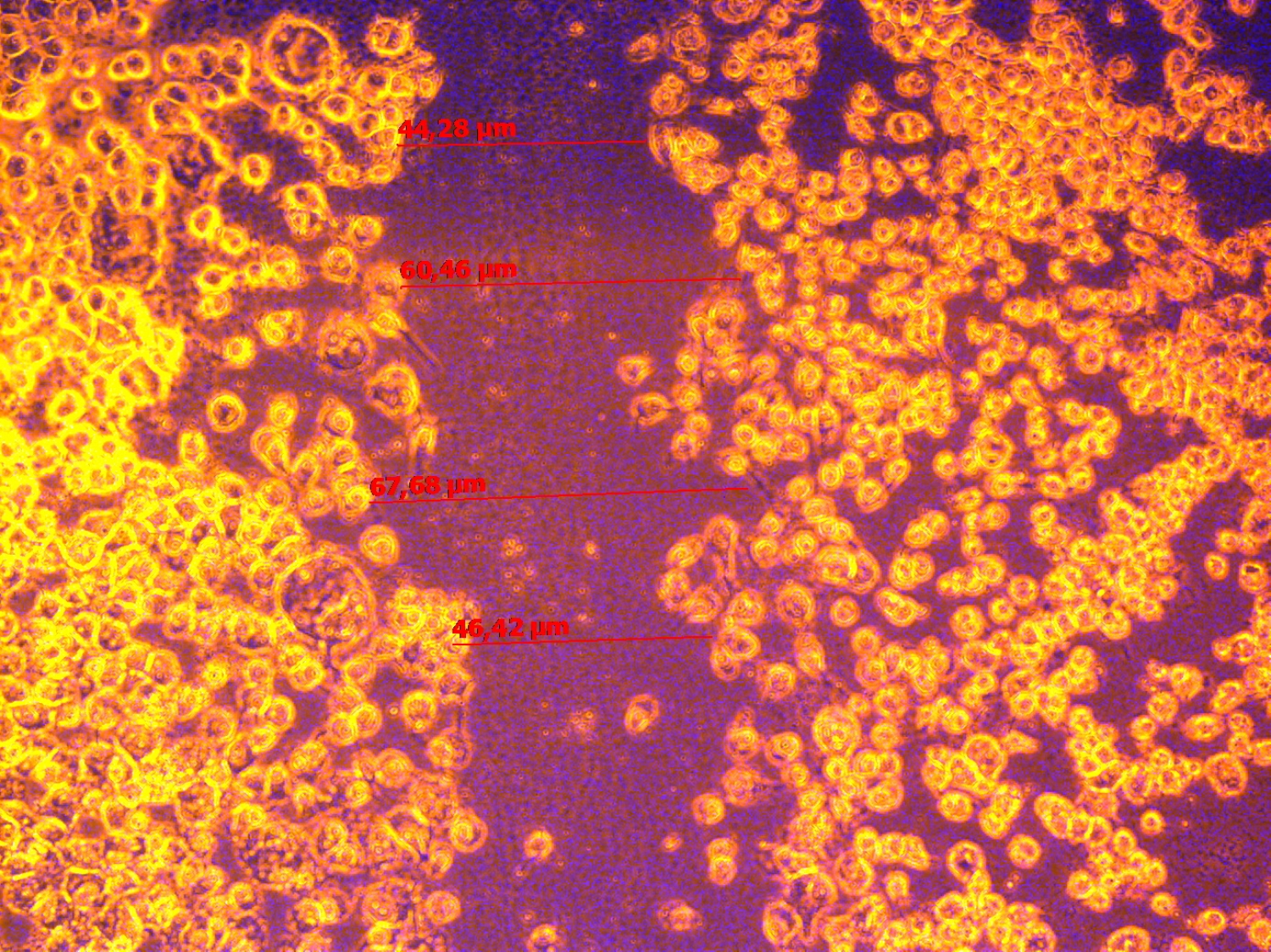 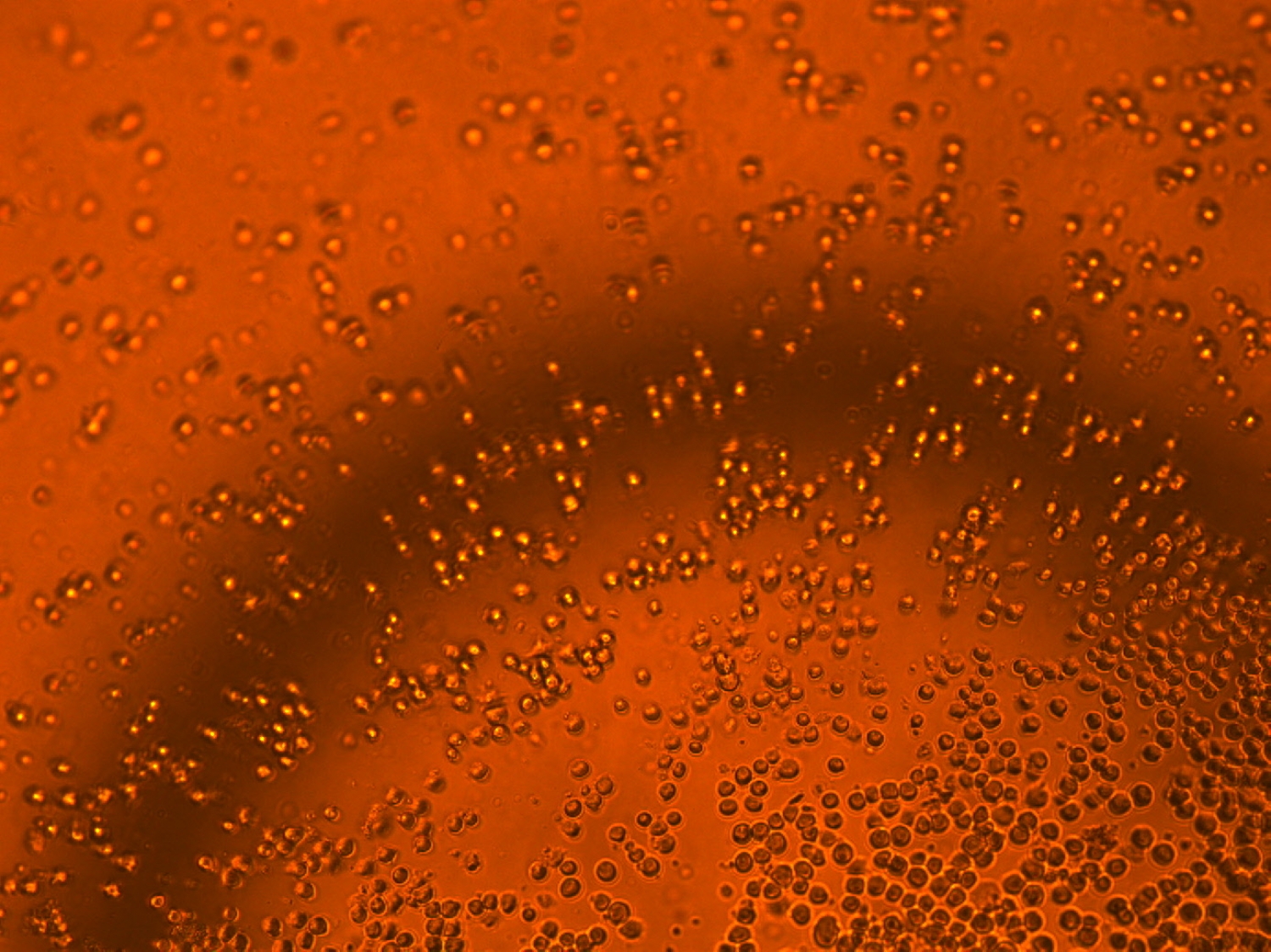 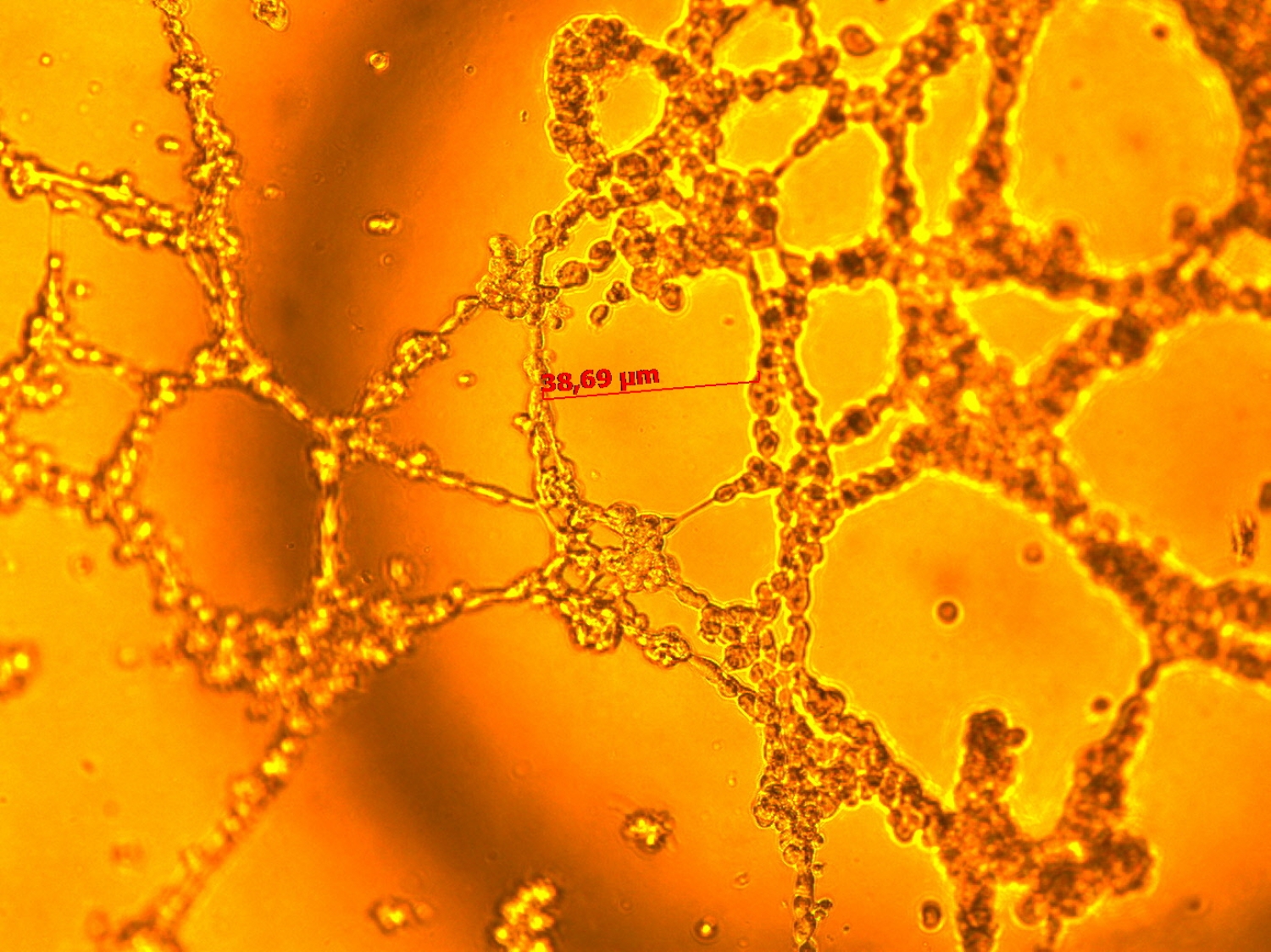 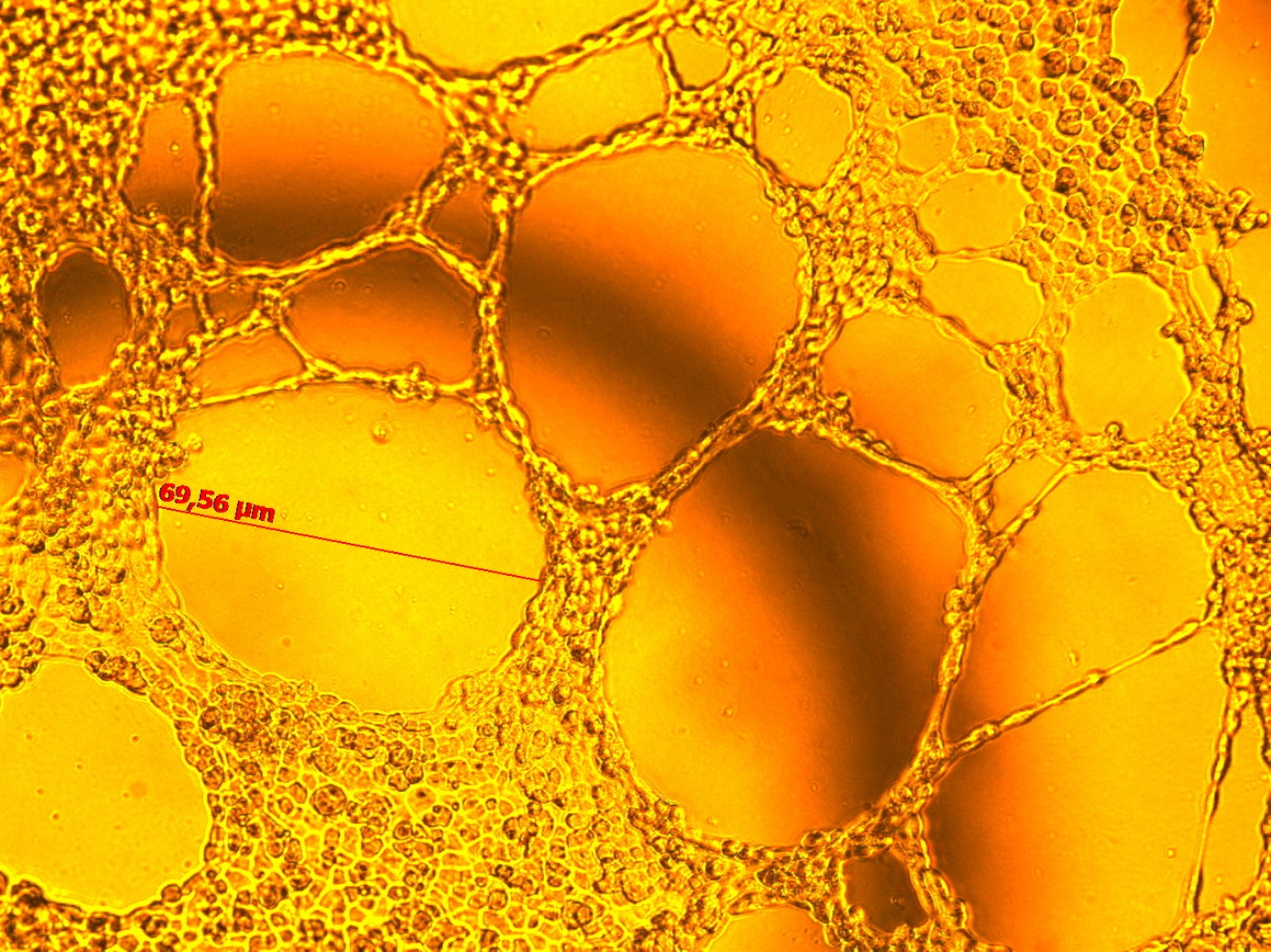 Through this study we have showed the beneficial effect of in vitro Epo treatment to increase the vasculogenic potential of human bone marrow stem cells. By Epo treatment BM-MNCs increased count of EPCs with CD31+/CD184+ phenotype, increased a count of CD34+ cells in G0G1 phase of cell cycle, increased vasculogenic effect of conditioned media from Epo treated BM-MNCs on tube formation by EA.hy 929.

These findings strongly suggest that in vitro Epo treatment of BM-MNCs can be a feasible and effective method to augment the efficacy of BM-MNCs stem cells therapy for patients with CAD.

Ischemic heart failure (IHF) is an important cause of morbidity and mortality [1-2]. The main reason of IHF development are myocardium infarct, because structural remodeling of a myocardium is associated with inflammation, formation of scar, and development of interstitial fibrosis in peri-infarct zone and remodeling of blood supply of a myocardium [8]. Bone marrow mononuclear cells contain EPCs and MSCs valuable in stem cell therapy to enhanced postischemic neovascularization [9-11].

Numerous clinical trials have previously investigated the clinical outcomes in patients after myocardium infarction and reported significant efficacy in improving contractility and reducing infarct scar [2-4, 8, 10-11]. But the problem was the limited efficacy: improvement of levft-ventrcular ejection fraction and reduction of infarct size, viability of stem cells. Under this situation, precondition of the adult stem cells before implantation would be a very feasible and safe way to augment the therapeutic efficacy.

Epo, cytokine that controlled erythropoiesis, also appears to have pleiotropic effects, such as anti-ischemic and anti-apoptotic properties, promotion of neovascularization, mobilization of EPCs, and enhancement of angiogenesis [12].

First of all, we established that in bone marrow of patients with CAD present three main stem cells populations (HSC, EPCs and MSCs). Moreover, BM-MNCs presented a higher number of ‘early’, and a lower number of ‘late’ EPCs (CD34-/CD133+, and CD34+/CD133- cells, respectively). Also, in BM-MNCs from patients with CAD presented ‘mature’ EPCs (CD34+/KDR+, and CD34+/CD31+ cells). Moreover, BM-MNCs from patients with CAD is characterized as a high proliferating cells, because a 12% of CD34+ cells are in G2/M phase of cell cycle and spontaneous proliferation measured by MTT test were OD=0.66. Moreover, we observed that among CD34+ BM-MNCs very low number of cells is apoptotic cells.

Ahmed and coworkers (2015), also Hur and coworkers (2004) demonstrated that EPCs expressed CD34 or VEGFR-2(KDR), and EPCs, which carried both surface markers (CD34+/KDR+ EPCs) is an independent predictor of clinical performance at cardiovascular pathology [13-14].

Bone marrow cells can migrate from niches into blood stream through “homing” involve CXCR-4 (CD184), a specific receptor for the SDF-1/CXCL12, and CD144 to engraftment onto target organs, include ischemic tissues [15]. The results of presented study show that a large number of HSCs and EPCs expressed CD184, whereas CD144 expressed only on 0.3% of EPCs. Moreover, Epo treatment of BM-MNCs increased a count of EPCs co-expressed CD31 and CD184 surface markers.

It is well known, that EpoR expressed on surface not only of erythroid progenitor cells, but also on other type of cells [16-19]. Epo maintains survival of different type of cells through interaction with EpoR [16-17]. Epo binding with EpoR alone or in cooperation with CD131, and possess cytoprotective effect [19].

Bennis and coworkers (2012) demonstrated that Epo in dosage 5 IU/mL stimulate proliferative potential, migration, tubule-formation capacity, closure of wound made in monolayer of EPCs, and increased resistance of EPCs to oxidation stress [19]. The unfavorable microenvironment present in the ischemic tissue might impair the effectiveness of stem cell transplantation. Additionally, the results of presented study shown that Epo treatment of BM-MNCs prevent from oxidative stress (proliferative activity of Epo treated BM-MNCs in the presence of H2O2).

Taken together, the presented study demonstrated that Epo has the potential to augment regenerative effect of BM-MNCs.

In this paper, we present an in vitro model of BM-MNCs Epo priming augmented vasculogenic potential. Bone marrow cells from patient with CAD are characterized by presence of heterogeneous stem cells subsets (HSCs, EPCs, and MSCs) with a higher proliferation activity, and formation of vascular-like structures capacity. Treatment BM-MNCs with Epo possess accumulation of CD34+ cells in G0G1 phase of cell cycle and increased a count of CD31+/CD184+ EPCs.

The authors thank Ekaterina A. Lykova for her helping in translation on English.

Authors declare no conflict of interest.

All procedures performed in studies involving human participants were in accordance with the ethical standards of the Ethics Review Board of the Meshalkin National Medical Research Center (Novosibirsk, Russia) and with the 1964 Helsinki declaration and its later amendments or comparable ethical standards.