Pseudomonas aeruginosa is aubiquitous environmental bacterium. It is considered as one of the important opportunistic human pathogens, causing serious problems in food sectors. This bacterium was isolated from different surfaces [1, 2]. It has the ability to attach to a variety of them, including the food processing environment, and form biofilm [3, 4]. This latter is defined as a biologically active matrix of cells and extracellular substances in association with a solid surface [5], and it is more resistant to sanitizing and antimicrobial agents [3]. The adhesion is considered the key step of biofilm formation and it is widely studied especially on the food contact surfaces [6-10]. This adhesion and consequently biofilm formation might be affected by physicochemical characteristics of the surfaces [11, 12], and by its topography and roughness [4, 13].

Cleaning and disinfection are the key way to prevent the contamination of the food contact surfaces and consequently food products. Moreover, the contamination of food-contact surfaces might lead to the persistence of pathogens in food processing environments [14], which must be a significant public health impact [15]. Several chemical agents were tested against biofilms of various microorganism cells such as peracetic acid [14, 16-19] and hydrogen peroxide [20]. The first one showed the ability to eliminate approximately 98% and 99% of viable S. aureus and P. aeruginosa, respectively, after 1 min as contact time but not the biofilm matrix [14], while the second one is considered an efficient disinfectant against biofilms [21]. In addition, Ozone was also evaluated against biofilm in many studies [22-26], which cannot lead to microorganism resistance [27].

The efficiency of disinfection operation depends on the microorganism, the disinfectant, the concentration of disinfectant, the contact time, the pH, the temperature, etc. The relationship between the concentration of the disinfectant and the contact time should be considered to achieve a determined reduction of the microorganism [28, 29]. Sodium hypochlorite is one of the chemical compounds used for bleaching or disinfecting different things including surfaces. Numerous works were done about its efficiency against biofilms [30-32] and contradictory results were obtained. Sodium hypochlorite was reported to be an effective disinfectant for biofilm inactivation [33].

Different methods are applied to quantify the number of adhered bacteria and the remained ones after treatment. These methods include McFarland turbidity test [18], swabbing method [34], microplate absorbance measurement [18], and plate count method. For this latter many techniques are used for biofilm dislodging from a surface such as ultrasonic [34, 35], shaking with beads [18] and vortexing [37]. In addition to that, many other techniques are used for biofilm visualization including epifluorescence microscopy [9, 37-39], scanning electron microscopy [35, 36, 40] and atomic force microscopy [41, 42]. Based on our best knowledge no study has compared between plate count method and atomic force microscopy.

The bacterium used in this study was Pseudomonas aeruginosa. This bacterium was isolated from a stainless steel surface, after cleaning and disinfecting procedures. The bacterium was grown at 37°C for 24 hours on Luria Bertani agar. This medium was made using the following components; 10 g tryptone, 5 g yeast extract, 10 g NaCl and 15g agar, and one liter of distilled water. After 24 hours of incubation, bacterial cells were scraped off the agar plates and harvested by centrifugation at 6500 rcf for 15 minutes. Cells pellets were resuspended in KNO3 (0.1M) and adjusted by spectrophotometer to an optical density wave length angle of 600 nm of optical density approximately between 0.7 and 0.8 corresponding to 108 CFU/ml.              .

The size of two types of stainless steel (316 / 304) surfaces was 1 cm per 1 cm. These surfaces were immersed in the solution of absolute ethanol for 15 minutes. Then rinsed three times with distilled water, and they were autoclaved at 121°C for 20 minutes [43, 44].

The disinfectant selected for this study was sodium hypochlorite (NaCLO), at four different concentrations which are 0.5 %, 1 %, 1.5 %, and 2 %.

The sterilized surfaces were immersed in the Petri dishes containing the bacterial suspension, for 3 hours at 25°C. After, the surfaces were rinsed three times by distilled and sterilized water to remove the non-attached bacteria. Then the surfaces were placed in Luria Bertani broth and incubated at 25°C for 24 hours [18, 39, 45, 46]. Three replicates were carried out for each experiment and only the numbers of colonies between 30 and 300 are included in the calculation of the number of the bacteria adhered to two stainless steels.

The surfaces colonized by P. aeruginosa were rinsed three times to remove the non-adhered cells. Then, they were placed in Petri dishes containing sodium hypochlorite already prepared at diverse concentrations (0.5%, 1%, 1.5% and 2%). After 5 min of contact, the surfaces were rinsed 3 times. They were after placed in the glass tubes containing 10 mL of sterile physiological saline, and sonicated at 35 kHz for 10 min and vortexed [4, 35]. To quantify viable cells, bacteria were resuspended, serially diluted 10-fold with sterilized physiological saline and cultured on nutrient Agar at the temperature of 37°C for 24 hours [45, 47, 48]. Three replicates were carried out for each experiment.

The topography images and roughness of both stainless steels colonized by P. aeruginosa biofilm and treated with sodium hypochlorite at different concentrations (0.5 %, 1 %, 1.5 %, and 2 %) were measured using Atomic Force Microscopy (Nanosurf flex AFM). The measurement was carried out with an easy scan 2 controller from Nanosurf. The tapping mode (Dynamic) in an ambient air environment was used for scanning and measuring. The Ra value, which is the arithmetic mean deviation of profile, is the most commonly used descriptor of surface roughness [49]. The Ra value was determined using the software easy scan 2 (three replicates). 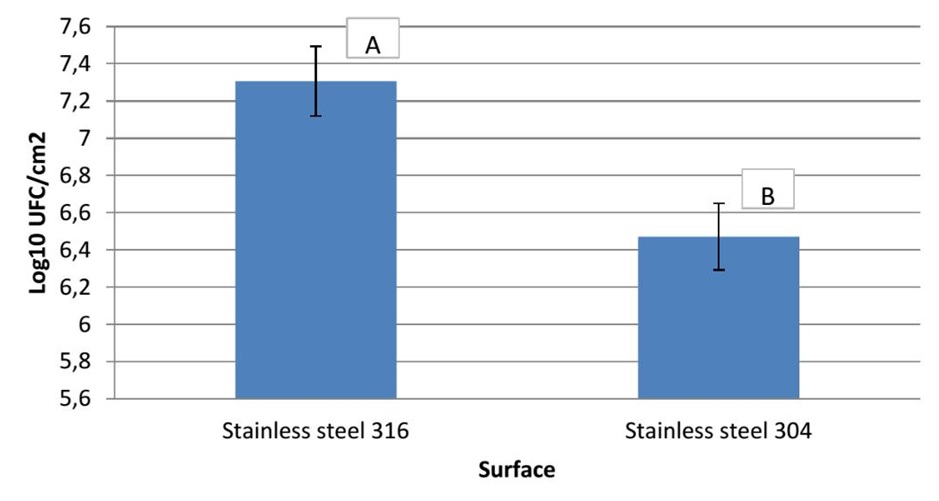 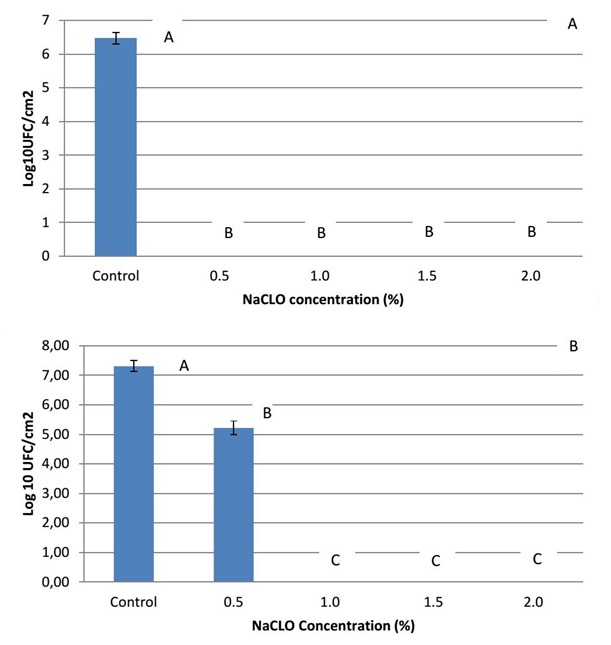 Figure 3. Number of biofilm cells adhered to stainless steel 304 [A] and 316 [B] after sodium hypochlorite treatment. The Control represents the surface colonized with Biofilm.

The P. aeruginosa biofilm formation was also assessed using AFM which confirms that this bacterium has the capacity to stick and form a biofilm on both stainless steels. This result is in agreement with the ones reported by other authors using AFM [42, 59] and scanning electron microscopy [20].

The efficiency of sodium hypochlorite against P. aeruginosa biofilm formed on stainless steel surfaces was evaluated using AFM and PCM which pronounced opposite results. The absence of bacterial cells after sodium hypochlorite treatment in the case of the plate count method could be explained by the fact that bacteria might be dead, injury or none cultivate after treatment. Cabeça et al. [35] evaluated five disinfectants against biofilms cells by using plate count method and scanning electron microscopy, and they showed that sodium hypochlorite was the most effective disinfectant against these biofilms compared to others such as biguanide and peracetic acid. While, their results obtained by scanning electron microscopy observations revealed that the bacteria still adhered to stainless steel after all concentrations treatment which is in agreement with our findings. Wirtanen et al. [60] reported that chlorine-based disinfectant was efficient against biofilms of Pseudomonas aeruginosa and Pseudomonas fragi formed on stainless steel 304, by using conventional cultivation, impedimetry and epifluorescence microscopy. In addition to that, the coverage of this surface by the biofilm was decreased better after this treatment. Other studies also investigated the efficiency of disinfectants such as peracetic acid, chlorhexidine, benzalkonium chloride, alkyldiaminoethyl glycine and sodium hypochlorite against biofilm cells [18, 61-63]. Takeo et al. [62] reported that eradication of P. aeruginosa biofilm cells by disinfectants required more time than that in suspension and that the increasing concentration of disinfectant raised the antimicrobial effects against biofilm cells. Whilst, Martin-Espada et al [18] evaluated the peracetic acid by microplate absorbance measurements and McFarland turbidity. Their results showed that peracetic acid kills 100% of Pseudomonas aeruginosa biofilm installed on polystyrene at the concentration of 1.61% after 15 min of treatment.