The left internal thoracic artery (LITA) has proved to be an excellent conduit as a bypass graft because it has had a better long-term patency rate than other grafts (saphenous vein, radial artery) [1, 2]. Angiography is considered the gold standard for graft assessment, however besides being an invasive and costly test, LITA angiography can be painful for the patient, adds to the risk contrast induced nephropathy. Noninvasive methods (like transthoracic Doppler) for assessment of LITA graft patency may be intermediate procedure before angiography and can preclude need of angiography. The role of recurrent graft Doppler assessment may be more important in patient after CABG (coronary artery bypass grafting) with angina and ECG ischemic changes on the left ventricular anterior wall leads [3, 4].

Comparison between groups was performed using the following parameters: age, body mass index, angina class, presence of hypertension and diabetes, left ventricular ejection fraction and hemoglobin level, hemodynamic parameters during the Doppler investigation. All compared patients were male. The significant difference between groups was seen only by age, since we prefer to perform composite arterial grafting in young age patients to expect better long patency rate.

LITA was harvest as skeletonized conduit in all patients. Rigth internal thoracic artery (RITA) was harvested skeletonized as a free graft. The LITA graft was always anastomosed to the LAD. In 5 cases LITA was used for revascularization the diagonal branch also by side to side anastomosis. Composite Y-graft was constructed by anastomosing proximal end of RITA to LITA graft at the level of left atrial appendage before starting cardiopulmonary bypass. The RITA graft was used for revascularization the diagonal (n=1), intermedia (n=1), obtuse marginal (n=10) and posterior descending arteries (n=3). The distal and Y anastomoses in all of cases were performed with 8-0 polypropylene running suture.

The dichotomic variables were compared by Chi square Pearson test, other variables which are not in normal distribution range assessed by Mann-Whitney U test. Outcomes showed in box-plot graphics.

It is known from the literature [9, 10] that Doppler evaluation of LIMA graft patentcy is performed by measuring and calculating peak velocity diastolo-systolic (dVp/Vp) (Fig. 4) and velocity flow integral diastolo-systolic ((dVFI/(dVFI+VFI)) x 100) ratios (Fig. 5). In our study we compared those parameters for both groups. No significant difference was found between two groups. 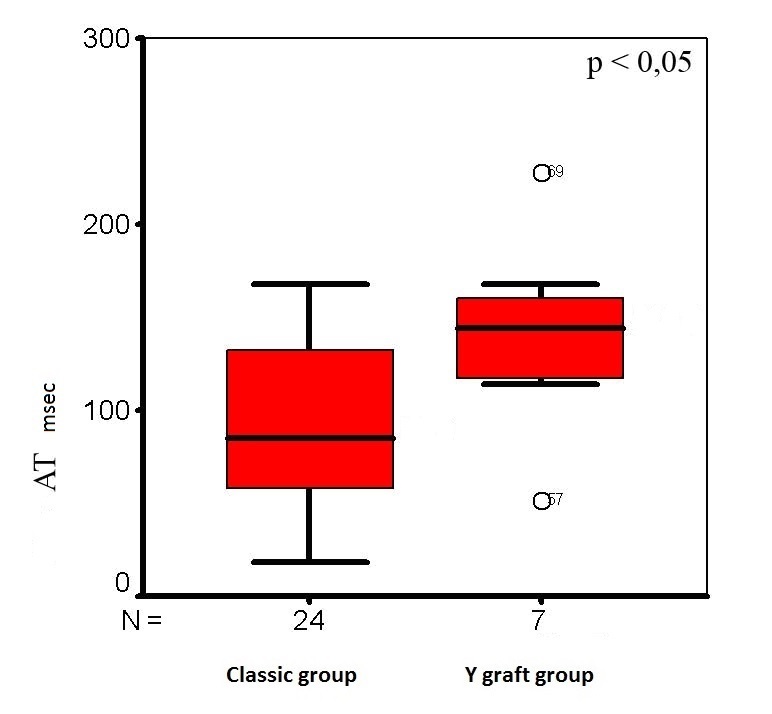 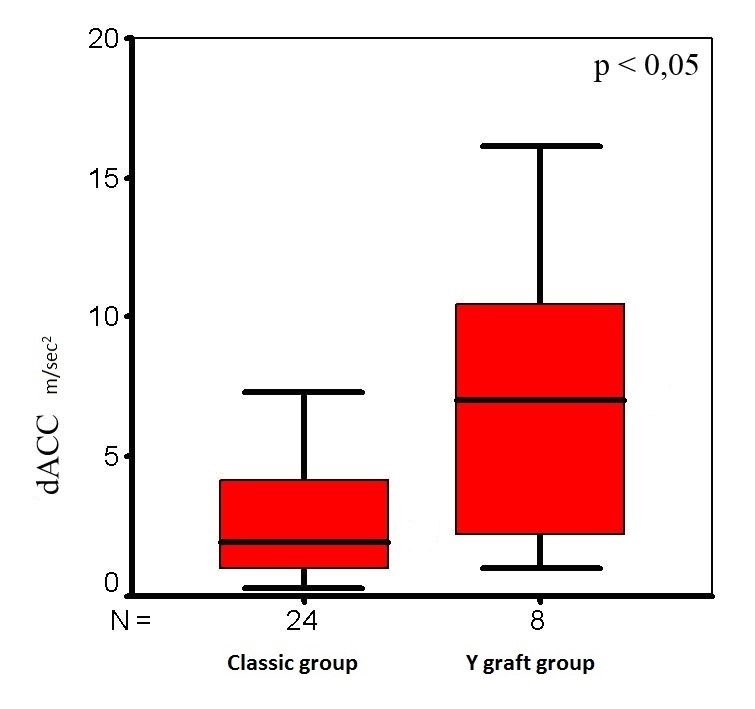 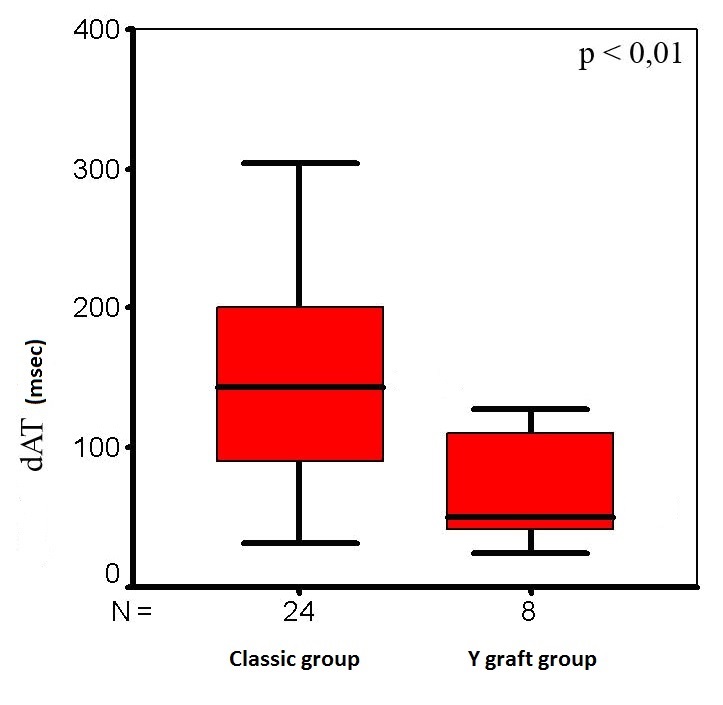 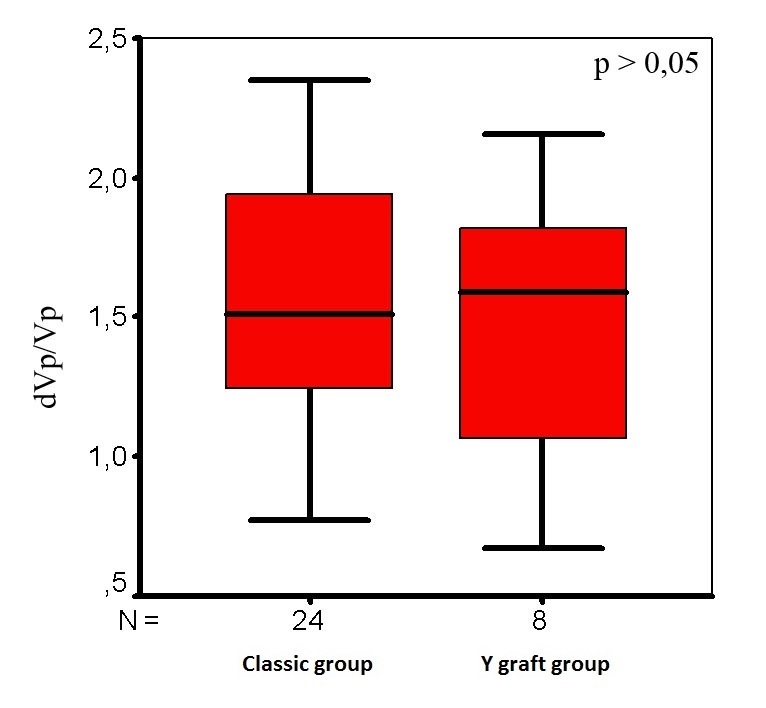 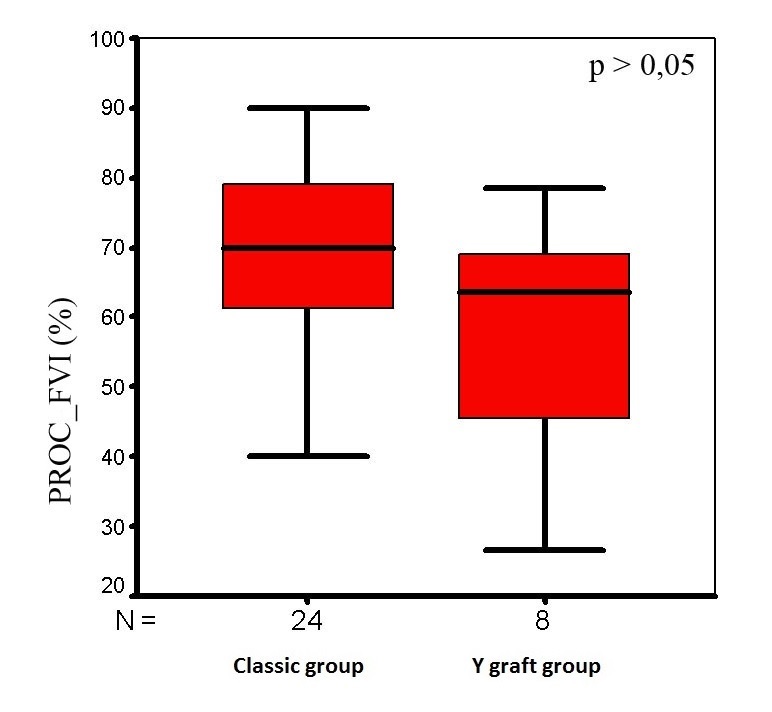