In vivo antimicrobial inhibition of Punica granatum extracts as mouthwash

romj-2017-0403.pdf
Abstract:
Background — Complex polysaccharides have been detected and characterized in Punica granatum or pomegranate constituents who may act as fungal and bacterial inhibitor as well as an anti-inflammatory effect. However, limited studies were reported on using pomegranate extracts as an anti-bacterial mouthwash. Objectives — To determine the effect of Punica granatum (pomegranate) extract on microbial activity of some bacterial genus isolated from the mouth. Material and Methods — This study included preparation of three different concentrations of Punica granatum methanolic extract of 25%, 50%, and 75%. The inhibition activity of these extracts was tested on different strains such as Sm, Sa, Ec, Kp, Sg and Sf. Results — Results exhibited an effective inhibition of pomegranate extracts against most of the tested strains which were isolated from patients' mouths. The 50% and 75% concentrations of methanolic extract exhibited significant inhibition against four tested strains compared to mouthwash (P≤0.05), while the 25% concentration was less effective than the other concentrations and its antibacterial effect was non-significant in comparison with the mouthwash. Conclusions — This study indicates the inhibitory effectiveness of Punica granatum extracts of high percentage on microbial activity of some bacterial genus isolated from patients’ mouths and suggests the possibility prepare a mouthwash from pomegranate extract.
Keywords:
Punica granatum extract, microbial activity, inhibition, mouthwash, isolated bacterial genus
Cite as:
Al-Obaidi DM, Muhsin SA, Ibrahim AA. In vivo antimicrobial inhibition of Punica Granatum extracts as mouthwash. Russian Open Medical Journal 2017; 6: e0403.

On the basis of their medicinal properties herbs have been used in traditional medicine for many years and reported phytochemical and pharmacological studies support their traditional usage and they have also proved to be useful for clinical studies and development of commercial drugs [1-3].

Several medicine systems have been used the Punica granatum (pomegranate) for its therapeutic properties and indicated antibacterial activity as among its biological properties [4-7]. The pomegranate or Punica granatum is the predominant member of two species comprising the Punicaceae family [6]. It is considered as "a pharmacy unto itself" and is used as an anti-parasitic agent [5, 8]. Historically, the pomegranate was used in different areas of systematic medicine and with variable elements, for example in Ayurvedic blood tonic [9], and to heal apathy, diarrhea, and ulcers.

The potential therapeutic properties of pomegranate are wide-ranging and include treatment and prevention of cancer, cardiovascular disease, diabetes, dental conditions, erectile dysfunction, and protection from ultraviolet (UV) radiation. Other potential applications include infant brain ischemia, Alzheimer's disease, male infertility, arthritis, and obesity [10]. Furthermore, pomegranate constituent applications have been used for their anti-inflammatory properties to treat dental conditions, bacterial infections, antibiotic resistance, diarrhea dysentery and intestinal parasites [11-13], in addition to the use of antimicrobial properties of the juice against E. coli, Bacillus subtilis [11].

Pomegranate peel is recognized for its many health promoting qualities and apparent wound healing properties [14]. Extract of Punica can be used as a germicide especially in vaginal infection and treatment of some intestinal worms [15-17]. Pomegranate peels have been recognized for their significant health promoting qualities and healing properties, and are considered as important dietary sources of antioxidant phenolics. Moreover, evidence was reported of the presence of antimicrobial phenol compounds, and extract of Punica grantum cortex has exhibited inhibitory activity on the growth of some pathogenic bacteria isolated from the human stomach and intestine [18].

Pomegranate trees typically grow to a height of 12-16 feet, have many spiny branches and can be extremely long-lived, as evidenced by trees in Versailles, France, known to be over 200 years old. The leaves are glossy and lance-shaped, and the bark of the tree turns gray as the tree ages. The flowers are large, red, white, or multicolored and have a tubular calyx that eventually becomes the fruit. The ripe pomegranate fruit can be up to five inches wide, with deep red and leathery skin, grenade-like in shape and crowned by the pointed calyx. The fruit contains many seeds separated by white, membranous pericarp, each of which is surrounded by small amounts of tart red juice [19]. The botanical name is Punica granatum, family name: Puniacaceal; common name: Pomegranate; and the seeds, flowers, and peels are the parts used in medicine [11-13]. Chemically pomegranate consists of eicosanoic, linolenic, conjugated, linolenic alpha, oleic, palmitic, punicic, stearic, citric and malic acids, phenolic compounds such as gallic, coumaric acid, catechin, phloridzin and quercetin, protocatechuic, chlorogenic, cafeic, and ferulic acid. The most therapeutically beneficial pomegranate constituents are ellagic acid, ellagitannins (including punicalagin), punicic acid, flavonoids, anthocyanidins, anthocyanins, and estrogenic flavonols and flavones [3]. The cortex of pomegranate contains alkaloids, tannins, phenols, flavonoids and saponins [20]. Punica peels contain glycosides and gall of pelletierine fungal and bacterial growth inhibition, the antimicrobial activity of pipe various degrees of inhibition against the growth of investigated microorganisms [21, 22]. Complex polysaccharides have been detected and characterized in the peels [23]. Therefore, this study aims to determine the effect of Punica granatum (pomegranate) extract on microbial activity of some bacterial genus isolated from the mouth.

Slices of the peel of 2 mm thickness were peeled from the external surface of Iraqi pomegranate fruit. The peels were dried in the shade for 30 days, ground and sieved into powder using a 250 µm grit size sieve (Fieldmaster®, USA). The dried powder was extracted using methanol solvent [24]. Chlorhexidine gluconate mouthwash (Corsodyl®-GlaxoSmithKline, UK) was used as a control group.

An extract solution was prepared using 100 ml of methanol solvent liquid (AnalaR Normapur® VWR, UK) that was added to 25 g of pomegranate peel powder with shaking. The solution was left for 24 h for maximum powder dissolution in the solvent methanol.  Then the mixture was filtered using Cellulose Filter Paper of grade 2 and 90 mm diameter (Whatman®, England) to achieve an extract solution of 25%. The procedure was repeated with 50 g and 75 g of pomegranate peel powder to gain extract concentrations of 50% and 75%. An agar well diffusion method of 8 mm diameter cups was used to test the antimicrobial effect of these concentrations.

Different strains were used in the study such as Staphylococcus mutants, Staphylococcus aureus, Escherichia coli, Klebsiella pneumonia, Streptococcus gaseous and Streptococcus faecalis. Swabs were collected from patients suffering from caries and gingivitis, and the bacteria strains were isolated and diagnosed in the College of Science at Baghdad University (Baghdad, Iraq).

MHA (Mueller-Hinton Agar) medium (HiMedia, UK) was used [25, 26]. The medium was dehydrated, sterilized in an autoclave at 121°C for 15 minutes, poured into sterilized Petri dishes and allowed to set; the plates were then stored at 4-10°C in the refrigerator.

The antibacterial activity was tested using agar well method (n=3). The dried plates were inoculated with test strains uniformly over the surface using a sterile cotton swab. 8 mm discs made by Cork Borer (Abron, UK) were loaded with the prepared extract and control solution, and after drying the plates were incubated at 37°C for 24 h. The zone of inhibition of bacterial growth around the disc was measured in millimeters and recorded [27, 28]. Each plate contains 4 inhibition zones and the tests were repeated three times and the average diameter of the inhibition zone was recorded.

The statistical methods used to analyze the results of this study included analysis of variation (ANOVA-Tukey and Gemes Howel tests) [29]. The tests performed at a confidence level of 95% (P<0.05). 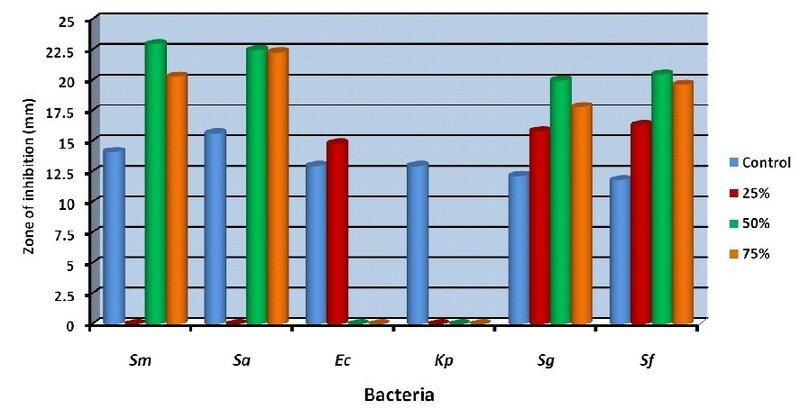 Generally, there were statistically significant differences (P<0.05) with all the Punica granatum extract concentrations and they were more effective than the mouthwash, particularly against the growth of Streptococcus gaseous.

All concentrations of the extract were more effective than the mouthwash, with significant differences against Streptococcus faecalis bacteria, the higher concentration having a significantly larger inhibition zone at (P<0.05). As indicated in other studies’ findings, the significant inhibitory effect of pipe could be increased by increasing the concentration of alcoholic extracts [21, 22]. The highest inhibition was obtained for E. coli. On the other hand, the mouthwash was more effective in its inhibitory action against Klebsiella pneumonia, whilst the extract had little effect.

Medicinal plants still play a vital role in meeting basic health needs in developing countries. Nearly 80% of the world’s population rely on traditional medicine for primary health care, most of which involves the use of natural products, and plants continue to be a rich source of therapeutic agents [30-32]. Many researchers have conducted extensive studies of the biological properties of Punica granatum and their results showed that this plant is ethno medically valuable [24, 33]. The extent of the inhibitory effect of the pomegranate extracts could be attributed to the phenolic and anthocyanin content of the fruit. The bioactivity of Ariel extracts on the microorganisms tested exhibited high total flavonoid, phenolics, anthocyanins and organic acid concentration [34]. Tesaki et al. confirmed that phenolics were the most important compounds against bacteria, and among the Gallic acid was identified as the most active compound for inhibition of bacteria [35].

The results of the present study could verify the antibacterial potential of pomegranate and its use as traditional medicine. Pomegranate peels may have used in alternative health therapies; including medicines derived from plants, which have the advantages of being easily available and cheaper than modern medicines. However, further studies using different solvents are needed to estimate the antimicrobial effect of pomegranate.

Authors are the only researchers that responsible and self funded for this paper manuscript. We are the author’s state that the manuscript for this paper is original, and it has not been published previously and is not under consideration for publication elsewhere, and that the final version has been seen and approved by all authors.