romj-2020-0310.pdf
Abstract:
Objective — Assessment of phosphodiesterase-4 inhibitor (apremilast) therapy’s influence on skin cytokine levels in patients with moderate-to-severe and severe psoriasis. Material and Methods — An open, uncontrolled study was conducted. 16 patients with plaque psoriasis (13 men, 3 women; mean ± standard deviation (SD) age 35.1±9.7 years, range 21-60) were enrolled. The mean Psoriasis Area and Severity Index (PASI) was 20.7±8.93 (range 10-47). All patients were prescribed apremilast 30 milligrams (mg) per os (PO) Bis In Die (BID). The efficacy of therapy was evaluated by PASI at 14 and 26 weeks of therapy. Lesional skin samples were collected at baseline and weeks 14 and 26. Levels of interleukin (IL)-1β, IL-4, IL-6, IL-10, IL-17A, IL-17F, IL-21, IL-22, IL-23, IL-25, IL-31, IL -33, interferon (INF)-γ, Soluble CD40-ligand (sCD40L), tumor necrosis factor (TNF)-α were measured by microsphere-based suspension array technology (Luminex® xMAP™ system). Results — Levels of cytokines (except IL-4 and IL-33) in lesional skin samples were found to have decreased at week 14 compared with those at baseline. Similar decreases were seen for IL-23, IL-25, IL-31, sCD40L at week 26. In contrast, the levels of other cytokines increased again at week 26, in comparison with baseline. Levels of IL-4 and IL-33 rose throughout the follow-up period. Cytokine levels in lesional skin samples were compared with those of healthy controls both at baseline and during therapy. Conclusion — The results of our study show that administering apremilast therapy to patients with psoriasis can bring the levels of cytokines involved in the IL-23/IL-17 axis in the lesional skin to the level of cytokine in non-lesional skin and to the levels in the skin of healthy individuals.
Keywords:
psoriasis, cytokines, apremilast, phosphodiesterase-4 inhibitor
Cite as:
Kubanov AA, Solomka VS, Karamova AE, Verbenko DA, Vasileva EL, Artamonova OG. The effect of apremilast therapy on skin cytokine levels in patients with psoriasis. Russian Open Medical Journal 2020; 9: e0310.

Plaque-type psoriasis is a chronic inflammatory skin disease involving both the innate and adaptive immune compartments, crosstalking with skin tissue cells [1]. The current pathogenetic model is based on the interleukin (IL)-23/IL-17 axis [2]. Dendritic cells influenced by multiple factors (including tumor necrosis factor (TNF)-α and interferon (INF)-γ) produce IL-23. In turn, IL-23 acts on T helper cells (Th) 17 and Th 22, enhancing the production of IL-17 and IL-22 [2].

Cyclic adenosine monophosphate (cAMP) is a pivotal secondary mediator involved in regulation of inflammatory response. cAMP degradation occurs through the activity of the large superfamily of phosphodiesterases (PDE). In immune cells (including T cells, monocytes, macrophages, neutrophils, dendritic cells and eosinophils) and keratinocytes, this function is performed by phosphodiesterase (PDE)4. Inhibition of PDE4 leads to an increase in the cAMP level and inhibits the production of TNF-α, IL-12, IL-23, IL-17, IL-22 and other cytokines involved in the inflammatory reaction [5].

Apremilast is a novel PDE4 inhibitor with TNF-a, IL-10, IL-23 and IL-17A inhibitory activity [6]. The efficacy and safety of apremilast have been proven by randomized, placebo-controlled trials such as the Efficacy and Safety Trial Evaluating the Effects of Apremilast on Psoriasis (ESTEEM) 1 and 2 [7]. 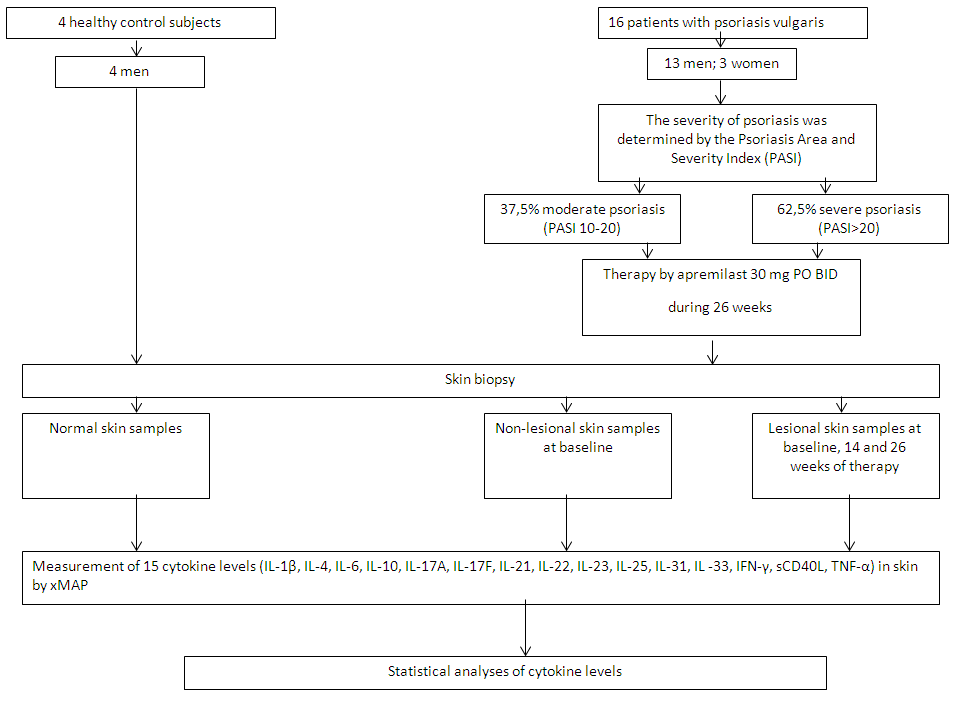 The study was conducted in accordance with the Declaration of Helsinki’s general ethical principles. Prior to the study each patient gave voluntary informed written consent, which was approved by the local ethics committee of the Federal State Research Center of Dermatovenereology and Cosmetology, Moscow, Russian Federation.

According to the research protocol, we examined the patients, recorded their body weight, collected information about adverse effects, and took pictures of the lesional skin (Table 1). Psoriasis severity was evaluated by PASI [8].

All patients were prescribed apremilast 30 milligrams (mg) per os (PO) Bis In Die (BID). The dosing of apremilast was titrated upwards from 10 mg PO on the first day to 30 mg PO BID on the sixth day of treatment. The duration of therapy was 26 weeks.

The efficacy of therapy was evaluated by PASI, BSA, static Physician's Global Assessment (sPGA) and Dermatology Life Quality Index (DLQI) at weeks 14 and 26 of therapy (Table 1).

Skin biopsy samples (size 0.8x0.5 cm) were obtained from patients with psoriasis and healthy individuals. Samples were weighed on a laboratory balance in labeled 1.5-millilitre (ml) tubes of the Eppendorf type (Axygen). Skin biopsy samples were regrounded using the automated tissue disaggregation system ‘Medimachine’ (BectonDickinson, USA) in special disposable chambers ‘Medicons’ (BectonDickinson, USA) for 2 minutes with the addition of 1 ml of phosphate buffer (pH=7.4) to each sample. Before the study, the suspension was passed through a disposable filter «Filcons» (BectonDickinson, USA) with a 50 micron (μm) pore size.

The level of cytokines was determined on the ‘BioPlex 200’ device (Bio-Rad, USA) using the commercial reagent kit ‘Bio-Plex Pro Human Th17 Cytokine Panel 15-Plex’ (Bio-Rad, USA), which allowed simultaneous determination of levels of the following cytokines: IL-1β, IL-4, IL-6, IL-10, IL-17A, IL-17F, IL-21, IL-22, IL-23, IL-25, IL-31, IL-33, IFN-γ, sCD40L and TNF-α, according to the previously described methodology [9]. The obtained values ​​were recalculated in accordance with the initial weight of the samples according to the formula:

Statistical data processing was carried out using Statistica13 software. The Shapiro-Wilk test was used to check the normality of the data distributions, and the Mann-Whitney test was carried out to assess the significance of differences between the groups. The levels of cytokines were indicated as the median [quartile 1; quartile 3], because the distribution of obtained values was defined as non-normal [10]. The confidence interval was set to 0.95.

Table 2. The highest and lowest values of cytokine levels in skin samples of patients with psoriasis

Figure 2. Cytokine levels in skin samples of patients with psoriasis and healthy subjects.

Progressive increases in IL-4 and IL-33 levels were observed throughout the study (Figure 3).

Figure 3. Levels of IL-4 and IL-33 in the skin samples of patients with psoriasis at baseline, 14 and 26 weeks of therapy.

In addition, the largest increases during therapy in comparison with baseline data were recorded for IL-33, IL-1β, and IL-4. Levels of IL-23, IL-25, IL-31 and sCD40L decreased throughout the study (Figure 5).

In our study, for the first time, skin cytokine levels of a control group were analyzed and compared with samples of lesional and non-lesional skin from patients with psoriasis. Additionally, we studied the effect of PDE-4 inhibitor therapy on skin cytokine levels in patients with psoriasis. The levels of cytokines in the lesional skin were measured at baseline, as well as at week 14 (second stage) and week 26 (third stage) of the therapy.

It was found that the cytokine levels in non-lesional skin approached the skin cytokine levels of healthy individuals, while in lesional skin. there were increases in the cytokine levels of IL-1β, IL-6, IL-17A, IL-17F, IL -22, IL-31 and TNFα. This finding is consistent with the biological role of these mediators in psoriasis as pro-inflammatory and immunoregulatory agents (Table 3). The data obtained are consistent with the results of the ESTEEM 2 and PSOR-011 (prior dose-finding study of apremilast in adults with moderate-to-severe psoriasis) trials [15, 16], where blood levels of IL-17A, IL-17F and IL-22 were found to be higher in patients with psriasis than in healthy individuals. A decrease in the levels of 13 cytokines level (IL-1β and IL-33 levels were the exceptions) was observed in the lesional skin by week 14 of the PDE-4 inhibitor therapy. Decreases in levels of IL-23, IL-25, IL-31 and sCD40L levels were sustained to week 26 of therapy. In contrast, levels of the other cytokines studied increased by week 26, exceeding the baseline level.

Table 3. The biological role of cytokines in psoriasis [14]

It was observed that IL-1β, IL-6, IL-10, IL-17A, IL-17F, IL-21, IL-22, IFN-γ and TNF-α levels had all decreased by week 14 of therapy, but had increased again by week 26. It should be noted that the increase in these cytokine levels did not lead to a deterioration of patients’ psoriasis.

Garcet et al. (2018) also noted decreases in blood levels of IL-17A, IL-17F, IL-22 and TNF-α in patients with psoriasis by 4 and 16 weeks of apremilast therapy, which was accompanied by clinical improvement [17].

Comparison of levels of the 15 cytokines in lesional skin during therapy with the baseline level of cytokines in non-lesional skin in the same patients showed: statistically significant differences for 5 cytokines (IL-1β, IL-6, IL-17A, IL- 17F and TNFα) at baseline, for 1 cytokine (TNF-α) at week 14, for 2 cytokines (TNF-α and IL-31) at week 26.

Comparison of levels of the 15 cytokines in lesional skin samples obtained at weeks 14 and 26 with cytokine levels in skin samples from healthy individuals showed the same positive changes in the processes of intercellular signaling during therapy. At baseline, statistically significant differences were observed for 8 out of 15 cytokines, by the week 14 for only 2 cytokines, and by week 26 for 4.

Thus, the complex mechanism for the transmission of intercellular signals, involving the interaction of skin cells and immune cells, with the IL-23/IL-17 axis at its centre, is significantly impaired in the lesional skin of patients with psoriasis where is an accompanying increase in pro-inflammatory cytokine levels. Under the apremilast therapy in the study, these levels approached the level of cytokines in non-lesional skin and those in the skin of healthy individuals.

This study was funded by grant No18-15-00372 of the Russian Science Foundation (‘The prediction of a response to targeted therapy of severe psoriasis’).