romj-2020-0401.pdf
Abstract:
Introduction — Nocturnal intermittent hypoxia in obstructive sleep apnea (OSA) causes cellular stress and consequent change in inducible heat shock protein 70 (HSP70) level. Thus, the objective of this study was to determine the relationship among nocturnal hypoxia and the serum HSP70 level in patients with severe OSA. Material and Methods — The study involved 34 patients with a clinical diagnosis of moderate to severe OSA (24 men and 10 women). Patients without OSA (10 men and 5 women) were included as a control group. The groups were similar in age. The polysomnographic monitoring was carried by standart methodology. Blood sampling for determining the HSP70 level was carried out between 8:00 and 9:00 am after polysomnographic monitoring. Results — The results of this study demonstrated a high apnea/hypopnea index (AHI), which determined the OSA severity and decreased the blood oxygen saturation (SaO2) (p<0.05). Sleep fragmentation in OSA patients confirmed an increase in respiratory arousal index (ArI). The HSP70 level significantly increased in OSA patients compared with the control group. Correlation analysis showed a positive relationship between HSP70 and AHI (R=0.5) in patients with OSAS, as well as a negative relationship between HSP70 and SaO2 (R=-0.3). Conclusion — Our results demonstrated a high level of HSP70 in patients with severe OSA syndrome vs. those without it. In OSA patients, a direct correlation was found between the HSP70 level and AHI, as well as an inverse correlation between the AHI level and SaO2. These findings suggested an association between the level of inducible HSP70 and nocturnal hypoxia in OSA patients.
Keywords:
HSP70, apnea, sleep, intermittent hypoxia
Cite as:
Madaeva IM, Kurashova NA, Semenova NV, Kolesnikova LI, Kolesnikov SI. Association of nocturnal intermittent hypoxia with heat shock protein 70 in patients with obstructive sleep apnea: a pilot study. Russian Open Medical Journal 2020; 9: e0401.

Heat shock proteins (HSPs), being stress proteins, are present in various organisms, ranging from bacteria to mammals. They are produced in response to countless damaging factors, such as heat, inflammation, ischemia, toxins, smoking, oxidative stress, and hypoxia. According to contemporary classification, there are 7 types of HSPs, which differ by their molecular weights and functions performed in cells. There are small HSPs with molecular weights of 25-27 kDa, or 20–22 kDa; and high-molecular-weight HSPs (110, 100, 90, 70, 60, 40 kDa) [1-4].

With regard to the various functions of the HSP, the HSP70 protein, for instance, prevents premature misfolding of the immature polypeptide chain and is involved in protein transport. Thus, HSP70 performs a protective function [5]. Experimental and clinical studies have shown the important role of HSP70 in the formation of various pathological processes [6-11]. The synthesis of HSP70 begins shortly after the cell exposure to a damaging agent, which is a non-specific response to stress, fulfilling a protective function. Consequently, a clinical link between insulin resistance and extracellular HSP70 has been proven in patients with type 2 diabetes mellitus [12, 13].

It has been suggested that HSP70 plays a role in sleep recovery. Sleep itself contributes to the restoration of neurons in preparation for subsequent wakefulness. V. Simonova et al. (2016) revealed the involvement of stress-induced HSP70 in the restoration of sleep after its complete deprivation. It has been proven that slow-wave sleep creates conditions for enhancing anabolic processes and accelerating protein synthesis in the brain [14].

Obstructive sleep apnea (OSA) is a common sleep disorder and is characterized by the severity of complications [15]. Nocturnal intermittent hypoxia and subsequent reoxygenation are the main pathophysiological mechanisms of complications in this ailment. One of the earliest cellular responses to stress is a sharp increase in HSP level, and this finding has been discovered in the course of various pathological processes. Nocturnal intermittent hypoxia in OSA patients is a real stress, in response to which an inducible change in HSP70 level should be expected. Hence, the assessment of the relationship between nocturnal hypoxia and serum HSP70 levels in patients with severe OSA was the objective of our study.

Our study involved 34 patients (24 men and 10 women), attending the Somnology Division at the Federal Budgetary Institution Research Center for Family Planning and Reproductive Health, Irkutsk, Russia, with complaints of snoring and respiratory arrest during sleep. The inclusion criteria were as follows: age 45 to 60 years old; a clinical diagnosis of moderate to severe OSA, as defined by American Academy of Sleep Medicine (AASM) criteria [16].

The study included the following exclusion criteria: previous treatment of OSA syndrome with continuous positive airway pressure (CPAP) or surgery, a history of drowsiness-related traffic accidents in the past 12 months, the presence of chronic diseases, and shift work.

According to the design of our research project, the control group included subjects without OSA syndrome (10 men and 5 women), fitting inclusion criteria agewise (Table 1). The treatment group included the patients with OSA syndrome with similar age, gender, ethnicity and chronic disease composition to the control group. Polysomnography (PSG) was performed in both groups of subjects.

The study was conducted after obtaining the informed consent of all participants, as stipulated by the ethical standards of the World Medical Association Declaration of Helsinki (1964, with later amendments from 1975 to 2013). The study protocol was approved by the Biomedical Ethics Committee at the Research Center for Family Planning and Reproductive Health (02.20.2019, Protocol No.2).

Polysomnographic monitoring was carried out in a specially equipped room of the Somnology Center, as close as possible to home conditions, using the GRASS-TELEFACTOR Twin PSG (Comet) system with AS 40 amplifier and integrated sleep module SPM-1 (USA) via conventional technique. Overnight 16-channel PSG with two electroencephalograms (C4, C3, O1, O2), two electrooculograms (ROC, LOC) and two electromyogram channels was conducted. Airflow in the nose and mouth was controlled by means of a thermistor, while respiratory effort, snoring and oxygen saturation were measured by means of the conductive straps on the chest and abdomen, a microphone and a pulse oximeter, respecrively. Sleep was evaluated at 30-second periods, using conventional assessment criteria, supplemented with apnea-hypopnea indices derived from the AASM guidelines. OSA syndrome was classified as mild with an apnea/hypopnea index (AHI) of 10–15 events per hour, moderate (AHI: 15.1-30 events per hour), and severe (AHI>30 events per hour) [16].

Venous blood samples were collected between 8.00 and 9.00 a.m. in test tubes after a 12-hour overnight fast and polysomnographic examination. The samples were centrifuged for 10 min at 1500 g and 4 °C. Serum was used to determine the HSP70 level. The samples were kept frozen at -40 °C for up to one month. HSP70 was measured by a quantitative sandwich enzyme-linked immunosorbent assay (ELISA) with EL×808™ Absorbance Microplate Reader (BioTek Instruments Inc., USA). The concentration of HSP70 was expressed in pg/ml. The HSP70 standard was used to generate a seven-point standard curve ranging from 0.156 to 10 ng/ml.

The normal distribution of the quantitative data related to the age-sex ratio and body mass index (BMI) made it possible to use Student’s t-test for comparison of their means among the control and treatment groups of subjects. Descriptive statistics was used to present quantitative data, including arithmetic mean and standard deviation – M±SD.

Binary variables were presented as frequencies in absolute values and in percentage – n (%).

All differences were considered statistically significant at p<0.05. Associations between the levels of HSP70, AHI, blood oxygen saturation (SaO2), and also indicators of the presence of chronic diseases were investigated using the Pearson’s correlation coefficient. 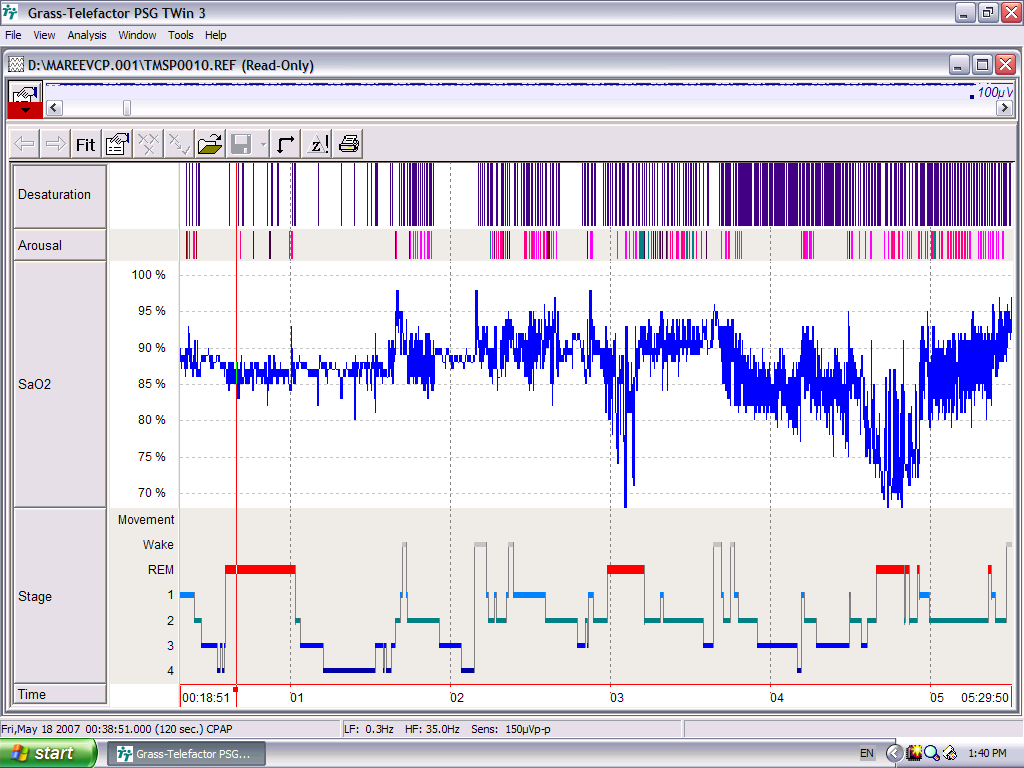 Figure 1. The sleep histogram in patient with OSA

The physiological role of HSP70 was studied in various models under conditions, such as hyperthermia, hypertension, contact with toxic chemicals, hypoxia, ischemia, inflammation, autoimmune pathologies, apoptosis, malignant tumors, organ transplantation, and bacterial and viral infections [2]. The level of HSP70 was also investigated during normal aging processes, spermatogenesis, depending on the phase of the menstrual cycle and physical activity [17]. It was noted that the content of HSP70 in blood lymphocytes increased in the course of autoimmune illnesses, which is assumed to be associated with the pathological process activity. In pathology of the cardiovascular system, especially with repeated episodes of myocardial ischemia/reperfusion, activation of HSP70 synthesis was detected as well. Furthermore, short-term episodes of coronary artery occlusion with reperfusion intervals were significantly increasing myocardial tolerance to subsequent longer episodes, which has led to a decrease in the incidence of myocardial infarction and reduced risk of life-threatening arrhythmias. In this situation, HSP acts not only as chaperones, but also as potential antioxidants [18-20]. Research by H. Alemi et al (2018) [21] showed an association between insulin resistance and HSP in patients with type 2 diabetes. It should be noted that the relationship of HSP70 with various indicators of pathology has been identified in various studies [22].

Quantitative methods are convenient and fast, and may be used to detect HSP70, especially circulating HSP70. Research has shown that changes in HSP70 levels may serve as a potential new biomarker for various diseases and disorders. However, the reliability, accuracy and involvement of HSP70 into pathological mechanisms remain poorly understood. Extensive clinical studies are needed to support previously reported results [23]. Hence, we tried to assess the relationship between nocturnal hypoxia and serum HSP70 levels in patients with severe OSA syndrome. PSG monitoring made it possible to assess the level of nocturnal hypoxia and the nature of breathing during sleep. Our pilot study demonstrated sleep fragmentation as a consequence of episodes of apnea and blood desaturation. It is well-known that intermittent nocturnal hypoxia is a factor in the stress response of the body [24].

Our study has also revealed that the HSP70 level in patients with severe OSA syndrome during nocturnal hypoxia was higher than in those without OSA. This fact supported the findings of yet another study, in which correlation with oxidative stress and tumor necrosis factor TNF-α was identified [25]. Moreover, the change in the level of HSP70 in patients with severe OSA syndrome, compared with control, and aggravation of chronic diseases that could change the cellular response to inflammatory process, allows us to consider this finding as a response to stress in the form of intermittent nocturnal hypoxia with OSA syndrome.

2. It requires further research on HSP70 expression at different degrees of severity of obstructive sleep apnea.

3. In the future, it is necessary to evaluate the change of HSP70 in the course of using CPAP to eliminate nocturnal intermittent hypoxia.

All procedures performed in studies involving human participants were in accordance with the ethical standards of the institutional and/or national research committee and with the 1964 Declaration of Helsinki and its later amendments or comparable ethical standards.

This work was performed with the use of equipment of Collective Research Centre “Center for the Development of Progressive Personalized Technologies for Health” of Scientific Сentre for Family Health and Human Reproduction Problems, Irkutsk, Russia.