Changes in gait biomechanics as functional symptom of chondromalacia patella

romj-2021-0213.pdf
Abstract:
The goal of this research was to investigate functional and biomechanical symptoms in patients with chondromalacia patella. Material and Methods — Gait biomechanics was assessed in 35 patients with diagnosed unilateral chondromalacia patella and in 20 healthy adult controls. We recorded hip and knee movements, impact loads and temporal characteristics of the gait cycle (GC) during self-paced walking. Results — The temporal characteristics of gait and the impact loads remained normal in the patient population. Hip flexion amplitude decreased both on the affected (p=0.002) vs. unaffected (p=0.016) sides, compared to healthy control, whereas the amplitude phase increased on the affected (p=0.012) vs. unaffected (p=0.001) sides, versus healthy control. Hip extension and adduction-abduction amplitudes did not change significantly. Stance-phase and swing-phase knee flexion amplitudes did not change significantly. Knee extension amplitude on the affected limb increased (p=0.015), and knee rotation on the unaffected limb decreased versus control (p=0.016). The so-called stairstep symptom defined in the study was found in 83% of patients: in 23 patients bilaterally and in 6 patients unilaterally. Conclusion — Chondromalacia patella affected the gait biomechanics on both sides. The changes in the kinematic patterns during the flat-surface walking were not substantial. The only pathognomonic functional symptom of the condition was the stairstep symptom.
Keywords:
chondromalacia patella, gait biomechanics, knee function
Cite as:
Altukhova AV, Kaurkin, SN, Skvortsov, DV, Akhpashev АА, Zagorodniy NV. Changes in gait biomechanics as functional symptom of chondromalacia patella. Russian Open Medical Journal 2021; 10: e0213.

Chondromalacia patella is a common cause of knee pain and function impairment. According to available statistics, the incidence of patellofemoral pain syndrome (PFPS) as an isolated health problem among patients at the first evaluation visit is 15%. PFPS combined with other disorders occurs in 25% of patients [1, 2]. Chondromalacia patella is more prevalent in females than in males [3-5]. Without timely diagnosis and treatment, PFPS can develop into patellofemoral osteoarthritis that may require surgery.

A few published studies investigated the effect of chondromalacia patella on gait parameters. Some authors described changes in flexion-extension amplitudes in the affected knee versus healthy control [7]. Nadeau S. and co-authors showed a decrease in knee flexion angle in patients with PFPS versus healthy control; such a decrease reduced the load on the affected joint [8]. According to Powers C.M. et al., knee flexion angle in PFPS subjects in loading response during free walking did not differ significantly from the healthy control. During fast walking, however, the mean angle in patients declined to 16.9 degrees versus 21.6 degrees in control [9]. Another study by Powers C. M. showed a slower walking speed and stride length in PFPS patients versus control [10]. This finding was also supported by other authors [11-13].

The issue of PFPS-associated changes in hip amplitudes is still debatable. Some authors describe a decrease in rotation, others argue no change [14, 15]. Barton C.J. and co-authors examined 26 PFPS patients and compared their data with a control group of 20 healthy subjects. The authors explained the decrease in hip rotation and walking speed in patients versus healthy control by a compensatory reduction of load on the affected joint during walking [16].

However, despite the available studies of PFPS effects on gait parameters, no specific pathognomonic sign has been found yet.

The goal of this study was to assess the functional and biomechanical symptoms in patients with chondromalacia patella.

Biomechanical gait analysis was performed according to the procedure described in our earlier study [17]. Five sensors of a IMU mocap complex were placed on the sacrum, the upper third of each thigh and the lower third of each leg and fixed with special cuffs. Walking movements and temporal parameters were then recorded while the subject was walking a distance of 10 metres at a self-chosen speed. For the subsequent analysis, we derived gait cycles from accelerometer data, calculated mean goniometry for hip and knee movements during the gait cycle and calculated the temporal parameters of the gait cycle. Thus, we obtained goniometry of hip and knee motions in three mutually perpendicular planes and vertical acceleration curves for the shin-fixed sensors.

Eight gait cycles were evaluated for each subject. We did not assess the variability of parameters during the steady-state walking at a self-chosen pace because it was low in subjects of our patient group even with mild functional disorders [18-20].

Impact load was assessed by the variable ‘Load’ measured in g’s (acceleration of gravity) at the beginning of the stance phase.

For abduction-adduction and rotation movements of both joints, we recorded total and a maximum amplitude over the GC.

The collected data were processed by standard ANOVA using Statistica 12 software. Medians and quartiles (25% percentile; 75% percentile) were calculated. The normality of data distribution was not verified due to small sample size; therefore, the significance of the differences was analyzed using the Wilcoxon Mann-Whitney test, with p<0.05 set as the level of statistical significance. Patient data obtained for the affected vs. unaffected sides were compared with the relevant data from the healthy controls.

The results of the biomechanical study are presented in Tables 1-3. Table 1 presents temporal parameters of gait cycle and impact loads.

Table 1. Temporal parameters of gait cycle and load amplitude at the beginning of the stance phase

The temporal parameters of gait cycle and the impact loads remained normal on both affected and unaffected sides.

Initial examination of the patient knee goniometry revealed a specific feature that we called the stairstep symptom. The stairstep on the curve reflects a short interruption in a first flexion of the joint (Figure 2). 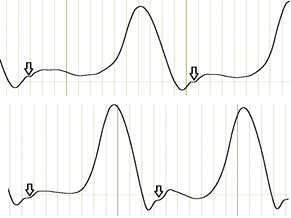 Figure 2. The stairstep symptom is marked with an arrow.

The results of the biomechanical analysis of walking, as well as of hip and knee movement, showed minor functional differences between healthy controls and patients, both on the affected and unaffected sides.

Flexion in both hip joints was slightly reduced. Maximum flexion at the beginning of the stance phase occurred significantly later and also on both sides. Although insignificantly, both symptoms reduced the walking speed in this study, which was consistent with literature data [9, 16, 21]. We did not find any changes in hip adduction-abduction and rotation movements. Yet, some authors [15] noted a change in hip rotation amplitude, which was a sign of developing gait abnormalities in patients with PFPS. However, the applied model and marker placement in that study did not allow proper recording of hip rotation movements. Besides, the study differed from ours in design, because the walking was done on a treadmill.

According to our data, patients had functionally normal movements in both knees. Yet, the available literature describes changes in flexion-extension amplitudes of the affected knee [15]. P. Levinger and W. Gilliard [22] reported the presence of certain changes in gait biomechanics parameters in such patients. However, their study methodology used data of a different type and it was not possible to compare their findings with ours.

Thus, the analysis of standard gait biomechanical parameters failed to detect any specific pathognomonic symptoms caused by the affected joint, with the only exception of the stairstep symptom. The reason why the knee begins to behave this way requires a further study. So far, we can assume that at the very beginning of the stance phase, when the flexion has just started, there is an obstacle to further flexion, e.g., incongruity of articular surfaces or a pain syndrome, which briefly and transiently interrupts the joint movement.

Chondromalacia patella affects the gait biomechanics on both sides, affected and unaffected. The changes in kinematics while walking on a flat surface were not substantial, without significant abnormalities and functional asymmetries. The only functional symptom that could be associated with chondromalacia patella was the stairstep symptom. According to our data, it remains unclear why the symptom is more often detected on both sides. Whether it is an early symptom or the well-known phenomenon of a healthy limb repeating the pattern of movements of the affected limb [23] should be a subject of further research.

All study procedures involving human subjects were performed in accordance with the ethical standards of the institutional and/or national research committee and with 1964 Declaration of Helsinki and its later amendments or comparable ethical standards.