romj-2021-0402.pdf
Abstract:
The article is dedicated to a clinical case of the panhypopituitarism development in a patient with HIV infection receiving antiretroviral therapy. The number of HIV-infected patients worldwide has increased significantly over the past decades. The introduction of highly active antiretroviral therapy into practice has significantly improved the prognosis for these patients. At the same time, the use of this therapy type is associated with a number of complications – in particular, with the development of the immune restoration syndrome. In addition, cases of endocrine dysfunction are described in many publications. Timely diagnosis and treatment of endocrine disorders would help avoiding complications caused by excess or deficiency of hormones.
Keywords:
panhypopituitarism, HIV infection, highly active antiretroviral therapy
Cite as:
Morgunova TB, Maloletkina ES, Amergulov II, Glinkina IV, Pavlova MG, Fadeev VV. X Panhypopituitarism in HIV patient receiving antiretroviral therapy. Russian Open Medical Journal 2021; 10: e0402.

The number of patients with acquired immunodeficiency syndrome (AIDS), or those infected with the human immunodeficiency virus (HIV), is growing steadily worldwide, with a total number of cases ca. 38 million in 2019 [1]. Since 1996, highly active antiretroviral therapy (HAART) has been introduced into medical practice, and by 2019, approximately 25.4 million HIV-infected patients (67%) were receiving this treatment option. The use of HAART in the treatment of HIV-infected patients has led to a significant improvement in the prognosis for patients, a decrease in the AIDS incidence and increase in life expectancy. At the same time, the prevalence and structure of concomitant pathology changed in these patients. In particular, they often develop endocrine system dysfunctions and autoimmune diseases, which require timely diagnosis and treatment. Analysis of available publications revealed a very few descriptions of pituitary insufficiency cases in such patients. The studies published in 1980s and 1990s described mainly tumors and opportunistic infections (cytomegalovirus, toxoplasmosis, herpes) among the causes of hypopituitarism in patients with HIV infection [2-4]. With the introduction of HAART, the prevalence of opportunistic infections has decreased. As a result, the number of complications has decreased. Among recent publications, cases of pituitary abscess with subsequent development of panhypopituitarism [5], hemorrhage in the pituitary gland against the background of cytomegalovirus infection, and development of panhypopituitarism in patients receiving HAART [6] were described. In this article, we are presenting a clinical observation of panhypopituitarism in a patient with HIV infection receiving HAART.

In January 2019, a 58-year-old man, was seen at the Clinic of Endocrinology of the University Clinical Hospital No. 2, I.M. Sechenov First Moscow State Medical University (Sechenov University), with complaints of general weakness, fatigue, poor performance, weight loss and decreased libido.

In 2005, oropharyngeal candidiasis and esophageal candidiasis, along with manifestation of cytomegalovirus infection were diagnosed. The examination has revealed stage 4C of HIV infection sensu clinical classification adopted in the Russian Federation, AIDS. Antiretroviral therapy was prescribed, and conservative therapy of opportunistic infections was carried out. In 2007, with dynamic monitoring, gastric lymphoma was diagnosed, and six courses of polychemotherapy were carried out. Esophagogastroduodenoscopy performed in 2018 revealed no presence of gastric lymphoma.

Since 2005, the patient has been receiving antiretroviral therapy using various regimens: efavirenz + zidovudine + lamivudine; darunavir + ritonavir + zidovudine + lamivudine; darunavir + ritonavir + abacavir + lamivudine. At the time of the medical appointment in 2019, the patient was taking raltegravir 400 mg (1 pill twice daily); lamivudine 150 mg (1 pill twice daily); abacavir 600 mg (1 pill once a day). Immune status from October 2019 was as follows: CD4=744 (24%), CD8=1206 (39%), CD4/CD8=0.62. The HIV RNA viral load, as of October 2019, was undetectable. There were no opportunistic diseases at the time of appointment in January 2019.

In February 2019, upon admission to the Clinic of Endocrinology: the patient’s height was 175 cm, weight was 63 kg, and BMI=20.9 kg/m². The skin was pale and moderately moist to dry. There was a poor growth of facial hair, and lack of hair growth in the armpits. The subcutaneous fat was moderately developed and evenly distributed. BP=85/55 mm Hg on both arms. Pulse was 78 beats per minute. According to the questionnaire on erectile function (International Index of Erectile Function – IIEF-5), severe erectile dysfunction (ED) was established (5 points). Based on the results of the questionnaire on the symptoms of aging in men – the Aging Males Symptoms (AMS) scale, severe androgen deficiency was revealed (62 points).

A test with insulin hypoglycemia was performed. Secondary adrenal insufficiency and somatotropic insufficiency were diagnosed. Hypoglycemia was achieved at the 30th minute (blood glucose 1.8 mmol/l). The maximum level of growth hormone in hypoglycemia was detected at the 60th minute of the test (<0.066 ng/ml). The maximum level of cortisol was identified at the 60th minute of the test (30 minutes after hypoglycemia) (89 nmol/l). Hydrocortisone was prescribed at a daily dosage of 15 mg, divided into two doses (10 mg at 8:00 hr and 5 mg at 15:00 hr). Against this background, the patient noted an improvement in overall health: a decrease in weakness and fatigue, along with a weight gain of 5 kg. From September 2019 through February 2020, the daily dose of hydrocortisone was 10 mg: 5 mg at 8:00 hr and 5 mg at 13:00 hr. Against the background of replacement therapy for secondary hypothyroidism with levothyroxine in a daily dose of 50 μg, the level of free T4 remained low (7.3 pmol/l): hence, from February 2019, the dose of levothyroxine was increased to 125 μg per day.

Thus, the patient was diagnosed with panhypopituitarism. To clarify the etiology of panhypopituitarism, magnetic resonance imaging of the chiasmatic and sellar regions was performed in February 2019: the suprasellar cistern prolapsed into the cavity of the sella turcica. The pituitary gland was flattened and had the following dimensions: vertical=2.5 mm, transverse=14 mm, anteroposterior=14 mm. The structure of the adenohypophysis was heterogeneous; with contrast enhancement, no zones of pathological accumulation of the contrast agent were detected. The pituitary stalk thickened to 4 mm, while its normal thickness should not exceed 2 mm. Thus, the medical report stated MR image of a partially empty sella turcica. Hence, the patient was offered re-hospitalization at the Clinic of Endocrinology in February 2020.

The patient’s height=175 cm, weight=75 kg, BMI=24.49 kg/m². Body temperature was 36.6 °C, and skin was moderately moist and normally colored. The subcutaneous fat was moderately developed and evenly distributed. There was swelling and tenderness on palpation laterally to the right nipple, but no edema. In the patient, we detected vesicular breathing, no wheezing, respiratory rate of 16 per minute, muffled and rhythmic heart sounds, BP=110/80 mm Hg on both arms. The pulse was 72 per minute, rhythmic. Peripheral vascular pulsation was maintained. On palpation, the abdomen was soft, painless in all parts. Liver was located along the midclavicular line and the edge of the costal arch. The symptom of tapping in the lumbar region was negative on both sides. The thyroid was not enlarged (as identified by palpation), painless, nodular formations were not palpable.

The pituitary tissue lined the bottom of the sella turcica with a thin layer. The dimensions: anteroposterior=14 mm, bilateral=11 mm, vertical=up to 3 mm. Emerging empty sella turcica was detected. The pituitary gland was homogeneous, its upper surface was concave, the stalk was not deflected, the optic chiasm was not compressed, and the suprasellar cistern was not dilated. The cavernous sinus and visible parts of the internal carotid artery and carotid siphon were without pathological changes. With the bolus injection of a contrast agent (Magnevist®: 0.2 ml/kg of the body weight), its uniform accumulation by the pituitary tissue was noted. No areas of the contrast agent pathological accumulation were found in the brain. Thus, the medical report stated the MR image of emerging empty sella turcica, while no MR signs of pituitary neoplasms were detected in the study with contrast enhancement (Figure 1). 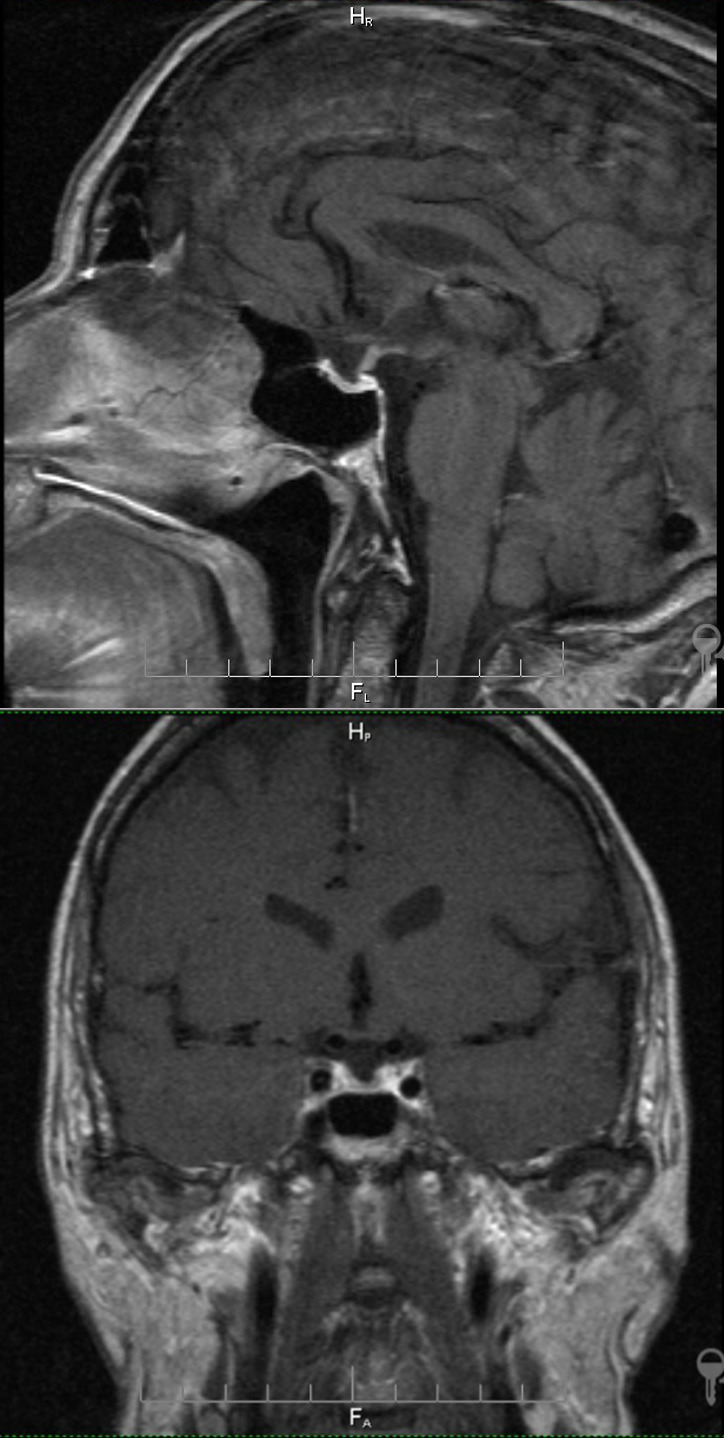 Outcome and results of the follow-up monitoring

Based on the existing complaints and the examination conducted in February 2019, a patient at the stage 4C of HIV infection, AIDS, in remission while receiving antiretroviral therapy, was diagnosed with panhypopituitarism. The duration of HAART at the time of panhypopituitarism diagnosis was 15 years. The patient was prescribed replacement therapy for secondary adrenal insufficiency, secondary hypothyroidism and hypogonadism. Against the background of the ongoing therapy from February 2019 to February 2020, the patient’s performance improved significantly: weakness and fatigue decreased, and he gained weight of 12 kg. In February 2020, based on the results of the second medical examination, the correction of the ongoing substitution therapy was carried out.

A repeated MRI study of the pituitary gland with contrast enhancement was carried out; and the presence of a developing empty sella turcica was confirmed. Given the patient’s HIV infection, the clinic continued antiretroviral therapy, and the supervision by an infectious disease specialist was recommended.

In presented clinical case, the patient, at the time of the visit to the clinic, in February 2019, had a definitive clinical picture of panhypopituitarism. An interesting fact is that panhypopituitarism has developed 15 years after the detection of HIV infection, AIDS, and initiation of HAART.

In this patient, the deficiency of tropic hormones arose due to emerging empty sella syndrome (ESS). ESS often causes the loss of one or more tropic functions of the pituitary gland. Technically, ESS presumes that the cerebrospinal fluid fills over 50% of the sella turcica volume, or else the pituitary gland is less than 3 mm thick; whereas the scenario, in which the fluid fills less than 50% of the volume, is called the partially empty sella syndrome [7, 8]. According to a systematic review by Matthias K. Auer et al. [8], the prevalence of hypopituitarism in patients with EES ranges from 15 to 68%. Obviously, the loss of tropic functions develops more often with the full variant of the syndrome than with the partial syndrome [9].

The cause of EES formation in our patient is not entirely clear. It is well-known that there are two variants of this syndrome. The first one is called the primary EES, occurring when there was no previous pathological process in the pituitary region [7]. Primary EES can be detected incidentally via MRI, as well as during examination for headaches, neurological or visual impairments, or signs of pituitary insufficiency. The second variant is called secondary EES. It is formed as a result of a surgical or radiology treatment of the pituitary adenoma, or after its spontaneous regression. Secondary EES is more often formed in patients with obesity and/or arterial hypertension; in women, especially in the presence of several pregnancies in anamnesis, as well as after suffering from hypophysitis (especially, its lymphocytic type). Our patient had no history of any factors contributing to the formation of EES (obesity, arterial hypertension). Initially, according to MRI performed in 2019, he had a thickening of the pituitary stalk, which may serve as an indirect sign of hypophysitis. At the same time, the hypophysitis is also characterized by an increase in the volume of the pituitary gland, which was not the case in this patient [10].

We did not have an opportunity to detect anti-pituitary antibodies that could confirm or exclude the presence of lymphocytic hypophysitis.

The presented case is interesting from a clinical standpoint. The first symptoms of tropic hormones deficiency of the pituitary gland in a patient appeared approximately six months before the diagnosis, and they gradually increased since then. Naturally, secondary adrenal insufficiency was the main factor determining the severity of the patient condition at the time of pituitary insufficiency detection. The potential impact of a stress factor (infection, trauma, surgery) could lead to severe decompensation of adrenal insufficiency and an aggravation of the patient condition. The timely diagnosis of panhypopituitarism, along with the prescription of replacement therapy have led to an improvement in the patient well-being and an increase in his performance and quality of life. Further on, he would need a lifelong substitution therapy, dose adjustment of medications, and supervision of an endocrinologist.

No external sources of funding for this study are acknowledged.

The patient voluntarily signed the informed consent form for the publication of anonymized personal medical information.

The authors declare no obvious or potential conflicts of interest related to the publication of this article.

All authors made a significant contribution to the preparation of the manuscript, read and approved the final draft prior to its publication.