Hypertension remains one of “the most significant non-infection pandemiae in human history contributing to a pattern of cardiovasular morbidity and mortality” [1]. Hypertension contributes to one out of every seven deaths in the United States, and approximately 70% of persons who have a first heart attack or stroke are hypertensive. Prevalence of the arterial hypertension increases with age to approximately 70% among persons aged 65 years and older [2]. It’s necessary to note that medical tactics and cardiovascular risk stratification in patients with arterial hypertension strongly depend on type and intensity of target organs injury and associated comorbidity.

Vascular wall is a well-known target organ in hypertension. High-resolution ultrasound imaging of arteries (USIA), a convenient noninvasive method for evaluating carotid arterial walls, became a standard in clinical investigation of hypertensive patients [3]. USIA depicts 2 main clinical markers of vascular lesion: increased intima media thickness (IMT) and plaque formation. Both changes are related to ageing and are accelerated by hypertension and other risk factors. However, the majority of clinical trials have suggested that those findings were affected by different cardiovascular risk factors.

With regard to relation to ageing, some previous studies had indicated that IMT as well as atherosclerotic plaque formation are both age dependent processes, which aggravation is due to hypertension and other cardiovascular risk factors [4, 5]. But the results of the majority of clinical trials had been received in adult population (patients older than 65 were mostly excluded), on the other hand the very involutional process influence upon vascular wall remodeling remains in the area of uncertainty. All mentioned above encouraged us to study age dependent vascular remodeling in elderly patients with arterial hypertension.

Intima media thickness was assessed by means of ultrasound system Philips Envisor HD (USA) according to a Consensus Statement from the American Society of Echocardiography Carotid Intima-Media Thickness Task Force Endorsed by the Society for Vascular Medicine (2008). Both right and left carotid arteries were studied.

Target blood pressure levels were considered as according to national guideline on diagnostic and treatment of the arterial hypertension [1]. In comparison analysis stable target blood pressure criteria was calculated as the ratio of all cases of elevated blood pressure episodes and number of days of observation. The only strict condition of this criteria calculation was continuous blood pressure self-control and antihypertensive medication.

Received data were put together into the analytical data base. Certain parameters were indexed while several parameters were ranged according to the study protocol. Normality was checked by Shapiro-Wilks criteria, skewness and kurtosis calculation. Statistical hypothesis were checked by 2-sided Mann-Whitney test. Correlation analysis by Spearmen, Kendall and gamma correlation were performed. Basing on presumed type of time function, polynomial approximation of received parameters’ values by means of least squares method was performed. Established time functions were used to construct first derivatives and phase patterns on “time function – it’s first derivative” surface. Data are presented as mean±SD unless otherwise indicated. Probability level (p) less than 0.05 was considered statistically significant.

Age dependent intima media thickness was of nonlinear character, and remained rather stable up to age of 74 years. After that age, briskly augmentation of the IMT with mean rate equal to 0.157 cm/year occurred (Fig. 1). Phase pattern analysis revealed stable focuses (0.114; 0) – for left carotid artery, and (0.105;0) for right carotid artery (Fig. 2). 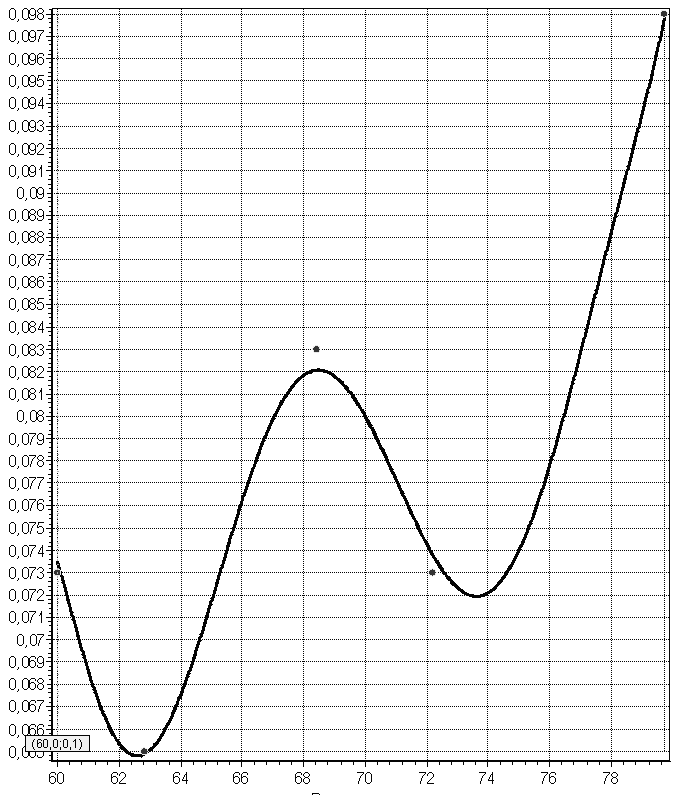 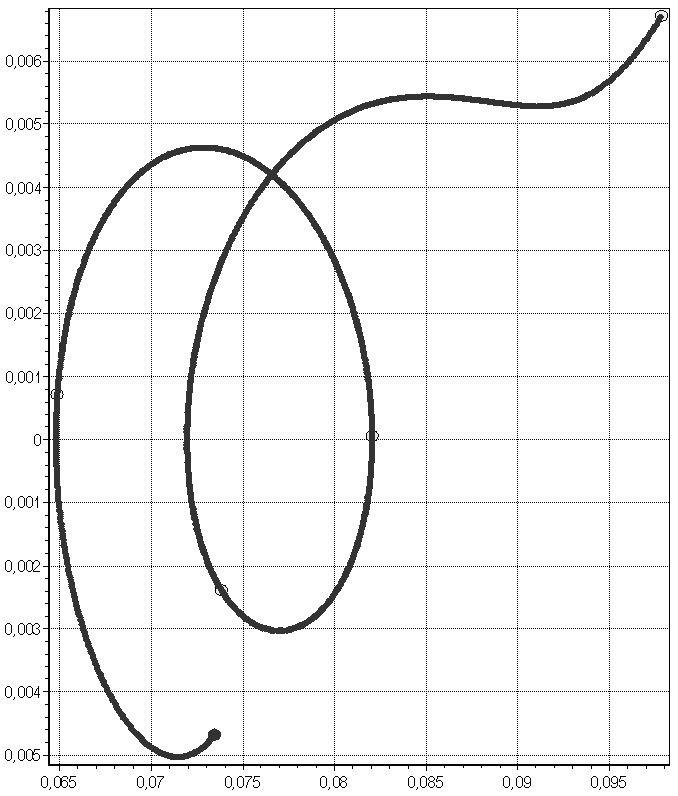 Nowadays IMT dependence upon age is beyond any doubts, but the characteristics of this dynamics as well as intimate mechanism this augmentation remains unclear. In several studies of IMT in several age groups all measurements were performed without taking atherosclerotic lesion into account [6, 7]. In means that data were received by measurements in full range from plaque free to significant atherosclerotic lesion zones of carotid arteries. Exclusion criteria were not strict enough in other trials, for example patients with diabetes mellitus and peripheral artery disease were not excluded from the study.

In our study all measurements were performed at unaffected areas of vascular wall. We tried to use strict criteria to avoid all possible vasculopathies as well as symptomatic secondary genesis of arterial hypertension in patients involved in the study. Patients of age groups I and II were totally comparable by gender and clinical characteristics, and medication spectrum.

There are lots of studies suggesting existence of correlation between IMT and blood pressure volumes. For instance, paper of di Bello (2009) postulated significant correlation between pulse pressure and IMT, but this data are no doubt questionable, for r value in this work was equal to only 0.19, and no analysis of nonlinear correlation was mentioned. In our study no data sustained possibility of blood pressure level influence upon IMT was received [8]. So, the possible conclusion is that age dependent increase of IMT belongs to involutional process in human arteries.

Characteristics of age dependent IMT dynamics are also controversial. In majority of studies nonlinear type was detected. In the same time S. Homma and coauthors had studied practically healthy persons in age range from 21 up to 105 years old and revealed linear IMT dependence on age [9]. The increase in IMT reflects predominantly intimal thickening. When sites with plaques are used to measure IMT, progression of IMT will show exponential acceleration in the elderly. In contrast, mean IMT in plaque-free sites reveals nonlinear association with age.

Taking into consideration deciphered mechanisms of vascular remodeling, linear age dependent increase of IMT seems to be hardly probable [10, 11, 12]. According to biomechanics, the normal artery is subjected to 3 primary mechanical stresses: a blood flow-induced wall shear stress, a blood pressure-induced circumferential wall stress, and an axial wall stress that appears to arise during development and to persist into maturity because of the long half-life of elastin. Coupling of mechanic stresses and biomechanical vessel wall characteristics influence can mostly explain oscillations of IMT during ageing in studied sample. Hence, further investigations of intimate age dependent vascular remodeling process are strongly necessary.

The majority of the IMT studies postulates association between IMT and atherosclerotic plaque formation. Contrary to that in our study such association was not revealed, and this fact also indicated speciality of vascular remodeling in elderly and senile patients.

In elderly patients age dependent diffuse increase of intima media thickness was detected. The dynamics of vascular remodeling was of nonlinear character, and was independent on degree and duration of hypertension. Received data can be considered as a reasonable doubt of intima media thickness usage as atherosclerotic lesion markers in elderly patients.

Conflict of interest: Nothing to declare.

Author's edition of the text