romj-2020-0311.pdf
Abstract:
Objective — to reveal the incidence of tubular breast deformity and to compare macromorphometric breast data with the constitution of women who need aesthetic breast correction. Material and Methods — There was conducted macromorphometry of the mammary glands in 101 women using the Body Logic system, as well as anthropometry and somatotyping with indication of sthenic, ectomorph and endomorph body types. Results — Among women with aesthetic problems of mammary glands, tubular breast deformity was revealed in 17.6% of sthenics, 23.5% of ectomorphs, and 58.8% of endomorphs. The Norwood Index, as an objective criterion of tubularity, had the largest value in endomorph women. Conclusion — Endomorph women were more susceptible to the development of tubular breast deformity in comparison with women of other body types.
Keywords:
mammary gland, morphometry, tubularity, somatotype
Cite as:
Pakhomova R.A., Karapetyan G.E., Kochetova L.V., Sindeeva L.V., Karelina N.A., Ratushniy N.A. Morphometric parameters of mammary glands in women of different body types in the normal condition and in case of tubular breast deformity. Russian Open Medical Journal 2020; 9: e0311.

In contemporary mammology much attention is paid to the health and aesthetics of mammary glands [1-4]. High requirements of women to their appearance, including breast, necessitate constant improvement in plastic surgery technologies. Breast surgical procedures performed in the contemporary world can be called the evolutionary achievement of medical science. At the same time, aesthetic operations with the use of silicone implants sometimes lead to adverse medical consequences – these can be both clinical complications and patient’s dissatisfaction with the result. Capsular contracture is one of the most frequent clinical complications of augmentation mammoplasty. According to the data from different authors, it occurs in about 74% of women. Furthermore, in 12% of women the formation of a dense capsule around the implant requires re-operation in the first 2 years given that this percentage increases with time and over the next 3 years it reaches 20%. The prevention of the development of capsular contracture has been worrying plastic surgeons since the introduction of mammoplasty into practice. By now, there has been identified a sufficient number of reasons causing capsular contracture. However, there is no single treatment; neither criteria have been developed to predict the development of capsular contracture nor preventive measures [4-6]. There is an opinion that complications that develop after augmentation mammoplasty are more common in women with a tubular form of the breast [7]. In this regard, fundamental disciplines can help the surgeon. In particular, constitutional anatomy allows us to consider issues of breast surgery from individual perspective [8]. However, despite all the relevance of the clinical anatomy of mammary glands in terms of its practical application, studies that compare the morphometric characteristics, taking into account the constitution of the body, are not numerous.

In connection with the importance of the problem, there was set the objective of the research: to reveal the incidence of tubular breast deformity and to conduct a comparative analysis of the results of breast macromorphometry and the somatotype of women who need aesthetic breast correction.

The research was carried out among 101 women of the first period of mature age (21-35) who applied to the clinic of plastic surgery for the possibility of surgical correction of mammary glands. The criterion for exclusion from the survey was the presence of childbirth in case history.

After measuring the diameter and degree of protrusion of the areola, the Norwood index (IN) was calculated using the following formula: IN = areola protrusion / areola diameter. On the basis of IN value, tubular breast deformity was either established or excluded. Tubular deformity was established in case of an index value from 0.41 to 0.66 [9].

Somatotype was determined by the Rees-Eysenk index according to the formula: Index=BLx100/(TTDx6), where BL was the body length (cm), TTD was the transverse thoracic diameter (cm). If the obtained indicator did not exceed 96, the constitutional type was regarded as pyknic (endomorph). With an index value ranging from 96 to 106, the somatotype was recognized as normosthenic. If the index value exceeded 106, such women were classified as asthenic (ectomorph) [10]. Body mass index (BMI) was also calculated.

In the statistical processing of the retrieved data, nonparametric methods for data analysis were used in MS Office Excel 2010, as well as SPSS Statistics 22.0. Central tendencies and dispersions of quantitative characteristics were evaluated by the median, the third and the first quartiles – Me (LQ, UQ). The significance of intergroup differences in quantitative characteristics was evaluated using the non-parametric Mann-Whitney U test, qualitative – using χ2 criterion. Correlation analysis was also used.

The examined women were divided into three groups according to their somatotypes: normosthenic (sthenic) somatotype was detected in 32.7% of women, asthenic (ectomorph) – in 33.7%, and endomorph (pyknic) type – in 34.6% of women. The median length of women’s body was 164.0 (158.8, 167.2) cm, body weight – 62.8 (59.4, 64.7) kg. It should be noted that endomorphy (pyknic type) is not always associated with overweight; it can be connected with large size of the chest, defined in the frontal plane. Our research confirmed this concept. Among the examined women there were no registered persons with overweight and obesity. 80.2% of women had normal BMI values. 19.8% of women had weight deficit.

The use of individual typological approach during the initial examination of women revealed a number of significant features of the morphometric parameters of mammary glands, depending on the body type. In women of sthenic somatotype, the distance from the jugular notch to the breast crease was 24.7 (24.1, 25.2) cm, which is significantly less than that of the representatives of asthenic somatotype – 25.5 (23.6, 25.7) cm and more than that of the pyknic somatotype – 23.4 (20.5, 26.2) cm.

According to the distance from the jugular notch to the nipple, somatotypes were clearly ranged: the smallest distance was found in sthenics – 17.0 (16.5, 17.1) cm, the biggest one in endomorphs – 18.3 (17.9, 18.6) cm, ectomorphs occupied a middle position between the sthenics and endomorphs by the value of this parameter – 17.5 (17.3, 17.6) cm. Also, women of pyknic type were characterized by minimal values of the distance from the nipple to the breast crease at rest and during tension in the absence of statistically significant differences in the indicated characteristics between the representatives of asthenic and sthenic somatotypes. The thickness of the skin-glandular folds in the upper poles of the breast and skin extensibility in the area of the lower pole of the gland revealed no typological features (Table 1).

Table 1. Morphometric parameters of mammary glands depending on the somatotype

The frequency of the tubular mammary gland, depending on the somatotype, is presented in Figure 1. 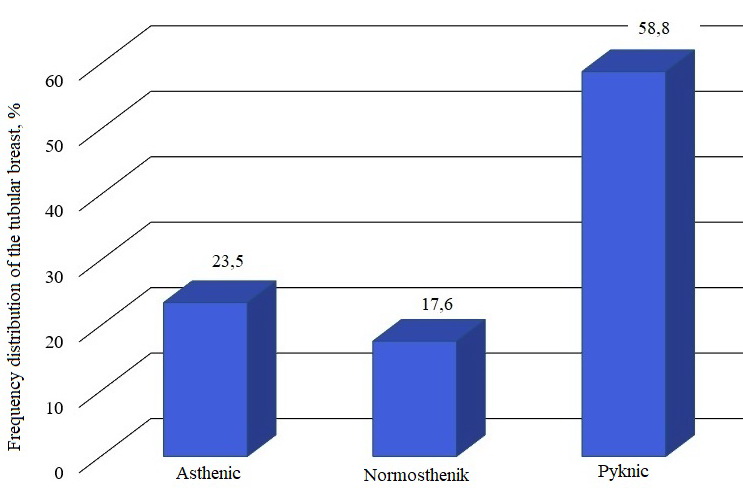 Figure 1. The frequency of the tubular mammary gland, depending on the somatotype.

It was adjusted that the aesthetic problems of women of pyknic somatotype were due to the presence of tubular breast deformity, which was registered in 58.8% of cases in our study. Among ectomorphs, the tubular mammary gland was found in 23.5% of cases, and in 17.6% of cases in sthenics.

The correlation of the tubular breast deformity with the morphometric parameters of the mammary gland and the somatotype was objectively confirmed by the results of the correlation analysis. There were established strong inverse correlations between the Norwood index and the distance from the jugular notch to the breast crease (r=-0.865, p<0.001), the Norwood index and the distance from the nipples to the breast crease in a free state (r=-0.879, p=0.002) and under tension (r=-0.885, p=0.004). Also, this index correlated with the thickness of the skin-glandular fold in the region of the upper pole of the mammary gland (r=0.716, p<0.001) and the elasticity of the skin in the region of the lower pole of the gland (r=-0.674, p<0.001).

There were found direct correlations of the average force between the Norwood index and BMI (body mass index) (r=0.523, p=0.013). In other words, when the BMI was higher, there was a greater risk of the formation of tubular breast deformity. All correlations were statistically significant (p<0.05).

The tubular form of the mammary gland is a case when the breast has the shape of a high cone on a narrow base, with a wide and protruding areola. From 8 to 15% of patients in aesthetic surgery clinics have signs of a tubular breast [11]. This deformation of the mammary gland causes the greatest psychological discomfort in patients and is one of the most difficult tasks for plastic surgeons. Today, there is no universally accepted standard of surgical tactics for patients with tubular deformity changes of mammary glands, since the volume of glandular tissue deficiency varies depending on the particular clinical case [12] The choice of the most appropriate technique to achieve optimal results of surgical correction is exclusively the prerogative of the operating plastic surgeon [13, 14].

Anatomical justification is obligatory in determining the tactics of corrective surgery of mammary glands. Anthropological approach during mammoplasty had already been raised earlier. In the research of V.N. Kasanov et al. [15] special attention was paid to the influence of the ethnic component on the formation of various forms of mammary glands, it was recommended to consider it while selecting an implant and it was important for the development of measures to prevent adverse postoperative complications. At the same time in the available literature there was practically no information about the constitutional features of the morphometric parameters of mammary glands in the formation of their anatomical features requiring aesthetic correction. In the present study, there had been made an attempt to compare the data of breast morphometry with the body type of women, which we regard as a scientific novelty.

According to the results of the study, the following conclusion can be made: women of pyknic somatotype were more susceptible to the development of tubular breast deformity in comparison with women of other body types.

All procedures conducted in human studies were consistent with the ethical standards of the national research committee and the Declaration of Helsinki, 1964. The study was approved by the local ethics committee of Prof. V.F. Voino-Yasenetsky Krasnoyarsk State Medical University (Krasnoyarsk, Russia).

The authors declare no conflict of interest.