Melanoma is a very aggressive form of cancer and is capable of rapid and early metastasis [1], which drops the 5-year survival rate from 97% to 10-15 % [1]. Early diagnostics of melanoma is necessary for effective treatment. However, the currently adopted diagnostic methods, based on the analysis of blood samples, have a sensitivity of 47% [2] when applied during the early stages of the disease. Low sensitivity is explained by the small amounts of circulating tumor cells (CTC) that are present in the blood at early stages. Currently adopted invasive techniques involve an injection of probing catheter into major arteries, which can cause several complications including blood clotting, and provide the sensitivity of 58% [3-6].

Several research groups proposed, in 2005-2007, a method of integrated photoacoustic microscopy-cytometry based on the explosion of individual cancer cells to laser pulses and detection of acoustic responses. Similar methods are already used in gas spectroscopy [7], monitoring of the lymph nodes [8], and visualization of breast cancer tumors [9]. Later, in 2009, this approach was applied to the detection of circulating tumor cells [10] in the blood. Recent studies [11] concluded that this noninvasive approach has very high sensitivity and is potentially able to detect even a single cancer cell against tissue and blood background.

Another important problem is the development of precise algorithms that can automatically detect the responses from melanoma cells in real-time. The current approach is based on the calculation of standard deviation or amplitude of acoustic responses, which tend to be higher for melanoma responses in comparison to the responses from normal blood cells. We proposed a different model-based approach, which was based on subtraction of the ensemble average normal acoustic response from melanoma responses. In this study, those two methods were tested and compared on the in vivo murine data.

Photoacoustic cytometry is based on irradiation of circulating blood using laser pulses. When the blood or CTCs absorbs laser energy they expand and generate acoustic waves due to the photoacoustic effect. Melanoma cells absorb a greater amount of laser energy, in some cases, they even burst from the absorbed heat and release micro-bubbles [11]. In both cases, melanoma cells generate acoustic responses that have different shapes compared to normal blood cells and sometimes have significantly higher amplitudes.

Data, used in this study, was obtained using resonance acoustic piezosensor Imasonic S.A. custom 3.5 MHz single element transducer (IMASONIC SAS, France). The bandwidth of the sensor was limited to 0-6 MHz at -3 dB level. The acoustic signal was intensified by the internal amplifier and digitized using Alazar ATS9350 analog to digital converter with a sample rate of 500 Msps, resolution of 12-bit, and bandwidth of 250 MHz. The duration of analyzed acoustic signals was 8 µs. The beginning of each waveform was synchronized using a pulsed laser with a wavelength of 1064 nm, pulse duration of 2 ns, a pulse repetition rate of 2 kHz, and pulse energy of 100 µJ.

Laboratory animals were kept according to the instructions of the Saratov State Medical University (No. 82 dated January 30, 2020). The care protocol does not contradict the international principles of biomedical animal studies of the 1985 Geneva Convention. The mice from the Saratov State Medical University were studied under an active research protocol approved by the Ethics Committee of Saratov State Medical University (wide approval No. 5) on 29.12.2018. The BALb/c mouse was selected for the experiment. It was 6–8 weeks old and weighing 20–25 g. The surgical part was performed using general anesthesia, intraperitoneal injection of drugs [a mixture of Zoletil (40 mg per kg, 50 μL, Virbac SA, Carros, France), and 2% Rometar (10 μLand 10 mg per kg, Spofa, Czech Republic)]. At the end of the experiment, the animal was sacrificed with an overdose of anesthesia. The mouse carotid artery was cannulated, and 106 of B16F10 cells in DPBS buffer were injected using a syringe pump (AL-1000, World Precision Instruments, USA). The volume of the fluid coming out of the syringe during the minute was 40 μL. The photoacoustic signals were detected on the femoral artery using a US transducer. Successful alignment on the vessel was characterized by the maximum acoustic response, as well as the obvious pulsation of the arterial vessel.

B16F10 cell culture [12] was grown in the Dulbecco’s modified Eagle medium (DMEM) with high glucose concentration (Sigma-Aldrich, US) supplemented with 10% of the fetal bovine serum (FBS) and 1% of the penicillin-streptomycin at 37 °C in 5% CO2 and a humidified atmosphere. The culture medium was changed every three days until monolayer formation was observed. After monolayer formation, cells were detached by 0.25% trypsin solution with 0.02% EDTA. One part of the received cell suspension was mixed with 2 parts of the fresh cell culture medium for trypsin effect neutralization and centrifuged at 1000 rpm for 5 min. After that, the supernatant was aspirated, and the cell pellet was resuspended in an appropriate volume of DPBS. Finally, the cell suspension was stained by 0.4% Trypan blue solution (Invitrogen, US) for 5 min and counted by automated cell counter "Countess" (Invitrogen, US) to estimate cell viability and concentration of cells.

We obtained 1000 different acoustic responses before the injection to be used as control data. After the injection, we manually extracted another set of 1000 acoustic responses from melanoma cells, based on the form of the signals. The signals were filtered using a digital rectangular low-pass filter with a cut-off frequency of 25 MHz [13]. Such cut-off frequency preserves the profile of the signals and reduces high-frequency noises. 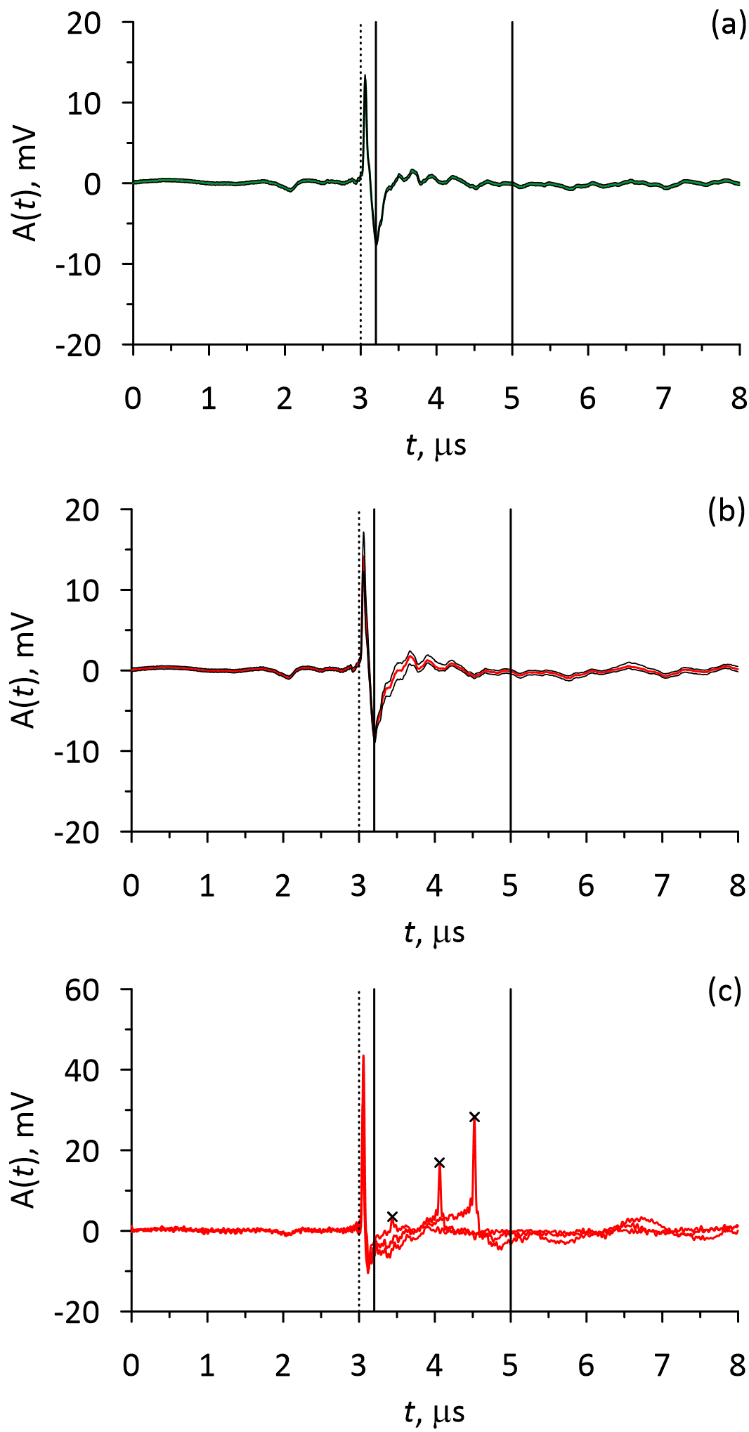 The second approach was based on a calculation of the ensemble average model responses from normal blood cells. The ensemble average response was subtracted from melanoma responses. If the maximal value of the resulting time-series was more than 1.75 mV, then we considered this response to be melanoma-related. From Figure 1, it is evident that all responses from normal cells were rather uniform, so when we subtracted the ensemble average response from other normal blood responses the resulting signals were close to zero. The responses from melanoma cells, however, had prominent second delayed spikes, and the delay was positively correlated with the amplitude of the spike. The signal calculated by subtracting the model response from melanoma responses still contained those spikes, and their amplitudes were higher than 1.75 mV. For brevity, we will refer to such signals as the differential signals.

Another question was choosing which part of the acoustic responses to analyze, or which kind of gating to apply. In the original paper [11] it was advised to use a narrow section around the main spike – 2.9 µs to 3.2 µs. However, we found out that both approaches were more sensitive and selective when using the wide gating that included delayed spikes on melanoma acoustic responses: 2.9-5 ms for calculation of the standard deviation (dashed vertical lines in Figure 1); 3.2-5 ms when using the model-based approach (solid vertical lines in Figure 1), the main spike needed to be excluded because it fluctuated even among the responses from normal cells and negatively effected the sensitivity. 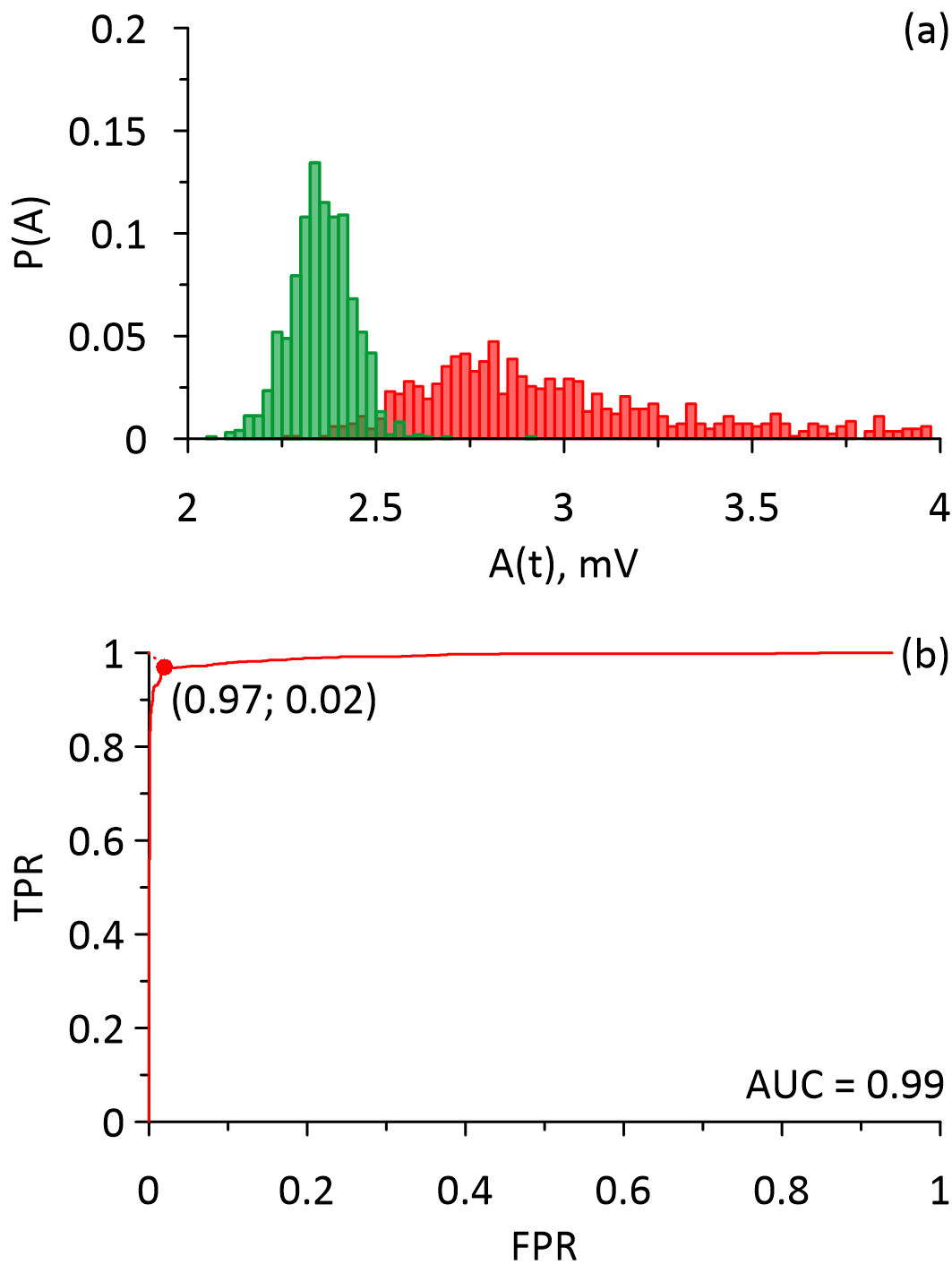 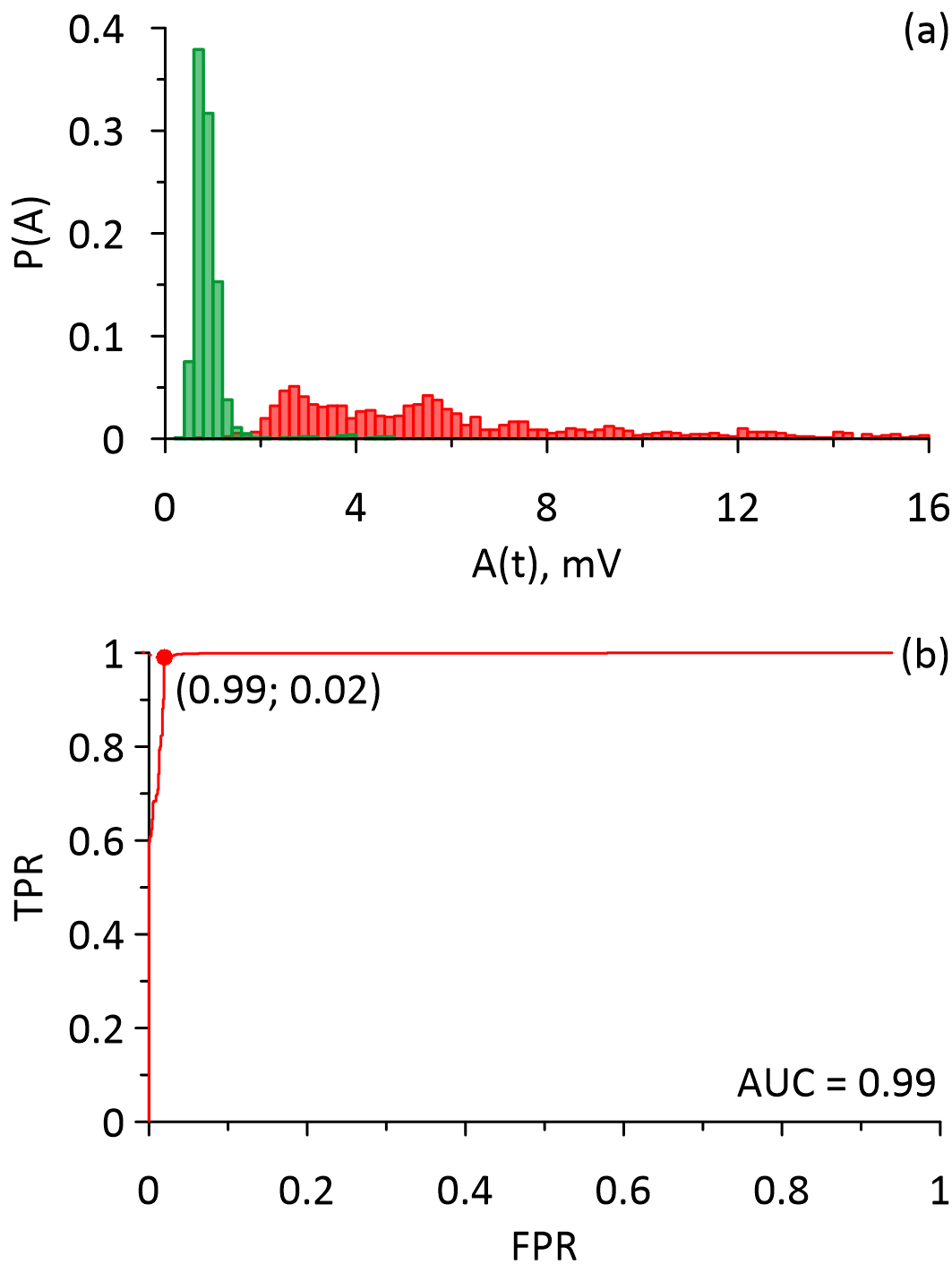 Figure 3. The distributions and the ROC curves that were calculated for the maximal values of the differential signals obtained from the acoustic responses of the circulating melanoma cells (red) and the normal blood cells (green). (a) – the distributions, (b) – the ROC curve.

The melanoma detection algorithm that calculated the standard deviation of the acoustic responses had a very high sensitivity of 97%. However, the model-based technique had a sensitivity of 99%, which made it more appropriate for the analysis of the photoacoustic data, since that approach aims to provide the ability to detect even a single circulating melanoma cell.

Another advantage of using the model-based approach is computational speed, which is very important for the real-time detection of circulating melanoma cells. The model-based algorithm is much simpler since it only calculates the differential signals until they reach the value of 1.75 mV.

It is important to mention that the study included the data from a single mouse and that further studies with larger statistics are needed to confirm the results.

Obtained results suggest that the proposed model-based approach is a more reliable basis for the development of an automated algorithm for the detection of circulating melanoma cells, and has an additional advantage of being simpler to calculate and requires less computational power to run in real-time.

In vivo experiment. Laboratory animals were kept according to the instructions of the Saratov State Medical University (No. 82 dated January 30, 2020). The care protocol does not contradict the international principles of biomedical animal studies of the 1985 Geneva Convention.

The other authors declare that they have no conflict of interest.